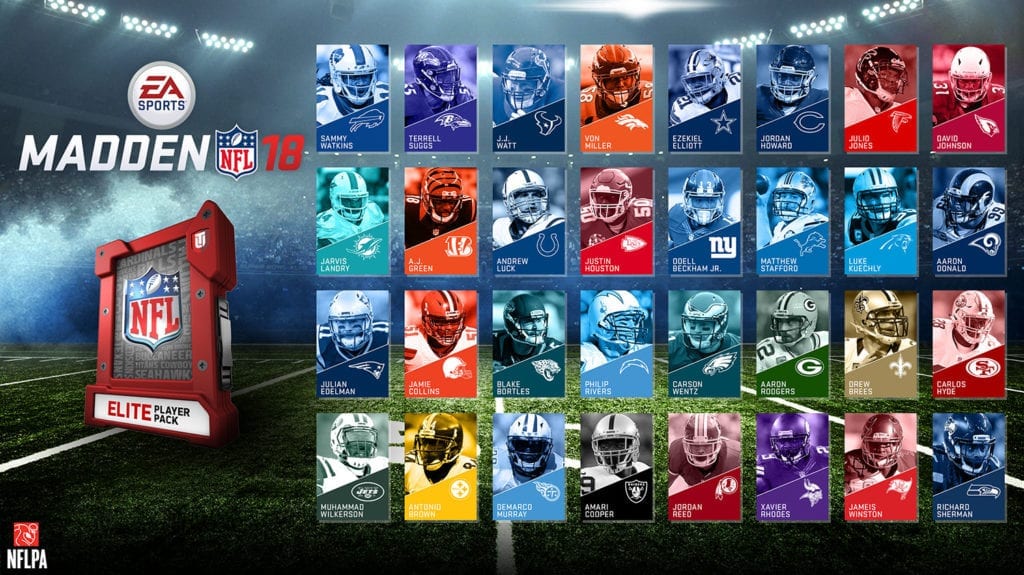 With the recent news about the direction of Madden Ultimate Team in Madden NFL 18, I was left wondering which cards the community was most looking forward to. The clear favorites are the new “elite” cards, which every player will get upon pre-ordering Madden 18. All 32 NFL teams have an elite player, and will include the following players.

Out of all these players listed above, there are quite a few I’d like to build my MUT squad around. At quarterback, Aaron Rodgers, Andrew Luck and Drew Brees stand out above the rest. Rodgers may be the most physically gifted QB in the NFL, and should be the second highest-rated quarterback aside from Madden 18 cover man Tom Brady.0

At wide receiver, Odell Beckham Jr., Antonio Brown and Julio Jones remain the league’s best pass catchers. All three are interchangeable, and would be a significant centerpiece to any MUT team. Each player is a great building block and will be highly sought after this year.

For the hardcore MUT players that want to spend the additional money on the G.O.A.T. Edition of Madden, there are five exclusive legends for you to choose from. These players will be more valuable, and should be held at a higher standard among the MUT community. Being able to start your team with a G.O.A.T. Tom Brady, Jerry Rice, Barry Sanders, Deion Sanders or Ray Lewis is a huge piece for every player to build upon. Each is the “G.O.A.T.” at his respective position and would be well worth the upgrade.

Aside from the obvious choices stated above, the “usual suspects” should continue to be among the most popular throughout the Madden community. In Madden 17, some of the most popular players included Randy Moss, Dont’a Hightower, Jerry Rice, Ricky Williams, Randall Cunningham, Tim Brown, Brian Urlacher and of course Emmitt Smith. There are a ton of players who could be on this list and many will continue to be a priority for users in 2018. Below is a look at players I’m most excited for in Madden 2018.

Like Elliott and Johnson, Bell is one of the best backs in Madden. His vision and big-play ability, primarily as a pass catcher makes him a hot commodity among the MUT community.

Users love mobile quarterbacks, and there’s none more dangerous than Cam Newton. He can beat you with his mobility and even more so with his arm. His accuracy and “deep ball” rating should be off the charts. Newton is a perfect building block for every MUT team.

Very few players in the NFL play with the type of grit Ndamukong Suh does. He’s one of the league’s best run stoppers and has no trouble shedding defenders. He’s a massive anchor in the middle and a huge asset to any team. Suh should once again be a dominant player in Madden.

Speed kills in Madden and Todd Gurley is oozing with speed. He’s a playmaker who should cause nightmares for opposing defenses. With the ability to get to the outside in a hurry, look for Gurley to beat players sideline to sideline, and through the air.

Tight ends can be difficult to cover in Madden and none are more dangerous than Rob Gronkowski. Users love running the dreaded seam route, and no one does it better than Gronk. Despite having injury concerns in real life, he is the best tight end in the league and should be so as well in Madden.

Prescott surprised a lot of people with his poise and understanding of an NFL offense. His mobility makes him a threat on the ground, but most devastating is his ability to pick defenses apart. Dak Prescott should be fun to use in this year’s game.

Arguably the NFL’s top cornerback, Sherman is one of the league’s few shutdown corners. He’s great in press coverage, and succeeds in both man and zone schemes. If you’re able to get a player like Sherman, you do whatever it takes to hang onto him. He’s a truly elite player and a cornerstone of any defense.

Beast mode is back, and while it’s uncertain how he will fair in Oakland, he’s one of the league’s most difficult running backs to tackle. His “break tackle” and “elusiveness” ratings should be off the charts. Add in a monster truck stick, and he’s a running back every user would love to have.

And the list goes on and on and on…

Lastly, I’d love to see a Dan Marino card added in this year’s game. His presence in Madden’s “Longshot” should mean there’s a legit possibility we finally see a Marino MUT card in this year’s installment. The man known as “The Right of Arm of God” would be a huge addition to Madden, and would instantly become a favorite among MUT heads. He may not have the game-changing speed that many users prefer, but he has one of the best arms in NFL history. Please EA, give us a Dan Marino card.

With a new game comes lots of changes, and it’s anyone’s guess as to which players will be the hot commodity once Madden 18 drops. What we do know, however, is EA has spent a significant amount of time with MUT and appears to be putting a lot of stock into co-op play. Time will tell, but this year’s Madden Ultimate Team could be the best yet.

Which players are you most looking forward to obtaining in Madden Ultimate Team? Let us know in the comments.