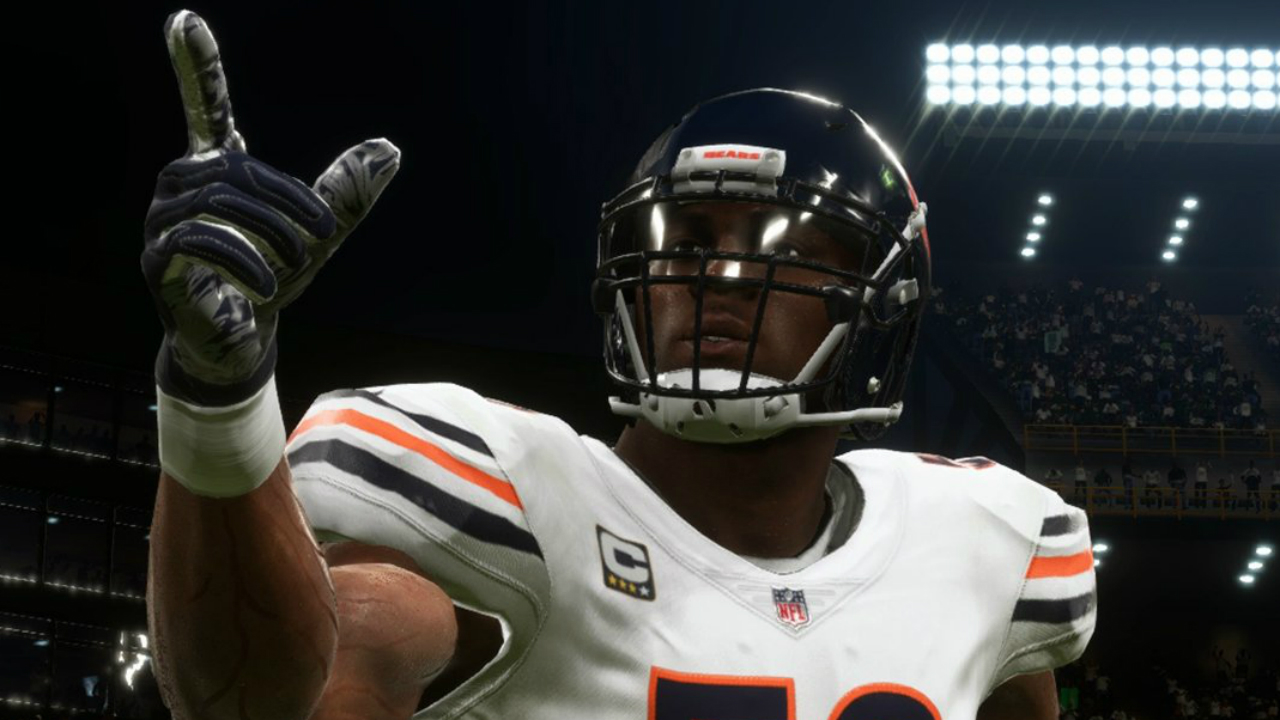 Thanksgiving is a time to get together with friends and family, and enjoy a nice home-cooked meal. However, for some of us, it’s an excuse to stuff ourselves before sitting down in front of the television to watch football. To be honest, watching the NFL’s slate of games has become a family tradition. And aside from the time spent with loved ones and the delicious food, there’s nothing I look forward to more.

So, before you get ready to go spend time with your family and friends, here’s a look at our Madden NFL 20 Turkey Day Simulations. Enjoy. 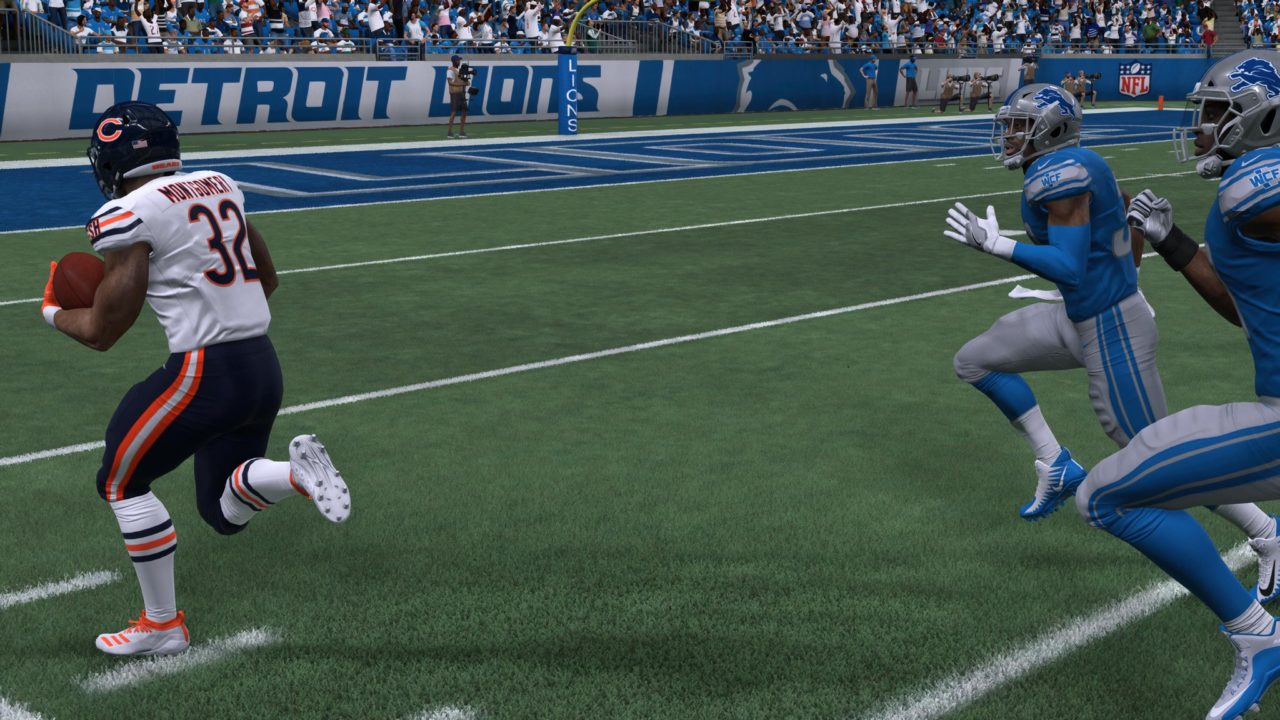 I’m not sure if this was intentional by Madden, but the Jeff Driskel vs. Mitchell Trubisky simulation was one of the worst things I’ve ever sat through — and yes, this was done before David Blough was given the start. All jokes aside, these two teams exchanged punts back and forth for nearly the entire first half. It wasn’t until late in the second quarter when Matt Prater finally got the Lions on the board.

Down 3-0 with under two minutes to go in the first half, the Bears started to orchestrate a respectable drive. With the clock expiring, Trubisky was able to connect with Allen Robinson on a curl route to get the Bears in field goal range. But just like their real-life counterpart, kicker Eddy Pineiro missed the field goal wide right and the score remained 3-0 heading into the half.

The game would be put away midway through the fourth quarter when Montgomery scored on a 15-yard run. In the end, the Lions had no answer for Chicago’s suffocating defense, and Montgomery did enough to put the game out of reach. 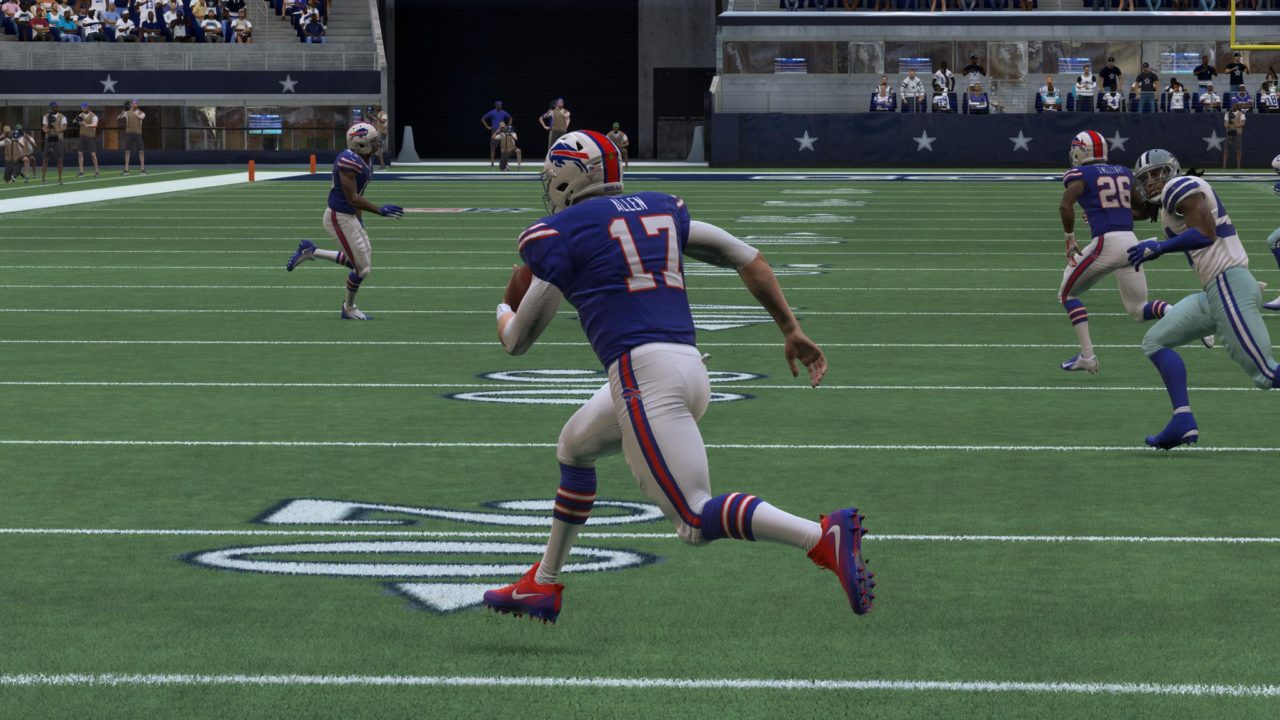 On paper, this is probably the most exciting of the three Thanksgiving Day games to watch, and the Madden 20 simulation did not disappoint. The Bills won the coin toss and elected to receive. On the opening kickoff, the Cowboys raced downfield and put a bone-crushing hit on the Bills return man. Dallas scooped up the loose football and scored on the very first play of the game. Like the taste of warm apple pie, I could tell I was in for a treat.

Both teams would struggle to get anything going offensively, and would exchange punts on their next few possessions. This went back and forth as the first quarter started to come to an end. However, with 1:15 seconds left in the first quarter, the Bills offense finally showed some life. On 2nd and 3 from their own 32-yard line, Josh Allen showed the world why he’s one of the most dangerous dual-threat QBs in all of football. The RPO fooled LB Leighton Vander Esch (another player not healthy enough to go in real life this week), and Allen took off for a 45-yard gain. Three plays later, Devin Singletary took the sweep to the left and scored from 12 yards out. 7-7.

The Dallas offense committed to the run game on their next possession, but they were stopped short of the markers on a key 3rd and 1. And although it appeared the Cowboys should opt to go for it, computer Jason Garrett decided to punt. Both teams would eventually kick a field goal, and we would be all tied up 10-10 at the half.

The third quarter began with a big kick return from Tavon Austin, which put the Cowboys in enemy territory. Ezekiel Elliott would then break free from not one, not two, but three tackles and would score from 47 yards out, giving the Cowboys a 17-10 lead.

Dallas’ defense continued to play hard throughout the third quarter, and after a Bills three and out, Dak Prescott would connect with Amari Cooper on a quick slant for a 67-yard gain. However, Dallas was unable to reach the end zone on this possession and was forced to settle for the field goal. Dallas goes up 20-10.

With time expiring in the third quarter, the Bills put together one of the most impressive drives of the evening. Josh Allen started to feast on Dallas’ secondary, but it was the two-headed monster of Devin Singletary and Frank Gore that moved the football nearly at will. On a 2nd and 6 from the Cowboys 24-yard line, Allen hit former Cowboy Cole Beasley in the end zone for the TD.

The fourth quarter was back and forth with both teams looking to make a game-changing play. With about 4 minutes to go in the fourth, the game swung in Buffalo’s favor. It was 3rd and 9 from the Cowboys’ 42-yard line. Prescott dropped back to pass and didn’t see Ed Oliver running free off the edge. Oliver plastered Prescott and the ball came out. Oliver was then able to recover the fumble and take it to the house for the go-ahead touchdown. 21-20 Bills.

With just over three minutes left in the game, Prescott was once again faced with a critical 3rd and 9. However, this time, he wasn’t going to make the same costly mistake he did on the Cowboys’ last possession. Instead, Dallas called a WR screen, the perfect play to get superstar WR Amari Cooper in space. Cooper broke free of one tackle and took the ball 37 yards for the first down. 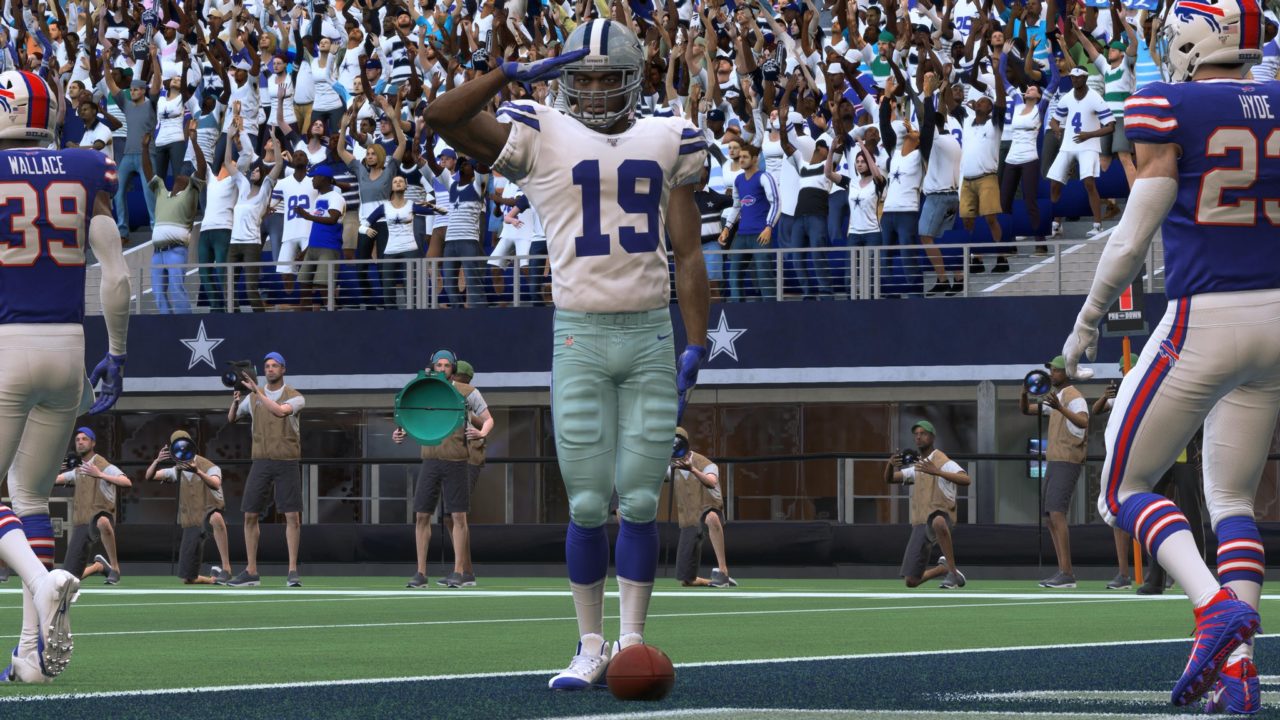 The ball was now in Bills territory with the clock slowly winding down. On a 2nd and 11, Prescott found TE Jason Witten down the seam for a 14-yard gain. Dak hurried to the line and spiked the ball. Three plays later, with the game on the line and under 46 seconds left in the game, the Cowboys made the play of the game.

Prescott dropped back, pump faked left, and then turned and fired a perfect dot to Amari Cooper on the post route for the touchdown. Buffalo had a chance to score, but Josh Allen made a costly mistake trying to force the ball into double coverage and the Cowboys would hang on to win 27-21. 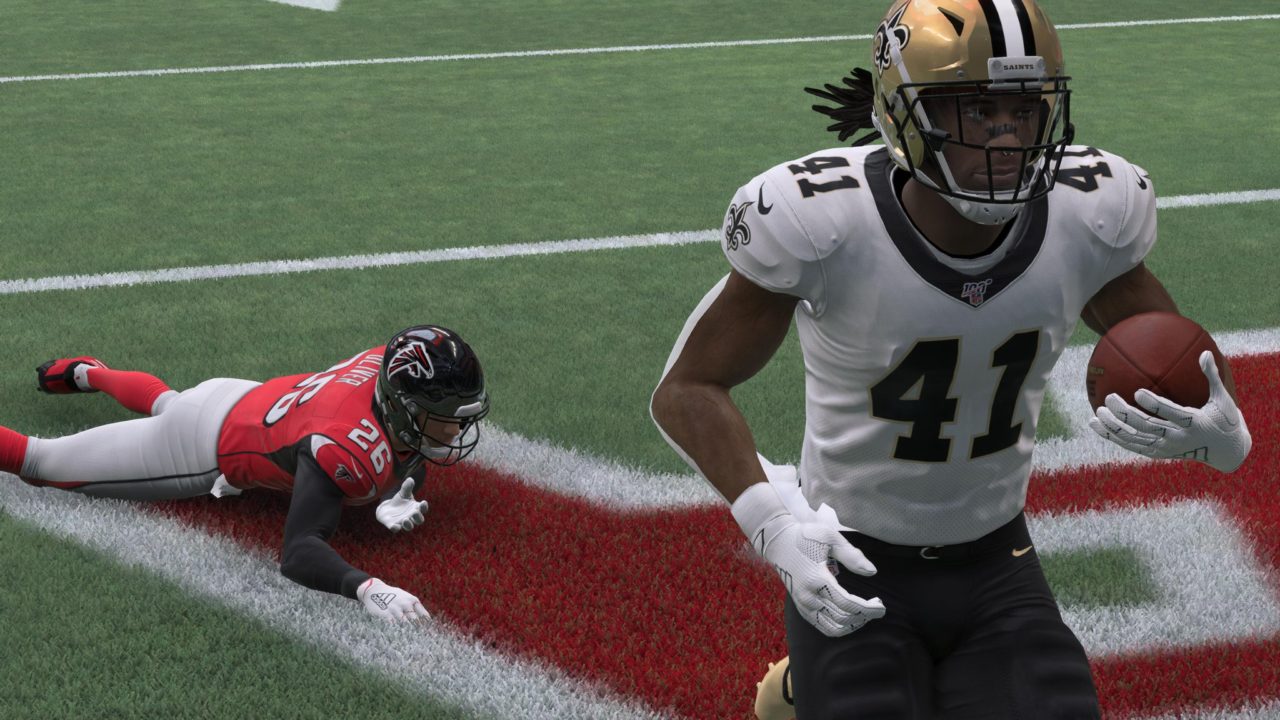 The last game in the Thanksgiving triple header was an NFC South matchup between the New Orleans Saints and the Atlanta Falcons. Earlier in the year, the Falcons bested the Saints. However, this was not the case in our Madden simulation this time around. From the very beginning, the Saints took control of the game as Drew Brees marched the Saints’ offense downfield on their opening possession. The drive was capped off with a 22-yard TD pass on a HB screen to Alvin Kamara.

Atlanta struggled to get anything going for most of the first half. After all, the Saints defense is dominant in Madden, much like they can be in real life. With just under 7 minutes to play in the first half, New Orleans got the ball at their own 42-yard line. The Saints must’ve smelled blood in the water, as the very first play from scrimmage was a play-action pass to Michael Thomas for a 38-yard gain. Several plays later, Latavius Murray would bounce a run to the outside, scoring from 11 yards out to give New Orleans a commanding 14-0 lead.

On Atlanta’s next possession, Brian Hill would take the HB toss and instead of picking up the sure yardage, would try to spin into heavy traffic. New Orleans would force the fumble and return it 25 yards for the touchdown.

Atlanta got the ball to start the second half and things started to look up. They were able to string together one first down after another. However, with their backs against the wall, the Saints defense stayed strong and forced the Falcons to kick the field goal. This would be the only score of the game for Atlanta.

Flash forward to the fourth quarter and New Orleans’ defense continued to make life difficult for Matt Ryan and the Falcons. Two Will Lutz field goals in the fourth quarter sealed the victory for the Saints as they all but clinched the NFC South.