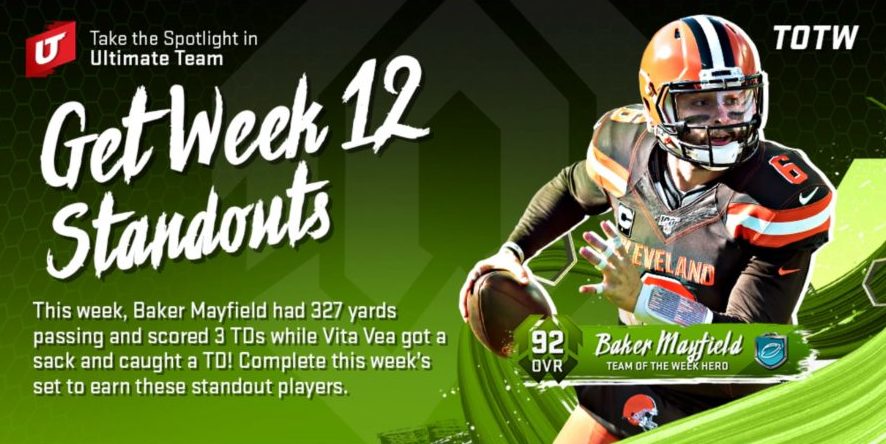 Baker Mayfield and Vita Vea are the Week 12 Heroes in Team of the Week 12. One of those players stands out more than the other, so let’s get to him first…Vita Vea, sit down, I was not talking to you mate. 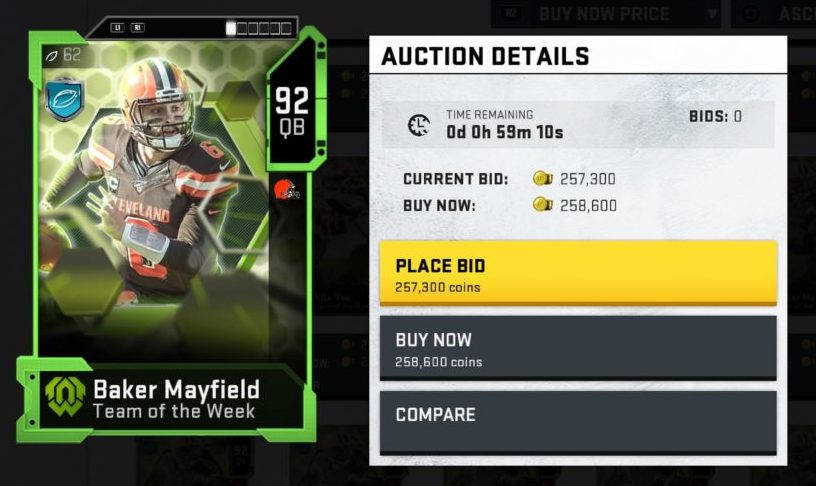 So was Baker Mayfield the most deserving QB considering he was going against the Dolphins and has had a suspect season? No. However, he did start the season as a very popular QB in Madden 20 due to the Solos attached to him, and he is someone who EA probably did want to upgrade. Plus, he still has lots of fans so, hey, I get it.

As for the price, at about 250-270K, he’s an affordable-adjacent 92 overall QB. That being said, he has 79 speed so he does not get Escape Artist, which will immediately DQ him for some folks. He does get 92 throw power, 90 short accuracy, 84 medium accuracy, 87 deep accuracy, 91 throw on the run and 91 throw under pressure. Those are good stats minus the medium accuracy being middling, but without the extra mobility he will still struggle to break into the truly elite.

He should look good on a Browns theme team though, and he’s still probably going to get more upgrades at some point. 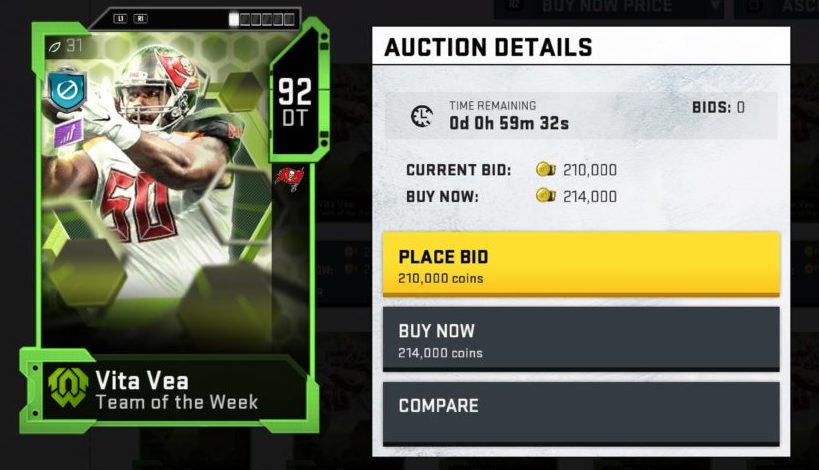 Vea is a bit of an underwhelming DT considering part of the reason he got a card is because he caught a TD pass. He only has 30 catching, not that he’s exactly easy to put in on offense anyway. On defense, he gets 94 power, 96 strength, 88 pursuit, 88 block shedding and 86 tackling. He should be a good run defender with these numbers, especially in a 3-4 system, but he won’t do much to get to the passer.

Here’s the real story of this Team of the Week 12, the LTD Fabian Moreau. Washington now has another elite corner for the theme team, and Moreau does look elite. He gets 93 speed, 92 acceleration, 88 agility, 90 jumping, 88 man coverage, 91 zone coverage, 94 press, 76 catching and 72 tackling. He’s basically going to be able to press receivers at the line with a lot of success, use his speed to stay with the elite receivers, and he even has decent tackling to deal with the run game. At 6-feet tall, this card looks very good and has a 550K+ price tag attached to it for that reason. 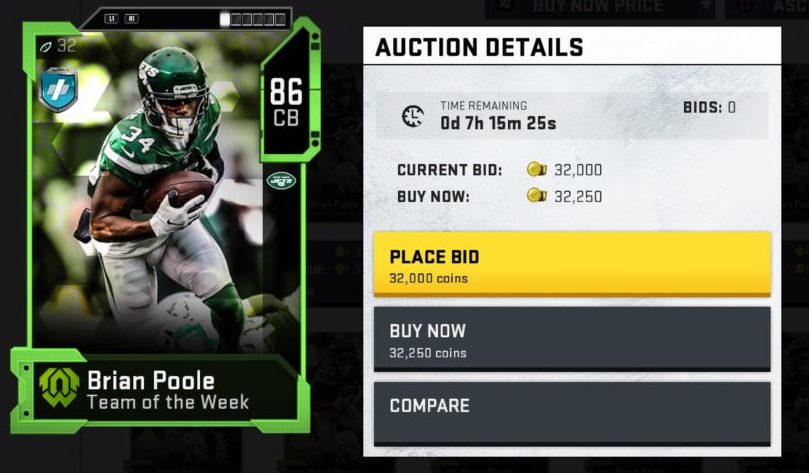 Elsewhere, Brian Poole gets 87 speed, 85 awareness, 85 play recognition and 60 tackling. The card has very middling coverage skills but should be quick enough and stout enough to be somewhat okay in early downs where you’re expecting the run. 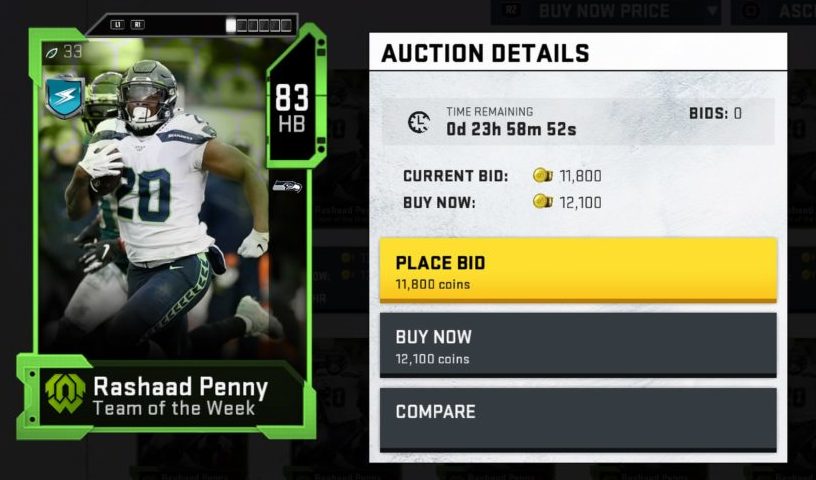 I feel bad for any running back coming out right now considering the NFL 100 just launched last week, and this goes doubly for Penny and Seahawks fans. The Seahawks theme team is still looking for a bit more from running back than this Penny card. He gets 86 speed, but he does not reach any thresholds to really be scary as a lead back, even on the theme team. 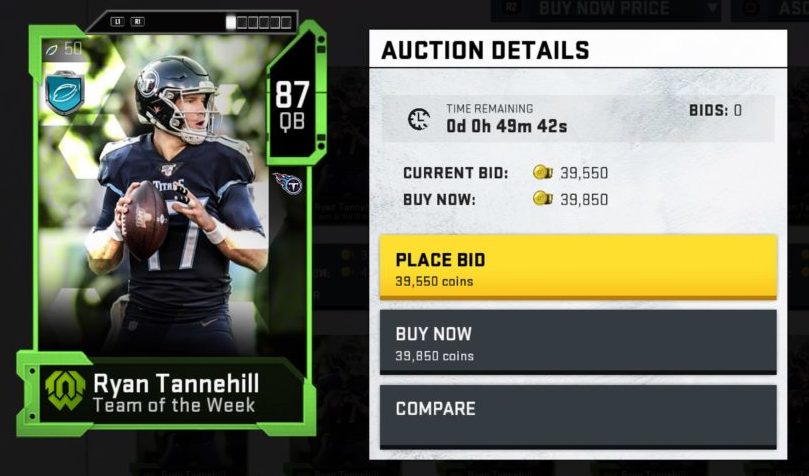 Tannehill is getting a second lease on his QB life in Tennessee, but he also misses out on Escape Artist this time around. He has 79 speed, 88 throw power, 89 short accuracy, 84 medium accuracy, 86 deep accuracy and 85 throw on run. The card is not too wildly different from the Baker Mayfield, but comes with some of the same potential problems. That being said, his price is much more affordable if you want to try him out versus the Mayfield. 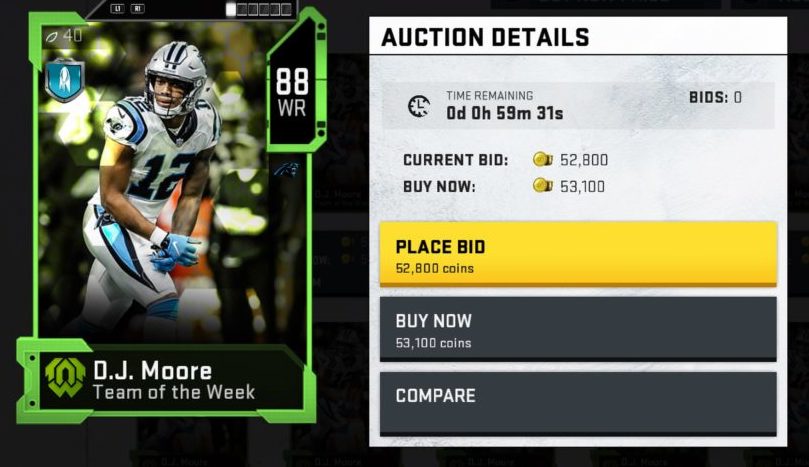 The last card I’ll look at is D.J. Moore. Moore does have another card (Ultimate Kickoff) that is solid already, but this one gets 90 speed, 90 acceleration 89 agility, 86 catching, 85 catch in traffic, 87 spectacular catch. The issue with him is more the release and his overall route running. He’s 5-foot-11 so I think you would want to use him as a slot receiver if possible, but I don’t think he will quite fits that archetype at this point.

That’s all for now, but here’s the full list of players for Team of the Week 12 to sign off: