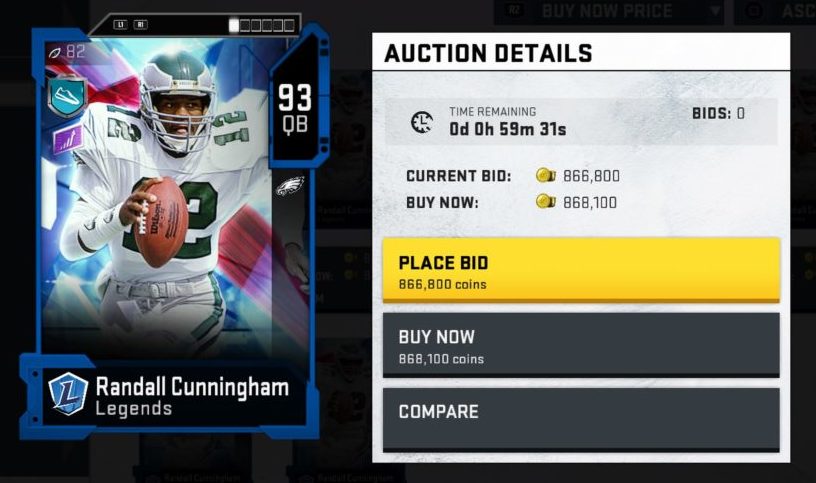 So you like running backs and running the ball? Well, how about a running quarterback.

Randall Cunningham continues the weekend of fan favorites, and he comes into the game as a 93 overall Legend. He has 88 speed, 85 acceleration, 93 throw power, 92 throw on the run, 92 deep accuracy, 88 short accuracy, 88 throw under pressure and 93 break sack. He also has 86 spin move, 85 break tackle, 87 juke and 70 carry. It’s a running QB no question, but the fantastic arm strength also works here with solid accuracy ratings — beyond the 83 medium accuracy.

He is a Scrambler archetype so he can’t get Dashing Deadeye but does get Escape Artist. I also don’t want to overlook the medium accuracy being 83 as it is a big deal. His throw under pressure is solid at 88 but there is some likelihood he’s going to miss some key throws in big situations with that accuracy. Of course, you have to take some of the bad with the good here, and his mobility obviously adds to his appeal.

In comparison to Vick, Cunningham has lower acceleration, but otherwise has him beat as a runner. He also beats him in every way as a passer, and they have the same medium accuracy ratings. It’s a lefty vs. a righty, but at least in terms of ratings the 93 Cunningham does have the base 92 Vick beat. It’s also worth considering the way each throws, so the speed of their releases could make up a difference here as well — testing is always recommended now when it comes to that element as it’s hugely important.

Cunningham has team themes with Philadelphia, Dallas and Minnesota. He is also incredibly expensive right now, so I imagine that price will fall a bit. 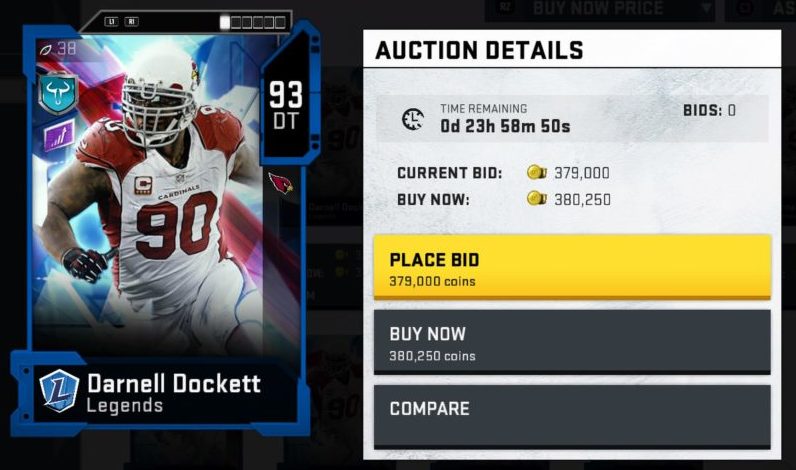 Darnell Dockett is the other Legend, and he should not be overlooked — it’s on me that I have done just that so far. He looks like a near-perfect defensive tackle for the run meta — even if he only has a Cardinals theme team. He has 75 speed, 90 awareness, 90 play recognition, 91 strength, 91 block shed, 86 pursuit and 89 tackling. These are incredibly good ratings to go with 91 power moves as well.

He won’t fit into 3-4 schemes as well as 4-3, which does hurt since 3-4 Odd is one of the formations used by many to slow down the run game. Regardless, this is a great looking DT, and I would not be surprised to see him sneak into a whole bunch of high-end lineups.