Madden NFL 20 MUT introduced the second batch of NFL 100 legends during the ongoing Blitz promo. The reveals in this batch of legends were Bobby Bell, Deacon Jones, Alan Page and Lawrence Taylor. MUT fans are already very familiar with some of these names, but let’s look at these four monsters from football lore a little more closely. 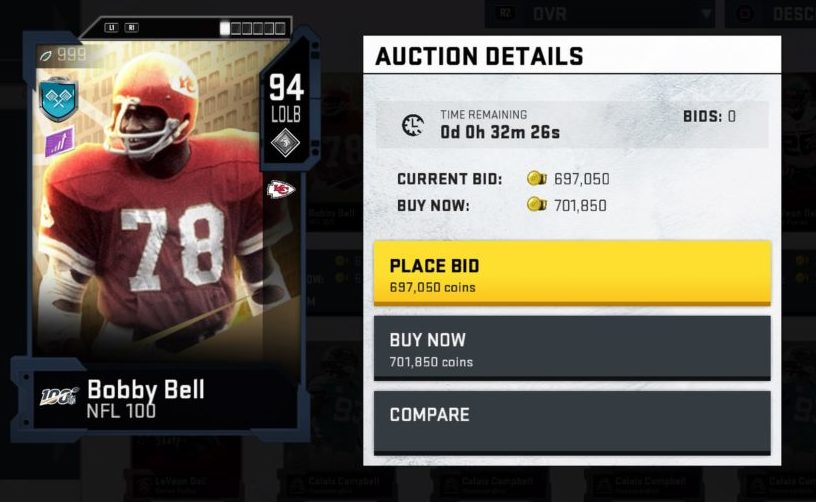 Starting with Bobby Bell, Chiefs fans have to be excited to finally be represented by one of their all-time linebackers. He is a pass coverage archetype with 85 speed, 89 acceleration, 86 agility, 85 strength, 87 jumping, 92 awareness, 92 play recognition, 86 block shed, 89 pursuit, 92 tackling, 90 power, 83 finesse move, 85 zone coverage, 77 man coverage and 73 catching.

Bell looks like he will be versatile but probably not the most popular player from this batch of legends. He’s very good all around, but his speed is not top end, and he’s not going to be amazing in in halting the run game. However, you can move him between defensive line and linebacker with ease, he’s going to be solid in coverage, he’s not useless as a pass rusher, and he can get a bunch of quality pass coverage abilities added at the three tiers. He may not be what the majority of people are looking for at OLB, but he’s deserving of the 94 overall. 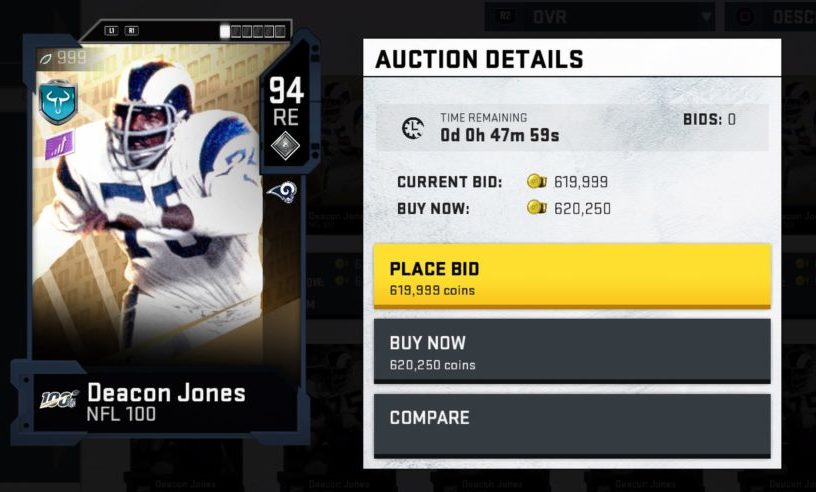 Jones is a power rusher archetype, but this will probably be the least popular player from this batch. He just does not have overwhelming stats, and he’s not fast enough to really play outside linebacker to take advantage of the power he would have there. He should be strong against the run in a general sense, and maybe he was built in a way to make him strong against the run by bullying offensive linemen, but he does not have that versatility you want in such a high-rated player. These are supposed to be the best players in the game right now, and I don’t think Jones quite reaches that level. 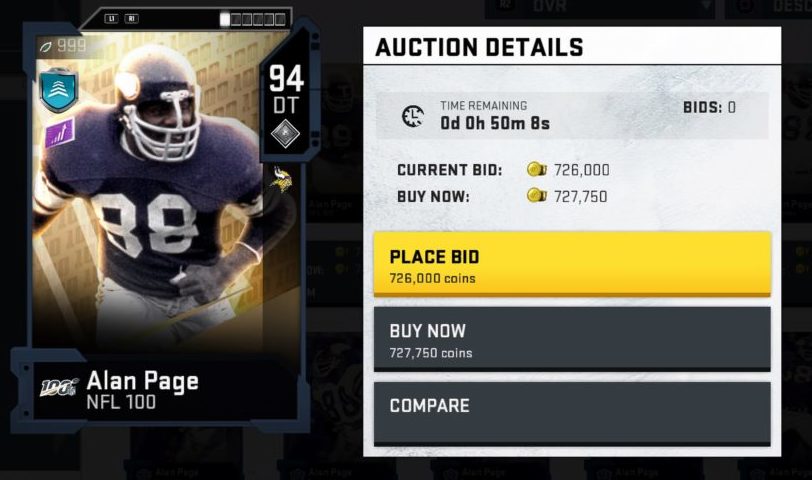 Alan Page is another player who MUT players have already had the chance to use this year. This version is a speed rusher archetype with 82 speed, 87 acceleration, 76 agility, 89 strength, 89 jumping, 91 awareness, 91 play recognition, 89 block shed, 92 pursuit, 89 tackling, 89 power, 86 power moves and 91 finesse moves.

Page should provide the sort of versatility that I don’t think Deacon Jones can right now. He’s got solid speed for a DT, good enough to play defensive end if you need him to. On top of that, he’s more of a 4-3 DT, but his stats are good enough overall that he won’t be ruined in a 3-4 scheme. He could get bullied at times in the run game within a 3-4 system, but I think overall he has good enough mobility and block shed to remain an issue for offenses. As a pass rusher, he’s going to be very good no matter what scheme he plays in with these ratings and abilities.

There he is. LT was super busted in MUT last year, and he’s back again this year to cause chaos once more. He was already in the game in a weaker form, but now this version is the clear champion. His ratings are different from last year — see: worse in some respects — but that’s mitigated by the quality of abilities he can get as a power rusher archetype.

So LT will be good enough to go between end and linebacker, and his overall speed is insane. If you don’t double team him, he’s basically going to win out on every pass rush and get to the QB, so he’s an immediate problem when activated as one of your superstars. He’s not going to be any help in coverage so that probably keeps him purely as a push rusher. But hey, that’s fine, just send him every play. Taylor is once again going to be a problem and becomes one of the best players in MUT once again. 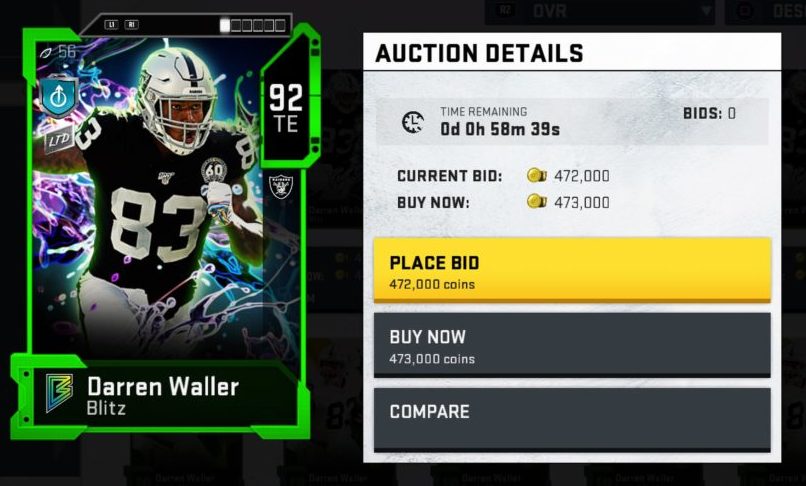 Beyond the NFL 100, there is one new Limited card that released at midnight for the Blitz promo, and it will be active until midnight tonight: Darren Waller.

He’s a vertical threat archetype with very good speed, and should in theory be someone who goes up to get 50/50 balls due to his 94 spectacular catch. However, his catching is not quite top tier, he’s a bad blocker overall, and isn’t a good route runner. So I think this is one of those cards who will need to be tested to really get a handle on understanding. Is his speed so overwhelming that it makes up for the other so-so attributes? If you run a lot, I think Waller is automatically out of your plans, but he’s really worth experimenting with in heavy-passing schemes.

Catching up quickly on two other cards released yesterday, we got the usual duo of Veterans. 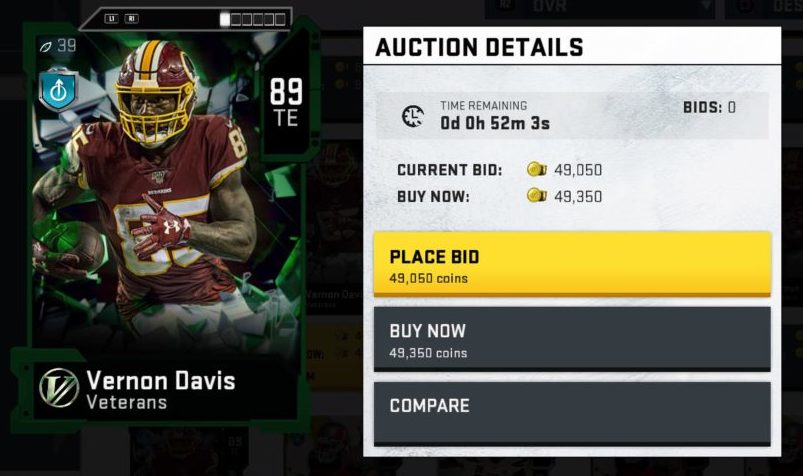 Following right after talking about Waller, this card comes off as disappointing. You’re not getting prime Davis, which means you don’t get the elite speed, and he’s not a great blocker or exceptional route runner. So beyond the theme teams, I don’t see much appeal here. 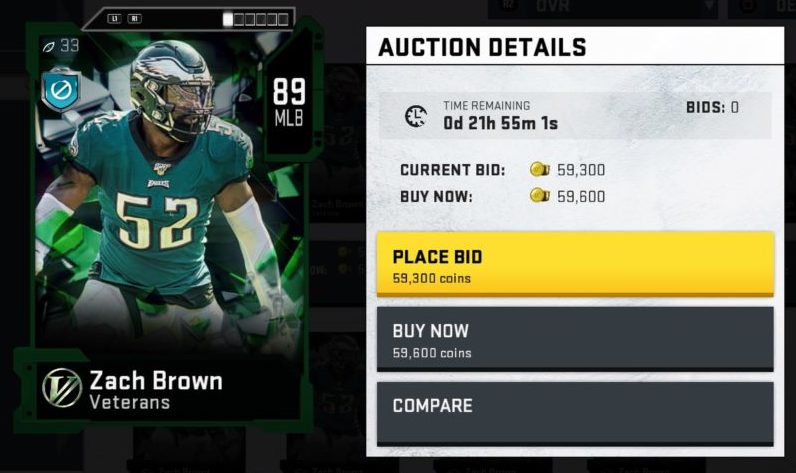 Brown is every bit the run stopper archetype he’s listed as in that you definitely don’t want him out in coverage. That being said, he’s going to have a place on theme teams, and his run defense is very strong for the overall rating. This looks like the stronger of the two Veterans released.