The Blitz promo includes 18 known players who will be released between 11/28 and 12/2. It also includes two known Masters, and then two Limiteds have also been released so far — with more to come most likely.

We will start with the two Masters, and then go into the cards based on when they will be released.

It’s simultaneously underwhelming and intriguing all at once to me. His overall speed beats out even base Vick and Cunningham, but his throw power is only 88. He can get Escape Artist, but his accuracy on everything but short throws is a little weak. His moves in the open field will be great, but this is still Madden so you still have to be worried about getting hit and fumbling.

Basically, the positives and negatives both really shine through on the MVP front-runner, and that’s fine, but it’s tough to feel super confident in him beating out Vick or Cunningham right now.

Look, it’s a good card. It’s a very good card. But we just got littered with unreal NFL 100 running backs last weekend, so this comes off as a letdown. CJ2K is an all-time Madden favorite so he has that cache going for him, but it’s hard to not see these ratings and immediately compare him to Barry Sanders. This is a problem you always run into with any card-collecting mode each season, but the timing makes this especially awkward because it doesn’t feel like the hard work to get the CJ2K Master is even worth doing when NFL 100 RBs are out there right now and fresh in everyone’s mind.

That being said, yes, CJ has top-end speed — +1 faster than even Sanders — but he’s not as quick as Sanders and won’t be quite as shifty either.

We start firmly in the team theme territory, and even then it’s a hit-or-miss proposition. His main stats are 83 speed, 75 strength, 89 pursuit, 88 tackling, 86 power, 80 play recognition, 84 power moves and 74 finesse moves.

Winovich does have very good mobility, and does work in a 4-3 scheme, but his speed is a little misleading. He could use better agility to really stand out more, and he’s going to get bullied by elite tackles. In a more pass-heavy system where you spy and contain in more ways than to just stop Dashing Deadeye or Escape Artist he could be better, but that’s not the case here.

Andrews does have some below average agility, but otherwise he’s relatively athletic. He won’t be able to leap over everyone, but is 6-foot-5 and won’t be out of place either pass blocking or run blocking. In a perfect world, maybe his run blocking is a little better rather than the pass blocking, and this card does not reach to the level of a Series Redux Kittle or anything like that, but this is a very solid tight end.

This Ross card is a bit of a tease because he has some really good speed and overall athleticism, but he may not actually be a great receiver. His deep route running is good and his release is not bad so he can still be a deep threat, but I don’t trust his catching or general skills. That being said, he should be a good budget receiver as a deep threat and even maybe on special teams. Also, he’s an easy sell on a Bengals theme team that will take any good players it can get right now.

With Callahan, it’s awkward because the Broncos already have awesome cornerbacks for their theme team, and he also could use one or two more points on his speed rating at this point to fit in with a lot of the new best players. His coverage stats are also relatively weak. He may be decent in the run game though as he does have decent strength, and he’s got good awareness to snuff out plays when they’re called.

I really like this card. He’s going to be good on the Raiders theme team, and he’s also just a nice looking card if you want to play close to the line. His speed is minimum 90, and while the agility rating stinks, he can get in the box and still get back into the secondary and deal with all but the top-tier receivers. His tackling isn’t amazing but it’s good for that position. All that being said, you’re going to want to user with this card because the coverage ratings won’t stand up otherwise.

First off, a reminder that if you have Murray or any of the other Rookie Premiere card who got boosted, those cards will now have upgraded stats. Now, they don’t get the added ability slots that the new versions get, but you at least get the better base ratings.

Murray is going to be able to get Escape Artist, but the stats on this card are a little underwhelming. The top-end speed is elite, but he’s going to struggle when under pressure, and so I think he still ends up behind the Vicks and Cunninghams of the world so far. The base throw power also isn’t quite up to snuff. He’s still an obvious good time on Cardinals theme teams though.

It goes without saying that after the NFL 100, any running back like this is purely for theme teams or budget teams. That being said, this card is not bad. The base speed would be good in a pre-NFL 100 world, and he should be a relatively shifty back. I imagine he will also be cheap as well.

This is another one of those cards that would look better in a different meta. He could be a very potent pass rusher, and he still can be that, but he might get muscled too often on running downs. That being said, he still forms a nice trio on a Jaguars defensive line with Calais Campbell and John Henderson. He also has the ability to be an outside linebacker if you want to use his speed and pass rushing skills that way.

This is going to be a fun card. He’s got really good speed for a defensive tackle, and while his strength means he’s 100 percent a 4-3 DT, he’s going to fill that role quite well. Again, the caveats with the run game apply, but he’s going to be able to put a lot of heat on the QB if he gets through, and he’s fast enough to deal with QBs who try to scramble up through the middle of the line. I like this card.

This card is just short of being elite as his Pass Coverage archetype means he can’t quite be chem’d up far enough overall-wise to get Lurker — a great user ability — but will still be fun to use if you like usering as an MLB. This is another card who will excel more going sideline to sideline rather than getting into the trenches, but that’s again more on the developers for allowing this meta to be so run heavy rather than on the player itself. Even without Lurker, Jaylon Smith will be able to deal with a lot of passes thrown over the middle as well with that 86 jumping.

This is a saucy card, but basically a lot of what I said about Jaylon Smith applies here once again, except now he’s an OLB rather than an MLB. He’ll get to the QB, and he’s going to be fun to user with play to play, but I do have some concerns about his ability going against big formations.

This is another one of those cards who will be just below the best receivers because he can’t quite be chem’d up to unreal status as of now. That being said, he can get Grab-N-Go and his base card is very fast, albeit the agility is a little lacking. He’s also going to be a dangerous threat after the catch, and overall this looks like a slam dunk for a Jets theme team.

The MUT team has been handing out a wide variety of rather awesome cornerbacks lately, but the poor old Vikings have not been graced with any lately, which is a shame because elsewhere the defense is rather strong. That changes somewhat with Waynes, but he’s not elite in normal formats. Still, he has the sort of speed you must have to be a top-tier CB in this game, he just doesn’t have the coverage skills to perhaps keep up if he can’t jam a receiver at the line.

Lane Johnson already has a lot of fans even before he’s released, and it’s understandable. He becomes the top-rated RT at a base-level (tied with Ryan Ramczyk), and his speed really stands out for a tackle. Again, the run meta is here to stay for now, and having someone who can really move his butt on these stretch plays while still holding up in every situation is key. Tackles are also incredibly important in Madden — as they are in real football — so getting a new elite one will always stand out in MUT.

This is the best card in the promo in terms of stats and how he fits into the overall scheme of MUT right now.

Speed is the name of the game with Baker. He’s an interesting one in that he’s a good tackler, and he will be able to go sideline to sideline, but he’s more a clean-up guy than a dude who is going to blow up plays. Baker is the guy you hope does not get blocked so he can get to the edge and stomp out outside runs before they get dangerous.

A fun little card who is going to be solid in man or zone, though obviously zone is the big one there more times than not. He has very good base speed for FS, and I see this as a very usable card, especially in a user’s hands.

As a huge Metcalf fan, I selfishly want a little more out of this card. That being said, Metcalf is one of those players who will be a Madden legend in a couple years, and this is by no means bad for an 89 overall. It’s a bit of a funny card in that you almost want to throw it to him more in traffic, and his release is good enough that he’s going to be able to go deep and leap with corners and safeties for 50/50 balls. All in all, not a bad card, but he will get better ones down the line.

Much like the CJ2K Master, this is an odd card to end the promo with, but I get that they could not make Cook better because then CJ is no longer the obvious Master. That being said, this is underwhelming once again in a post-NFL 100 world. Again, the problem with releasing the NFL 100 running backs followed so closely by Cook and CJ is there’s no excitement to getting these two — beyond the theme team aspect. The Madden developers could have planned this a little better to maximize excitement. Nevertheless, this is a solid RB, but it’s just not top tier. 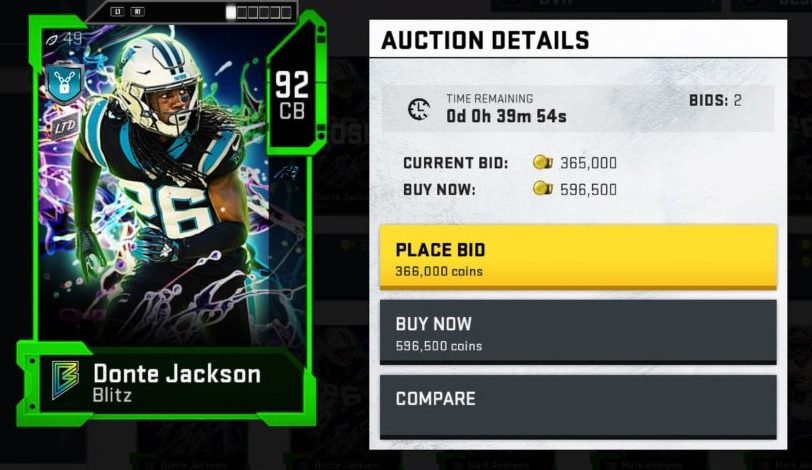 This looks like a solid LTD card. He has the top-end speed needed and the man coverage stats will hold up as well. Lastly, his press rating is good enough to fit into that element of things as well. The zone coverage is not great but you can’t have everything in a base 92 overall.

Holy physical attributes. He’s 5-foot-9, and so really all you want to do with Brown is get him the ball in short-yardage situations and hope he can run in a straight line really fast. He’s going to get jammed at the line and I question his deep-ball credentials, but as an 86 he does have a place in a budget offense because you can’t find speed like his easily.