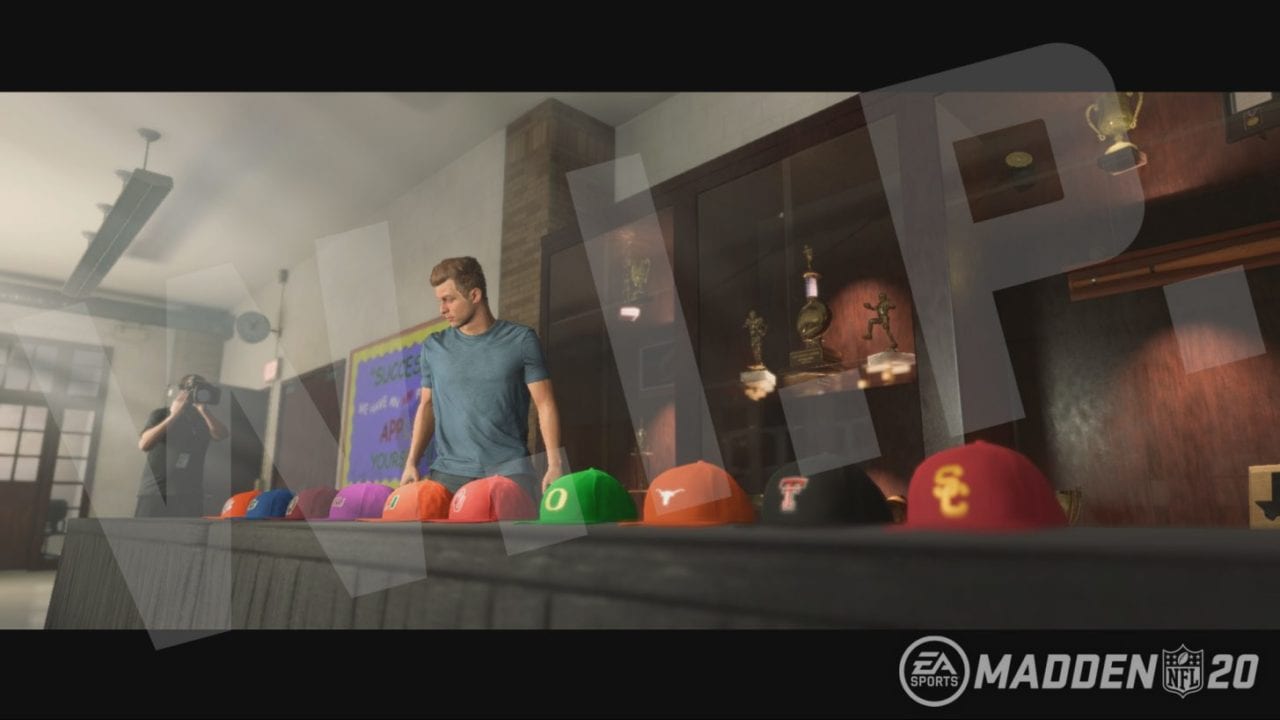 EA recently posted another Gridiron Notes, walking users through the Face of the Franchise: QB1 process in Madden NFL 20.

After choosing one of the 10 Division 1 schools you want to play for, you’ll see your own unique backstory, showing off your history as a football player. After that, you begin the process of editing your face. Unfortunately, you can’t scan your face into the game, but there are quite a few basic and advanced features in the editing process to get the look you want.

Next up is your voice, where you can choose from 3 options, then it’s off to choose from 1 of 4 archetypes (Improvisor, Field General, Strong Arm, and Scrambler). After being introduced as the quarterback during pre-game warmups, you get to loosen up your arm with some passing drills, before the big game.

After completing the College Football Playoff, it’s time to get ready for the NFL with the Combine and Draft. Read more about the Face of the Franchise: QB1 process in the Gridiron Notes.

The development team also provided some additional franchise mode details, as they answered some community questions.

1. Is Ratings Spread a Franchise mode thing only?

Ratings Spread will apply to other areas of the game, namely rosters in Exhibition. It will not impact Madden Ultimate Team.

2. Can you provide more detail about the Scenario Engine and what “help for those struggling in their career” means?

Users will not experience the Scenario Engine during a football game. We will not impact gameplay because someone is struggling during a game. We want Franchise mode to be more challenging for users that are performing well. Here is an example: You’re going into a boss battle against an opposing X-Factor. If your record is above .600, you will not gain as much XP for beating that boss as you would if you had a worse winning percentage. The thinking here is that we see a bunch of users dominate their offline franchise year over year. They don’t need extra XP to continue to dominate, but then you have people on the other side who are struggling to win any games, so we wanted to give them opportunities to win better rewards if they’re already struggling.

3. Is there a difference in single user/multi-user franchises when it comes to the Pro Bowl?

4. Can you use your QB from Face of the Franchise: QB1 in MUT?

No, this is a Franchise mode specific experience only.

5. Is the Scenario Engine taking over for Frostbite, or are they different things totally?

Completely different things. The Scenario Engine is a way to create story lines within Franchise mode, whereas Frostbite is a game engine.

6. Will the bigger spread in ratings actually be meaningful and lead to more variety in team overall ratings? Furthermore, how does this affect sim stats?

Yes, the bigger spread in ratings will impact team OVR ratings. Simulation takes into account all ratings, but it’s also comparing it against the players you’re going up against.

7. On contracts, I can’t help but wonder if the effort on making initial contracts more realistic was part of a larger effort to better model the finances part of managing an NFL lineup?

Yes, we want to make free agency more meaningful. We want tougher decisions in team building. The entire point of team building, and free agency, is to have a good enough payoff when you acquire a player, and if it’s too easy then that payoff is diminished. By adding the contracts, we were able to make these moments mean more because you have to make selective choices on your team building direction. Which is something we’ve never had before.

8. The draft is always going to be something that needs work in Madden in some way, but I’m wondering how annoying it’s going to be to have to wait to find out a player’s development trait?

You get a payoff knowing that you have someone special. You will know they have an X-Factor or Superstar ability because you will see a hidden dev ability on their player card and on the lineup screen you will see the golden background to signify that this player has an abilities dev trait. You will know immediately this will be someone that can be a game-changing player for you. This player won’t have access to his X-Factor/Superstar abilities until they reach the downs threshold.