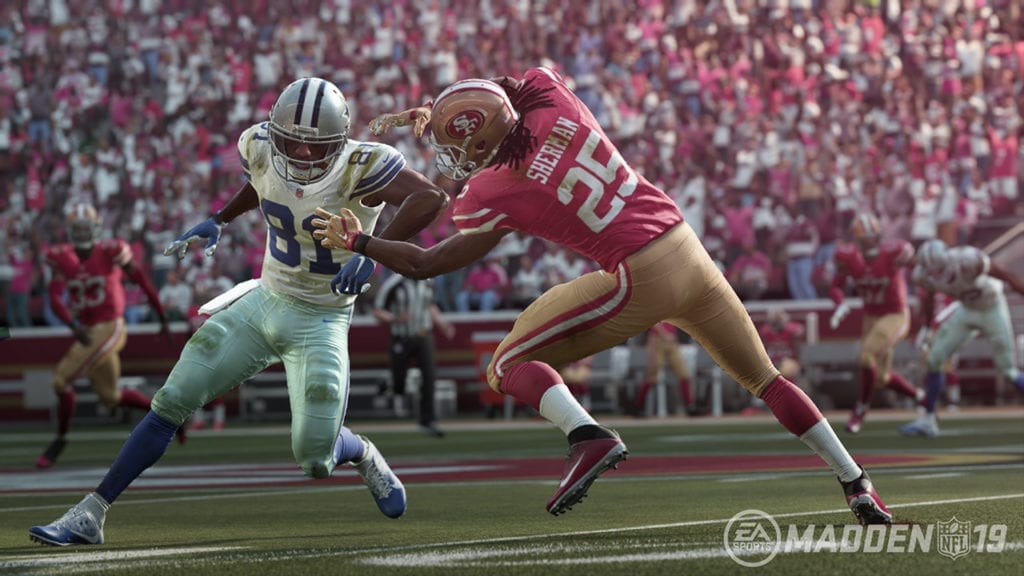 With E3 and EA Play just around the corner (and with EA dropping the first bit of new info about Madden 19), we’re rapidly approaching Madden season. The sports juggernaut is gearing up for another release and that has the community buzzing. Each year, Madden’s release date is a pseudo-holiday with gamers conveniently becoming sick or cashing in some vacation hours. Madden NFL 18 was a good, if not flawed, game of football that had some clever ideas, new gameplay implementations, and a shiny interactive story mode. Not everything was received well and some things didn’t work as advertised but with the team at EA hard at work on Madden NFL 19, I’m curious to see what changes are under the hood at EA Play. Here are a few things that we should expect, could possibly see, and some things that we dare not hope for but still wish for anyway.

What We Should Expect

1. Improved Interaction Mechanics: Last year, Madden NFL 18 was released with a couple of new gameplay systems: WR/DB interactions, and new offensive line logic. Both enhanced the experience to a degree but were clearly something that would really come into its own after a bit of iteration. It was nice to see jump ball battles but there were still some wonky animations, physics that didn’t work quite right, and a press system that was a bit too big of a dice roll. The offensive line logic also saw improvements that presented new issues. Run blocking was very hit or miss and pass protection, while better, was still predicated on who won at a single moment.

More organic battles between offensive and defensive lines would be welcome, and having the blockers follow through and hold a block would be really helpful towards enhancing the realism in the trenches. Much like the new blocking system, the WR/DB interactions need to be tuned for a more realistic representation of the battle between offense and defense. An extra development cycle should bring more realism to the experience, and this year we should see a much bigger distinction between simulation, competitive, and arcade play styles. Already, we’ve seen a few nuggets of information on how players will move and how backs can now get through the line with ease which ,alongside last year’s mechanics getting love, should inch the game closer to being a better representation of what we see on Sundays.

2. Real Player Motion and Hitting the Hole : I expect the new gameplay mechanics announced alongside the Hall of Fame Terrell Owens edition of the game to be present in some way at EA Play. Whether still being tweaked and tuned (likely) or whether it’s close to the finished product, being able to hit the hole, push the pile, and Real Player Motion technology really could fundamentally change the game. Hopefully the days of the “O-line butt” tackle or the “I tripped on my WR’s foot” tackles are over. Responsiveness is always a good thing and while EA has already stated that Madden NFL 19 will be more responsive than ever, seeing it up close and personal will make it more clear on just how much that has changed.

The one area of concern is how often and how automated will these mechanics be? Madden NFL 17 introduced the controversial aggressive catch and unfortunately was plagued by every receiver in the game going up like OBJ and snagging one-handers. It was toned down in Madden NFL 18 but it seems that new mechanics are typically a bit too present in the its first year in the game. While not as big a concern for RPM since every play features players running, things like pushing the pile shouldn’t happen in every goal line situation.

3. Longshot Part 2: Last year, Longshot was introduced in Madden NFL 18. This single-player story was the first of its kind in an NFL game and was Madden’s version of The Journey from the FIFA series. Following the story of Devin Wade, Colt Cruise and company was a mixed bag. While brilliantly acted and crafting an interesting narrative, the actual mode itself was more an interactive movie than a gameplay mode. The result was something that players ended up watching more so than playing and unfortunately that meant it had little replay value. We didn’t even get to see Wade and Colt play in the NFL, instead having to use their MUT cards to get a feel for them in the game.

While having Madden Ultimate Team rewards were really cool, Longshot really needs to get closer to The Journey in terms of gameplay. In FIFA, the Journey follows Alex Hunter’s journey and players actually play full games of soccer amidst a well-paced story. Longshot needs to follow this formula if it wants to engage players fully within the mode. It needs to let us follow Wade through practices, games, and his off-the-field life. Provided that it returns, I expect Longshot to be a much more fully fleshed out mode.

What We Could Possibly See

1. More Gameplay Videos From EA Play and E3: While not a requirement of EA, showing off gameplay for Madden NFL 19 would help alleviate some of the post-E3 negativity on social media that Madden NFL 18 got last year. After the last EA Play, various YouTubers and community members endlessly broke down shaky bootleg footage from the event and picked the game apart. Despite not being a finished product, every wonky animation, every bug, every questionable play was met with disdain and soured many casual players on the game before it was even released. The EA team was unable to get out in front of this and spent far too much time doing damage control on the negativity being strewn about.

This year, it seems the team has already been more transparent. Senior Producer Alex Guerrero is doing interviews, EA has posted a timeline for new deep dive blogs, and the information seems to be rolling out on a regular basis. This is all a positive change from EA and will help to get the community on board with the game. Still, gameplay videos will be critical to maintain the goodwill and momentum. Unfortunately, the player base is hungry for as much information as possible and without visual information to go along with blog posts, speculation can again run rampant. I expect, however, that EA will release more gameplay videos for Madden NFL 19 than they did last year.

2. More Franchise Mode Information: Relegated to a small snippet, it was announced that custom draft classes were being brought back this year. It’s a small, yet vital bone to throw to hardcore franchise players and allows for long running franchises to include real draft classes into the game. Along with that, there has been a change to how offensive and defensive schemes will work and how players will progress throughout franchise. How those will be implemented remains to be seen but it should be a welcome change. Finally, in the MUT deep dive blog, expanded player roles were revealed. Now slot receivers or edge rushers can be accounted for as a position in the depth chart. While this last update hasn’t been confirmed for franchise mode, it would be a safe assumption to see it included.

The franchise blog is scheduled for the week of June 11, so while it’s not overly likely that we get more information on the mode before then, they’ve already released some features that the game will have. Interviews are likely for the event and depending on how forthcoming the team is, we may get one or two tidbits before the franchise blog is released. Much like years past, the most anticipated franchise tweaks are having pre, post, and halftime shows, being able to hire and fire coordinators, more immersion in the mode, better postseason presentation, among other things.

3. More on the Continued Evolution of Ultimate Team: Love it or hate it, MUT is an insanely popular (and profitable) mode. EA just released a deep dive into Madden Ultimate team and the information is extensive and exciting. Changes to team chemistry, being able to play MUT Squads against the CPU in solo challenges, and changes to the powered up player upgrade system are all big changes. The solo battles leaderboard is also another way that players can earn bragging rights in Ultimate Team as there are 14 different reward tiers and 13 different games to be played each week. Each game can only be played once (no restarts) and, depending on difficulty, battle points earned can gain multipliers. Perhaps the coolest part of solo battles is that players will be put up against CPU teams based on real-life MUT teams from other users. It’s all a good step towards refreshing a mode that has been growing a bit long in the tooth.

Beyond that, tweaks to modes like Draft Champions would be welcomed, particularly in regards to having to pay to play. In light of EA’s struggle with the loot box controversy and the recent news that Battlefield 5 won’t have a season pass or pay to win loot, it’s not out of the question for EA to tweak the transaction system in MUT to be more palatable to players, even if it’s a small tweak like having all modes free to play. Card art is always top notch so expect that to continue, though hopefully with less repeat art than there was in Madden NFL 18. Since the blog has already been released, I expect more detailed information to trickle out as we go along.

1. Team Builder/Stadium Creator: While exceedingly unlikely due to the NFL being protective over its license, having the TeamBuilder feature from the NCAA Football series would be an incredible addition to franchise mode. The current relocation teams and uniforms have been present for the last couple of years and are all due for a refresh. Same goes for relocation and rebuilt stadiums. Introducing even a rudimentary stadium creator like in past games such as Madden NFL 11 would go a long way towards refreshing the relocation process.

2. Fully Integrated Companion App: With all due respect, the Madden companion app is not very good at all. Having been a part of a yearly 32 user online franchise, using the app has been an exercise in frustration. From glitches to limited functionality, the app has been almost useless to hardcore franchise players. Admittedly a selfish desire, I’d like to see the app become fully integrated so that I can set my draft board, change my depth chart, or even propose or approve trades on my mobile device for those times when I can’t get to my console.

3. MyCareer-style Player mode: Instead of Longshot, I’d like to see the introduction of a story-driven mode that stars a created player like MyCareer in the NBA 2K series. Devin Wade was fun to play, but being able to create a custom character and follow his journey through the NFL would be a dream. Even having some sort of flag or street football like the NFL’s version of The Park would be something that would probably pull in more players than a follow up to Longshot. Even more so than TeamBuilder, the hope for this type of mode is probably the least likely to happen, but one can wish.

What do you expect to be revealed for Madden NFL 19 at E3 and EA Play? Comment below.

Madden NFL 19 Adds Specialist Positions Including Rush Ends, Slot Receivers
Which Madden 19 Hall of Fame Legend is Right for You?