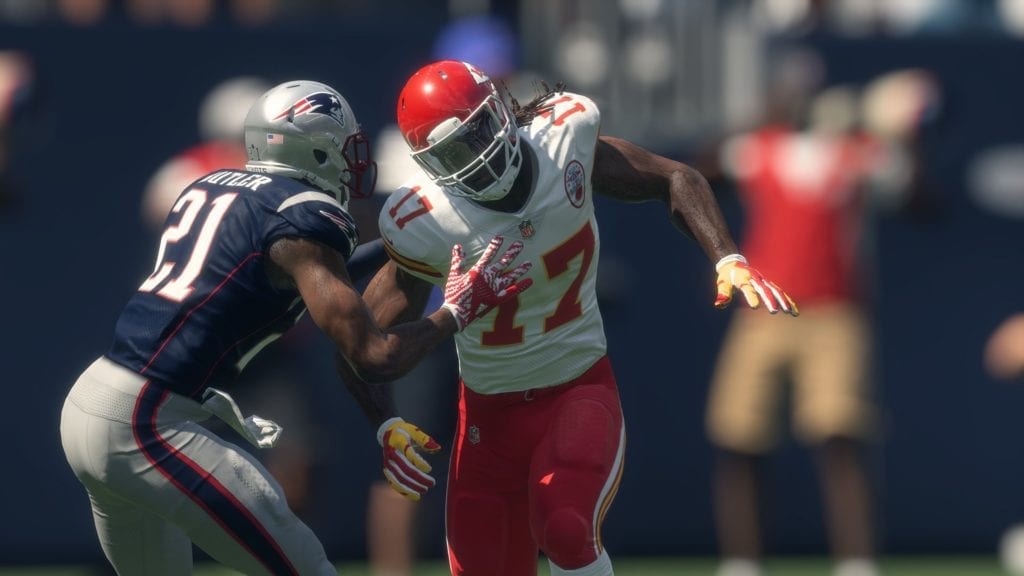 My favorite addition to Madden 18 is the ability to select your own game style. With competitive, arcade and simulation all being options you can select from, there should be something for everyone to enjoy. So game styles, on the surface, should begin to fix one of Madden’s largest and most underrated issues. The issue I’m talking about — if “issue” is even the right word for it — is that a true football simulation would ruin competitive and arcade play.

The fact of the matter is that Madden’s audience is made up of several subgroups. Appeasing one, like the group of players who just enjoy playing with friends and creating highlight plays left and right, means disappointing another. Sliders were probably meant to be an answer to this problem, but they often complicated the issue rather than fixed it. With the addition of game styles, Madden 18 has taken the first real step toward pleasing everyone.

While the idea of providing the various subgroups of Madden players a framework to work with is a nice idea, it doesn’t make much of a difference if it doesn’t work as advertised. So does it work? The short answer is that, yes, there are some noticeable differences (we’ll get to that in a bit). Unfortunately, they aren’t quite as pronounced as they probably should be. Maybe that’s to be expected for the franchise’s first real try at something like this, but it would have been nice to see the game go above and beyond to create real and substantial differences between simulation style and arcade (or competitive).

I think we’d all love a world where simulation players have to deal with bad snaps (including snaps that never make it into the quarterback’s hands), players slipping on turf or maybe even a wide receiver running a bad route now and again. These are all things that happen, often multiple times in a single game, that we never really get to see in Madden 18. While the option for different game styles provides some nice changes, it also provides an opportunity for Madden to do some things it really hasn’t been able to do before. It’s unfortunate that this year’s game didn’t take full advantage.

Conversely, arcade really does feel more like an “arcade” kind of experience. Players will make leaping grabs regularly, broken tackles happen all over the place, and hit-stick tackles are more frequent than normal ones. All the same, wouldn’t it be neat it we could get something more akin to NFL Blitz? This one may not be a viable option moving forward, unfortunately. The NFL, especially with concerns over injuries and concussions, probably don’t want things to be represented in such a cartoonish way. All the same, arcade does a nice job of really separating itself from the pack.

Competitive should work just fine for those who are looking for a more equal playing field. If there’s a complain to be found here, it’s that pretty much all players feel the same. According to EA’s “Madden NFL 18 Game Styles” blog, this seems at least somewhat intentional. Ratings aren’t meant to play as large of a role, but doesn’t that take some of the strategic nature of competitive play away? It becomes less about how to use specific players and plays to your advantage, and more about who has the best stick skills. Perhaps that’s the point, and if it is, then the competitive game style is definitely a success.

Who Are The Game Styles For?

Having spent more time with the simulation game style than anything else, I can confidently say that it does a lot of things that make Madden 18 a more realistic experience than prior iterations. One of the biggest issues I’ve had with the franchise is that quarterbacks don’t have much of a skill gap — most competent players could win a Super Bowl with a halfback playing quarterback in some of the more recent Madden games.

This is obviously a large issue, and the simulation game type seems to go a long way towards fixing it. I’ve spent a lot of time playing as my hometown Jacksonville Jaguars and having Blake Bortles missing throws to his talented receiving core feels an awful lot like realism. Switching over to an Aaron Rodgers or Tom Brady makes a notable difference, and that’s an important fix. Unless you’re ready to be frustrated by bad players being bad, simulation probably won’t be for you. It’s also worthy of note that off-ball injuries take place in the simulation game style, so get ready for some heartbreaking and unexpected injuries to shake up your franchise.

Arcade mode is a little more straightforward: If you’re looking to have a good time with friends and show off some of the game’s newest animations, arcade mode is perfect. This is the mode I’ve spent the least amount of time with, but even just a couple of games will show you how absurd the game of football can be. It’s a good bit of fun, and as previously mentioned, almost brings back feelings of older, more arcade-like football games.

Competitive feels the most like older iterations of Madden. It will be good for anyone looking to prove their skills at the game, and ultimately will be the best for online play. One of the best things about competitive play is that there are far less interception drops — especially the ones that have a tendency to look really bad. When you throw a ball into coverage, don’t expect it to be magically dropped. It really does a nice job of rewarding “good play” and punishing “bad play” so if you’re looking for a game style that’s indicative of your skill set and not the team you’re putting on the field, competitive is definitely the way to go.

Was The Idea Worth It?

Absolutely. Especially as Madden moves forward, this should open a lot of doors for the franchise to continue adding simulation events without hurting the casual and competitive subgroups. Likewise, it should improve post-release support, as the game developers have the potential to make changes that will impact one style without impacting another. It’s far from being fully fleshed out, but there’s an awful lot to be excited about with the addition of game styles in Madden 18.

Madden NFL 18's Longshot Proves to Be a Real Touchdown
Madden 18: Here's What You Need to Know