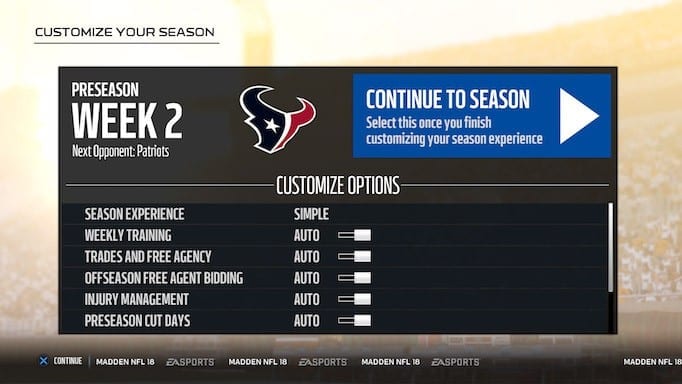 EA has just posted their Madden NFL 18 franchise mode details, along with information on their new Play Now LIVE feature.

With the new Play Now LIVE feature in Madden NFL 18, you’ll be able to play along with the real-life NFL season and playoffs like never before. Jump into the stories as they are happening around the league, with Play Now LIVE matchups posted each week with up-to-date stats, rosters, and commentary ensuring you have a rich and deep experience. Excited about Sunday’s primetime game? Head  into Play Now LIVE and experience it on the field before you watch it on TV.

At the end of each Play Now LIVE matchup, seamlessly continue your team’s season by using brand-new customization options. Play a simple season that gets you from game-to-game as fast as possible, or play a full-control season to manage and improve your team as you see fit. Customize your experience even further using a new suite of options.

Madden 18 also delivers one of the top community request, a Customizable Draft Board. Organize your players as you prepare for the draft using a sortable draft board. Drag and drop players the same way you set your lineup on the Team page in the Franchise hub. It’s easy and gives you more control than ever.

Whether you miss the draft in your multi-user league or sim past one playing solo, the CPU will make decisions based on your draft board. For a more authentic drafting process, we’ve added a max drafted player per position limit and a cooldown per position when the CPU is drafting. Expect the CPU to draft more authentically in Madden 18.

Major improvements have also been made to commentary in Franchise this year for a more immersive experience. The intense fourth quarter, two-minute drill, and Super Bowl moments come to life with an unprecedented level of detail and intelligence. This deeply contextual content illustrates the story of the exact moment of where you are in the game based on how the contest has transpired.

Announcers Brandon Gaudin and Charles Davis help to immerse you in the story of the season by highlighting the playoff hunt, recapping previous games, and announcing weekly award winners. You’ll also hear Brandon and Charles discuss when an offensive player passes a certain yardage threshold in either rushing, passing, or receiving.

Stay up-to-date with what’s going on around the league with commentary related to other games in progress that appears in the bottom ticker. As you progress past year one, you will start hearing lines for drafted players that deepen your immersion as you advance into your Franchise. To go along with the new drafted player commentary, Franchise more frequently generates last names with audio.

Trades are hard to make in the NFL. Some players are valued so highly by that trading for them would be nearly impossible. Franchise now simulates this by addressing some types of players that were previously too easy to get from the trade system, and would often leave teams without future investments.

In Free Agency, an NFL player’s market value becomes clearer the further into the free agency period you get. Players must weigh contract offers they have against their desired price and possibly risk having no teams willing to match the cost.

Previously, players were too willing to accept low value contracts if there was only one team offering terms. Franchise now ensures players don’t accept unreasonably low offers. Players will no longer accept contract offers that are less than 30 percent of their desired price. There’s also a chance that players have a chance to reject low-value offers at up to 70 percent of their target price.

Progression tuning affects several aspects of the Franchise experience, including feedback on player performance, league balance, and simulation results. The progression system ultimately ties into nearly every system in the game because of how it affects player ratings. The Franchise goal this year was to continue improving league balance deep into simulations, while maintaining the natural fluctuations that arise from events, like when new superstars enter the league.

Injuries in football can happen to anyone on the field. With new off-ball injuries in gameplay and new tuning in simulation, the Franchise system will more realistically reflect NFL injuries.

The way you evaluate your team is important for determining roster management goals. When letter grades were added, the intent was to help you make those evaluations quickly. However, the grades did not accurately describe how good your position depth is relative to the league.

QB is the most important position in football. It seems like the best QBs can extend their careers well beyond most other NFL athletes. Franchise now allows QBs to play out a realistically lengthy career when they deserve it. For example, Tom Brady will not always retire after one season.

Preseason is an exciting time for teams as they make decisions to build their 53-man roster. Teams use this time to evaluate their players and test new strategies in a live competition, instead of on the practice field. To make the experience more authentic, Franchise has made adjustments to some preseason rules.

Regression is a necessary system for ensuring that Franchise simulates the realistic rate of churn among NFL players. The average NFL career only lasts a few years. For the simulation to be accurate, more than half of the league needs to be replaced every three years. Franchise now ramps players into the regression system slowly so that you have more time to use these players and to execute a replacement plan.