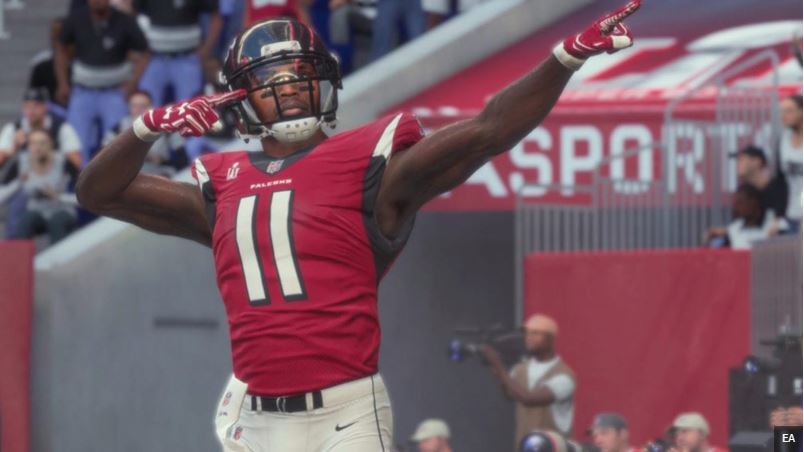 One of the most interesting features in every sports game is starting a franchise mode with a fantasy draft. The idea of the league blowing itself up and starting over again from scratch is wild. Think of all the possibilities. Now stop thinking about them because I wrote an article and I want you to read it. With football season hitting its stride, I took a stab at how this concept would look in real life, and how it differs from a fantasy draft in Madden NFL 20.

There’s no precedent for anything like this happening in real life, outside of the recent XFL league draft. The XFL arranged their rounds positionally with 10 rounds each of offensive skill positions, offensive linemen, defensive linemen/linebackers, and defensive backs. The rest of the rounds were open to any position. For the sake of comparison (and chaos!), this draft would be wide open in every round. The draft would snake after each round.

Before we get started, there are a few logistical questions to think about in real life, mainly revolving around age and contracts. Would real-life Tom Brady be drafted among the top players? I still think the answer is yes. But the real-life team that drafted Tom Brady is probably going all-in on a win-now team, so their draft might be different than others. As for contracts mattering, the answer would be somewhere between “I don’t know!” and contract slot values. My best guess would be something along the lines of slotted contract values for draft position, or maybe even slotted values for each football position (the first quarterback drafted makes X, the second drafted makes Y, and so on).

Like I said earlier, there’s no real information to cite in a real-life version of this scenario. No Excel spreadsheet says Aaron Donald is a 99 in real life, and that 99 is final for everyone. The closest thing we have to view how teams value certain positions is the NFL Draft. So that’s what I’m using. And despite Kevin Durant’s pleas, we will “look at graphs while having a [football] convo.”

In the last 20 NFL drafts, only three positional groups have been selected number one overall: quarterbacks, defensive ends and offensive tackles. The last time someone outside of those three positions went number one? WR Keyshawn Johnson in 1996 (it worked out). This was the year before running back Ki-Jana Carter went number one to the Bengals (it did not work out). There’s an old saying that football games are won in the trenches. Maybe that’s true, or maybe football games are won over the course of 120 mathematical coin flips as two grown men try to out-guess what the other one’s doing. Who knows? But the data suggests that football coaches and front offices believe that games are won and lost up front, on both sides of the ball, and that’s what matters here.

I’ve included a chart that breaks down how NFL teams have drafted every position, by round, over the past 15 years. The greener area around a number means a higher the percentage of that position was drafted during that round. You’ll notice the same three positions that have been drafted number one overall show up again here. Defensive tackles show up slightly behind the other linemen. Things even out in the second round with other positions catching up with linemen and QBs, and you’ll also see more defensive backs come off the board. 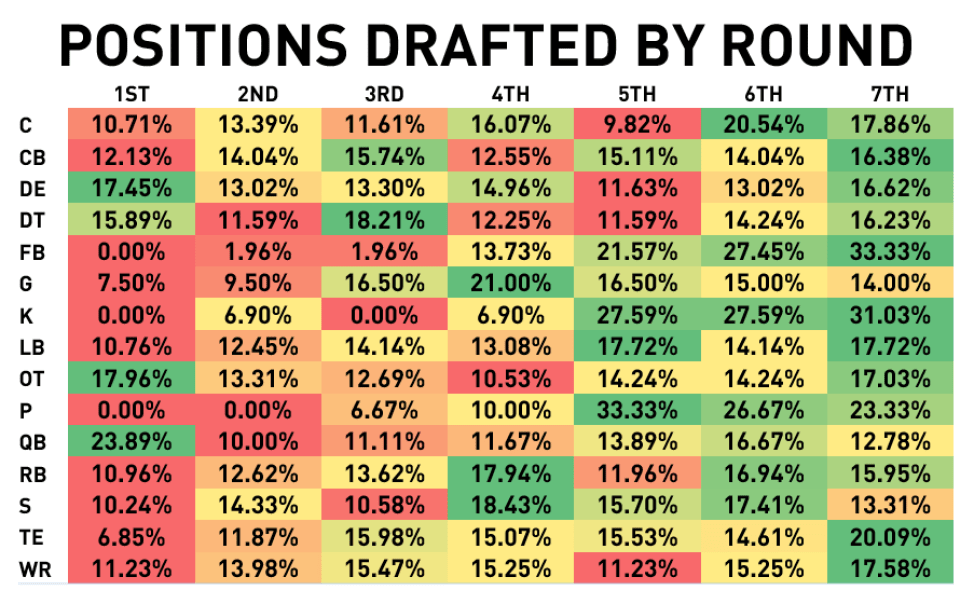 Obviously, there would be more than seven rounds if the entire league re-drafted. But it’s noteworthy to see how front offices view certain position when there’s a new pool of talent coming into the league.

I also included graphs that breakdown, arguably, the most exciting positions: quarterback, wide receiver and running back. What I’ve done is taken the top 40 at each position and plotted them by yards (through Week 8) vs. draft position. 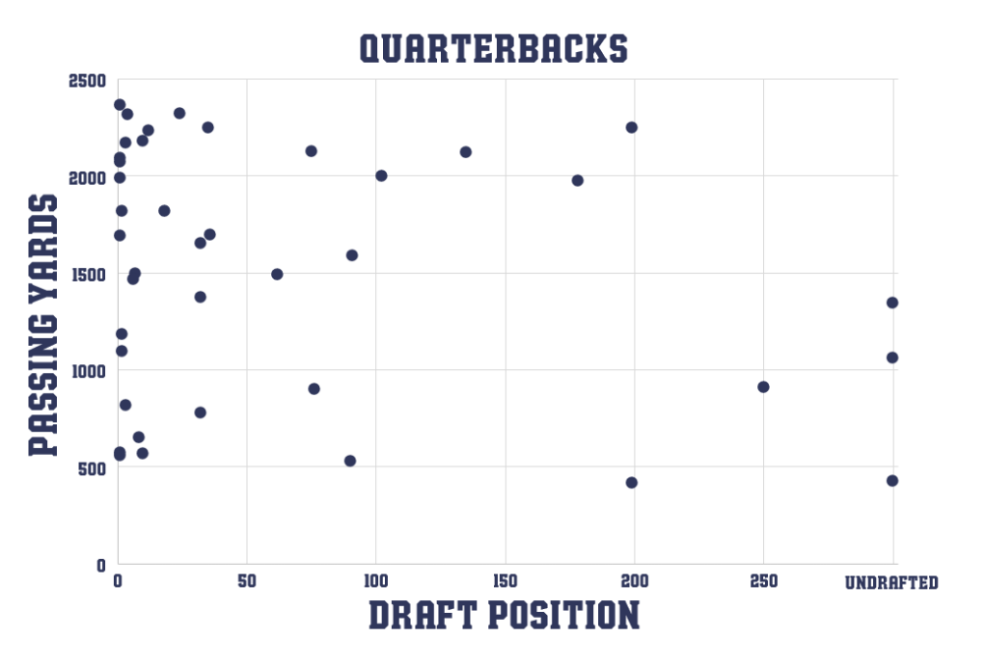 What you’ll notice with quarterbacks is the number of data points to the left of the screen. This supports what the chart showed earlier, that quarterbacks are often drafted early. But look how many are within 500 yards of the leader, and how far right that group extends. While teams are constantly eager to draft quarterbacks early, there’s value to be found later in rounds. Notably, Tom Brady, Dak Prescott and Kirk Cousins shown here. 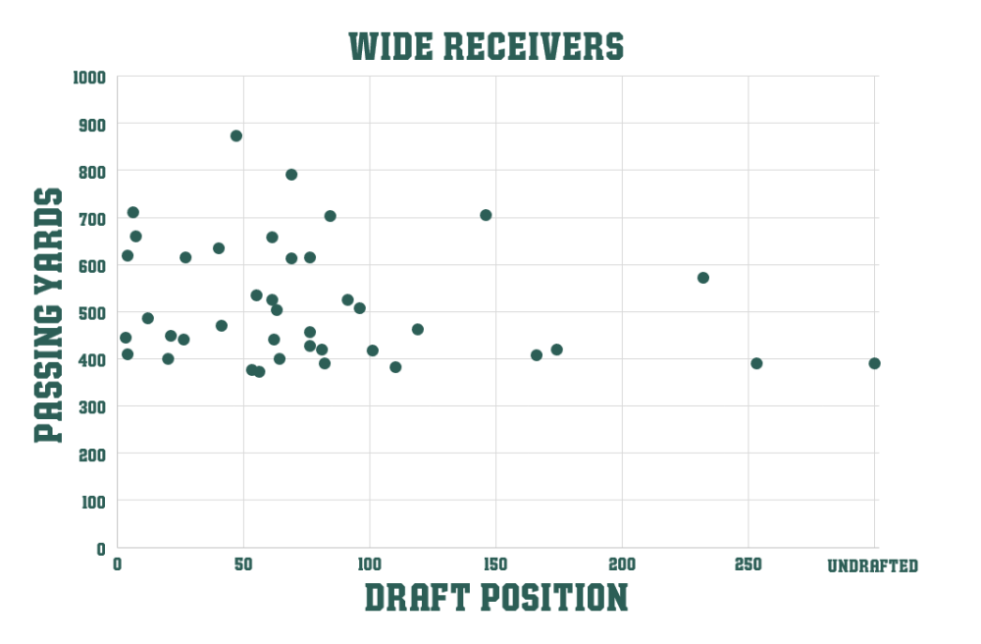 With wide receivers, the best ones were drafted in the first three rounds, so relatively early. After that, wideouts don’t really separate themselves based on when they were drafted. 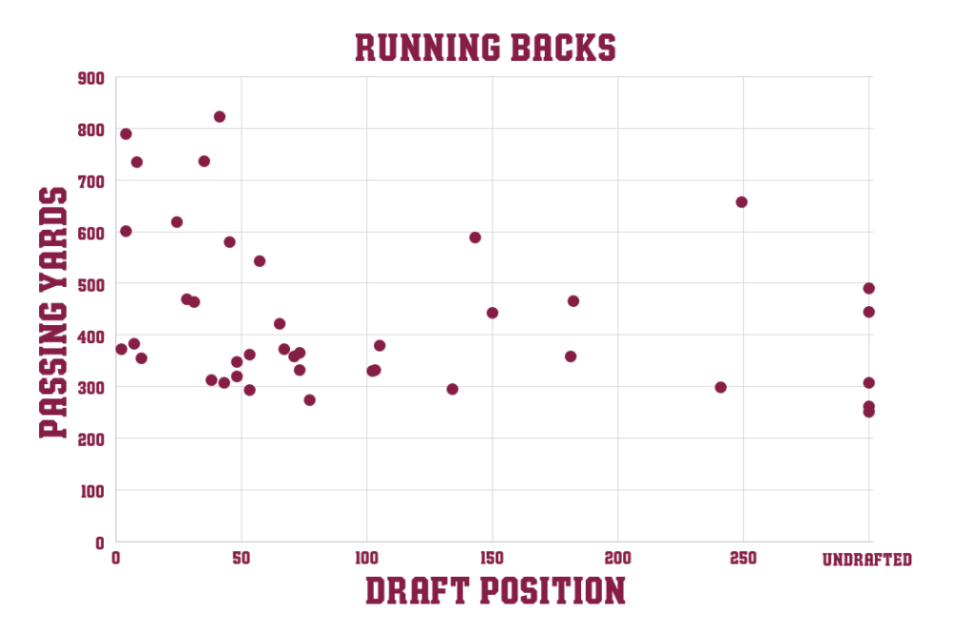 Now, you can argue that these graphs don’t show you that much because of all the guys drafted in the NFL Draft, none were the proven commodities they would be in an all-league re-draft scenario. However, it’s still interesting to note the amount of value that can be found later in a draft, even when you think you know how players would grade out.

What Does It All Mean?

Perhaps the most important question to look at in the real-life situation is: how many quarterbacks get drafted before the first non-QB gets drafted? And who is that first non-QB drafted? If we’ve learned anything from the data, it points to Aaron Donald as the first non-quarterback drafted. As for where? I’d say somewhere in the middle of that first round. Keep in mind, we’re operating in a scenario where this draft happens before the season. People are still high on Mitchell Trubisky and Jared Goff. Regardless of where the Browns are picking, I think they take a QB with their first pick. That position has been such a mess for them, that they’re getting it squared away immediately. Maybe the Bears just take a kicker number one to prevent their bad luck of late. In all seriousness, we’re probably getting into the third tier of quarterbacks before we’re drafting any other position. The first team to take a non-QB is taking a huge risk, and probably hoping the next teams follows suit. We’d likely see Khalil Mack or someone like Joey Bosa come off the board after Donald. In terms of offensive non-QBs, I think we’d see offensive tackles, as well as running backs such as Barkley, Elliott and McCaffrey.

In Madden 20, I ran a few fantasy drafts, using the initial rosters and ratings, and charted the results (I’ll spare you, and Kevin Durant, the results in graph form here). What did I find? As I expected, Madden 20 LOVES speed positions — most notably wide receivers and cornerbacks — a lot more than I found in my research above.

Patrick Mahomes routinely went number one, as it looks like Madden doesn’t believe in the Madden curse. The next few picks seemed to be a rotation of Jalen Ramsey, DeAndre Hopkins, Odell Beckham Jr., Juju Smith-Schuster, Michael Thomas and Byron Jones. The earliest the second quarterback was taken was 21st. It was either Deshaun Watson or Baker Mayfield. Madden favors younger players at quarterback, as Brady, Rivers and Brees never went inside the top 50. 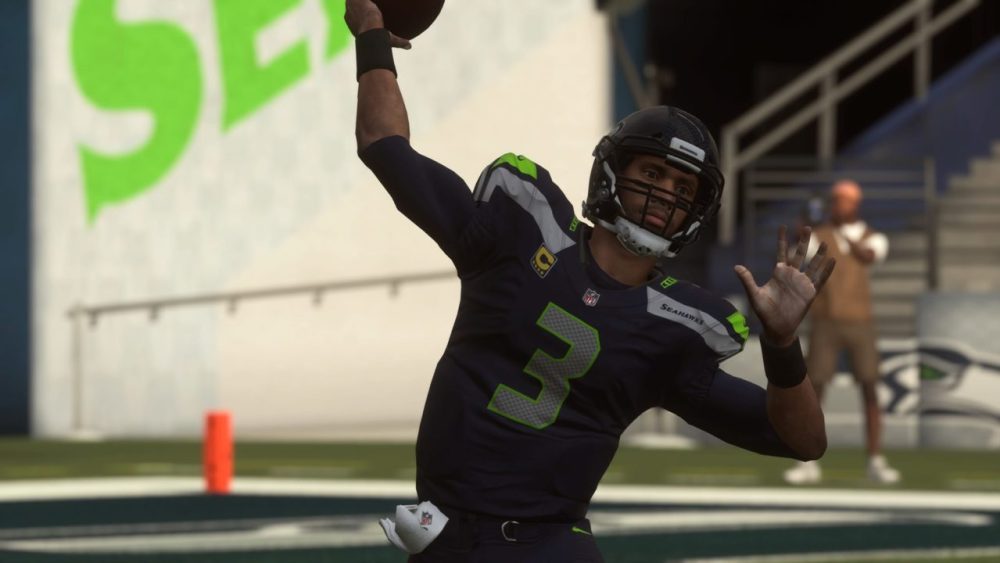 For me? I’m drafting my Madden team like I’m 12 again. Let’s say I have a pick in the middle of each round. Knowing how the game is drafting, Khalil Mack or Ezekiel Elliott should be available for me there. I’ll take Mack. When we get back to me in the second round, that’s when I take my fast quarterback: either Lamar Jackson or Russell Wilson. I’d skew towards the younger of the two, so Jackson’s my guy. Nick Bosa should also be there for me in the third round, so I’ll beef up my pass rush. As we get into the fourth round, I’d probably be looking for an offensive lineman, but seeing how the computer LOVES corners, I’ll take Donte Jackson. After realizing I don’t have any wideouts, Will Fuller is still there in the fifth round, and now I have my lead wideout. From here, it’s building up my offensive line. In all my Madden experience, I’ve always been able to succeed with a good offensive line, rather than a top running back. I’ll take my chances here, and hope I can find the next Phillip Lindsay and actually draft him this time.

You have to take my real-life scenarios with a grain of salt, as they’re purely conceptual. But, as I scoured the internet, I found similar all-league mock drafts suggesting the same things I thought. I wasn’t surprised that the real-life draft idea and the Madden draft differed. But I was surprised at how much they differed. Seeing how few quarterbacks were drafted up top, especially in a game with one on its cover, was pretty shocking. I understand that quarterbacks are the most important players on a roster, but I’ve always felt their actual worth in relation to other positions is a tad inflated (pun intended for Tom Brady). Maybe the AI Madden GMs know something we don’t.

Do you know something I don’t? How do you think a re-draft goes in Madden among 30 users? How about in the NFL? Tell me about it, and share your Madden fantasy draft strategies below!