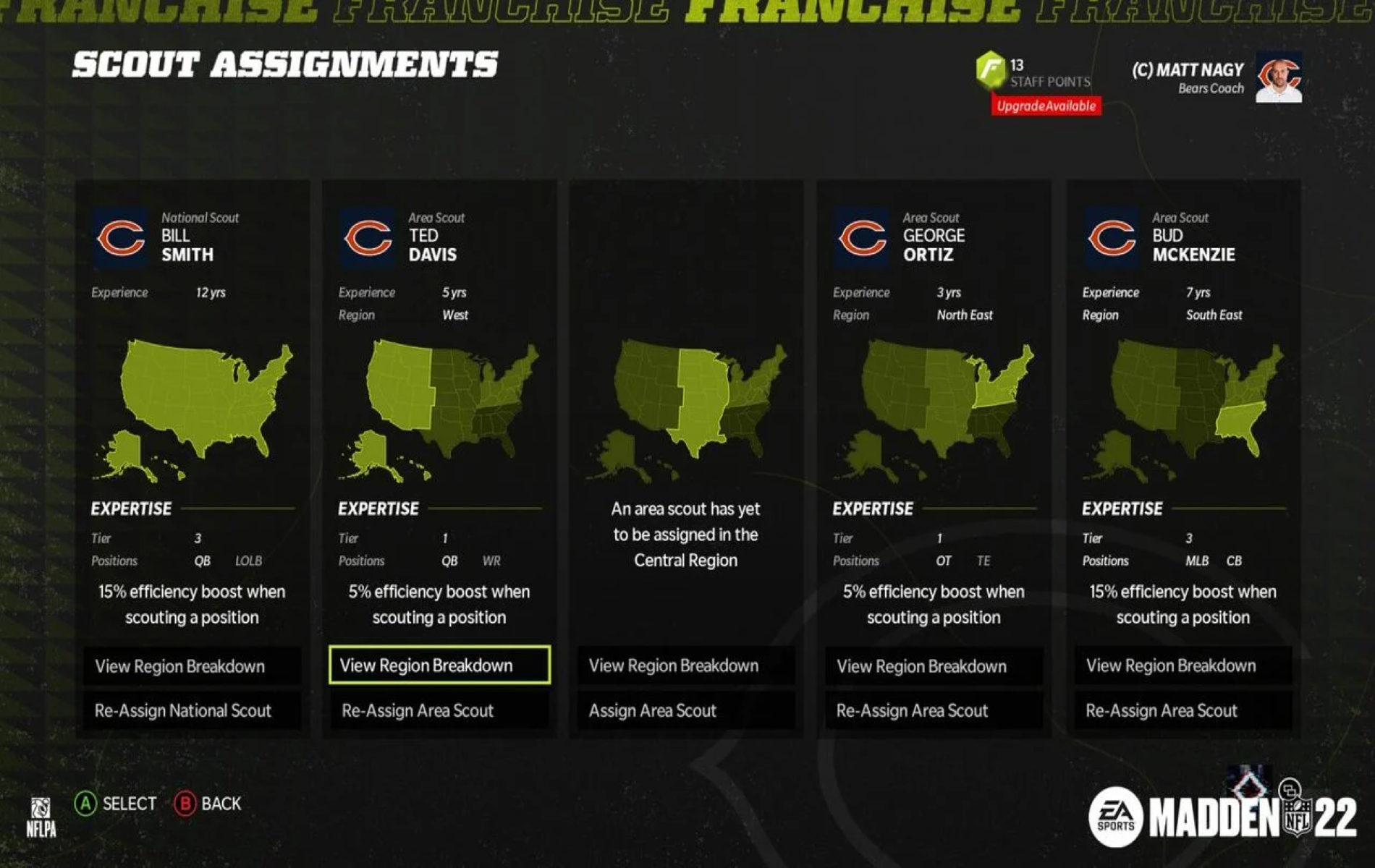 Madden franchise mode fans had to wait a couple months for the hotly anticipated Madden 22 scouting update. This scouting feature is one that many of us have put a lot of hope into as we hunger for a franchise mode experience that taps back into the glory days of Madden‘s franchise mode — glory days that are many years in the past. The problem with announcing additions to a franchise mode in a sports video game and then asking your fans to wait for it is that it can often lead to inflated and unjustified expectations.

That said, the importance of this patch for me was at a very high level. So instead of rushing to make a judgment based on the initial impact of what I saw, I wanted to take a couple extra days and see how it played out with different scenarios in multiple seasons.

My hope for this patch was that it would add layers to the Madden franchise mode and give me, and many others, reasons to continue to play season after season. So let’s get into whether or not it did that in this Madden 22 scouting update review. 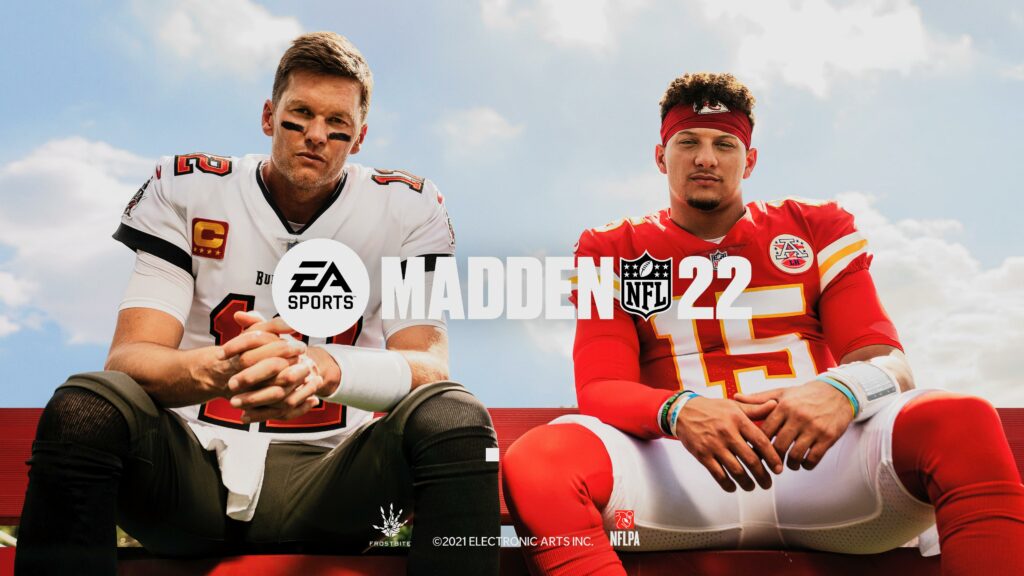 From the start, the scouting update alerts you to a timeline that you as a coach will follow and adhere to. You will notice as the season progresses that there are different requirements and options that will become available to you during any given week. An example of this would be multiple mock drafts that are made available and are dynamic in nature as teams’ records start to fluctuate as the season progresses. 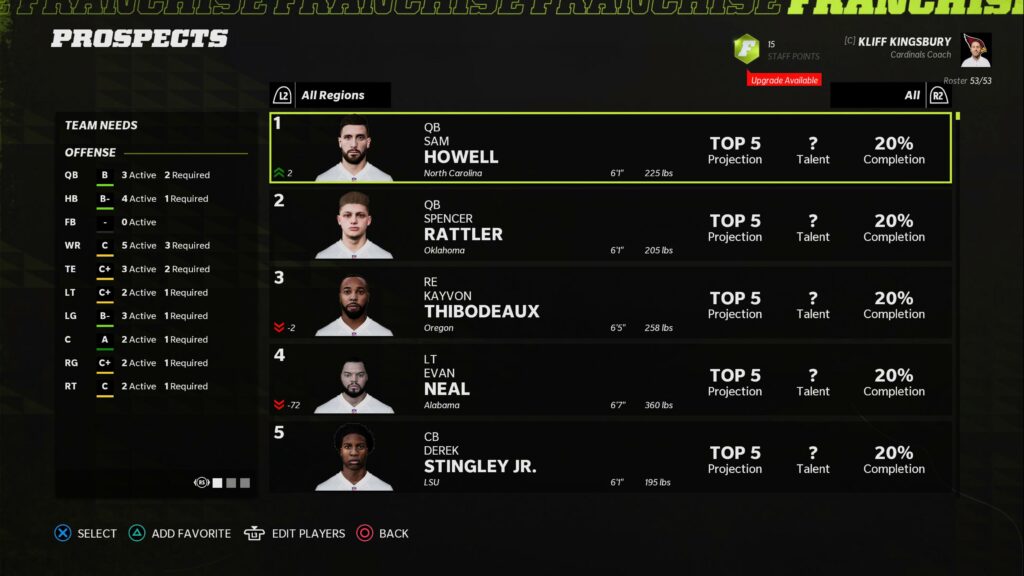 You will also be able to direct your scouts in different directions as the season continues, and you will start to have the option to re-direct the scouting focus on a national and regional level. You will also hone in on specific players and positions that will help fill the specific need(s) of your current team.

The new scouting additions also give you, as the head coach/GM, the ability to hire and fire scouts based on need and experience. While I really like the idea behind this option, it feels a bit tacked on. The developers could have taken this idea and implemented a risk versus reward type of system that we have seen in other sports series. 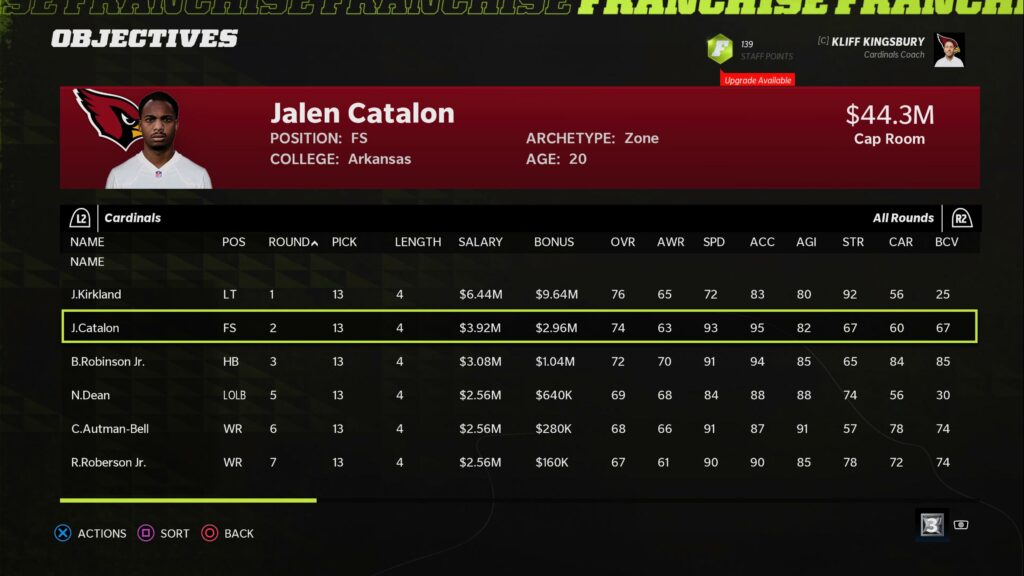 As it stands, the ability to hire or release a certain scout is based only on experience and expertise in a specific area. There is simply no monetary involvement in deciding on who to hire or retain. In addition, there was very little information that helped me understand which scout best suited my needs in the present and in the future.

The new scouting options are something that I did enjoy, and I think they are a great foundation for the future. However, they were not as dynamic or as deep as I was hoping for this time around.

As I previously mentioned, one of the new scouting additions is the ability to scout on a national and regional level. This may not sound like that big of a deal, and in some ways it isn’t.

However, what I did find interesting and useful was the fact that I could have certain scouts focusing on certain regions where the bulk of the players better suited my team’s needs. This allowed me to fill voids in the short term and help change the philosophical direction of my team for the future. 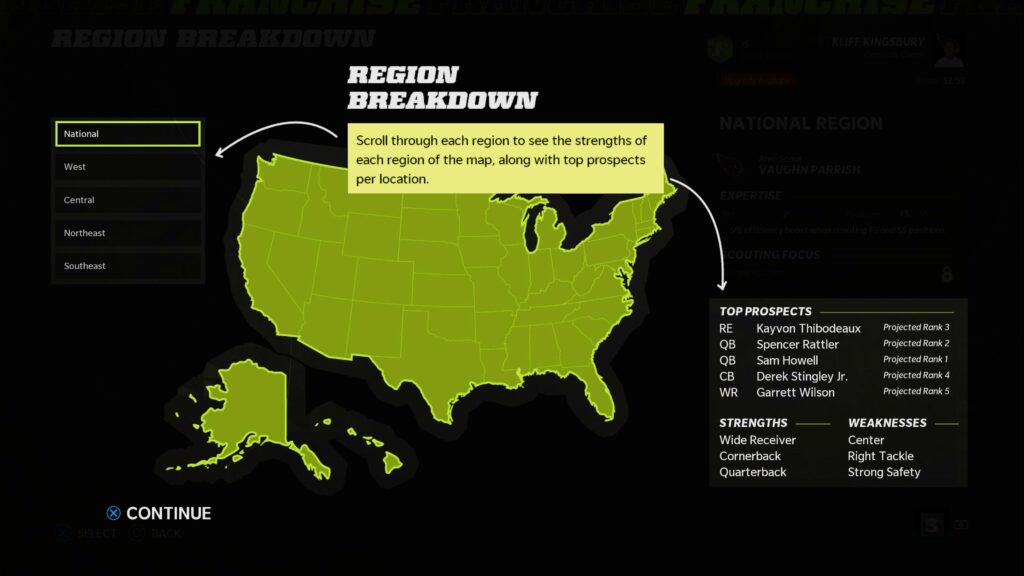 I think it is important to understand how to maximize your scouting efforts and focus. If you have the right scout in the right region with the right players that are considered “needs” for your team, there are bonus attributes that can be utilized to help unlock more information. Seeing as how unlocking certain information that is critical can feel randomized, placing your scouts in positions to maximize their talent and skills is an absolute must.

Again, regional scouting is wisely implemented and is a feature that can be fleshed out to really help the user in trying to focus on team-specific needs. While what we have does help in that regard, it could go much deeper in the future and become a greater asset in terms of finding talent that may not be on that front page of the big board.

I will always embrace the idea of the “it’s an educated guess” mentality when it comes to sports titles and transactions. Even the best owners, GMs, and coaches will miss, and some of the best can miss badly on any given transaction. Some coaches and GMs are known for being excellent in the late rounds, while others often struggle with the pressures of a top-five pick in the first. These types of scenarios are nothing new to the NFL and should have been implemented into the Madden franchise long ago. 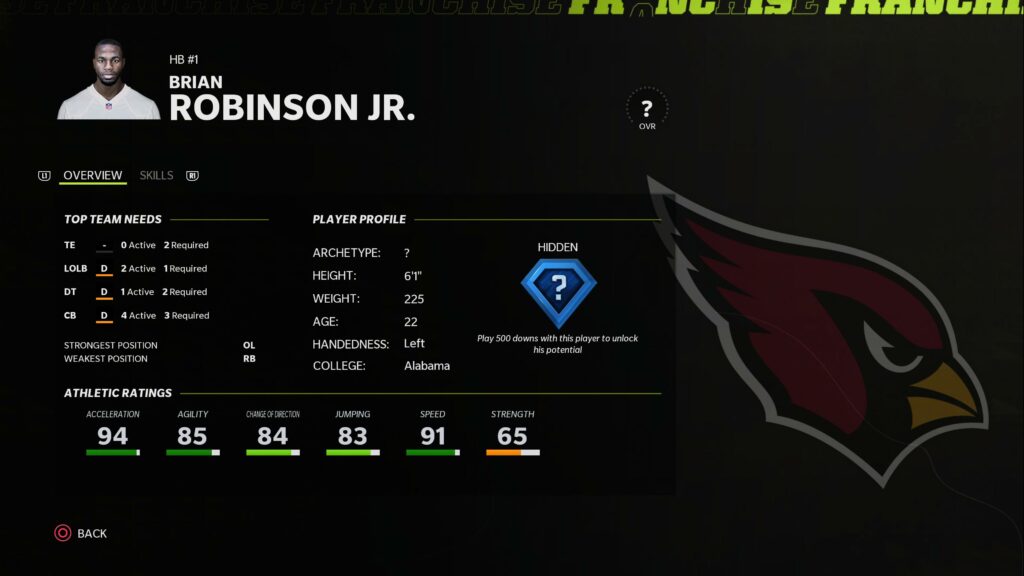 Even if a mid-season trade doesn’t work out, or a free-agent signing during the offseason goes bad, or a draft pick busts, the positions of power still relied heavily on scouting reports, film, visits, and group discussions to make these initial decisions. In short, this is a very difficult thing to replicate in a video game. While the scouting system in Madden 22 doesn’t reach the level of realism that I was hoping for, it does poke at that realism and adds elements of confusion and mystery that are good building blocks for the future.

Beyond that, there is less information to be consumed than what we had available to us previously. In a small way, I kind of enjoy that. There is some important information on the table that can be unearthed, but in the end, the scouting information feels less complete and puts us in a position to be more reliant on others. 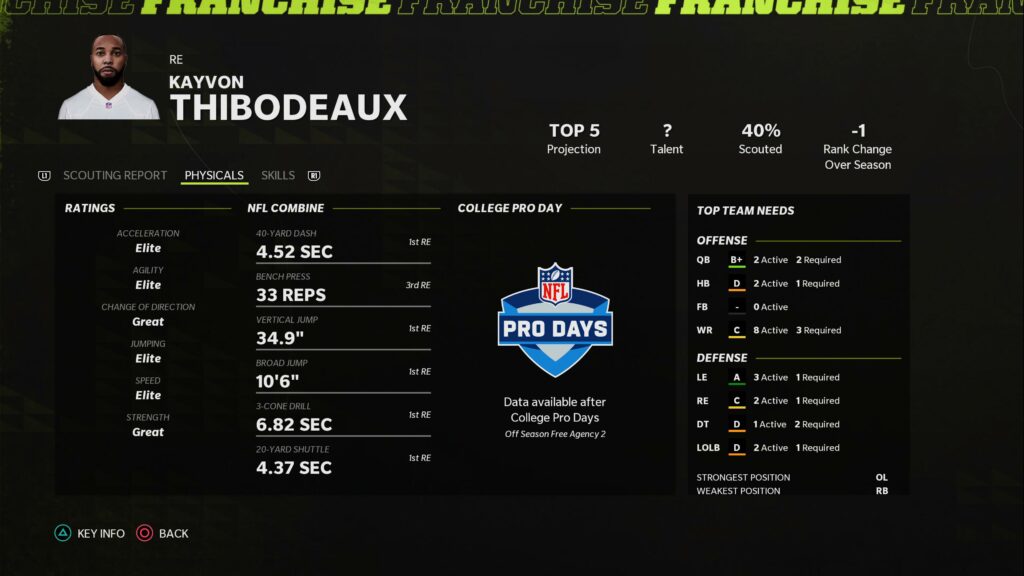 When you replace a system that so many are used to — and one that has grown stale over the years — it is probably best to make sure the component you’re replacing it with is deeper and more realistic. Make no mistake, I like the new system, but they need to keep adding to it and give greater control to the user with more input.

To build on that, regardless of your thoughts on the new scouting system and process, the fact is there is simply less to do. As I mentioned above, I always enjoy the idea of the “unknown” element being implemented into a sports title, and in a sense, we have that. Sadly, it comes with a clear downside for now. 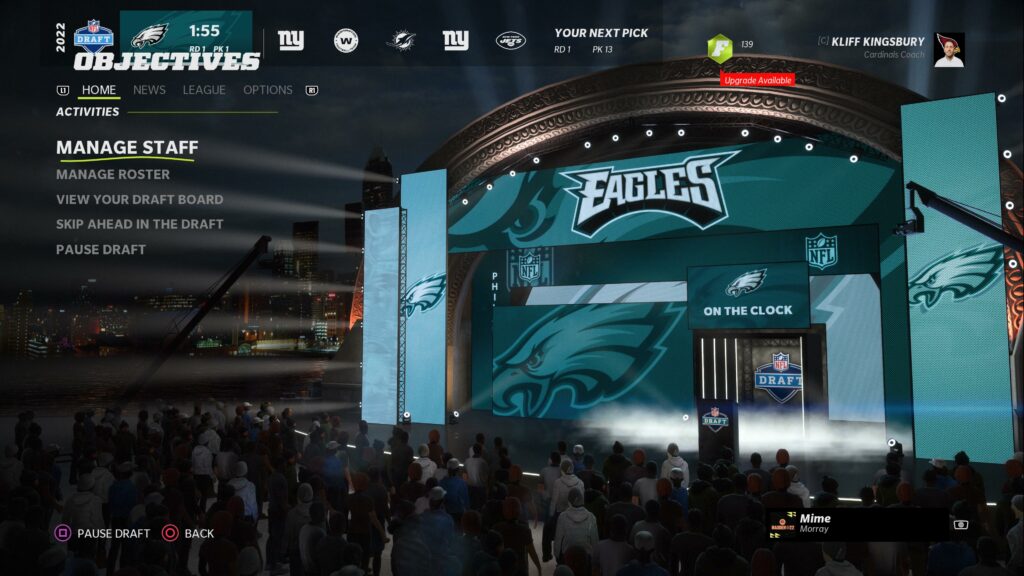 In the future, I think the developers can accomplish implementing the “fog of war” scenario while still have scouting be a deep and immersive aspect of the Madden franchise mode. Truth be told, I have always liked the “points allocation” system where you can disperse points in areas of greatest need and interest.

The system that is in place now feels more like the tagline of the famous pitchman Ron Popeil and his “set it and forget it” brand of marketing. The reality is here that once you pick your scouts, assign them to their region, and inform them where their focus should be, the new scouting system becomes very hands-off and very disconnected for the user.

To put this another way, the more hands-off approach could even be a net-positive, but you have to give me more input in terms of how to help shape the outcome.

Let me assign scouts points from a pool and let me tell each individual scout what is most important to me, with detail. Let me see the scouts’ strengths shine or give me a reason to show them the door and find their replacement.

The biggest issue I have is that scouts that are in place are just names with a number designation and a focus. Give me the minutia of the situation and let me choose the type of scout I want and need.

Even if I hire a new scout to replace the former, I am forced to replace that scout with a similar type of scout. In other words, the only advantage of a replacement is a new player focus. This is truly where the lack of monetary investments into specific scouts shows up as a glaring weakness. 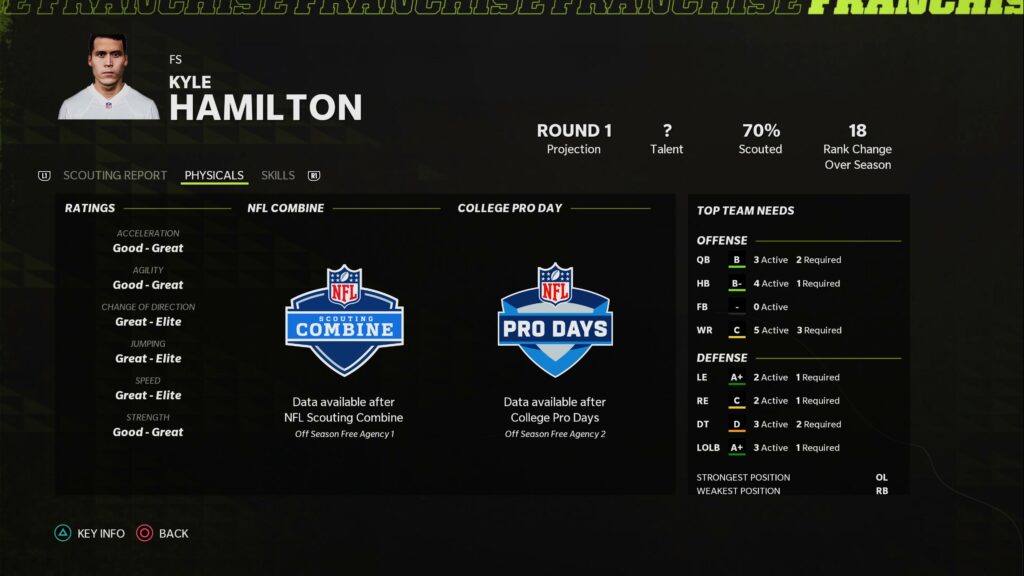 The new scouting system also includes NFL combine reports, pro-day results, and the option to hold private workouts. While there is a lot of information here, it feels like they really missed an opportunity to let the user actually control and use the perspective draftee in the private workouts.

The practice field is already there in-game, so let me take control of the talent and run them through different scenarios. Let me see what they seem naturally gifted at and where there might be an area of concern.

Once again, there is so much that can be added to deliver a real in-depth experience here, but it feels more like a foundation is being created. That said, the foundation only works if the architects continue to build on and deliver the pieces that make sense.

In the end, was the wait worth it for those who held off on starting their online franchises and leagues until now? The answer to that is always going to be subjective, but in my mind, the answer is most likely not. The new scouting experience just does not offer quite enough depth and realism at this point when balanced against all the games (and even seasons) some of us could have played by now.

As I mentioned throughout this article, there just isn’t enough depth to the system as it stands right now, and unless the EA developers continue to flesh this system out, it feels like it will be an empty gesture.

That said, if they keep the foundation and continue to build upon it and add scenarios that include variables and risk-vs-reward opportunities, then we have something here. Continue to create a necessity for the scouts, but keep me (as the GM) involved in the process so the final product on the field is either a success or failure based on the collective whole.