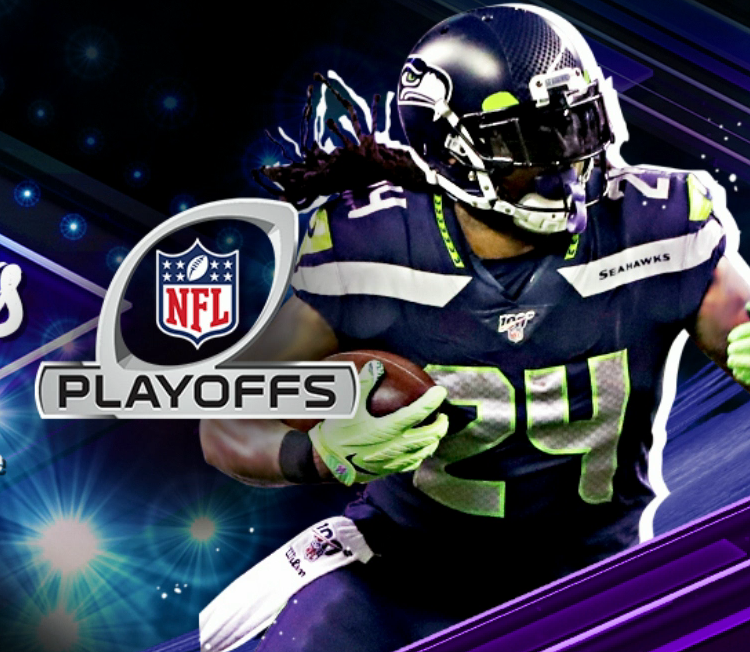 The Zero Chill promo wrapped up just in time to now start the MUT NFL Playoffs promo in Madden 20. This will serve as the general guide for the promo as we go through the NFL playoffs. Starting with the Wild Card Weekend, we get a ton of new cards, including 12 new Heroes, 2 Masters, 3 Legends and new offline content. Here is the breakdown of what’s available so far.

Also, just a note that the MUT NFL Playoffs promo is generally first and foremost to help theme teams. Theme teams are not as strong this year as in the past, and some cards of course are great beyond theme teams, but I think it’s fair to say a core tenet of this promo is to help out those who like using specific teams (assuming they made the playoffs). 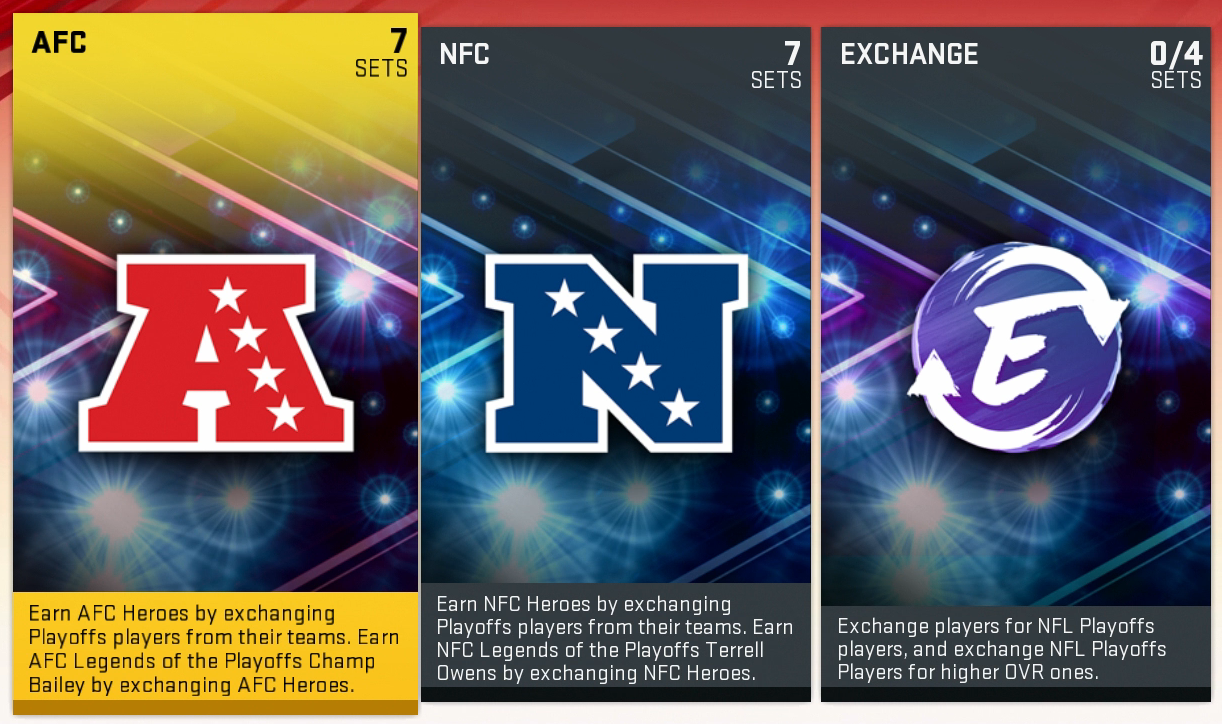 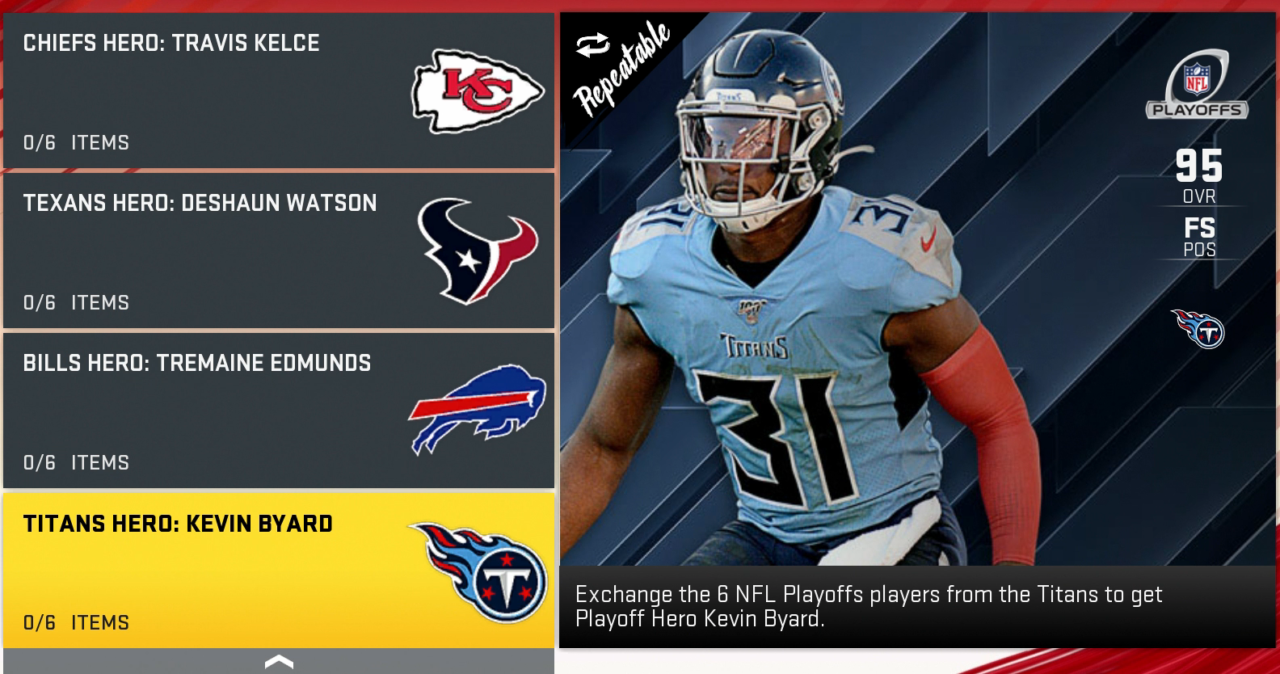 How this works for the MUT NFL Playoffs promo is you first acquire the Heroes by getting six NFL Playoffs players from each team to exchange for the Hero for that team.

Analysis: Archetypes are incredibly important this year, especially for quarterbacks. The Josh Allen card is a significant upgrade for him as he picks up 85 speed, 97 throw power, 93 throw on run and mid 80s accuracy ratings. The problem is his archetype is Strong Arm, so he’s not close to getting Escape Artist or Dashing Deadeye. So even with solid speed, he’s still not going to be super fast behind the line, and he doesn’t create as much on the run. Now, you can put other forms of Deadeye on him to mitigate this somewhat, but Dashing Deadeye remains the most important version and he misses out.

Edmunds is a good Hero, but he does not have a Power Up as of yet. Without it he’s still good as a user card in coverage and as a run pursuer, but he’s not quite elite beyond the theme team. 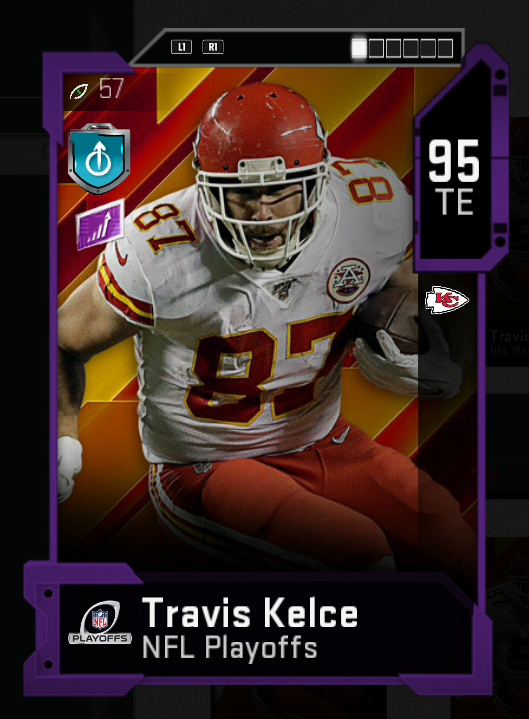 Analysis: Kelce has been a stable force for a lot of teams at various points this year, and now obviously you have a Tony Gonzalez/Travis Kelce double TE nightmare for a Chiefs theme team. That being said, Kelce doesn’t strike me as breaking the mold for TEs or anything like that. At this point, I think it’s down to personal preference with a lot of these tight ends, and also what you’re looking to get out of the position. Shady McCoy doesn’t have great speed and just seems out of place in this running meta with his stats. 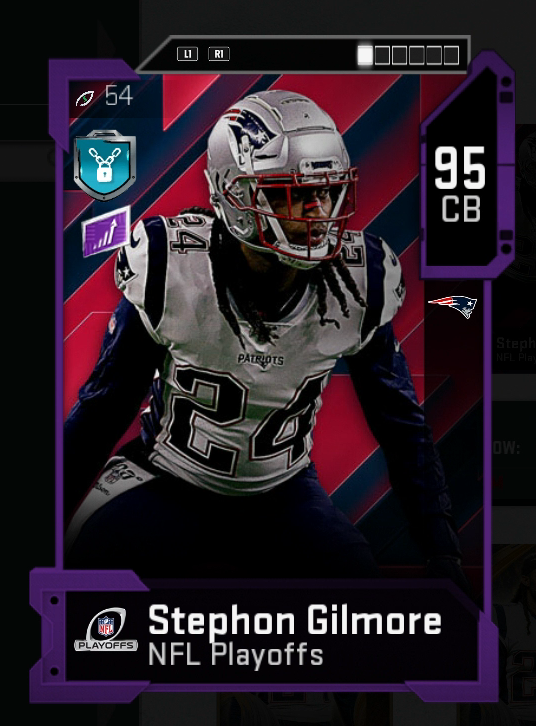 Analysis: Stephon Gilmore has great coverage stats, but that speed at just 90 is suspect. On theme teams this can be minimized a bit, and you can make it work, but I’m concerned. James White already has the 93 overall Ultimate Kickoff. This card is technically better because of the abilities he can pick up, but it’s an odd choice for a card.

Analysis: There’s a ton of good LTs in the game, but Stanley does have very good stats. Judon is a disappointment. Marquise Brown makes up for that because he has 97 speed, so he can certainly get boosted to 99 speed if you go down that path. His Rookie Premiere of course also got the upgrade so it’s a double-win on that front. 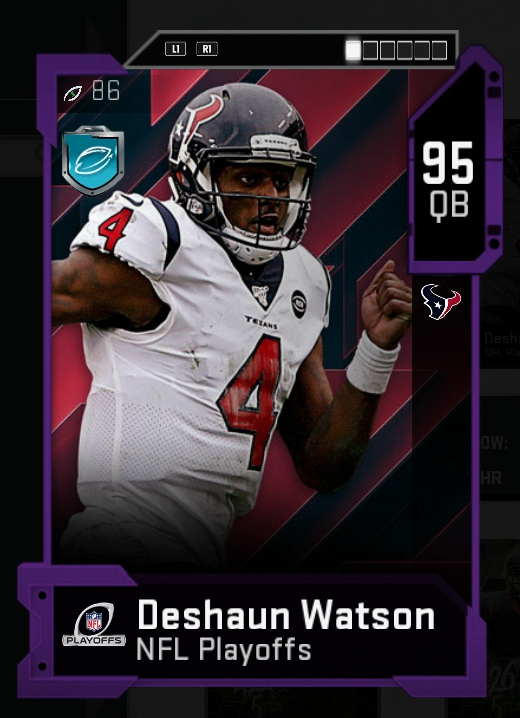 Analysis: Deshaun Watson has my favorite release in the game. It’s very fast and probably beats out — or at least competes with — Aaron Rodgers for best throwing animation. He is an Improvisor archetype and has 86 speed, low 90s accuracy ratings, and 92 throw power. This means he can get Dashing Deadeye and Escape Artist, but he does not have a Power Up as of yet. Regardless, this is a great quarterback and goes into consideration in the top tier. Nothing else from the Texans looks great. Also, I feel for all the investors who were banking on a DeAndre Hopkins card.

Analysis: Byard gets 97 zone coverage and 90 speed so he’s going to play as a coverage safety in pretty much any format. However, he’s not much of a hitter so that might mean he’s out for some people. Tannehill is the real show stealer here because it’s a massive upgrade for a Titans theme team. On top of that, he’s an Improvisor with 82 speed, 92 throw power, and low-to-mid 90s accuracy ratings. So he gets Escape Artist and Dashing Deadeye as well, and so he’s slightly more accurate than Deshaun Watson, but a little slower. However, his release is not as good as Watson’s (I think he has a generic throwing animation). 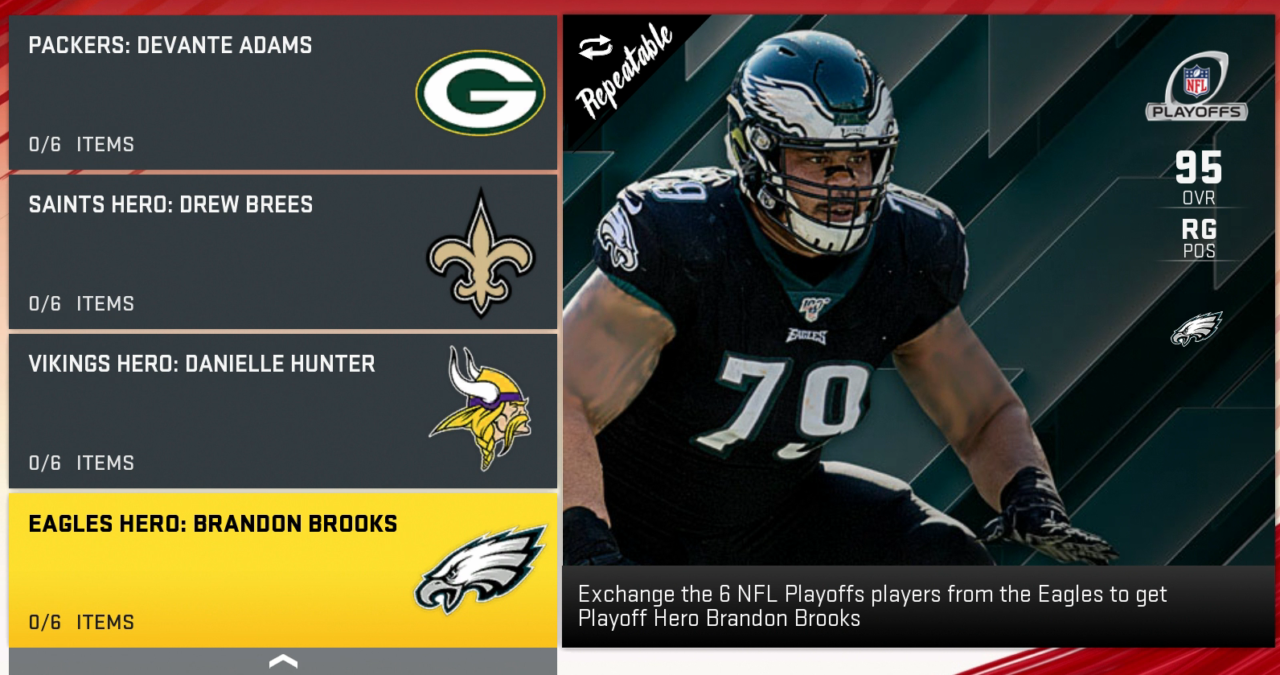 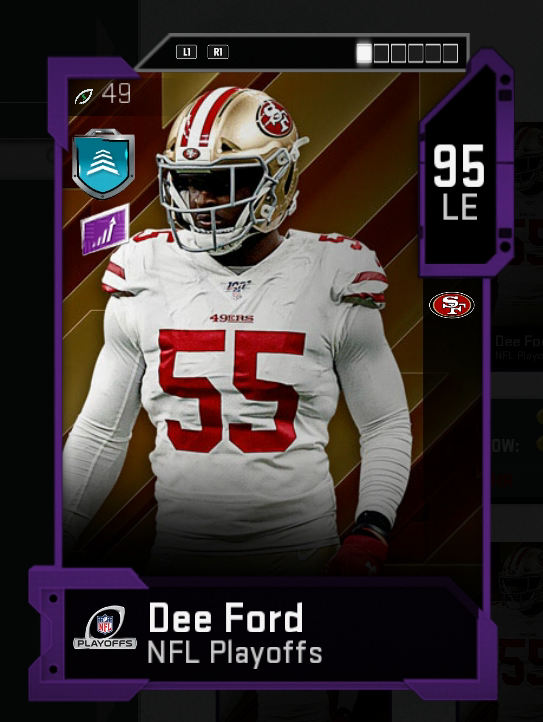 Analysis: Dee Ford would be amazing in a different game. He has great speed and pass rushing skills, but his block shedding is only 74. This means he’s a liability in the run game. That being said, he makes a good spy and will be able to run down QBs for sacks. However, it’s not ideal to have a “situational” 95 on your team. There’s not much else to be hyped about with the selections here, but we’ll get to TO in the Masters section.

Analysis: Brandon Brooks looks okay, but the Eagles don’t really need offensive line help. Malcolm Jenkins is just too slow to work at this point. However, Miles Sanders got a big upgrade, and he should really help an Eagles theme team that was hurting at that position. His receiving stats are not great, but he got some pretty generous rushing attributes to go with base 90 speed.

Analysis: Davante Adams has 97 release but just 90 speed. I think this means he’ll be really good on short routes but maybe not great outside of a theme team otherwise. Savage Jr. gets 93 speed and 93 hit power so he becomes a very good user option on defense. He also gets the Rookie Premiere upgrade as well (like Marquise Brown). He might be a little suspect if you don’t user with the safety a lot, but it’s a good upgrade either way. And, again, I feel for the Aaron Rodgers investors out there. 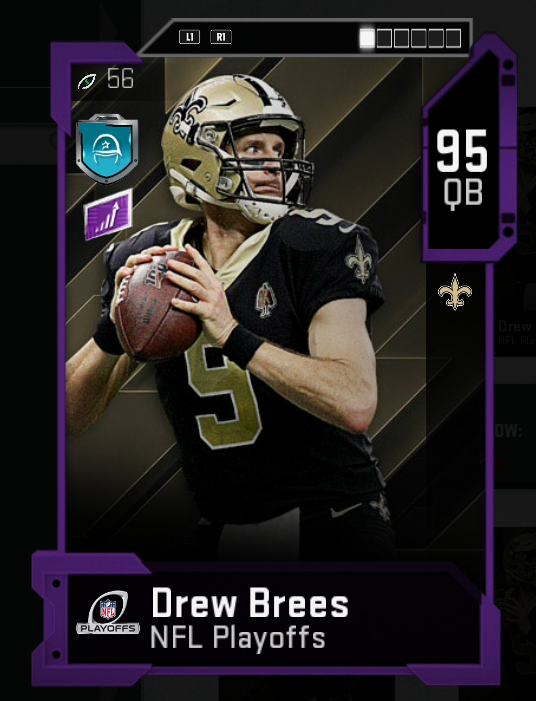 Analysis: Brees just doesn’t play to this meta. He also only gets 90 deep accuracy here. Overall, this might be the most disappointing selection for players.

Analysis: EA gets to Marshawn in a hurry here, and he’s getting treated like peak Lynch. It’s a solid running back, and is a good upgrade for the Seahawks theme team, but he’s not in the top tier otherwise. Shaquill Griffin has 94 speed and really good stats overall. He just needs a Power Up now to be an amazing CB option. For a third time, let me say I feel bad now for Russell Wilson investors. 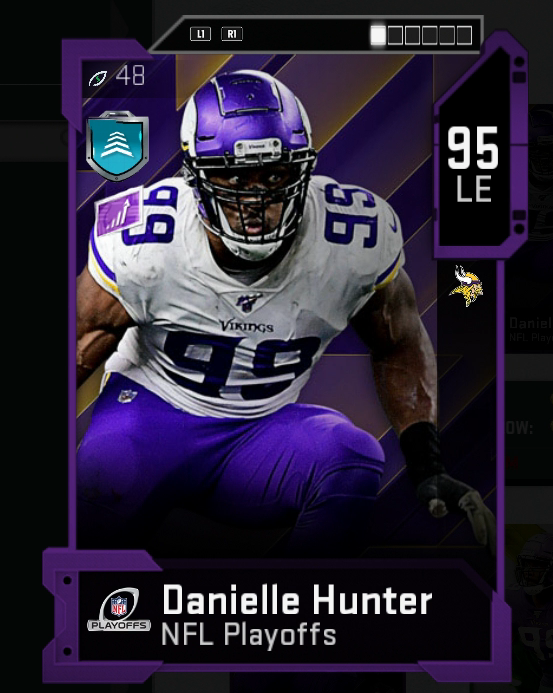 Analysis: Danielle Hunter looks like a very good card for the meta. He’s fast enough to get to the QB, and also has 89 block shed to deal with the stretch plays of the world. A very good looking card on most teams. Elsewhere, nothing else really stands out as the Vikings are already rich at DT, and Rudolph is a decent but unspectacular upgrade. 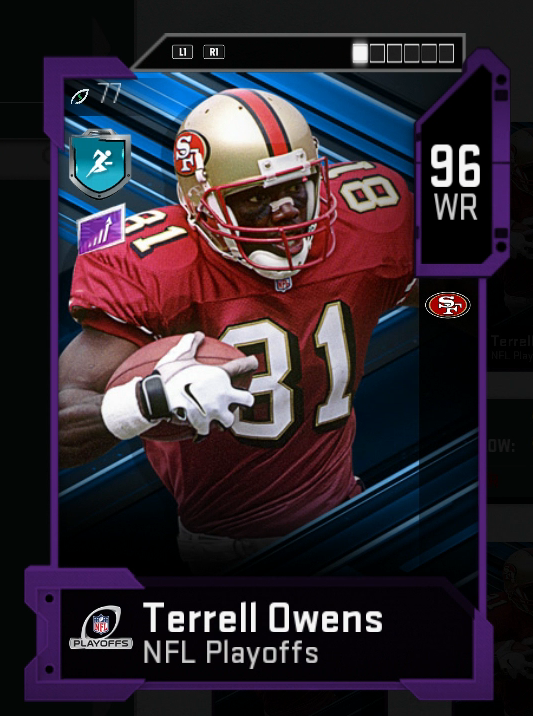 Analysis: With the Physical archetype, Owens may not be the perfect for some people, and some of his traits are not great. That being said, it’s a very good card. He does not get an X-Factor out of the gate like Randy Moss, but TO is probably the most complete WR in the game now stats-wise. He has 93 speed, 95 release and quality across the board. This is a great card. 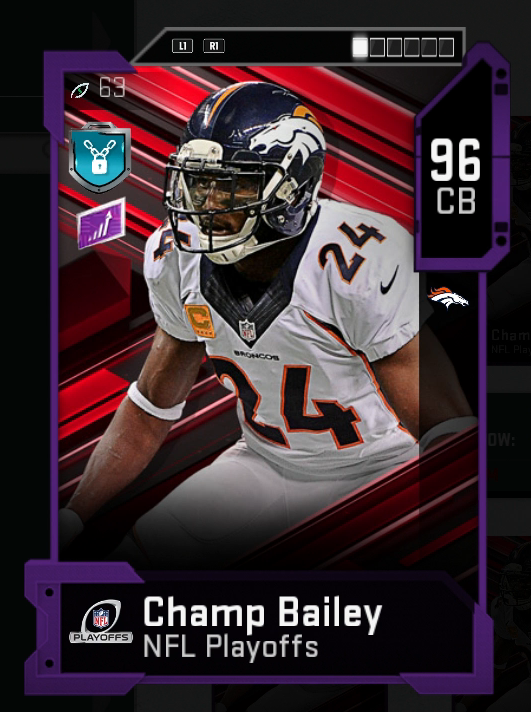 Analysis: Champ Bailey also comes in and may now be the most complete cornerback in the game. Again, he does not start with an X-Factor, but he has 94 speed, 96 man coverage, 91 zone coverage, 90 press, and also has very good return ratings. He can be used like Deion as a special teams returner and lockdown corner.

Overall, both Masters cards are worth getting if you can swing it.

We also got three Legends. Jordan Gross and Dwight Freeney can be acquired via sets when you exchange the five versions of them for the Boss version. Antwaan Randle El is just in packs as he’s the Limited for the weekend. You can get their Power Ups in the Solos.

Analysis: Randle El can get Human Joystick, so he’s another option for the Taysom Hill package. Freeney has 86 speed and becomes a very good edge rusher if you want to go down that road with him. Jordan Gross adds on to the riches we have at left tackle so feels a little redundant.

You can get an 89 overall non-tradeable 89 NFL Playoffs player if you get to 108 total Stars (this was first listed as a 95 overall but it was just an error by EA). 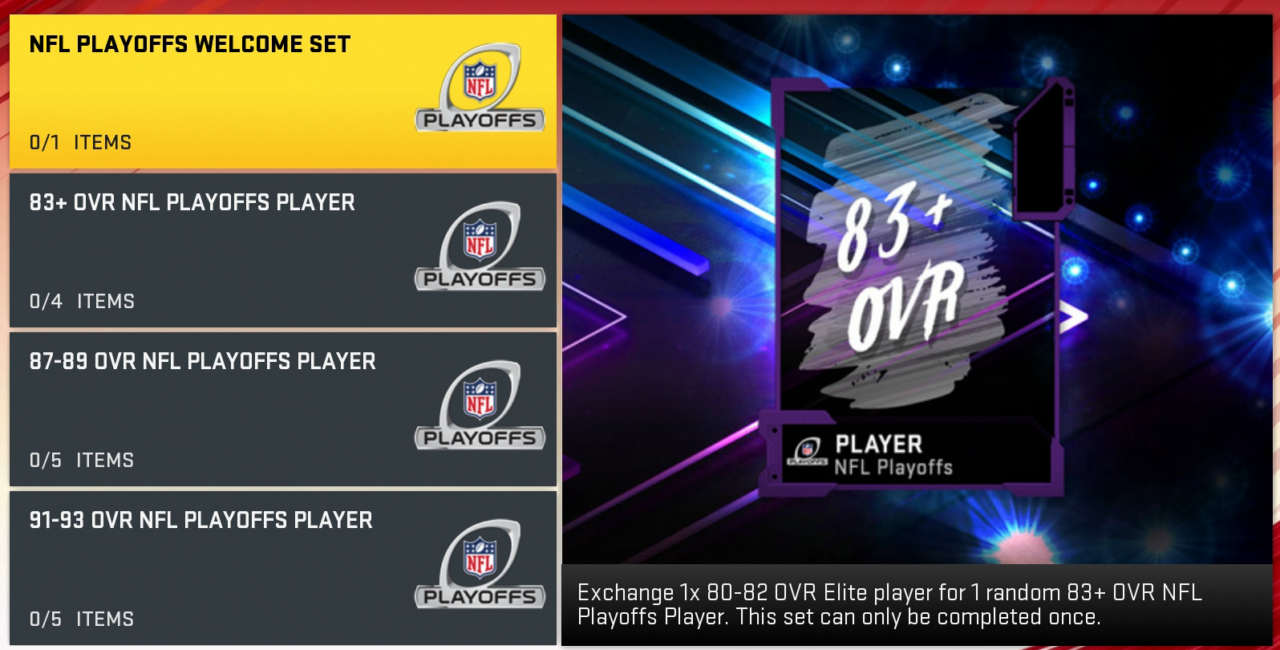 Nothing seems too crazy here for value, but be sure to do the NFL Playoffs Welcome Set the one time you’re allowed to do it.