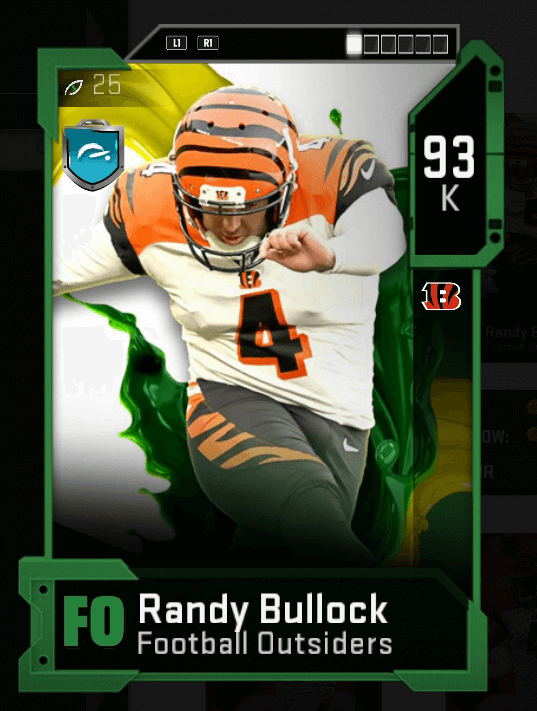 The MUT Football Outsiders December cards went up on Sunday, and it’s yet another disappointing release. The Football Outsiders cards have just been in a weird spot all season. It’s a lot of content, but it’s not really good content. The players are average at best, and some of the players don’t even really register on theme teams. In short, it just feels like the cards don’t have a place in the release schedule for Madden 20 MUT.

I’m not going to waste your time, so I’ll just say yet again the best players from the Football Outsiders cards are the kicker and punter. Bullock now has the highest kick power in the game, and that’s really the biggest change here. Cooke also has the highest kick power for a punter, but that’s not as relevant to things considering you don’t want to punt ever if you can avoid it.

The best “normal” card here is probably Harold Landry III, but it’s more because he has solid attributes and traits. He’s still not some awesome card for every team, but he looks usable on most squads if you get him somehow.

Anyway, I imagine we’ll be getting more exciting cards this week on the heels of the divisional round, so we’ll be back when that news pops up.

(Oh, and to be clear, I’m not saying these cards need to have insane stats to be interesting. It just doesn’t feel like these Football Outsiders cards even have a theme to them that makes you interested in scoping them out when they release. This is where my problem with them comes from — it’s not the ratings that are the issue.)