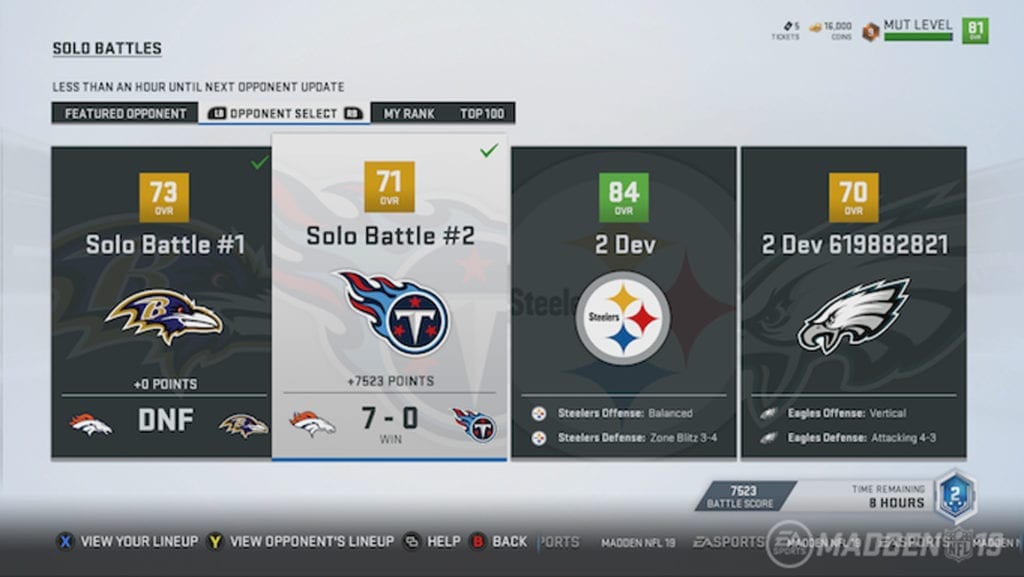 Anyone who has played a recent Madden game knows the emphasis EA has put on their ever-so-popular Madden Ultimate Team mode. Not only is it a popular feature among casual users, it is big in the competitive gaming world. In fact, lots of resources and time have gone into making MUT the staple of the Madden Championship series.

This is even more clear in Madden 19. Madden’s most popular game mode is now the cream of the crop, and it has surpassed CFM and other game modes respectively.

Here are the first things you should do when beginning Madden Ultimate Team in Madden 19.

The first thing you must do in Madden Ultimate Team is select which team you would like to replicate. In doing so, you will unlock this team’s playbook, stadium and uniforms. You will also be given the opportunity to select a player from one of the 32 NFL franchises. I found it helpful to decide which position you covet most and choose accordingly. Some of these players include Todd Gurley, Matt Stanford, Rob Gronkowski, among others. Choose wisely because this decision can make or break your Madden Ultimate Team.

MUT does a great job this year of balancing out the playing field. As someone who purchased the HOF edition for the Dan Marino MUT card, my team isn’t that much stronger than those who got the standard edition on August 10. The reason? Madden 19 makes it easier than ever to build your team with star-powered players.

After selecting my team-specific pack, I headed over to the individual challenges and started to immediately unlock the legends. These legends range anywhere from Reggie White and Lorenzo Neal to Sean Taylor, Steve Young, and everything in between. These players can be unlocked by playing a variety of different player-specific challenges and are fairly easy to achieve.

This is where I recommend spending the most of your time early on as it helps you fill out your roster with some of MUT’s better cards. You will be glad you did so.

There are so many different challenges to acquire players, cards and coins, with EA releasing new things daily. One of my favorite new features in this year’s game is the head-to-head challenges. The first of these I experienced was an “All T.O” team. Every player on this roster was Terrell Owens. That’s right, the entire offensive line, the punter and kicker, heck, even the QB was made up of all Terrell Owens cards. This was a nice new feature and kept things new and innovative. I look forward to seeing more of this in the upcoming weeks.

It is always wise to scour the auction house and do your due diligence on specific cards. Every minute new cards are added, and for the right price, could change the face of your MUT team. However, this isn’t always the best way to upgrade your team, and you could end up spending more than the card’s worth. In the end, if there’s a card you truly covet, do whatever is necessary to acquire it. Furthermore, using the auction house to sell off cards you no longer have use for is a viable option. This will help you earn coins to purchase packs and other cards, and help you get rid of cards you no longer need. I recommend finding out the card’s value on the open market before setting your minimum bid.

You can always do things the old-fashioned way and dig into your wallet and pony up the real-life cash money to get the cards you so desire. This is the easiest way to achieve Madden Ultimate Team success but also feels less rewarding. Not to mention, you already spent $60 on the game itself, so why fork out more money on players and other items when you can ultimately grind and land similar players? I get that there are some players who are just too hard to acquire or too appealing to wait, but ultimately you can achieve similar success by grinding it out.

When all is said and done, Madden 19‘s MUT mode is very similar to those that came before. Most of the cards are the same and some of the challenges, too. However, EA has put a lot of money into the popular game mode and it shows. Madden Ultimate Team remains the standard in the competitive gaming community, and adds an innovative dynamic to a seemingly stale online game mode. In the past I would begin playing MUT, only to slowly grow tired with the popular game mode. That isn’t the case this year, as I have already played more than I did in all of 2018. Maybe it’s just me, but I’m very happy with this year’s changes to Madden Ultimate Team.