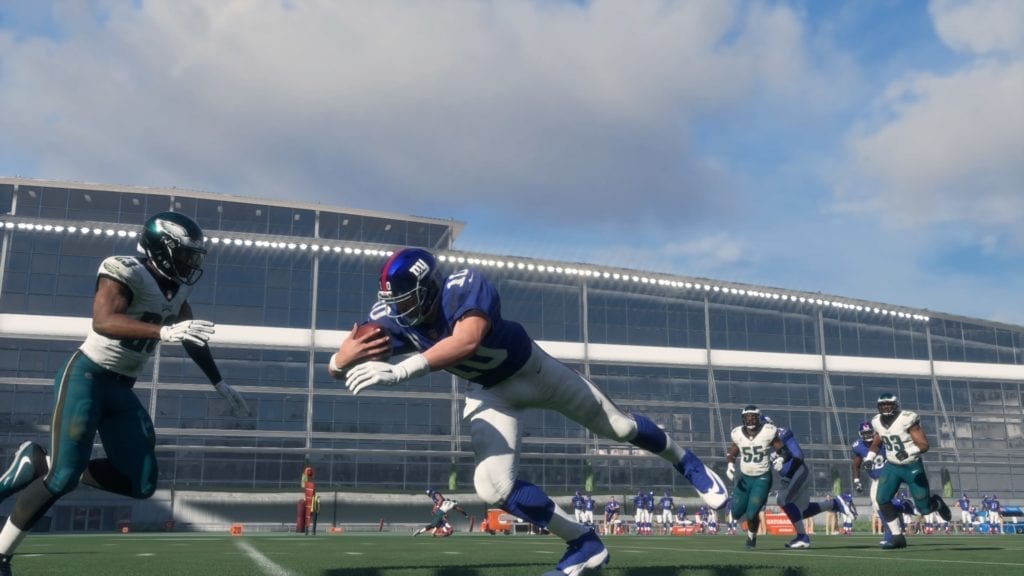 At the time of our last assessment of the state of Madden 18, the team at EA Tiburon had just rushed out a patch before evacuating their Florida offices on account of the impending hurricane. About a month has passed since then, and Madden fans have waited for a more comprehensive patch to remedy the multitude of annoying bugs, glitches and oversights that were keeping players from fully enjoying their experience with the game. Fortunately, their wish has been granted with the release of a much larger patch that was accompanied by a downright epic list of notes detailing what exactly had been improved about the game. With that said, let’s check out what areas of the game have been significantly affected by this patch, what areas still need improvement, and what problems have been more or less ignored at this point.

What is Working Better

Bubble Screens: A prime example of the kind of bug you wouldn’t usually expect to find in a finished game, let alone one that’s been out for more than a month, receivers running bubble screen routes will now actually, you know, run that route instead of just traipsing up the field like some stubborn baby who refuses to run the play.

QB Dives: Along the same lines, one of the more frustrating things that could be experienced within a pre-patch Madden 18 occurred when you were scrambling with your QB. You’d be running for a first down and make the fateful decision to try and stretch out with a dive to make the necessary yardage only to have your QB perform a more conservative slide instead and come up a little bit short. This is because there was no ability to dive at all with a QB prior to the patch. Luckily, this is no longer the case. Now if they could only find some way to have a QB slide or dive behind the line of scrimmage to avoid a hit and potential fumble.

Simulated Extra Points: A big problem, especially for anyone that was using the Play The Moments option for games, was that you would all too often score a touchdown only to learn afterwards that the CPU had bungled the extra point and you’d only got six points for your efforts. The glitch was due to extra points being simulated from the 35-yard line rather than the 15. Thankfully, this has now been addressed and the extra-point percentage of CPU kickers is now more in line with what you would expect to see in the NFL. The only question then is why this crucial fix wasn’t even deemed important enough to be included in the patch notes?

Squad Seasons: When Squads were first introduced with Madden 18, it seemed akin to a demonstration sport in the Olympics – it was fun to try it out but ultimately seemed like the results were rather inconsequential in the grand scheme of things. It’s not that you weren’t rewarded for your efforts with the requisite coins, but there was no tangible long-term objective to keep you motivated to play the mode. That’s why the addition of seasons within squads appears to be an affirmation that not only are people playing the mode, but that EA is committed to not letting the mode fall by the wayside as co-operative play in Madden has done in the past.

Hit Stick Fumbles: While it’s understood that people would like to get some sort of reward for being able to use the hit stick properly, it was clearly overpowered prior to the patch in how often it could jar the ball loose. The issue may not be quite as bad as it was before, but it still seems as if fumbles happen too frequently when employing the hit or cut stick. While it may be tricky at first to know how and when to use the mechanic, it’s extremely effective once you get the hang of it — there’s really no downside to using it. In real football, laying a big hit on someone may cause a fumble, but you’re also just as likely to see a ball carrier bounce off a tackler who fails to wrap him up. This is the kind of risk-reward it would be nice to see from the hit stick in the future.

Man Coverage: The only item included in the patch notes regarding pass coverage in Madden 18 was one to indicate that man coverage had undergone tuning to improve defenders in man getting beat deep by slower receivers, but it appears good corners can still get torched fairly regularly on not only deep routes when in man coverage but on those pesky crossing routes that have plagued man coverage in Madden for years. It’s enough to make you revert back to sitting in zone coverage as much as humanly possible, which was already ubiquitous when you played against people online last year in Madden 17.

Franchise: Perhaps it was foolish to expect that the patch would do much to improve upon a franchise mode that had already undergone what were largely only cosmetic changes from Madden 17 to Madden 18, but it’s still a little disappointing to see what has been offered for franchise users with this patch: more minor cosmetic changes. From improvements to the still-boring Twitter feed to the re-appearance of a missing arm sleeve, perhaps the most notable update to franchise mode is a correction to the amount of XP needed to purchase traits.

Penalties: It’s one thing for Madden 18 players to expect to not have too many penalties on arcade or perhaps even competitive mode, but anyone who enjoys a true simulation experience is likely to be left wanting to see more flags thrown during a game. Of course, it’s possible to adjust sliders in order to coax more penalties out of the refs on a regular basis, but those sliders are not (nor have they ever really been) as responsive as you would like. For instance, if you tune to increase the frequency of a certain penalty as far as it will possibly go, you would think that you would then see the penalty called every few plays (or perhaps even every play if we’re maxing it out and hoping for some real results), but you’re more likely to see just a small uptick in the number called rather than the deluge you might expect.

Instability: Though it seemed to be more of an issue with people playing on Xbox rather than PS4, there were many reports of Madden 18 spontaneously crashing when cycling too fast through screens after installation of the patch, sometimes also leading to corrupted save files. It also became apparent that some players were experiencing a glitch that caused the screen to shake so badly that it would become quite difficult to see what was actually happening on the field. Because of this, EA released an update to the patch (or a patch for the patch, if you prefer) that essentially undid an attempt to fix some unfortunate lag that franchise players were enduring, as the first patch was deemed insufficient to correct the issue and actually was the cause of the aforementioned shaking.

Wind: This isn’t exactly a surprise or anything given that Madden has had a wind issue for some time now that hasn’t been addressed, but it would still be nice to finally see some tweaks to the way it works. Contrary to the way wind currents are portrayed in Madden, gusts in real life don’t continuously occur at the exact same force throughout a game, but rather are usually fluctuating wildly all the time. Furthermore, it’s one thing to have to deal with some disruptive gales while playing in New York or Chicago (the windy city, after all) but it’s quite another to see wind regularly have such an extreme effect when playing games in Oakland or Los Angeles.

Suffice to say, Madden 18 isn’t exactly perfect at the moment and there are sure to be more patches to come in the near future, especially one to rectify the lag issue that this most recent patch failed to fix. It’ll be interesting to see how much these subsequent patches continue to focus mostly on Madden 18’s Ultimate Team mode, as it appears to be in EA’s best interests to make sure the players that are providing the company with extra revenue through micro-transactions to improve their teams are kept most satisfied of all.

While this is sure to be frustrating to anyone who enjoys playing Madden 18’s other modes (especially franchise players, who certainly feel as if they have been getting shorted for some time now), the one thing that must be said is that Ultimate Team is actually quite a bit of fun if you enjoy playing against online opponents. There are so many different modes alongside an overwhelming amount of options and regular updates that, aside from the endless attempts to get you to pump real money into the game, the game will keep you interested for as long as your free time will allow. There’s never been more incentive to climb the ranks through seasons and try to square off against the best Madden players the world has to offer in MUT Champions and the Weekend League. If you have the skills and are willing to put in the effort, there’s now a tangible sense that you can actually become a fixture in the Madden community, where you eventually can perhaps even make some real money.