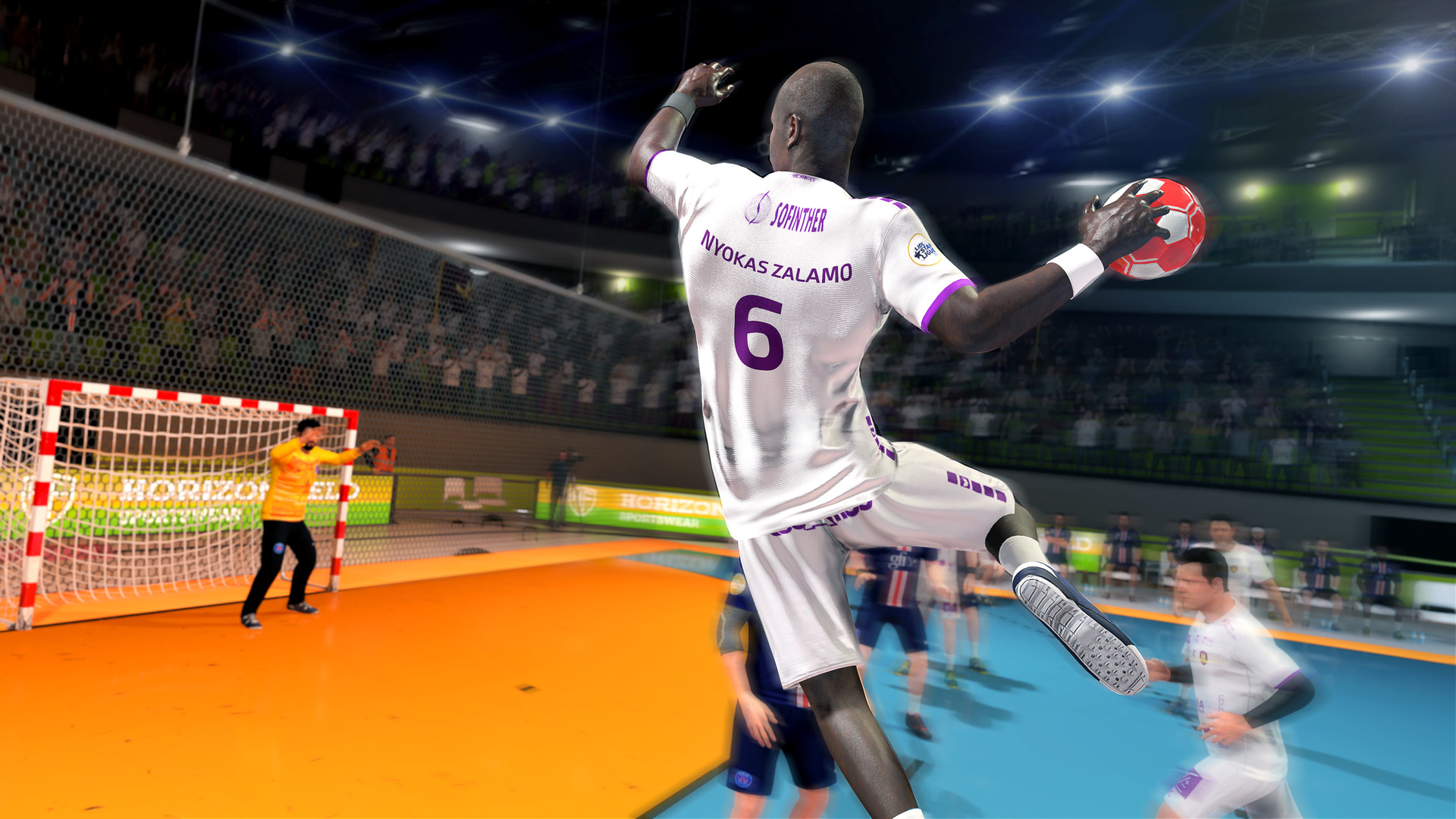 Heading into this Handball 21 review, I didn’t know what to expect. Yes, I knew that the sport originated in Berlin, Germany in the early 1900s (thanks Wikipedia!). And sure, we all played it once or twice in Elementary school. I maybe even stumbled upon a few highlights here and there while skimming through the sports channels. But I don’t know that I’ve ever sat down and watched a game of handball, even during the Olympics.

This was going to be an interesting experience.

Research informed me that the last game that was created was Handball 17, so simple math says this is the predecessor to a game about four years in the making. Unfortunately, I didn’t play Handball 17, so for comparison’s sake the score Operation Sports gave the game way back on December 8, 2016 probably does not matter (especially considering we don’t even do scores anymore).

It’s also worth noting that EKO Software created Rugby 20. So, while this might not be a big studio compared to the EAs and 2Ks in the world, this isn’t its first rodeo. Now, let’s boot up the PS4 and dive into my review of Handball 21. 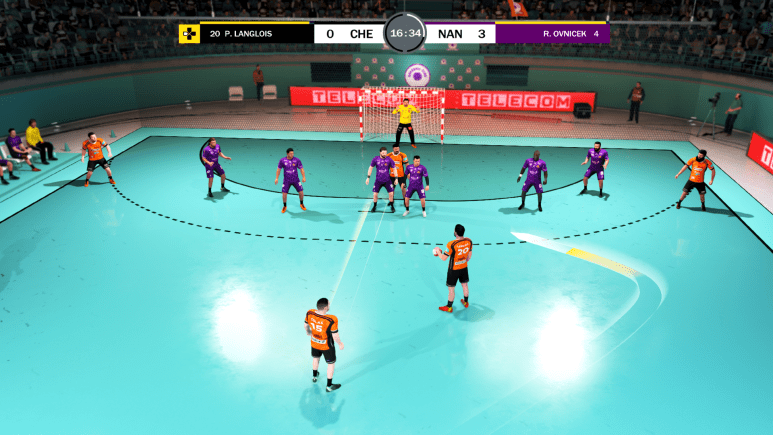 With any sports video game, success can often be determined by how realistic the game is to its real-life counterpart. Part of that starts with the little things. For games like FIFA and NBA 2K, keeping up to date with the latest players, uniforms, arenas, rules, etc. is critical in making a successful video game.

As I said, I’m a noob to handball. So, I can’t sit here and pretend to know who the top teams and players are in the sport. Thankfully, that’s what the official Steam page is for (or the internet), which lists the following leagues as playable in this year’s installment.

“Play with the best teams from the top leagues, including the French LIDL STARLIGUE and PRO LIGUE, the German Liqui Moly Handball-Bundesliga and 2. Handball-Bundesliga, the Spanish Liga Sacyr ASOBAL, and for the very first time, the Polish PGNiG Superliga.”

It also helps that this is a sports game, and as we’ve come to expect over the years, all teams and players have their own unique ratings. Top teams like PSG, Fuchse Berlin and others seem to have a bit more authenticity to them. But what’s best about Handball 21 from my time with the game is that if you’re a fan of the sport, you’ll at least feel like you’re watching a real-life representation of the sport on TV. And as we see from even some of the biggest gaming companies, this isn’t always easy.

Player models and graphics are okay for a PS4 game, but I wasn’t really expecting them to be on par with some of the bigger names in sports gaming anyway. This may be something they can eventually improve on, but never once did I feel as though this game was being held back from a graphical standpoint. One of the first things I noticed after booting the game up was how similar the menus looked and felt to FIFA or Madden. The game modes are straight forward and what you’ve come to expect in sports gaming. There are three main game modes that include single-player mode, online and League. There’s not a whole lot of distinction between a “league” and quick match, but if you’re looking to chase a title, what’s stopping you?

Another thing that really impressed me is how quick and easy the controls were to learn. No, they weren’t perfect and I’ll dive into some of my issues with the controls in the second part of this review. But before we get into that, I have to take time to address my favorite part of Handball 21. And that, like most sports games, is playing offense. Or in this case, shooting.

Players can aim where they want to shoot (similar to FIFA) and have a few different shot variations at their disposal.

But the truth is, I would get way too excited for every scoring opportunity that came my way. And although it doesn’t offer the same strategic feel as you might be hoping for if you’re a fan of the sport, it does a nice job of doing what’s most important: giving users control when the ball is in their hands.

Shooting feels nice, but does take some time to get the accuracy down. Players have a variety of different shots at their disposal. My personal favorite is the jump shot, which finds the back of the net more times than not — as I’ll touch on momentarily here. 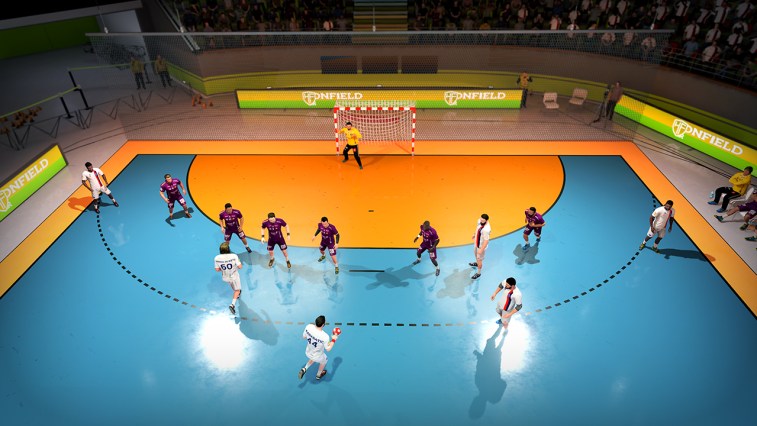 For as much fun as playing offense was, the opposite can be said for the defensive side of things. First, the game slowed down tremendously on fast breaks and in other areas of the game. This allowed for no real counter-attack despite how prominent it is in the sport. It also felt nearly impossible to break through the opponent’s wall of defenders. And any time you got close, you were pushed back with a weird animation that felt more like I was being attacked by my toddler.

Unfortunately, besides a tipped pass, rare steal or immaculate save, there wasn’t much you could do to keep this a low-scoring affair. However, one of the most entertaining parts of the game is watching the goalkeepers try to make a stop. Users are prompted with choosing left or right to make the save, which often leads to a random try at a kick save.

Player animations often seemed clunky and could definitely be fine-tuned in the future.

Close But No Cigar

While there is enough good to make this game playable for handball diehards, there’s still a lot of work to be done. Games need to move at a more fluid pace, and the defensive gameplay needs to be completely revamped — if possible. Handball isn’t a major sport like some of the games mentioned above in this article, and it shows. Way too often, games would feel more like a chore than they would a world-renowned game. Heck, I’m not even sure I would appreciate the little details that make the sport so internationally liked, but I definitely felt like it was missing something.

If you’re a die-hard fan of handball or even someone who enjoys the sport as a casual fan, I would say it’s worth a rental or a purchase — once most of the bugs are fixed or the inevitable price drop. And though it might not truly bring the game of handball to life, it’s about the closest representation of the sport we’ve seen in a video game, and that should make fans excited. Games can be fun and entertaining, at least with the ball in your hand. And for those familiar with the sport, I think you’ll be happy with how accurate some of the team’s and ratings are.

In the end, no matter how hard Handball 21 wants to be among the sports gaming elite like MLB The Show and NBA 2K, it still has a long way to go. This isn’t to say it’s not well on its way to being THE handball video game on the market. If you can push through some of the gameplay imperfections and uncertainties on the defensive side of the ball, you just might find yourself having fun.

Handball 21 does a nice job of doing the little things and making a noob like myself feel like a lifelong fan.

Liftoff: Drone Racing Review - Everyone But Fans of the Sport Need Not Apply
Madden 21 Next-Gen Review - Not a Revolution But a Solid Gameplay Base