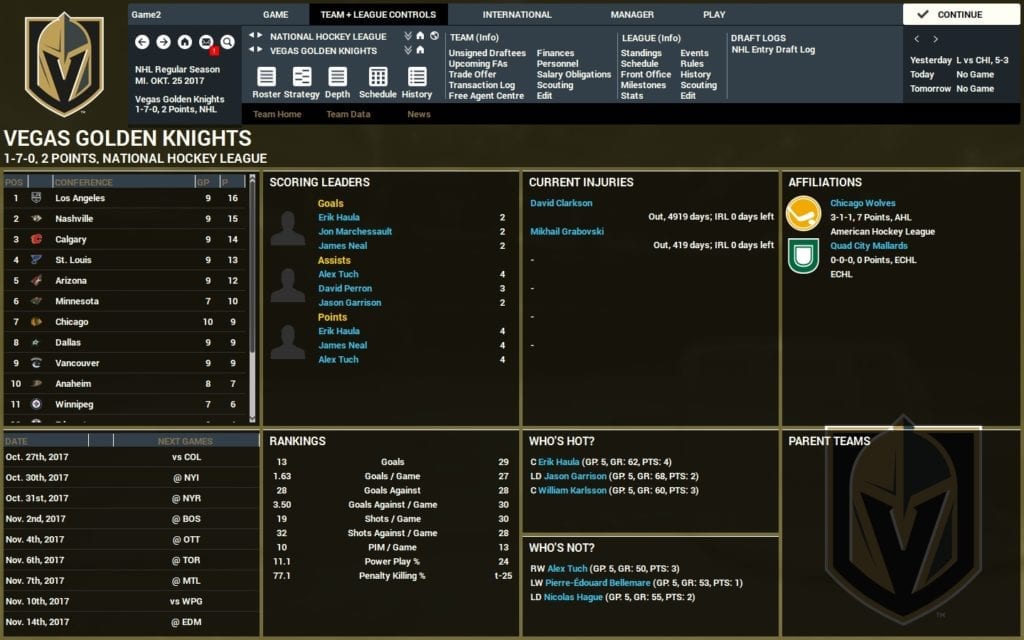 The National Hockey League is expanding this year with the addition of its 31st team, the Vegas Golden Knights, and the team will be included in Franchise Hockey Manager 4, which is available for pre-order now. You’ll be able to take over the team with the players it chose in the real life expansion draft or roll the dice and see if you can build a better club.

The re-draft option steps into the shoes of Vegas management on expansion draft day, allowing you to choose from the players who were actually available to them on that date.  The expansion draft rules require some careful planning, as the Golden Knights can only take one player from each of the established teams.

Or, if you prefer, you can start with their actual 2017-18 roster. Like most expansion teams, expectations in their first season will be modest.  There are a few recognizable names on the roster, including 10-year veteran and former all-star James Neal, 12-year veteran winger David Perron, and three-time Stanley Cup-winning goalie Marc-Andre Fleury.  But the future looks brighter, as the team has already built up an impressive stockpile of prospects and draft picks.

However, as FHM 4 producer Jeff Riddolls noted in an interview, “there aren’t many ways around having a rough time in 2017-18” if you take the helm of the Knights. But that can be turned around faster than you might think.  If you want to have success heading into the following season, betting all your chips by maxing out your spare salary cap space on the 2018 free agency market is a high-risk, high-reward strategy.

A slower build might be safer in the long run, however, even if that means angering your bosses and frustrating the fans for a few years. “Stagger the age ranges on your team, even if that means trading a few of the very young guys for slightly older players,” recommends Riddolls. “That should get you into a healthier long-term salary structure that’s less boom-and-bust, because one bust is probably enough to cost your job.”

The Golden Knights make their regular-season NHL debut in Dallas on October 6, the same day FHM 4 will be officially released.