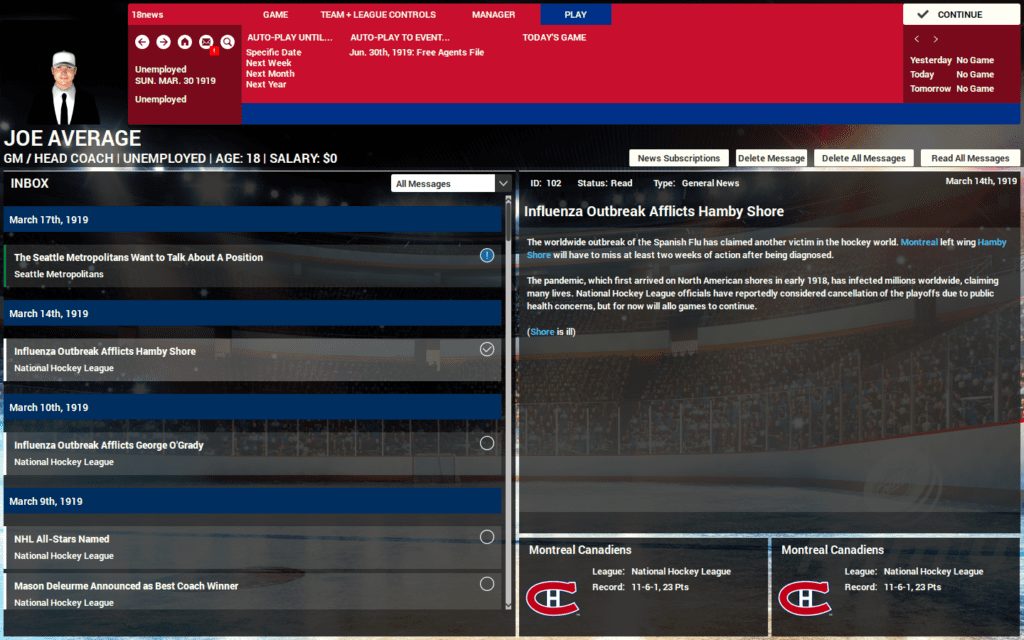 Out of the Park Developments has included storylines in their flagship game Out of the Park Baseball for a few years now, so it was inevitable that the feature would make its way into Franchise Hockey Manager, whose fourth version is available for pre-order now. Of course, FHM 4 puts a hockey focus on the storylines.

FHM 4 producer Jeff Riddolls noted in a recent interview that storylines in FHM 4 add “all sorts of unusual events to the game – from players getting involved in off-ice businesses to freak injuries at home. It’s a very flexible system and we’re just getting a feel for everything that can be done with it — I’m having to rein myself in a little because it’s easy to get carried away adding new things. We’ve got about 75 different storylines so far, with many having multiple branches, and we’ll keep adding more.”

For example, if you’re replaying the 1918-19 season in FHM 4 – which is possible since all historical NHL seasons are now available in the game – you may wonder if the infamous Spanish Flu epidemic that caused the league to cancel the Stanley Cup Final that year could happen. It can. While it won’t cause the Final to be cancelled, it will knock many players off their teams’ rosters.

Other stories include players opening night clubs, restaurants, and wineries. In another storyline, a team films a commercial to promote their upcoming season and sees their league pick it up for its own TV network. However, the move backfires in the team’s face when fan backlash causes the network to yank the spots. “I guess I’ll have to keep my pranks for the locker room,” says a player.

One storyline even features the fallout from a scout’s confidential remarks about a player who might be cut, which are overheard by a waiter in a restaurant and passed on to a local newspaper. Like other storylines, it can have an impact: the player in question takes a hit to his morale and loyalty ratings, which can in turn have a small effect on his play on the ice.

As with FHM 4’s other new features, look for storylines to grow in the years to come.