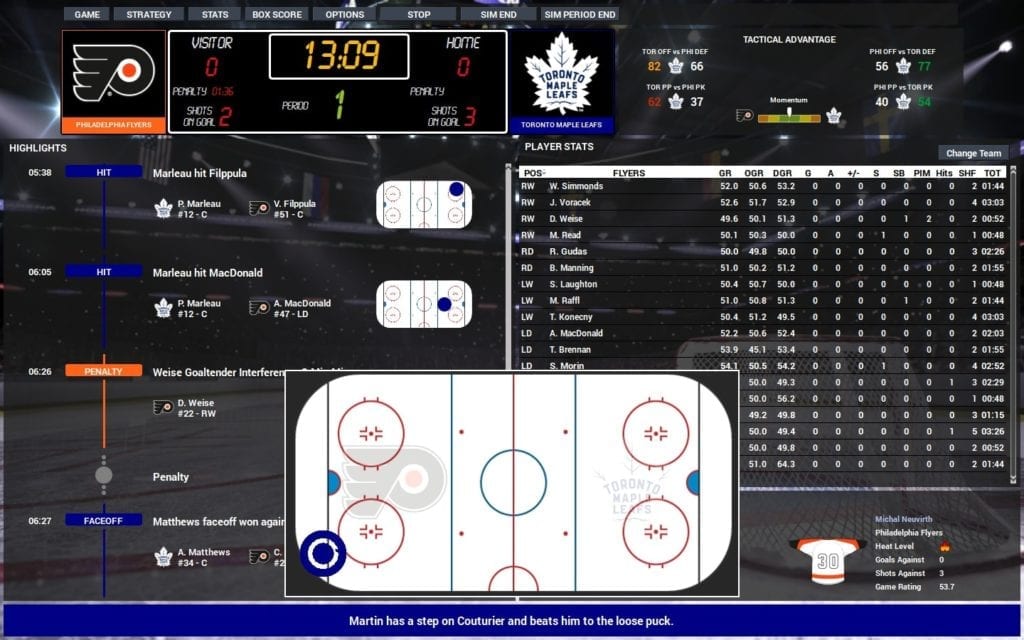 Franchise Hockey Manager 4 is available now for $35.99 on Steam, featuring every NHL team and season history, including the expansion Vegas Golden Knights and much more.

OOTP Developments today announced that Franchise Hockey Manager 4 is now available worldwide. FHM 4 is officially licensed by the NHL®, packs even more features than any of its predecessors, and takes the series to a whole new level in terms of realism and gameplay. It also contains every single team and season in the long history of the NHL®, offering an unprecedented amount of content.

FHM 4 sells for $39.99 and runs on PC and Mac through Steam, the OOTP Developments site, and other online retailers.

Take over a team in one of over 24 playable leagues that feature real current rosters based on countless hours of detailed research into player ratings. In addition to the National Hockey League® license, which gives FHM 4 real logos, uniforms, and histories for all 31 teams, the game features North American minor leagues, Canadian major junior leagues, and multiple levels of European hockey leagues.

Yes, you can roll the dice with the new NHL® expansion team, the Vegas Golden Knights™. Take control of the team as it was built through the expansion draft or return those players to their original teams and remake the Golden Knights™ according to your strategic vision.

FHM 4 features even more ways to set up a league. In additional to pre-configured structures, choose the number of conferences and divisions in your league, its schedule length, and the number of teams.

The most hockey ever

Travel as far back as the 1917-18 season and enjoy historically accurate rosters, including the early major leagues in western Canada! FHM 4 puts more hockey history at your fingertips than any game ever released.

In addition, try one of FHM 4’s 30 new historical challenges (one per NHL® team) and see if you can repeat, or improve on, such successes as Montreal’s 1950s dynasty, Philadelphia’s 1970s expansion wins, and Vancouver’s wild ride to the 1982 Stanley Cup® Final!

You can also put your hockey smarts to the test in the modern day with Challenge Mode, a new twist that pushes you to compete and win even when the odds are stacked against you. It’s a spin on the popular Path to Glory Mode, which is now available in every aspect of FHM 4.

You can now take the top-level view in all game types and make changes as you see fit.