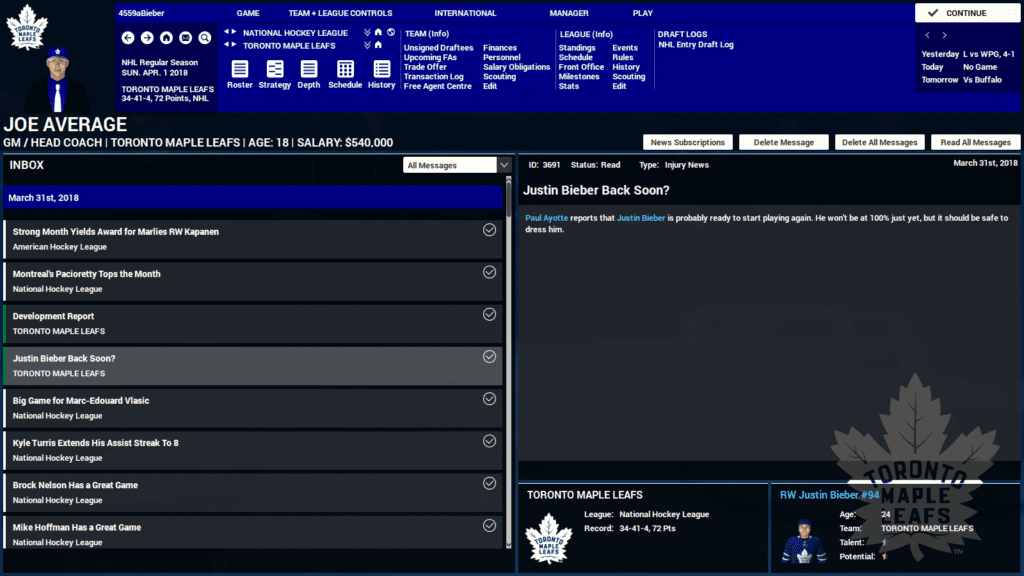 This is a guest post provided by Jeff Riddolls, FHM 4 producer.

Ever wonder how Justin Bieber would do playing in the NHL? Unless you’re Bieber himself, probably not. But I thought it’d be fun to try, and working on a new data update for Franchise Hockey Manager 4 gave me the chance to simulate the result in a realistic way.  I added him to the database, dropped him onto the first line of the Toronto Maple Leafs for a full NHL season, and recorded the results.

If you’re wondering why him, Bieber is a legitimate hockey player.  A product of the Stratford, Ontario minor hockey association, he’s been on the ice for a Leafs practice in 2011 (https://www.youtube.com/watch?v=aV8iUnsXLrM), plays recreational hockey occasionally, and, in late November, surprised the Whistler Winter Hawks Midget A1 team by joining their practice, scoring a couple of times in a scrimmage (https://globalnews.ca/news/3881765/justin-bieber-whistler-hockey-practice/).

That level of hockey is very close to the bottom end of what the game can simulate properly, so it was possible to assign somewhat realistic game ratings to him when I added him to the database.  At 23, he’s roughly at the level of a competent 15-year-old youth player, albeit one without much of a future in competitive hockey.  The Leafs practice video shows a decent, slightly awkward, skater with some puck control issues but a reasonable shot.  I tried to replicate that in the game, making him a shoot-first right winger without much of a physical presence (not surprising, at 5’9″ and 143 pounds) or defensive skills. 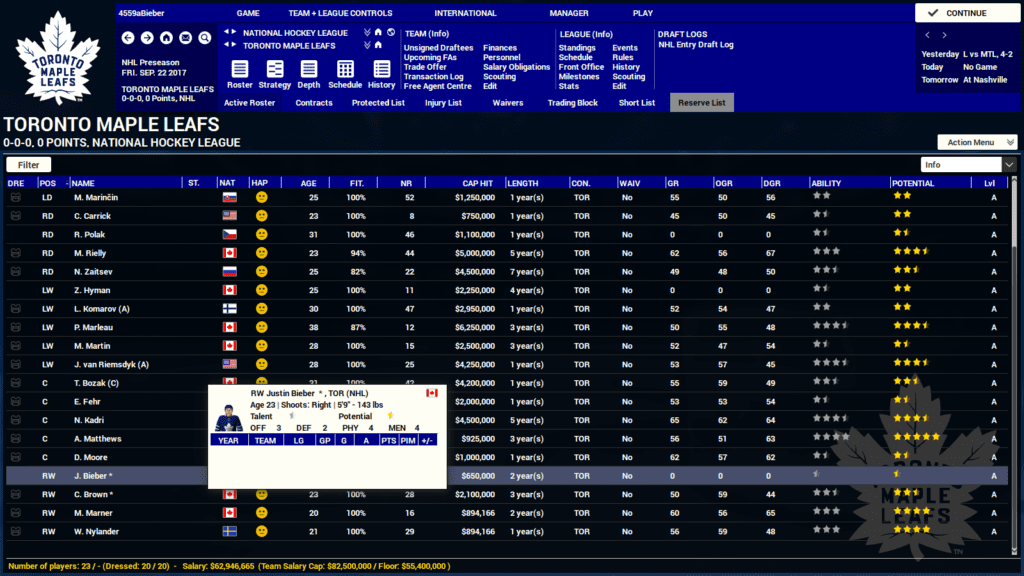 As the Leafs’ General Manager, I offered him a contract at the league minimum salary of $650,000, and he was happy to accept.  He was slightly less happy when I had to turn down his request for the number 20 uniform, which was already the property of veteran center Dominic Moore; however, that was the closest he came to having a morale problem during the season.  For the most part, he was just satisfied to be playing for his favorite team.

Had I left the game’s AI to control the lineups, it’s unlikely he’d have ever seen the ice.  So, I took over coaching duties and inserted him into the first line alongside Auston Matthews and Patrick Marleau.  In an effort to keep the Leafs somewhat competitive, I limited his use to even-strength play only, letting the real players handle the special teams.  I also adopted fairly simple offensive and defensive tactics to avoid overcomplicating his role.

It was apparent early on that conditioning would be an issue.  As grueling as a tough concert touring schedule might be, an 82-game season surrounded by world-class athletes is a long step up from there.  In the preseason, Bieber generally headed for the bench well before his linemates came off the ice, and his performance tended to decline during the later stages of games, despite the ample rest time afforded by skipping special teams play.

The regular season didn’t start too badly.  Seven games in, Bieber registered his first NHL point: a second assist on a Marleau goal set up by Matthews.  That turned out to be the winner in a 5-0 Leafs shutout over Detroit.  Not surprisingly, it was during the first period, with his legs still relatively fresh.  He also picked up his first penalty in that game, an interference call early in the second.

Through the first ten games, the Leafs managed to do pretty well, going 7-3 despite the limited offense coming from a third of their top line.  Bieber’s individual stat line, though, was sparse: aside from the Detroit game, the only other statistic he managed to pick up was a single shot on goal against Carolina in the tenth game.  Other than that, he had no statistical impact in any other category. 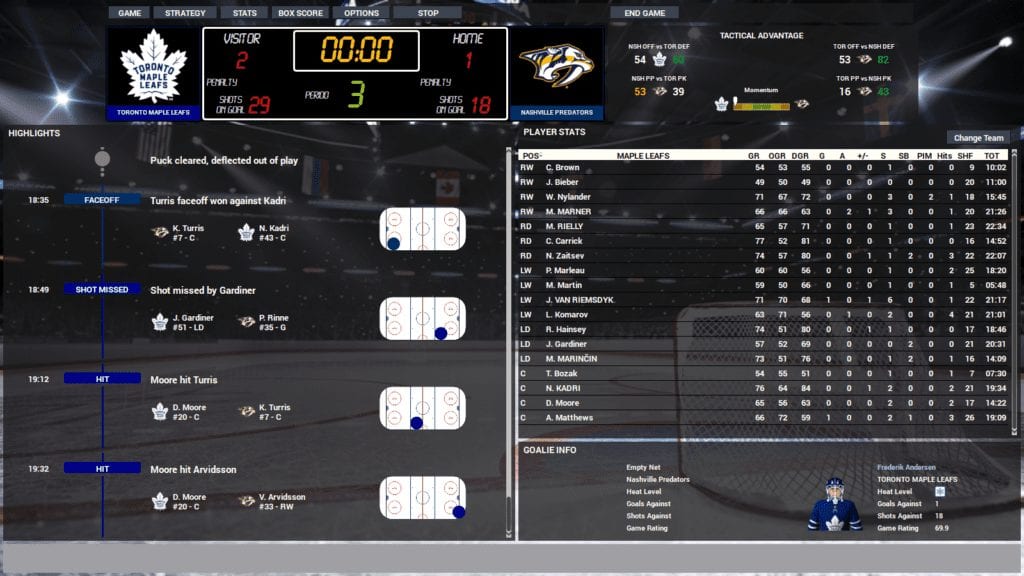 The Rugged NHL Season Brings the Biebs Down Down to Earth

Game 11 saw his first big mistake: attempting to line up his first hit of the year, he instead delivered a nasty headshot to Philadelphia Flyer Travis Konecny, who only stands an inch taller than Bieber.  That cost the Leafs a five-minute major, allowing the Flyers to score twice on the power play en route to a 3-2 win.

The fitness problem continued to plague him throughout the season; not only was he running out of gas playing 10 minutes a night, he was having trouble recovering between games.  Eventually, just before Christmas and with the Leafs barely hovering above .500, a rest was mandated and he was benched for a game.  Between that and having a few days off for the holidays, he finally managed to return to 100% for the first time.  After that, I decided to program in some rest for him for the rest of the year, sitting him out in the second game whenever back-to-back games were scheduled so he’d have a chance to recover.

But a second issue was also becoming clear: the empty stat totals after most games made it obvious his linemates were reluctant to let him handle the puck.  Even when he could get clear of a checker, the puck usually wasn’t coming his way.  His giveaway total was the lowest among the Leafs regulars, simply because he was getting so few chances to carry the puck that opponents had no opportunities to take it away from him. 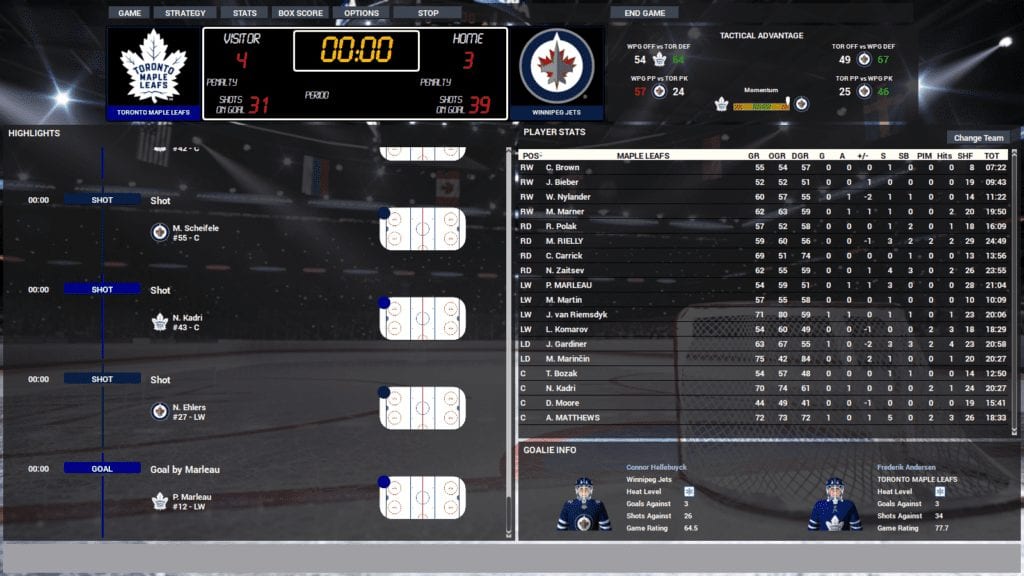 The Fans Want to Belieb, Give Him the Puck!

When Marleau was sidelined with a minor injury in mid-February, I decided to experiment with forcing Matthews to get the puck to Bieber a little more often.  I dropped tough guy Matt Martin into Marleau’s spot; with only three points so far this season, he presumably would make Bieber a slightly more attractive target for Matthews.  Bieber did become a little more lively in his next game; unfortunately, it wasn’t in a productive way as his first period with the new linemate saw him pick up a pair of minor penalties as Toronto lost 3-2 to St. Louis.

The other three games Marleau missed saw Bieber returning to his typical 0-filled stat line, so once Marleau was healthy again, I abandoned the experiment and restored the original Marleau-Matthews-Bieber line. 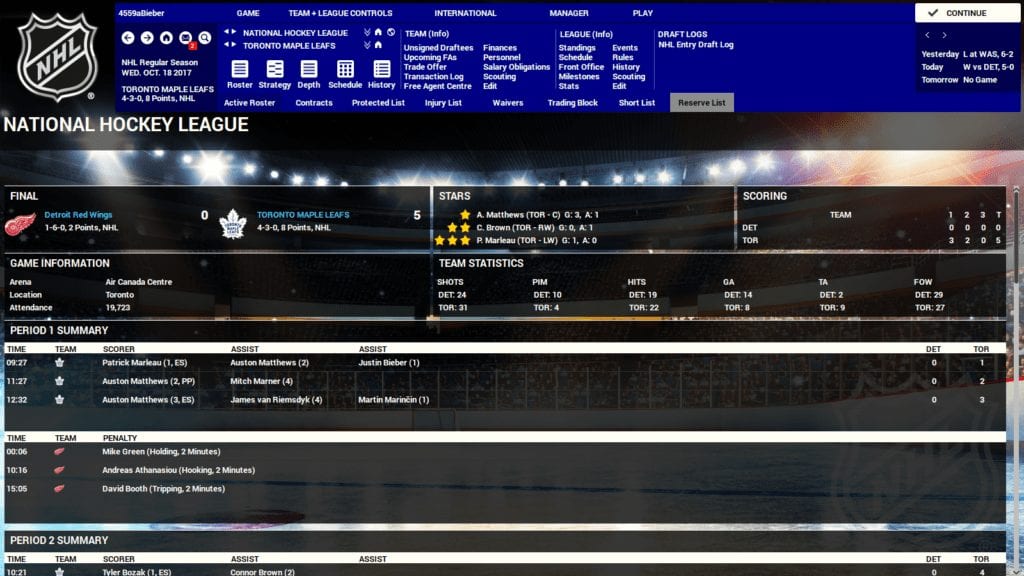 Still Looking for a Goal

With ten games left in the season, the Leafs a dozen points out of a playoff spot, and Bieber still with only his single assist, I decided to allow him some power play time.  That didn’t go well, either; he went pointless in his first game, then had a disastrous night against Nashville, where he was on the ice for three Predators goals in a 5-1 loss, and had to leave the game in the third period after complaining about blurred vision following a glove in the face from Pontus Aberg.  After the game, the injury was diagnosed as a corneal abrasion, leaving his status for the remaining eight games of the season (and chances of finally scoring a goal) in doubt.

He turned out to be a quick healer, making it back with three games left.  The eye may have still been bothering him, however, as the two shot attempts he managed in those final games both missed the net, ending his year without ever scoring. 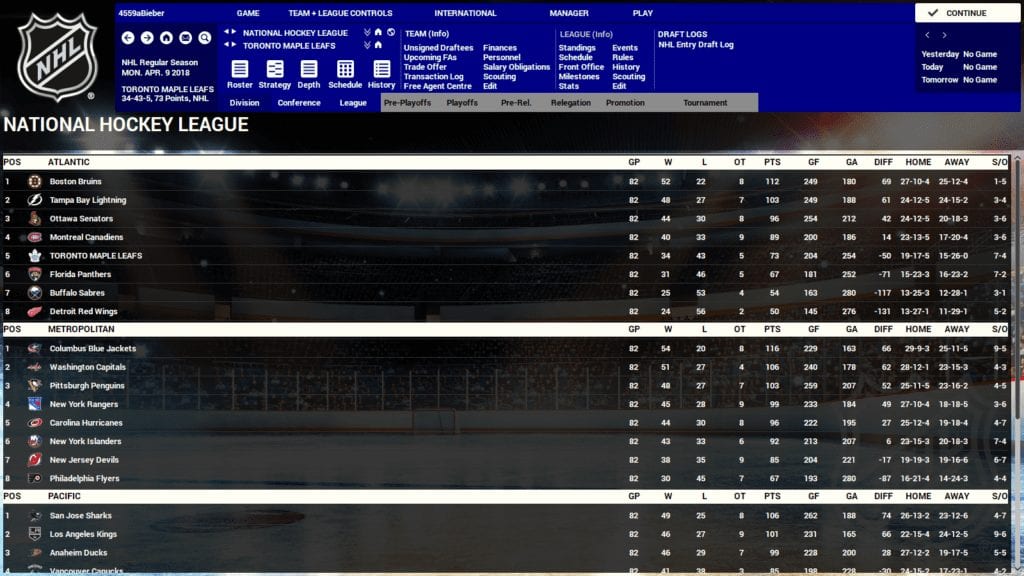 A Look Back at the Year of Bieber

His final stats for the season: 71 games played, 0 goals, one assist, plus-minus of -14, and 49 penalty minutes (20 of which came from a pair of ten-minute misconducts after arguing penalty calls).  He did manage to put 11 shots on target, and threw nine hits, had seven giveaways (but no takeaways), and went 0-6 on face-offs.  The Leafs, who should have contended for the divisional title, finished a disappointing fifth with 73 points.  Auston Matthews, to his credit, finished with 67 points, almost equaling his rookie total despite having no offensive threat on his right side for most games.

If you’d like to try your own experiments with Bieber on your favorite (or least-favorite) team, he’s included as a free agent in the database in FHM4’s pre-holiday update.  FHM4 is available for the PC and Mac via OOTP Developments’ website (at www.ootpdevelopments.com/franchise-hockey-manager-home/), or on Steam (at store.steampowered.com/app/595420/).