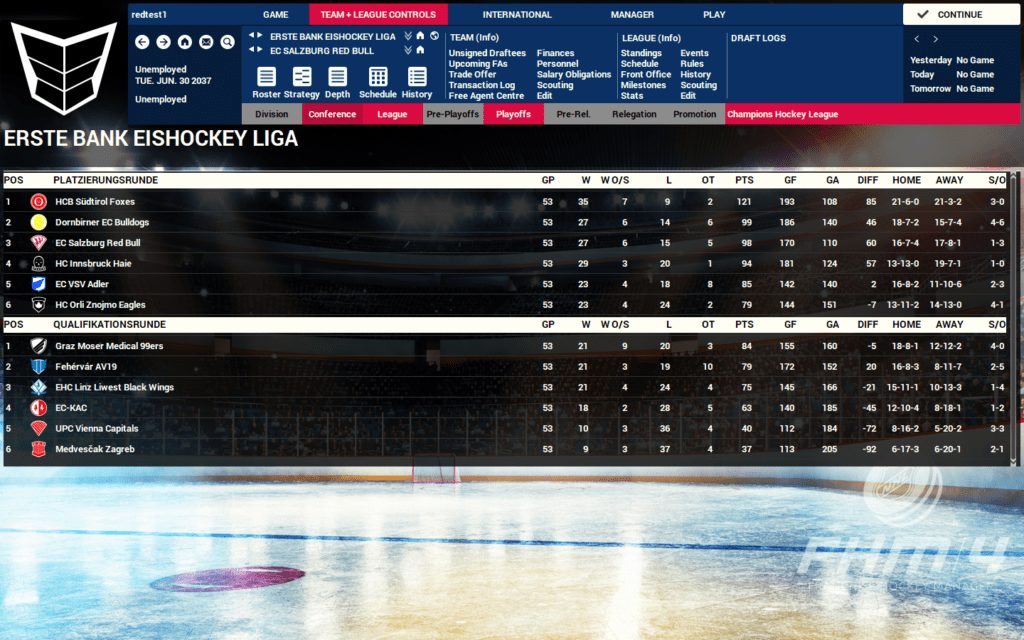 Franchise Hockey Manager 4, which is available for pre-order now, features a National Hockey League license, but fans of leagues outside North America have options too. FHM has always included leagues from across Europe, and this year’s game offers 4 new ones, as well as the Champions Hockey League, a multinational, multi-stage 32-team tournament with teams from 14 European leagues.

Erste Bank Eishockey Liga (Austria): Founded in 1923, this is the highest-level hockey league in Austria. The EBEL features 12 teams in Austria, Italy, Croatia, Hungary, and the Czech Republic, and it’s probably the strongest new league in FHM 4.

Red Bull Salzburg is the league’s three-time defending champion, although EC KAC is its version of the New York Yankees, with 30 championships won since 1934.

Belarussian Extraleague (Belarus): The BXL, as it’s known, has operated since 1992 and currently features 11 teams, all of them located in Belarus. HK Neman Grodno is the BXL’s defending champion — they’ve racked up six titles, one shy of Yunost Minsk. Outside Russia, the BXL is the strongest league in the ex-Soviet countries.

Metal Ligaen (Denmark): Previously known as Superisligaen or Eliteserien before Danish Metal bought the naming rights in 2014, Metal Ligaen has existed since 1954 and now has 11 clubs. Esbjerg Energy is the league’s two-time defending champions while the Herning Blue Fox are tops with 16 championships.

Metal Ligaen is known for producing an ever-increasing number of NHL players in recent years.

Polska Hokej Liga (Poland): This Polish league was known by two different names between 1927 and 2013, at which time it was reorganized and given its current moniker. It currently has 10 teams, with Cracovia its two-time defending champs. Counting the previous incarnations of the league, Podhale Nowy Targ tops the list of most championships with 19 of them.

Champions Hockey League: Founded in 2013, the CHL is a tournament featuring top teams from across Europe. This year’s incarnation will feature 32 teams from the best leagues, including the four leagues added to FHM 4. Frölunda HC of the Swedish Hockey League are the CHL’s two-time defending champs.