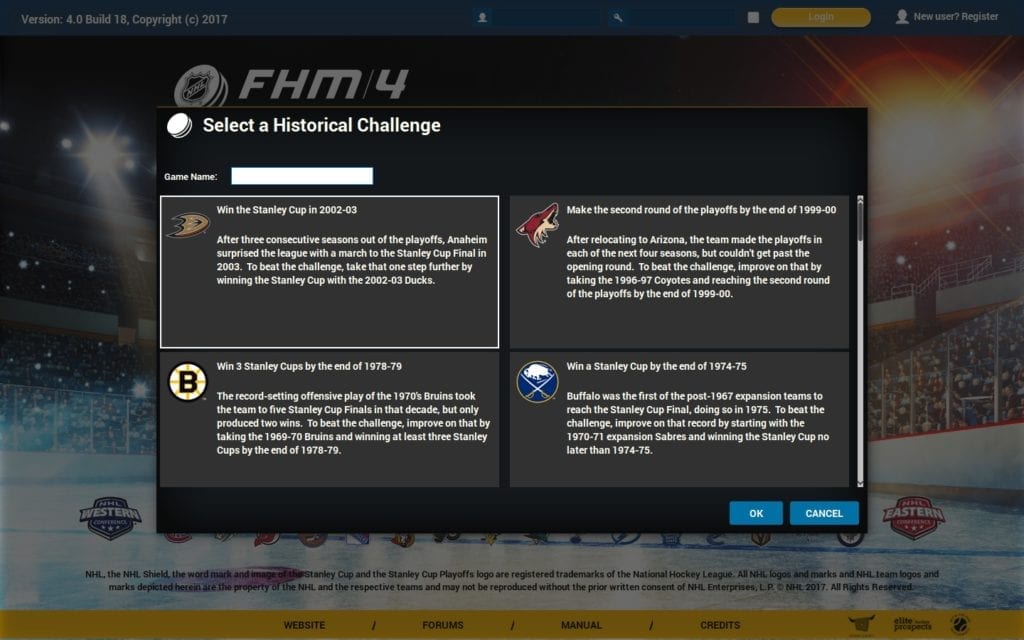 National Hockey League history is full of thrilling moments. Underdogs have overachieved in the playoffs and tasted glory. Teams have established dynasties that fans still talk about today. New clubs have made their mark much sooner than anyone could have expected.

Franchise Hockey Manager 4, which is available for pre-order now, offers a new Historical Challenges feature that lets you relive many of those events and see if you can meet or exceed what those teams achieved. They’re designed to be quick sims, with some of them requiring you to play just a season. After you succeed at the challenge, you can keep playing in historical mode and take the league all the way up to the current season, if you want.

Here are a few of the challenges you’ll find in this new mode:

Get past the first round of the playoffs in the desert

The Winnipeg Jets moved to Phoenix, Arizona in 1996 and changed their name to the Coyotes. The 1996-97 season was the first of four straight years that saw the newly-christened team make the playoffs but fail to get past the first round. Your challenge here is to reach the second round of the playoffs by the end of the 1999-00 season.

Soar into the playoffs with the Jets

The NHL returned to Winnipeg with a new Jets franchise for the 2011-12 season, when the expansion Atlanta Thrashers, which opened for business in 1999, headed north. However, the team’s playoff frustrations continued in the new city, so your challenge is to take over the Jets in 2011 and get into the playoffs no later than the 2013-14 season.

Capitalize on the big trade with the Los Angeles Kings

The biggest trade in NHL history made the Kings instant Stanley Cup contenders at the end of the 80s, but their fans would have to wait another quarter-century before their first championship.  To beat the challenge, take the 1988-89 Kings and get it right the first time around by winning the Stanley Cup that season.

Grab 3 Cups for the Motor City

This one is a longer play. The Detroit Red Wings, a storied franchise known as one of the “Original Six” NHL teams, only made the playoffs twice between the 1966-67 and 1982-83 seasons. They turned their fortunes around with playoff berths in 30 of the next 33 seasons and won four Stanley Cups in the process. Your challenge is to take over the 1983-84 team and win at least three Stanley Cups by the end of the 2001-02 campaign, equalling the real Wings’ accomplishment.

The Philadelphia Flyers entered the NHL in 1967 and became the first of that year’s group of expansion clubs to win a championship when they did so at the end of the 1974-75 season. Your challenge is to take over the new Flyers in 1967 and win the Stanley Cup no later than that 1975 season.

Ready to rewrite some history in FHM 4?