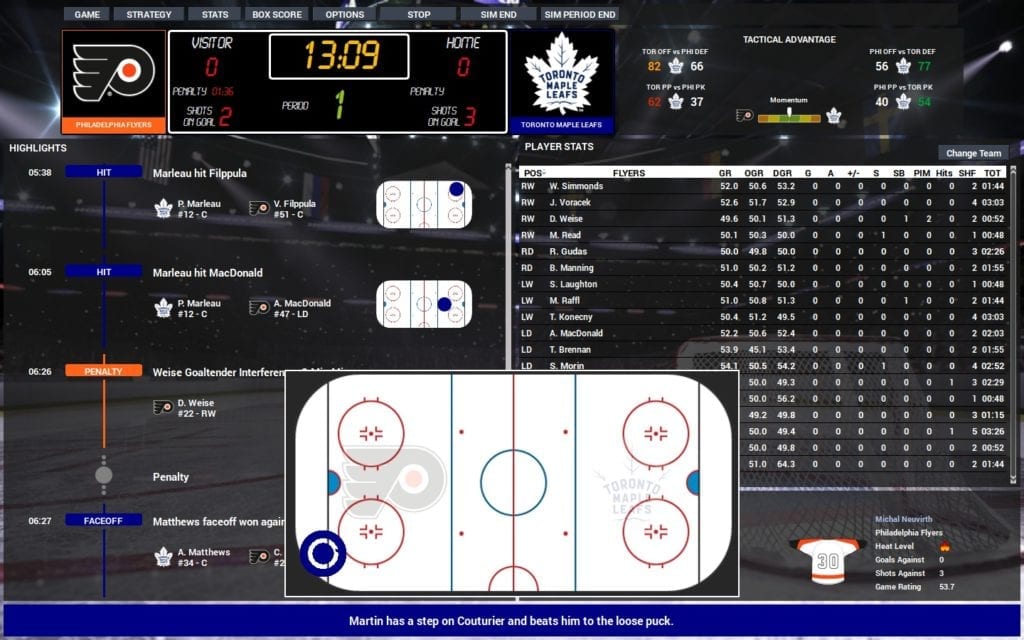 FHM 4 producer, Jeff Riddolls discusses the game’s new features this year and the team provides us with a bunch of new screenshots.

OOTP Developments has announced that Franchise Hockey Manager 4 is now available for pre-order, with everyone ordering copies receiving them on October 2, four days before its worldwide release. We sat down with FHM 4 producer Jeff Riddolls for a deeper dive into the game’s new features. Storylines add to the immersion

There’s plenty to get excited about in FHM 4, and Riddolls says that the new feature he’s “enjoying the most right now is the Storylines feature we imported from Out of the Park Baseball. That adds all sorts of unusual events to the game – from players getting involved in off-ice businesses to freak injuries at home. It’s a very flexible system and we’re just getting a feel for everything that can be done with it — I’m having to rein myself in a little because it’s easy to get carried away adding new things. We’ve got about 75 different storylines so far, with many having multiple branches, and we’ll keep adding more.

He adds: “At the moment, for example, I’m experimenting with a way to simulate the 1919 Spanish Flu epidemic that caused the cancellation of the Stanley Cup Final that year.  I can’t cancel the playoffs, but I think I can knock a bunch of players out of the lineup with the flu, as happened to Montreal that year. Or, since we used the OOTP stories as a starting point (after converting them to be a little more hockey-centric), we realized they’re a little thin on content relevant to European hockey, so I’m canvassing our researchers for ideas on stories that are unique to Europe — it’ll be possible, for example, for a Swiss player to get injured in the offseason while he’s doing his mandatory military service.”

Rewriting the past with Historical Challenges

The possibility of including the 1919 Spanish Flu outbreak in an historical storyline dovetails nicely with another new feature, Historical Challenges. Each team has an event from its past for you to meet or exceed, such as the 1950s Montreal Canadiens winning five Stanley Cup wins in a row. Riddolls explains: “It’s a way to play a quick game and achieve something in an hour or two of play, rather than having to commit to a long-term career. My personal favorite is replicating the run to Stanley Cup Final run of the 1981-82 Vancouver Canucks – not only do you have to get to the Final, but you have to complete the first half of the challenge first: finishing the regular season with a sub-.500 record, so you’re an underdog going into the playoffs.”

As part of the Historical Challenges work, historical play in FHM 4 has been expanded to 1917, the first year of the NHL’s existence. As with most sports, the NHL’s rules and managerial styles were different back then, so Riddolls notes that “we had to make some compromises to get the game’s engine to handle differences in rules and roster sizes, for example. But the essence of the era still shines through: a star player is even more important than in modern hockey, because he has to carry a bigger share of the ice time. And for most of that first decade, the NHL competed with the western professional leagues for players and championship credentials; that’s part of the game as well.”

We wondered if the research required to bring those early years to life in FHM 4 was daunting, but Riddolls says it wasn’t that difficult. He elaborates: “There’s actually been a small boom in scholarship about the early years of pro hockey; the best known book is probably former Canadian Prime Minister Stephen Harper’s A Great Game, about professional hockey in pre-Leafs Toronto.

“Morey Holzman and Joseph Nieforth’s Deceptions and Doublecross makes for a good follow-up to that, as it traces the machinations around the NHL’s first seasons. And Craig Bowlsby’s Empire of Ice is a very thorough history of early hockey on the West Coast. All of them were very useful in getting the 1917-1931 seasons added to the game.”

Roll the dice with the Vegas Golden Knights

If you’d rather write the modern day history of a brand new team, you can take control of the expansion Vegas Golden Knights in FHM 4. New clubs tend to experience their share of pain in the early seasons, and Riddolls acknowledges that “there aren’t many ways around having a rough time in 2017-18.” However, he adds, “you can get competitive in a hurry if you use all of your spare cap room going into 2018 free agency.” He continues: “I’ve seen the AI do that in test games and make it into the playoffs in 2018-19.  That’s not necessarily the best long-term plan, though — management will be very happy with you if you’re contending for a playoff spot that soon, but Vegas starts with a big pool of prospects and draft picks. If you’re already running close to the cap when all that youth evolves into guys looking for a second contract 3-5 years out from the start, your roster flexibility and upward mobility are going to suffer when you have to pare your payroll down to clear cap room for those new contracts.

“It’s probably more efficient to slowly build up, staggering the age ranges on your team, even if that means trading a few of the very young guys for slightly older players. That should get you into a healthier long-term salary structure that’s less boom-and-bust, because one bust is probably enough to cost your job.”

Riddolls adds: “And I should mention that you have the option of re-doing the expansion draft, allowing you to assemble your own Vegas team from the players exposed in the draft, if you prefer that approach to starting with the real Golden Knights lineup.”

If you’d rather oversee your new hockey world from the very top, you can use Commissioner Mode, which is now available in all types of games. Riddolls notes: “The restrictions present in last year’s Path to Glory system, which limited it in modern games, have been folded into Challenge Mode, which allows you to voluntarily accept some restrictions on your game. “But all the Path to Glory features, such as improving your own managerial and coaching ratings, are now available in every type of game now, and you have the option of turning Commissioner Mode on if you want to edit something before or during those games. We’ve also opened up a few new areas in the player records to editing.”

Like OOTP, FHM always offers plenty of additional features, and this year’s edition is no exception. Riddolls points out that many of them were added “in response to play requests.” He ticks off an incomplete list: