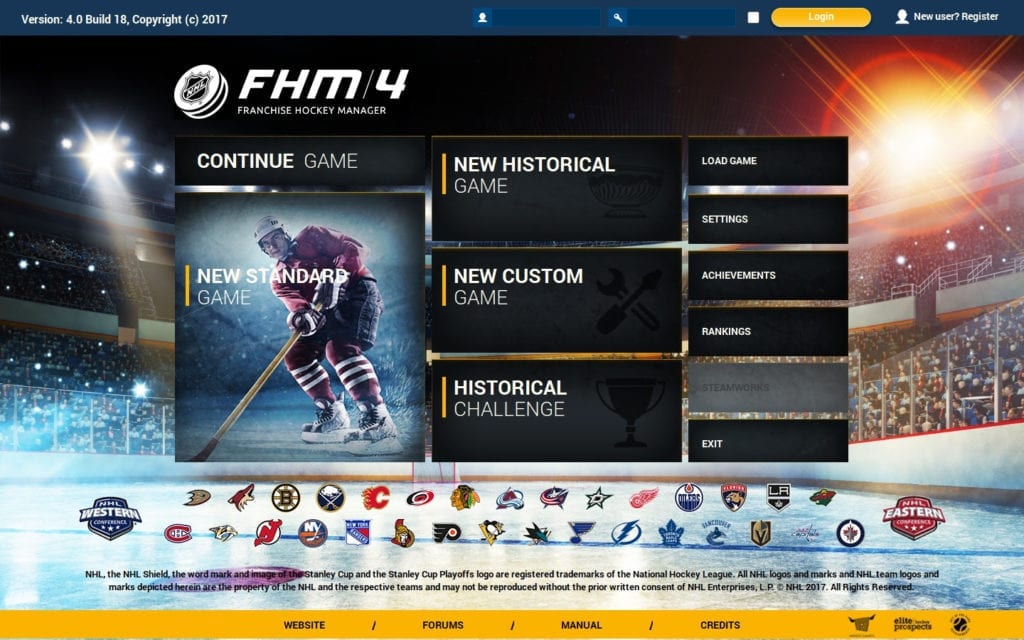 OOTP Developments has announced Franchise Hockey Manager 4, scheduled to arrive on October 6. If you pre-order, you can save 10% and get it 4 days earlier. Unfortunately, for Steam users, you will only get the 10% off, no early release.

The ONLY NHL®-licensed game for PC. Unprecedented realism, featuring NHL® logos, the Stanley Cup®, uniforms, and histories for all 31 teams.

FHM 4 offers over two dozen playable leagues for the 2017-18 season, including the National Hockey League®, minor leagues in North America, the Canadian major junior leagues, and leagues across multiple levels of European hockey. All included leagues feature real current rosters, based on countless hours of detailed research and work on player ratings.

Start as the new Vegas Golden Knights™ NHL® team with the option of re-drafting from the players who were actually made available in the expansion draft – returning all of those players are first returned to their original teams – OR accept their selections and move forward!

Flexible league structures and Playoffs systems! In addition to pre-set structures, choose the number of conferences/divisions in your league, its schedule length, and number of teams.

THE MOST HOCKEY EVER

Historical play extended back to 1917-18 with accurate rosters, including the early major leagues in Western Canada! An unlimited amount of history is at your fingertips.

Adding a new twist to our popular Path to Glory mode – which is now available in every aspect of FHM 4 – the new Challenge Mode will test your hockey smarts to the limit. Can you compete and win even if the odds are stacked against you? Pursue new achievements in a unique way!

It’s back! Available in all game types, set your own limitations or restrictions.

PLAYABLE LEAGUES AROUND THE WORLD

New playable leagues from Austria, Belarus, Denmark, Slovakia, Poland, among others, on top of returning favorites – plus a European Champions League – along with more international competitions than ever!

Every NHL® team has its unique history, and you can chase one of 30 new individual historical challenges, one for each team – try to repeat or better Montreal’s 1950’s dynasty, Philadelphia’s 1970’s expansion success, or Vancouver’s improbable 1982 run to the Final!