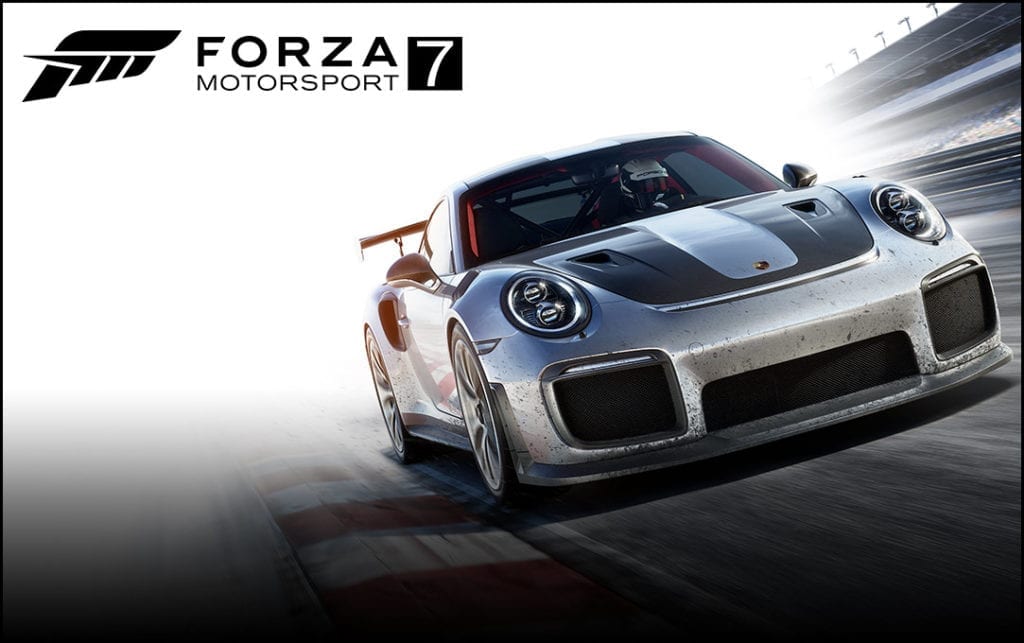 In a late summer and early fall lineup full of racing titles, Turn 10 enters the fray with their seventh installment of the Forza series. A series that was once considered the pinnacle of console racing, Forza has found itself confronted with much stiffer competition these days. The days of quality graphics and a lengthy list of cars is no longer enough to sit atop the racing genre, but has Turn 10 brought enough with this newest title to regain the throne?

Gameplay mechanics have always been a strong point in the Forza series (at least in my opinion) with solid driving mechanics and minimal learning curve. Forza 7 continues down that path, and while I wouldn’t say one will be able to master every class of vehicle quickly, you will be able to handle and control each car to an acceptable and enjoyable level in short order. The accessibility of this title is what should be appreciated, and while it would best be described as a sim-cade style, it allows users from all skill sets to sit down and just enjoy the title from the onset. From the start, the handling with the controller felt great, but if I can suggest just one thing early on, turn off/down most of the in-game assists that are offered. These assists, while helpful to newcomers, can really inhibit your enjoyment and learning curve advancement in the long run. While the feel and control of each car feels solid as you begin your journey through Forza 7, the AI is a different story. That’s not to say the AI is bad, it’s not, but it can best be described as erratic. Now if you’re a veteran of the series, then you fully understand the inconsistency of the AI that coincides with the beautiful graphics and gameplay that the Forza series provides, so this shouldn’t be a surprise. In no way would I deem the AI as a huge detriment, but the inconsistency does rear its head enough to be a small detraction. In the end though, the overall feel of the controls and handling offers a lot of fun, and can be tweaked if one does struggle with them.

On top of solid controls and handling, Forza 7 is simply a beautiful game to see in action. I tested both the Xbox One-S and PC version and played in true 4K. While the Windows 10 version in 4K could bring a tear to one’s eye, the Xbox One-S version was no slouch, and held up rather comparably to its PC counterpart. While Forza 7 may not be a genre-defining title in terms of gameplay, it is as solid as it’s ever been, and makes for a deep and enjoyable racing experience.

The one thing Forza players can always count on is a streamlined career mode, and this year’s title is no different. In the newest iteration, career mode offers up to six different divisions, with each one needing to be unlocked before you can progress to the next. Progression availability is based upon a point system, and the more points you garner, the quicker you can unlock the next division. Although there are only five individual divisions to unlock, there is plenty to do within each one. You have standard races, showcases, which unlock special cars and gear, and multiple classes or disciplines to help keep it fresh. As mentioned before, there are multiple options of discipline in each division, so thanks to the developer’s choices here, you are not forced into a certain racing genre, or type of car that is just not enjoyable. There is no doubt that career mode is purely a grind-type mentality, but it’s deep and enjoyable enough to keep one watching the hours fly by without a care. If you are new to the series, be prepared for a great experience. If you’re a veteran, it still offers a tremendous ride, albeit a familiar one.

Multiplayer in Forza is pretty straightforward, but please do not mistake that for boring or limited. If you have no preference, you can literally jump in and start racing against other users — great. Now if you’re looking for a specific style or model of car to race, you can filter that also. Basically the system is set up to help people find whatever style of racing they are looking for quickly, and that’s a great option to extend to users with specific wants and needs. On top of the filtering system, one can also simply create a lobby with the settings they desire, and let the public come to you. Even if you are not a fan of racing with the general public, Forza 7 also offers the ability to create a private lobby and include AI drivers — an absolute must for people who just want to have some fun with friends. Now, if you’re someone who desires something that is a bit more streamlined and structured, no worries, Turn 10 has the Forza League option for those who want some longevity to their online racing. The League option gives you an aggregate foundation to help keep track of those points and standings along the way. On top of all the online racing options that Forza offers, you can also view Forza TV, peruse uploaded in-game screenshots, or simply upload your own. No matter what your tastes or style, Forza pretty much as you covered with a bevy of options.

If you have played any of the previous Forza titles, then you pretty much have an understanding of what awaits you with Forza 7. Now, that’s not a knock on the series at all, but merely a reference to the consistency that Turn 10 has committed to, and delivered over the years. Forza 7 is an absolutely beautiful looking game with great handling, but the short track list and overall familiarity will have some feeling that the series may be getting a bit stale. For me though, I found that the developers have struck a perfect balance between arcade and simulation, and have delivered a title that is above else, a lot of fun to drive. If you are looking for an accessible title with a lot of depth, then Forza 7 will fill that void rather nicely. Forza knows what it is, and more importantly, doesn’t pretend to be something else. If that works for you, then this newest installment of the series should slide very comfortably into your rotation.