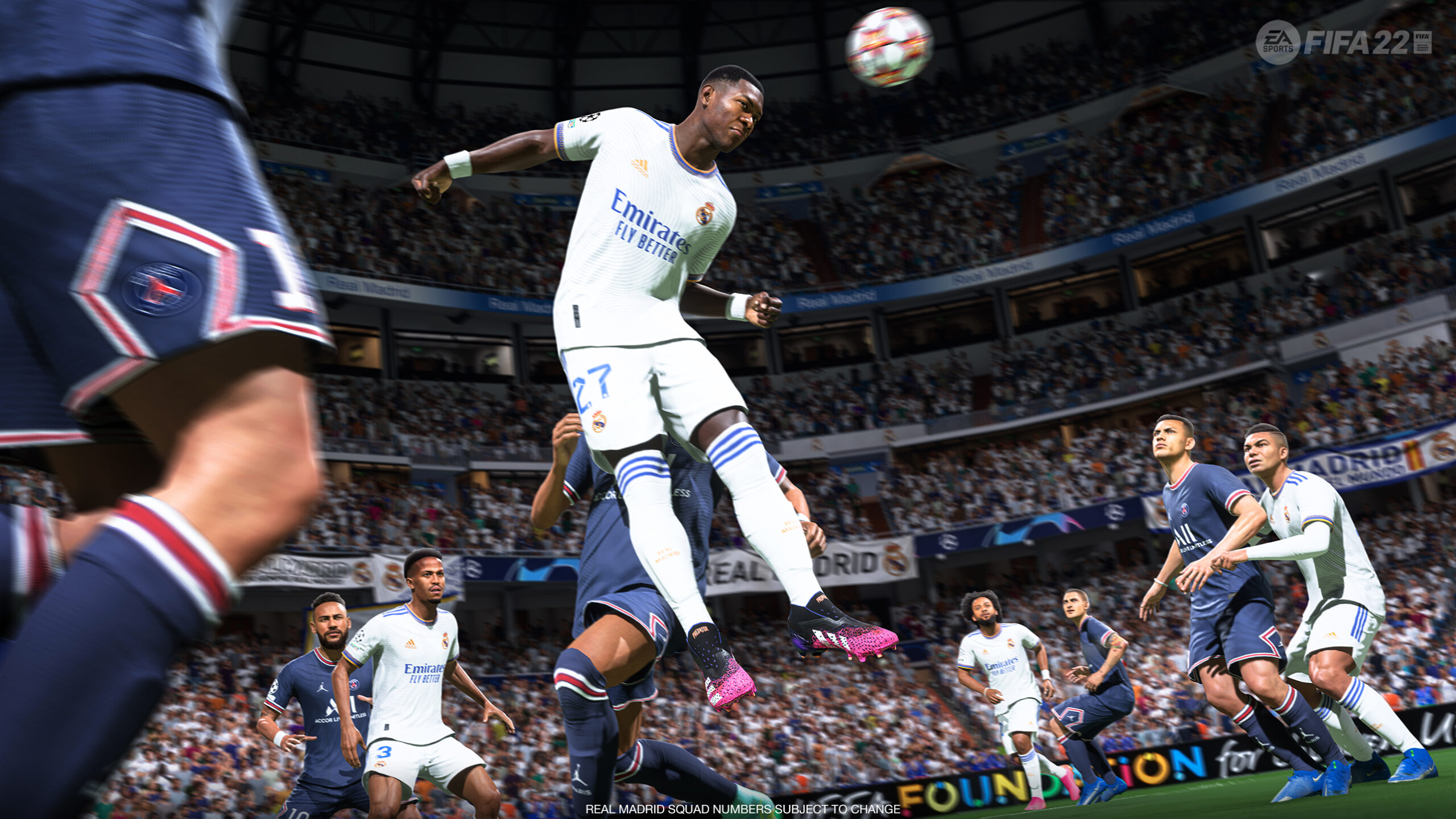 What a whirlwind it has been for us footy enthusiasts. Between the Copa America and Euro final we also got the official FIFA 22 reveal trailer, and I’m here to do a breakdown of that trailer and the other information we have so far.

What We Learned From The Trailer

As most trailers do these days, actual gameplay footage made way for chopped up cinematics that would make George Lucas proud. EA, true to its roots, offered us a brief glimpse of some of the technology behind FIFA by teasing the new “HyperMotion” technology. Taking a small page out of Madden‘s playbook, FIFA 22 looks to be powered by actual stats generated from real-world data capture devices. Cover athlete Kylian Mbappe and PSG brethren took to the pitch donning the latest in motion-capture technology showcasing some of the complex data algorithms that go into having a realistic football simulation.

While the proof will ultimately be in the pudding, it was cool seeing stars such as Captain America (Christian Pulisic) pull off a few moves that we’ll hopefully see replicated in FIFA 22. Apart from the cool cameos (shout out to Trent Arnold-Alexander and Marquinhos!) there wasn’t much to take from the trailer, which to be fair to EA, is standard for reveal trailers. They’re generally aimed at creating a buzz instead of providing us, the footy community, with massive amounts of information about what we’re in store for this fall. Instead, EA chose to drop a lot of new information via its website, which we’ll break down here shortly.

What is HyperMotion Technology?

EA’s latest and greatest catchphrase will be “Powered by Football” — and, hey, that sounds great but what does it actually mean? Well, for starters, it’s not a gameplay engine in the way Frostbite is, which will probably disappoint many, including myself. EA’s a massive developer, and like a lot of gaming companies the size of EA, the company tends to keep its engines proprietary and in-house. There’s been no indication from other EA offerings such as Battlefield of Madden to suggest that a new engine will be coming, so hearing about this HyperMotion Technology has many wondering what’s it all about.

It’s still early in the ’22 gaming cycle so more information will be out there soon, but the general consensus from around the community is that HyperMotion is a new technology that allows the game engine to generate realistic animations, which results in significant improvement in the simulation of ball control, player contact, and most of the off-ball animations.

Here is how EA describes the way HyperMotion tech works:

It sounds cool, but jumping back to the trailer is where we see these new Xsens suits in real-time as players like the aforementioned Christian Pulisic and Mbappe are rocking them. In my breakdown of what we could expect from the Unreal Engine as it relates to PES 2022, I talked briefly about some of the new motion-capture technology at the community’s disposal, and so it’s cool to see something similar in motion here.

If you’re familiar with some of the data capture clothing that often looks like a male sports bra, you’ll understand how these materials feed data back to a central location where they can be analyzed — only this time for the purposes of creating animations as opposed to sports science tied into player fitness. I’ve been largely critical of FIFA‘s animations in the past so anything that makes them more realistic is a welcomed addition.

Lastly, one can hope that by placing these Xsens suits on some of the bigger stars means that we’ll finally have some sort of player individuality, something that PES does well and FIFA has historically struggled with over the years. FIFA has all of the bells and whistles, but the last step is authentic gameplay. That starts at the grassroots level, namely the pitch. 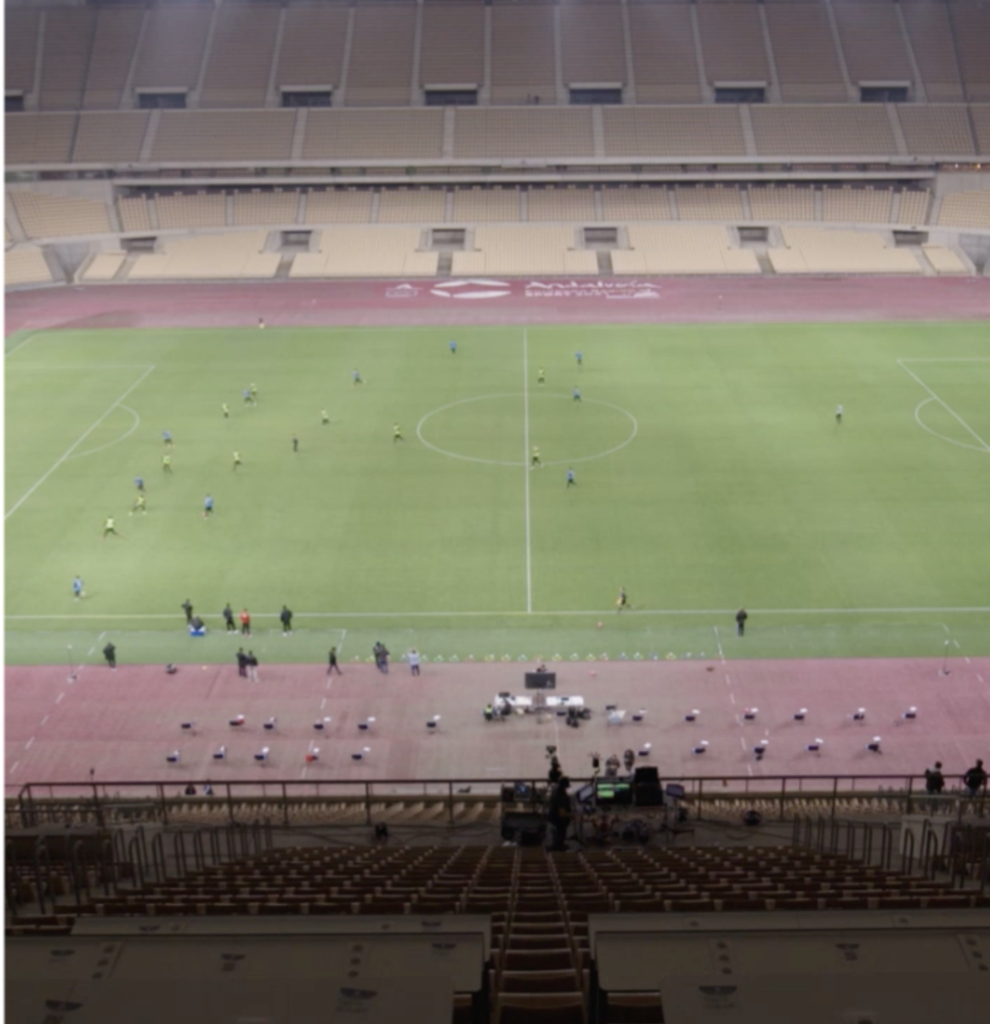 Feeding right into 11v11 Match Capture, we got our first glimpse of what appears to be an 11v11 training session where all of the participants are suited and booted! Finally, the days of green screens, mo-cap, and the like could be coming to an end, being ultimately replaced by data captures from actual matches. While green screens/mo-cap won’t fully fade away for some time, it’s nice to see the technology catch up with the ambition. Besides, realism isn’t just about the aesthetics like stadiums, tifos, and the like.

It’s also about professional players looking and playing like themselves, only in a video game format. EA will hopefully use its vast reach to tap into partner clubs across the globe. You just better have a custom suit for Ronaldo. He only wears the finest of clothes! 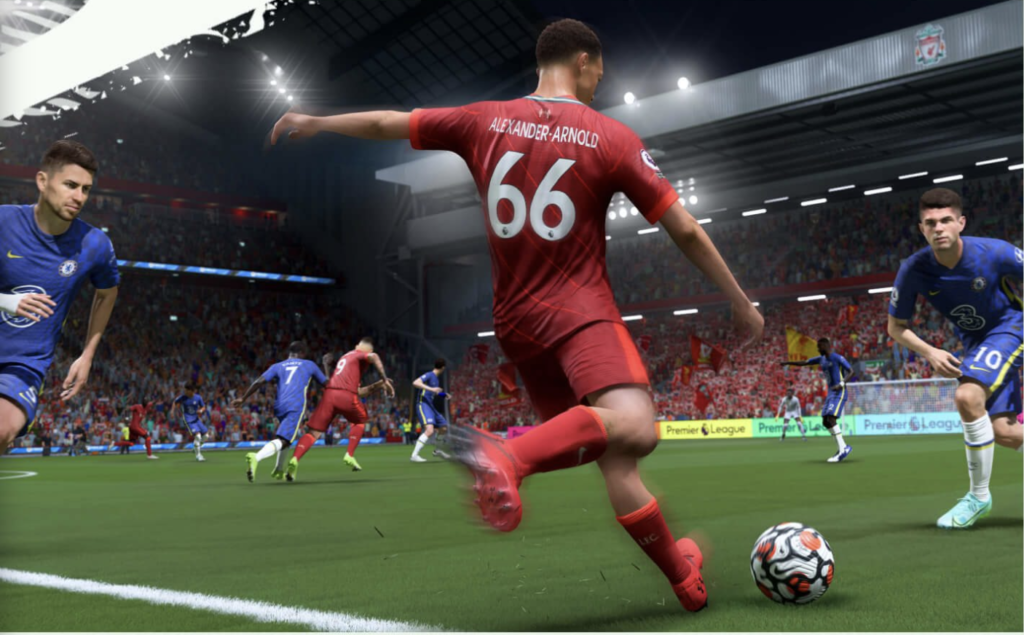 “Machine Learning” sounds familiar as we’ve heard similar catchphrases from EA in the past, but this time it could be different. As the tech evolves, things like graphics and audio are usually the first to get upgraded, but fans of FIFA — especially those of us here at OS — have been asking for one thing: “Better, Smarter AI.”

Pretty graphics and presentation packages are nice and definitely help with immersion, but you know what’s even better? Having the AI actually do stuff that resembles real footy. That’s what I want and expect from a football game in 2021. Here, EA lets us know that its new “cutting edge proprietary machine learning algorithm not only captures but learns from the data it captures to create organic football realism.” It all sounds good to me as I’m a huge fan of all things organic. Hopefully, EA delivers the goods like a well placed cross from Liverpool’s Trent Alexander-Arnold. 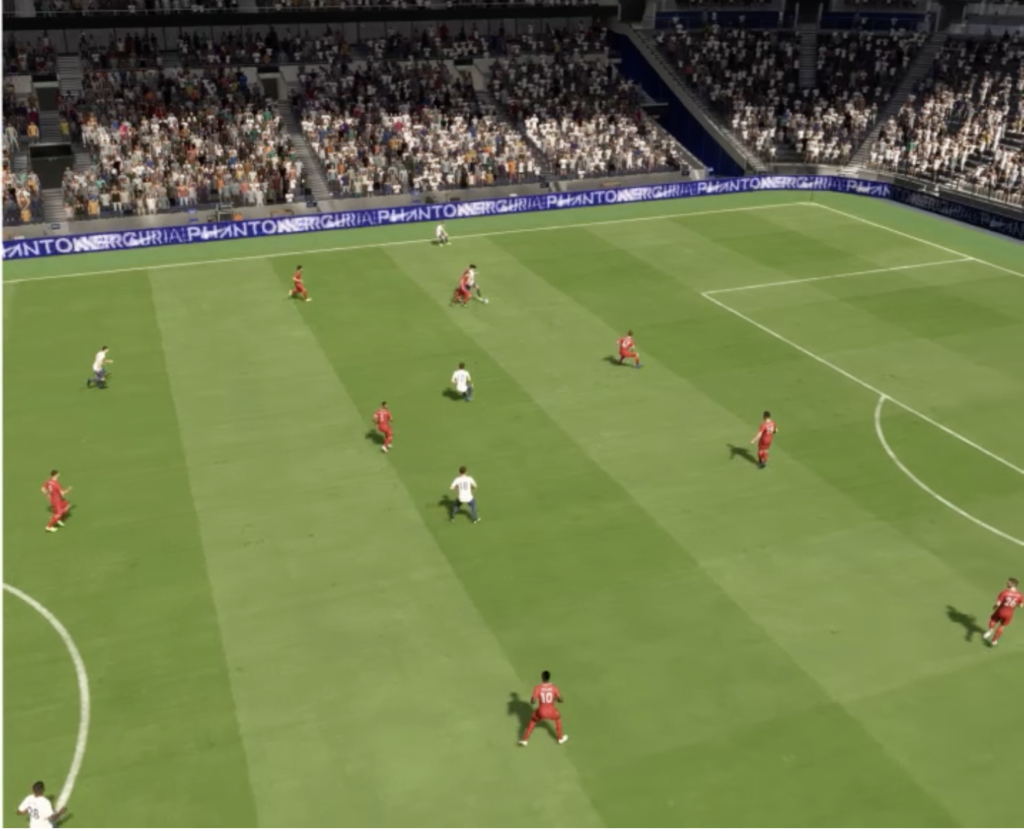 It’s all about authenticity in this reveal for EA, so it’s a no-brainer that the next logical step is centered around taking those individual moments and recreating them in a full 11v11 fashion. After all, soccer at the highest level is a team sport where usually the successful teams move and act like one organized unit, which at times with FIFA 21 was sorely misrepresented. EA does not offer much information on this new “Full Team Authentic Motion” but it did tease that it will add more intensity, responsiveness, and physicality to nearly every player in the game.

Last on this subject, and I’d be remiss to not mention it was the short GIF EA used to showcase this new feature. After FIFA 21′s lack of midfielders tracking runners on defense, the clip EA uses shows what looks like ex-Liverpool player Gini Wijnaldum shuffling back on defense in all too familiar a sight for FIFA fans. Instead of marking the closest Spurs player, he chooses to casually side step. I hope that’s resolved in the full game.

Full Team Authentic Motion naturally feeds into the next topic EA teased, “Tactical AI in Attack & Defense.” On the surface, this feature seems aimed at replicating the ebbs and flows of the beautiful game, both going forward and also defending. There’s been a lot of discussion since EA removed “2nd man pressure” as the default way to defend. This discussion has split the offline and online crowd in two, but I will always be of the belief that defending is done as a unit — with an emphasis on closing down the opposition when the situation calls for it.

Balance is what I’m after in defense and this sounds like music to my ears. However, a small bit of skepticism will always be there. Conversely, going forward more intelligence from your AI in recognizing where the space is, when and where to make runs, and more is what I expect when you combine these new features from EA. One interesting nugget EA put in here was:

Deeper player intelligence driven by the power of next-gen consoles…

Does this mean that these features will only exist on the new consoles? If so, and given the scarcity of the PS5 and Xbox Series X, I’d shed a tear for my brothers and sisters who haven’t secured one yet. Either way, EA will continue with dual entitlement for those who upgrade consoles mid-release.

EA really seems to be hitting on its new motion-capture tech as ML-Flow seems to bring the ability to create animations on the fly as players act upon in-game scenarios to create new animations, or possibly even break out of animations. FIFA 21 already contained a vast database of animations, but FIFA 22 seems to expand upon these ten-fold thanks to some new technology. 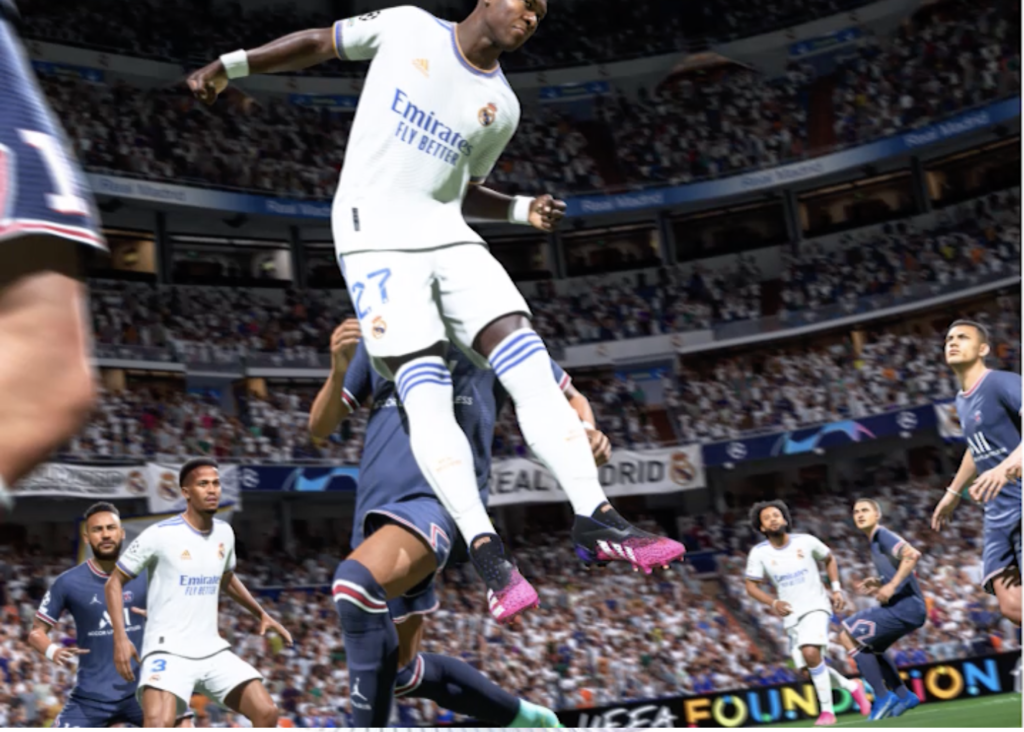 The aerial game has always left me feeling empty in FIFA. From the poor ball physics to the nerfed headers found in FIFA 21, the aerial game has needed a lot of attention. It appears that we might finally be getting it. With VAR all the rage, seeing and feeling the physical tussles from aerial duels should be better than ever if we are to believe EA. Yes, target men like Olivier Giroud aren’t as common as they used to be, but it would be nice to see some more physicality in FIFA 22, especially in Pro Clubs. 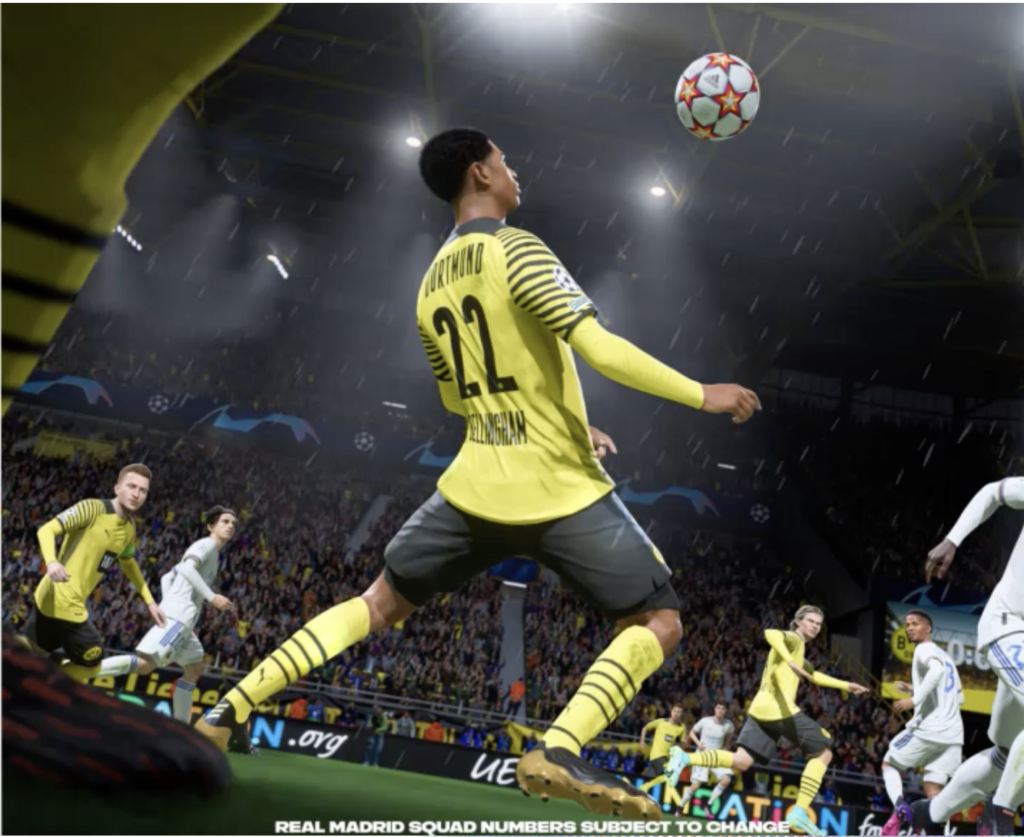 One of the small details I love about Konami’s PES are the varied first touches. While the degree of realism changes with Data Packs, there’s no doubting the impact it has on the game, and I for one am happy to see it make its way to FIFA. A good first touch is what often separates the pros from Joes, and with FIFA‘s already solid shielding game, being forced to pay attention to how you control the ball will hopefully slow the game down and get rid of some of the herky-jerky gameplay that plagues FIFA. 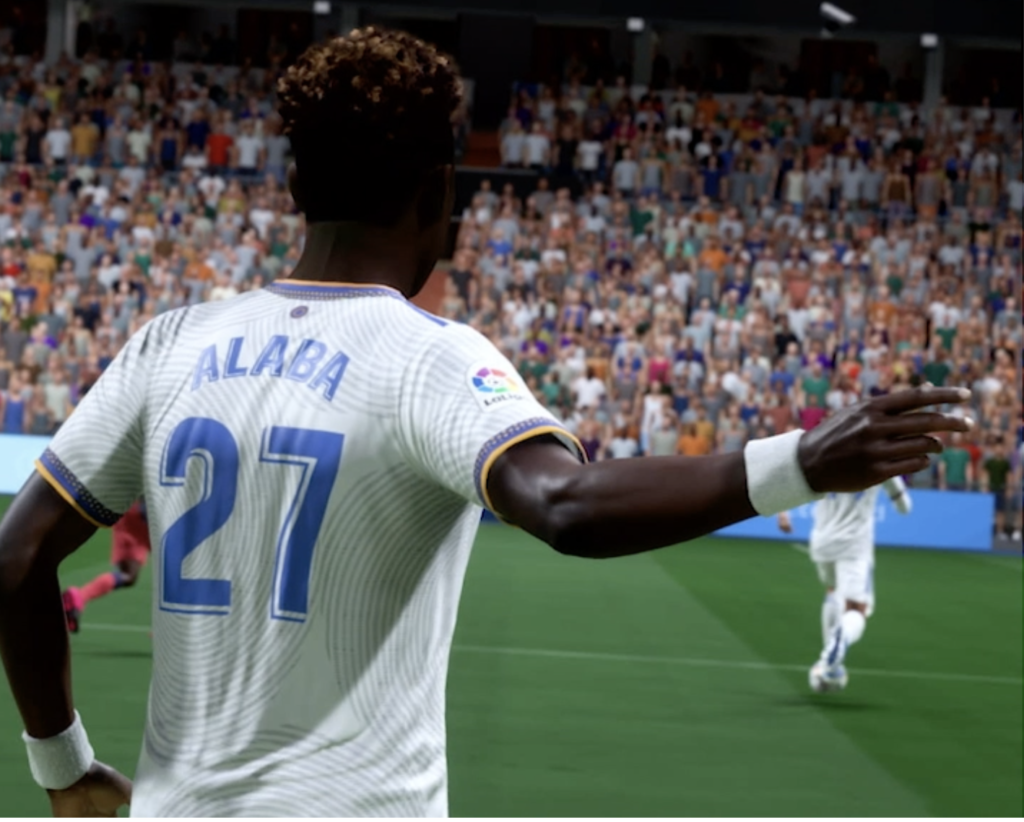 Every year one of my favorite threads on the NBA 2K forum is “The Little Things” thread. Yes, they’re mostly cosmetic and don’t have an impact on gameplay, but it’s the little things like player emotion that make the game look realistic and give players some personality. Sports are an emotional game, and FIFA has done a pretty poor job over the years to separate itself from robotic behavior. Anything that can bring more personality and life to the game is a bonus for me.

The real gems from this FIFA reveal came via its website, and if I’m being honest, those tidbits all sound good. The CGI trailer aside, it seems as if EA has taken some feedback provided by the community and really focused on the intelligence side of FIFA. Cosmetically, FIFA already is superb, especially on next-gen consoles. Player faces, stadium atmosphere, and more look, feel, and sound great. It’s the mental side that needs attention, and from the looks of things, we’re getting what we’ve asked for (on the whole).

Be sure to stay tuned to OS as more FIFA 22 information drops, and let us all come together and believe the midfielders will track back this year.

What feature has you most excited?