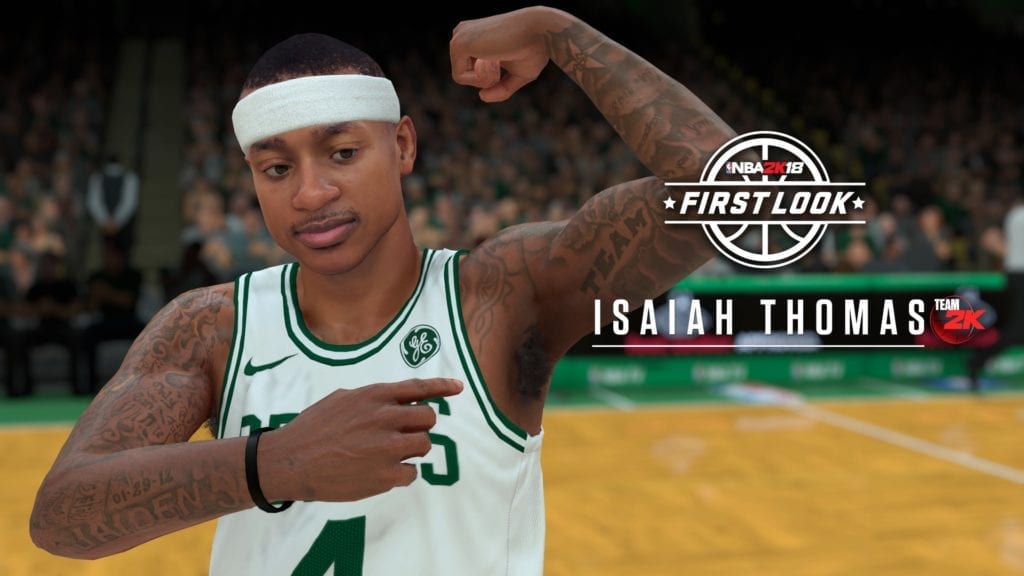 Just a year ago I was sitting in the same room at 2K hearing about all of the additions to NBA 2K17. Well it’s a year later, and the team at 2K Games and Visual Concepts have been busy working away on the much anticipated NBA 2K18.

Thursday was an event with an exclusive focus on exhibition gameplay — nothing more was available to choose from in this build — and it allowed a select group of NBA 2K’s top players (@DatBoyDimez @timelycook @MarioHTXX @DmanUnt2014), some members of the media (@mattbertz @UniqueMazique), and me a chance to sit down with the sticks and get a first impression on what gameplay tweaks we can expect to see in early September.

There were no big speeches, no big presentations; we were told to dive in and start playing.

What I noticed first was the responsiveness and fluidity of the players when I was playing defense. As a group, some of us felt defense was tougher to play, and others felt it was easier. After discussing, it seems a lot of these differences came from the actual player matchups. Kyle Lowry made playing defense seem much harder when going up against Russell Westbrook, yet you’d have an “easier” time when using Chris Paul — both are solid defenders, but Paul is all-NBA on that end and so it fits with the concept. A subtle, yet effective change.

And thus a theme for Thursday’s event was born. Subtle, yet effective.

I had a handful of development team members tell me that a focus had been placed on “feel” for NBA 2K18.  It wasn’t an official motto, and it wasn’t printed on a bunch of team-building t-shirts; it was just present within the team. The word feel plays very nicely with subtle, and it makes for some very effective improvements to gameplay, including:

(Disclaimer: I played numerous games, using different teams each time. I played on Superstar, All-Star, and Pro for different games, and sometimes even switched difficulties mid-game. Sometimes I played a sim-style following coach plays, while other times I just button mashed while failing miserably to multitask while talking to devs.)

So anyway, those improvements to gameplay I noticed:

If I’m starting a fast-break and there are two teammates in front of me — one about 5 feet away, and the other 15 – -when I hold the pass button for a little bit longer than I normally would for a pass, the pass will go to the player further away. I’m not entirely sure what would happen if I wanted to pass to the guy 5 feet away but with added velocity, and that’s what I want to make sure we’re clear on. Check the comments, or I’ll update this story later if I can get full clarity on that.

Overall, I actually enjoyed that I didn’t see anything too flashy in the demo time I had. I thought the subtle enhancements complemented what is already the industry measuring stick when it comes to sports gaming. I enjoyed that I felt a lot of NBA 2K familiarity, but could also really notice the polished coat it has received. Don’t take some of these subtle changes as a negative; it’s the complete opposite. It’s a cleaner, more fluid version of an already beautiful game.

And did I mention the game remains beautiful? You’ll have some visual surprises coming your way very soon, so stay tuned to Operation Sports for that. While there are still bigger features yet to be revealed (some the team seems very excited about), there was nothing outside of gameplay that can be shared beyond what has already been put out by the 2K team…but stay tuned!