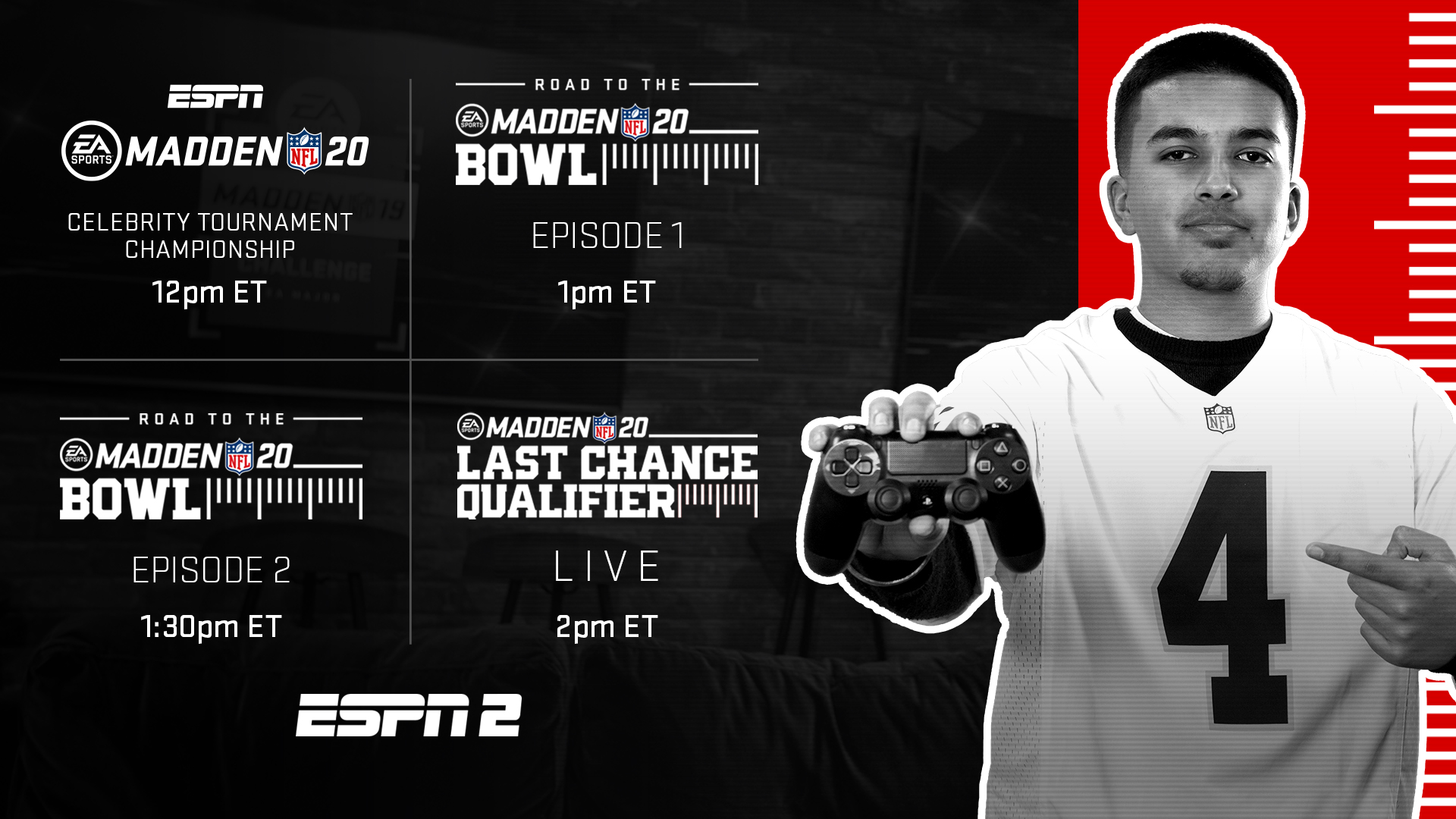 EA and ESPN have announced their new Madden NFL 20 Championship Series (MCS) programming, set to deliver more competitive action and entertainment straight to the homes of sports fans and gamers, following the excitement of the live 2020 NFL Draft.

To kick off the programing, ESPN2 will air the first two episodes of the “ROAD TO THE MADDEN BOWL,” bookended by the final match of the ESPN Madden NFL 20 Celebrity Tournament and the live Madden NFL 20 Last Chance Qualifier, bringing ESPN2’s Madden NFL airtime to a total of five consecutive hours this Sunday, April 26. All programming will be available for replay immediately after the ESPN2 airing within the ESPN App.

“At a time where live sports are paused, esports has stepped up as an incredible source of entertainment, inspiration and joy for fans across the world,” said Todd Sitrin, SVP and GM of the EA Competitive Gaming Division. “Through this exciting programming with ESPN, we can invite the broader sports community to be a part of the unique and authentic Madden esports competition, keeping gamers and traditional sports fans alike connected, while staying safe at home.”

Bringing new competitive action to fans is a part of EA’s “Stay Home. Play Together.” initiatives, which help the global community find more ways to connect through play, during a time where we need to be physically apart. The telecasts are also part of ESPN’s commitment to bringing the sports community together during this unprecedented time through its #oneteam initiative.

The ESPN Madden NFL 20 Celebrity Tournament features celebrities, athletes and musicians competing in Madden NFL 20 for bragging rights and a donation made in the winner’s name to Feeding America to assist with COVID-19 relief. Celebrity matches are already underway and can be watched on ESPN digital and social platforms each day this week at 12 p.m. ET.

The Madden NFL 20 Bowl, which closes out the Madden Championship Season, features the top 16 Madden NFL players in the world competing from home, #StayHomePlayTogether, for a $220,000 prize pool. Qualified competitors include Madden NFL Club Champions from the Cardinals, Packers, Jaguars, Eagles, Texans, Colts, Falcons and Browns along with this year’s belt winners, Serious Moe and Noah. Two additional competitors will advance from this weekend’s Last Chance Qualifier to round out the competitor field.

Play Madden NFL 20 Free Through the Weekend with Xbox Live Free Play Days or Purchase at 67% Off
Madden 20: xAPATHYx Xbox One Roster Updated Following First Round of NFL Draft