On Thursday, San Diego Studio began its annual Twitch streams aimed at providing insight and information on the new features and changes coming to this year’s iteration of MLB The Show. The two streams highlighted the defensive changes and hitting changes coming to MLB The Show 19, but it was really the hitting stream that highlighted the changes that will be occurring year over year.

Maybe the biggest change coming to MLB The Show 19 will be the onus on contact hitters having a bigger impact. The power meta that developed in MLB The Show 18 largely eliminated the desire to utilize contact hitters, so legends like Rod Carew and Kenny Lofton, as well as guys like Dee Gordon and Whit Merrifield, went largely underutilized. This year you should see a greater variation in hits.

The developers noted that contact hitters received a back-end power bump, thus encouraging more hard-hit shots into the gap and over the infield. It was emphasized that this was back-end tuning, and contact hitters didn’t specifically receive in-game power bumps. This shouldn’t increase a contact hitter’s home run numbers.

Another important piece of information to take away from the stream was users being rewarded for swinging at “good” pitches. Hanging breaking balls will have a much greater chance of being punished this year as developers found they were far too effective in MLB The Show 18. This should be a welcomed change for baseball purists wanting to destroy a floating meatball at the letters.

Furthermore, users will begin to be penalized in a sense for spamming the same pitch over and over. As an example, if you’re a player who likes to throw 80 percent changeups below the zone, the pitch will begin to miss more and more, and possibly make its way up in the zone as the game progresses. This applies to pitches that are not a pitcher’s primary pitch. Mixing things up and keeping the batter uneasy will matter more than ever this year.

Developers also noted that pitch speeds will be “faster than ever before in The Show.” This change will affect players on Hall of Fame and Legend difficulty the most. The pitch speeds for Rookie and Veteran were also brought down a little bit, thus widening the spectrum for beginners and some of the best players in the world. This is mode-dependent, so users playing Road to the Show will see different pitch speeds than that of head-to-head Diamond Dynasty players. 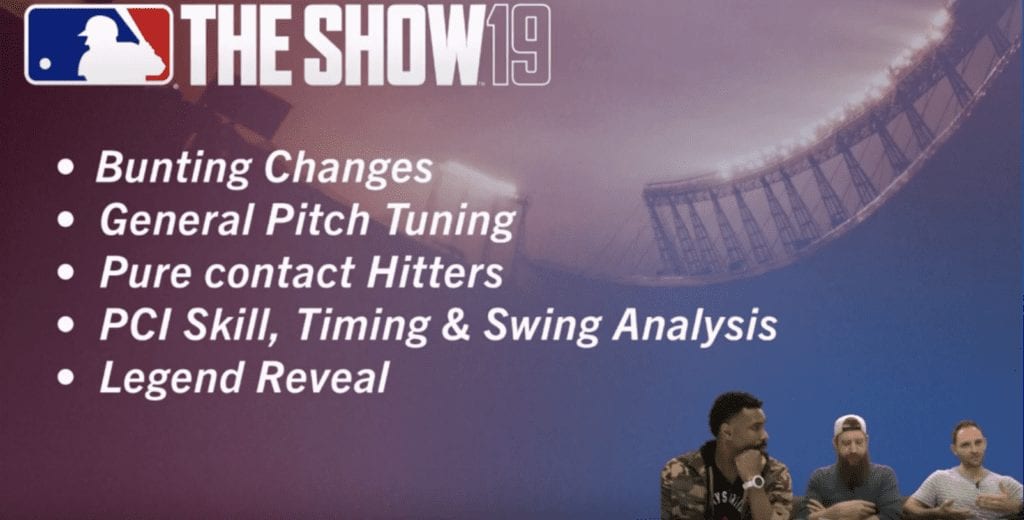 Bunting has also been addressed in MLB The Show 19. In general, users will see a greater success in bunting when “using bunting in correct situations.” They’ve also added a pre-pitch bunt direction mechanic that will allow a little more control in the placement of bunts.

Finally, power hitters can be countered to a certain degree this year with pitchers who have a strong HR/9 rating. While this will not totally destroy a player’s ability to hit a home run against the pitcher, it will help bring down the aforementioned power meta that had been built into MLB The Show 18.

A few final thoughts and changes coming to MLB The Show 19: