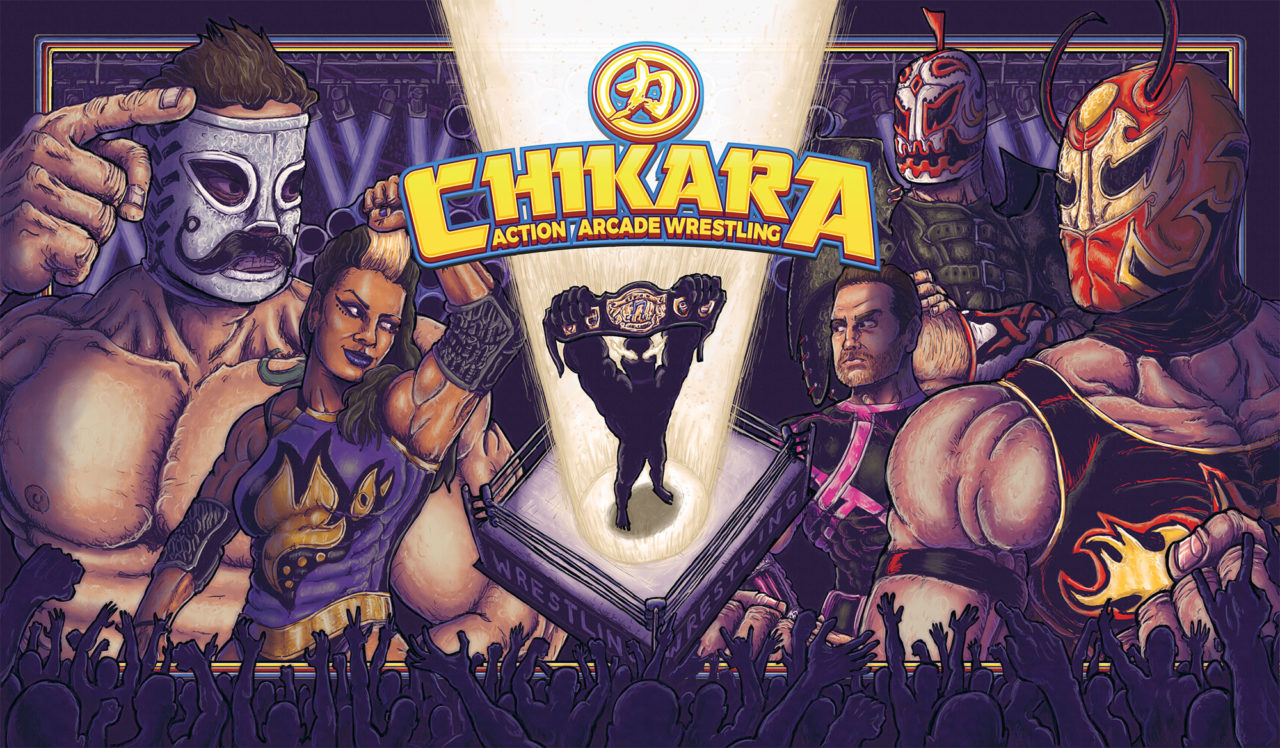 WWE 2K20 news have you feeling blue lately? While not a simulation, far from it, CHIKARA: Action Arcade Wrestling may have come out at just the right time to stoke interest from a disillusioned fan base. But if you’re unfamiliar with the promotion and you glance at the cover to spot a guy dressed as a fire ant (his name is Fire Ant by the way, and he is one of many), you might just wonder what kind of promotion you’re dealing with here.

CHIKARA, or sometimes CHIKARA Pro, is a professional wrestling promotion based in Pennsylvania and headed up by industry veteran Mike Quackenbush. Personally, it’s always made me think of what professional wrestling would look like if it were presented at a birthday party at a Chuck E Cheese, or possibly as “dinner and a show” entertainment.

While that description may sound all over the board, the truth is that it simply means the atmosphere is skewed to be more family-friendly and accessible to a wider audience. Most importantly, it just wants to be fun. 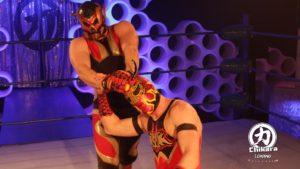 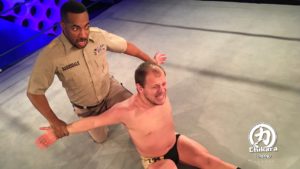 Which is why the arcade genre is exactly the path to go. It’s important to note also that this is by no means saying that CHIKARA’s talent is subpar, far from it. The likes of Trent Seven, Tyler Bate, Pete Dunne, the Young Bucks, Ruby Riott, Johnny Gargano and more have graced their ring.

Now, after nearly two decades of existence, CHIKARA finally has their first licensed video game. But how is it?

All of the wrapping paper under the Christmas tree doesn’t mean a thing until you can actually find out what’s in that box. Does the gameplay actually deliver? Not only is the answer yes, but I find it to be exactly what the professional video game landscape needed. With WWE 2K20 overhauling the controls and Fire Pro being notoriously steep on the learning curve, CHIKARA just wants you to pick up and play.

That’s not to say that there is no challenge to it, simply that the two-button system will allow for less time learning and more time competing. The two buttons are strike and grapple (which can be charged). Both strong and weak grapple open up a directional choice of which maneuver to perform, a system that should be familiar to most.

You can also press the two face buttons simultaneously in order to perform a strong strike, or run if you add in a joystick direction.

The other two face buttons are dedicated to either switching your focus to a different opponent or changing the person on your team that you control. Obviously with these two options only being applicable in multi-person matches, one-on-one affairs are decidedly simple, although the switch focus button can be used to get up early if needed (at a cost).

The ultimate point here is that anyone can play this game and be relatively decent at it. It strikes that ancient arcade cabinet balance of challenging enough to engross the dedicated, but simple enough to keep dropping quarters (or pressing start).

Going into this, I had not seen footage of the game since it was announced in 2016, so I was curious to see what actually going through a match would be like. One of the first things that caught me off guard was the “spot” system. 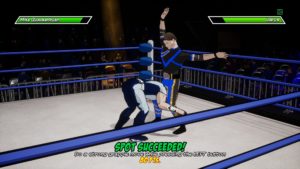 In case you’re unfamiliar, a “spot” in professional wrestling is a sequence or move that is called between the wrestlers, similar to choreography, and oftentimes performed on the fly during the match. Inherently, wrestling video games are not a complete simulation of what actually happens because you typically are not chatting with your opponent on what is going to happen next.

Well, an arcade-style game just challenged that notion. Rather than fully cooperating with your opponent, you are instead presented with spots to perform on the fly that will net points for the wrestler who can pull them off. If you don’t, there is no penalty, but I found myself gravitating to these moments, however random they were.

In addition, power-ups appear during the match that if picked up will grant various buffs such as not being able to be picked up or health regeneration. The match lengths themselves can be toggled between arcade and normal for a longer experience, and you can choose which weapons appear under the ring (including swords).

Finally, a nice touch is what happens after the match. You may press start or escape at any time to go back to the menu. Until then, feel free to beat on a helpless opponent while the bell rings every few seconds to try to stave you off. With the loser helpless, this is glorious salt in the wound.

Wrestling games really do have some of the most dedicated creators out there putting in hard work to share their craft with the rest of us. CHIKARA is no different and provides an entirely separate app called Wrestle Factory (named after the training center that launched CHIKARA). 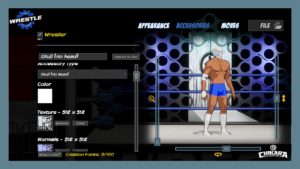 It’s not often that I’m sitting by myself and audibly speak something because I’m startled, but that’s exactly what happened when I opened the creations for the first time. The level of detail that is attainable for arenas, and especially for wrestlers, is absolutely astonishing and will allow you to bolster your roster in no time.

For an arcade-style game, this was an absolute labor of love. 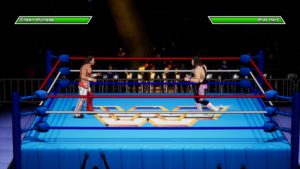 HBK vs. Bret Hart in a Hasbro WWF ring.

Like many arcade games, the question normally drifts to how long this game will actually keep your attention. With a heavy focus on exhibition matches, there is no career or season mode to speak of here. A sense of progression can be found by unlocking new items and wrestlers, but once that well dries up it’s tough to imagine just how long CHIKARA could hold one’s attention.

This serves as a reminder that while gameplay is king, how you frame that gameplay matters. The developer promises a stream of additional free content, at least some of which looks to be in the online mode, where one-on-one is currently available but three other slots are labeled as coming soon.

The gameplay mechanics I mentioned before that work really well for picking up and playing start to become a downright mess when playing with more than two wrestlers in the ring. Every match is a tornado tag (all competitors in, no tags), which on its own is not the issue. The problem is that the game’s 2-D playing field becomes a very awkward place to try and target on the fly.

I found myself constantly trying to line myself up correctly to be effective, only to frustratingly mess up my work by accidentally hitting one of the other two face buttons to either change my target or switch my character entirely. The 2-D format giveth, and the 2-D format taketh away.

This is especially noticeable in two-on-two matches because the ring’s dimensions are the same as one-on-one. For anything beyond four people in the ring, then the ring does expand to accommodate. However, the relief in having more space to work is immediately sullied by the fact that you now have more chances to not be lined up correctly with your opponent. 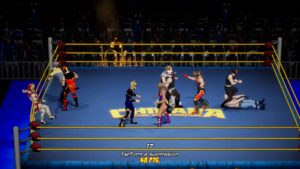 That aside, there was one huge thing I couldn’t shake while reviewing this game, and it actually goes back to the longevity of the title. CHIKARA’s biggest event of the year is also one of the most popular events in all of professional wrestling. Known as King of Trios, it is a three-on-three tag team tournament that has featured some of the biggest names in the industry in its over decade of existence.

Including the King of Trios competition would not only make sense, being as it’s essentially their WrestleMania, but it would also skyrocket the replay value because it gives you something to play for, something to chase. If implemented online, this could be a serious motivator.

I turned this game on with a clean slate. I didn’t know exactly where the development had landed on this, and I wanted to be washed over by whatever it was the game had to offer. At the end of the day, the most important factor in any game we play is whether or not it’s fun. Can you sit down alone, with friends or online and genuinely have a good time?

Yes, CHIKARA: Action Arcade Wrestling passes that test. But it also reveals fairly quickly that while it can sprint, it does not currently have the tools to run an endurance race.

Play an exhibition to marvel at the pick-up-and-go gameplay. Smile at the nods to WWF WrestleFest with the tap button prompts, or the pin animation straight from WrestleMania: The Arcade Game. Play another to enjoy the wonderfully absurd nature of throwing actual fire or shooting eye lasers at your opponent.

And then comes the realization that this dutiful throwback to wrestling arcade mashers past can only create a brief spark with its current offerings. Here’s hoping they find a way to light an eternal flame.