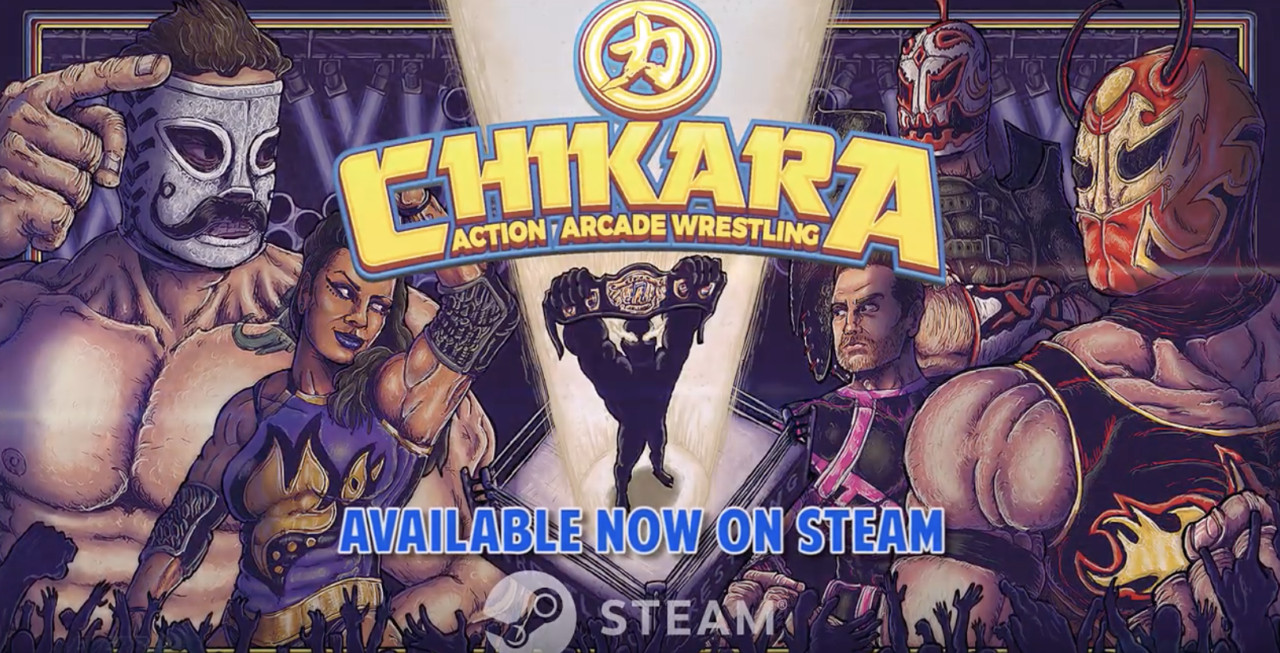 Independent developer VICO Game Studio, in partnership with Reverb Triple XP, and CHIKARA, the pro-wrestling innovator renowned for its family-friendly style that reaches millions of fans in 40+ countries, announced today that CHIKARA: Action Arcade Wrestling (CAAW) is now available on Steam for the promotional launch price of $13.49 (10% off S.R.P.)

Built on UE4, the first-ever official CHIKARA video game captures the excitement of the “Fun-Filled Lucha Super Party” with over-the-top antics, fast arcade gameplay, comic book characters, and the signature CHIKARA style. Can’t find a wrestler or arena that fits your style? Jump into the Wrestle Factory Creation Suite and check out the plethora of customization tools to unleash your creativity. With full game controller support, the powerful Wrestle Factory Creative Suite editor, and future content updates, get your body ready for the most electrifying wrestling game ever conceived.

“CHIKARA celebrates what is fun, exciting and dynamic about professional wrestling,” said Mike Quackenbush, founder and owner of CHIKARA. ”It’s a live-action comic book with the kinds of weird and wonderful characters and stories that idea promises. We’re the alternative to the cookie-cutter product of mainstream wrestling. To see that vision brought to life, in a video game that pays homage to the classic games I love to play, makes this all the sweeter.”

“I love the craziness, athleticism, and the pure fun of the CHIKARA brand,” said Dave Horn, executive producer for CHIKARA: Action Arcade Wrestling. “Eugene and I wanted to capture everything we loved from the fast-paced wrestling arcade games we grew up with – ease of controls, quick gameplay and absurd fun! We look forward to fans of wrestling and video games alike playing the game, and we can’t wait to see what players create in the Wrestle Factory!”

Welcome to the world of CHIKARA: Action Arcade Wrestling, a game that combines the quick action found in arcade wrestling games with the theatrical flair only found in the independent wrestling phenomenon, CHIKARA. Step through the ropes in this fast-paced, arcade wrestling extravaganza that’s easy to pick up and play with plenty of depth for the most seasoned wrestling gamer to keep coming back for more!

“CHIKARA: Action Arcade Wrestling is a game that appeals to all players, not just those who are fans of wrestling,” states Eugene Tchoukhrov, lead programmer and producer at VICO Game Studio. “Making the game easy to play and fun was one of the most important aspects in designing CAAW. And really, who doesn’t love to dress up in crazy, colorful costumes and perform insane wrestling moves on their friends?”