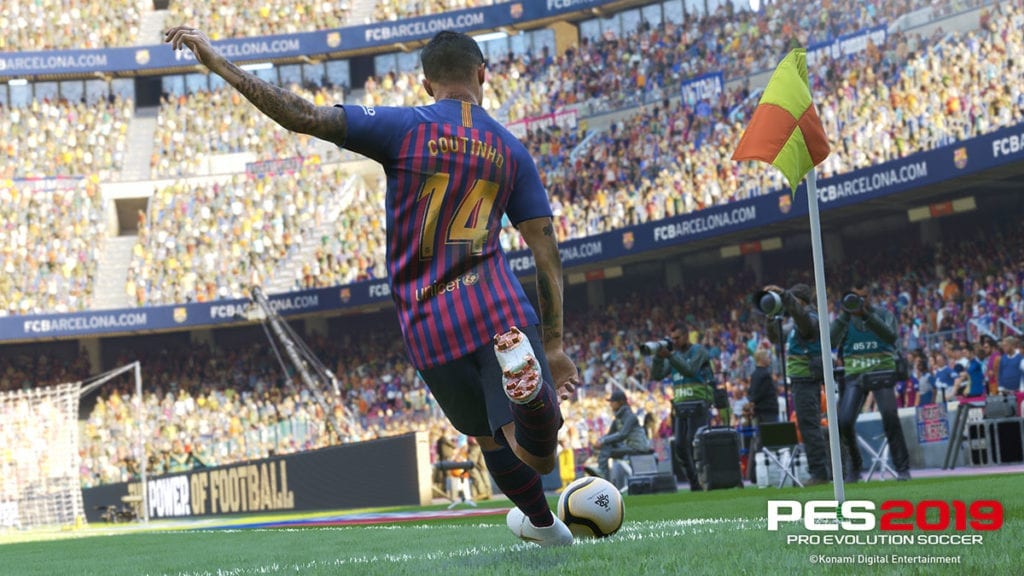 Once upon a time, Master League was the gold standard for footy franchise modes. Sadly, Master League has become an afterthought as MyClub, and in general, online gaming have taken over the gaming landscape. With that being said, let’s take a look at the recent PES Master League Reveal. 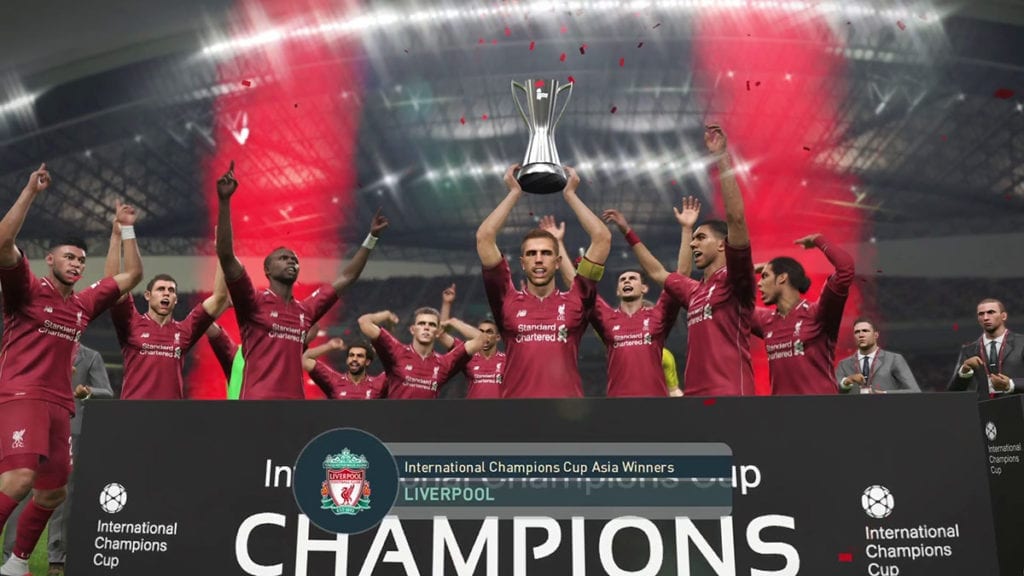 An important part of spreading soccer’s reach to the States, Konami has partnered with the International Champion’s Cup (ICC) to incorporate the preseason tournament in PES 2019. Following in FIFA’s footsteps, these preseason tournaments make up for a lack of a proper practice/training mode in which virtual managers could potentially spend valuable time incorporating new players, tinkering with formations/roles, and in-general getting a feel for your squad. Aimed at hitting the ground running once the real fixtures roll-in, it’s yet to be seen if these tournaments reap some sort of financial benefit. Lastly, the ICC is a fairly prestigious tournament with only top echelon clubs being extended an invite. Running a Master League with say, Queens Park Rangers would lose a little bit of authenticity if you’re selected to participate with the likes of Barcelona or Liverpool. 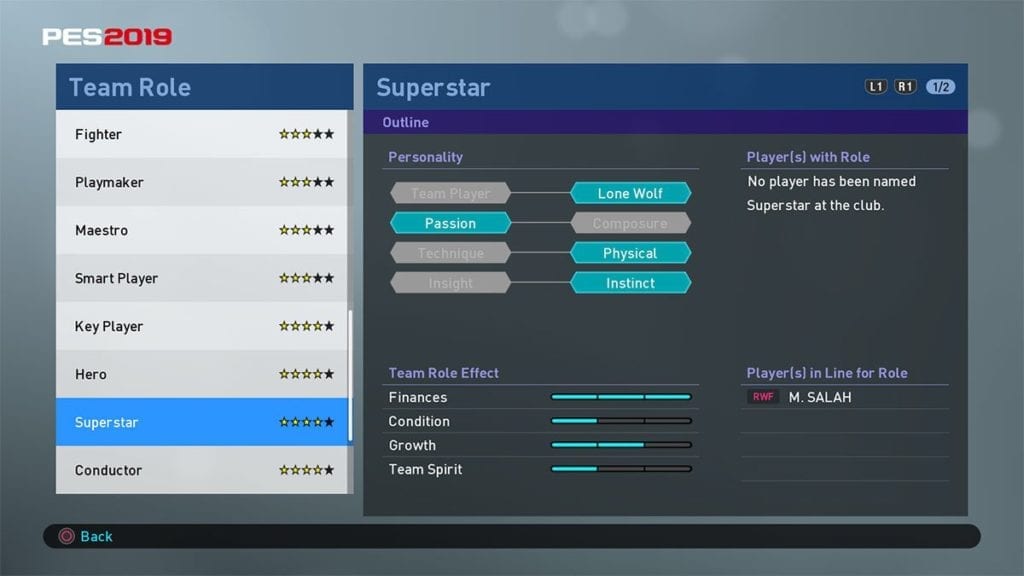 What To Be Cautious About

PES 2018, like many of its predecessors, suffered from an unrealistic transfer negotiation window. A good Master League can lose a bit of its luster when it becomes too easy to acquire unrealistic targets. Konami’s press release stated that the negotiation system has been improved, but it’s yet to be seen if the improvement enhances the actual negotiations. As mentioned, solely the addition of a clean-sheet bonus (a player performance bonus for keepers and possibly defenders if they keep the other team from scoring), and sell-on fee (if you sell a player and his new club sells him in the future, you would possibly get a percentage of the next sale) are detailed. It also appears that terms (contract related clauses — how long, salary/wages, performance bonuses, etc.) will be known at the start. This is a good thing that should get rid of the default three hours it takes once you start negotiating a transfer.

In attempt to break up the monotony of Master League, Konami has announced the addition of a “News Feed” for PES 2019. PES has traditionally used cutscenes to announce awards such as the Ballon D’or or when a new player signs with the club. Often monotonous and repetitive, these cutscenes are usually skipped through despite it being an attempt to get you more engaged. Personally, I would like to see more news feeds and/or videos from around your league, or for important competitions (think the UEFA Champions League or whatever it will be called next year). Too often in all career modes, we get thrown into a vacuum oblivious to the outside world and the new stories generated in them. Perhaps this new feature will help with this immersion, but my gut is telling me the implementation will be lacking, which is a shame especially when games like College Hoops 2K8 and NFL Football 2K5 — games that are over 10 years old — were able to incorporate better presentation elements.

Team Roles and Personalities look to have been tweaked to add a few options to select from this year. From the looks of the screenshots, these attributes impact the club’s finances (perhaps more shirts sold, which equals more revenue), individual player growth, condition (form), and team spirit. When combined with their team role (superstar, hero, etc.), there is the potential for a lot of overlap and possible confusion as to how it affects your club, especially with Team Chemistry being so vital to success within Master League.

Player Development has been hit or miss in PES. While the focused training points allow you to tailor your development based upon your team’s needs, the regeneration of retired players as well as always starting with the same youth club roster deeply sours the experience. PES 2019 boasts “11 new skill traits” but I don’t think the skill traits, or lack of them, were the issue. Proper development, tuned to training and/or playing time, is what makes or break development. For now, I will put this the “TBD” category. 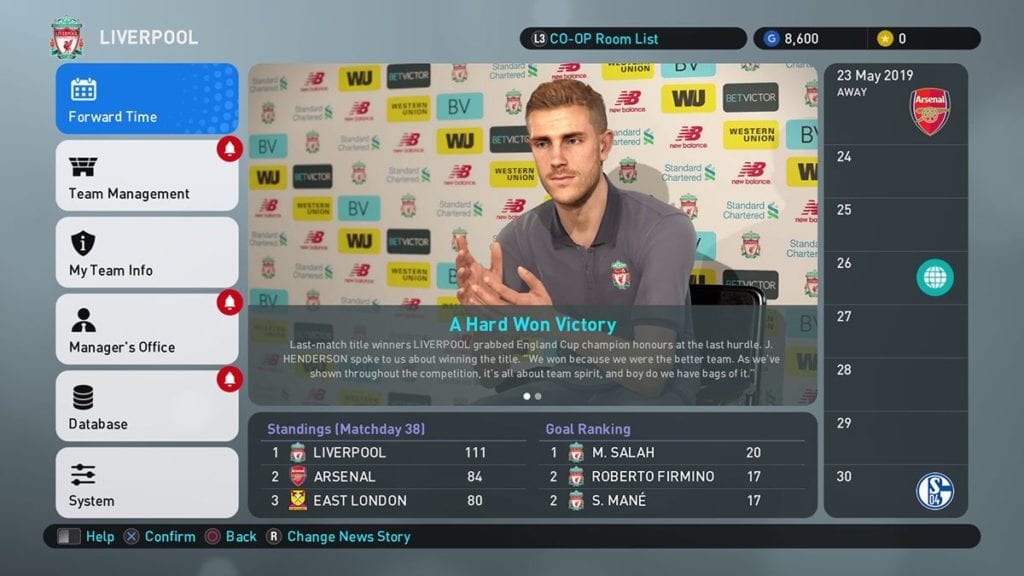 Once again, the user interface (UI) in Master League looks like it could use an update. The layout looks eerily similar to PES 2018 with the only real difference between the rounded-off tiles as opposed to last year’s more square look. Also, the Japanese-to-English translations are in dire need of an update. “Forward Time” sounds better as “Advance Time” just as “Standings” should be “League Table” and so on. From the news story entitled Hard Won Victory, one can see that all semblances of grammar were thrown out the door. Sure it might seem like nitpicking but it’s the little details that go a long way, and speak to Konami’s lack of addressing minor details.

In conclusion, this Master League reveal was rather disappointing. With most games seemingly ignoring the offline career mode experience, PES 2019’s additions align perfectly with this sad trend. Master League has needed a redo for quite some time now, and if this is any indication we’re going to be asking the same questions next year.