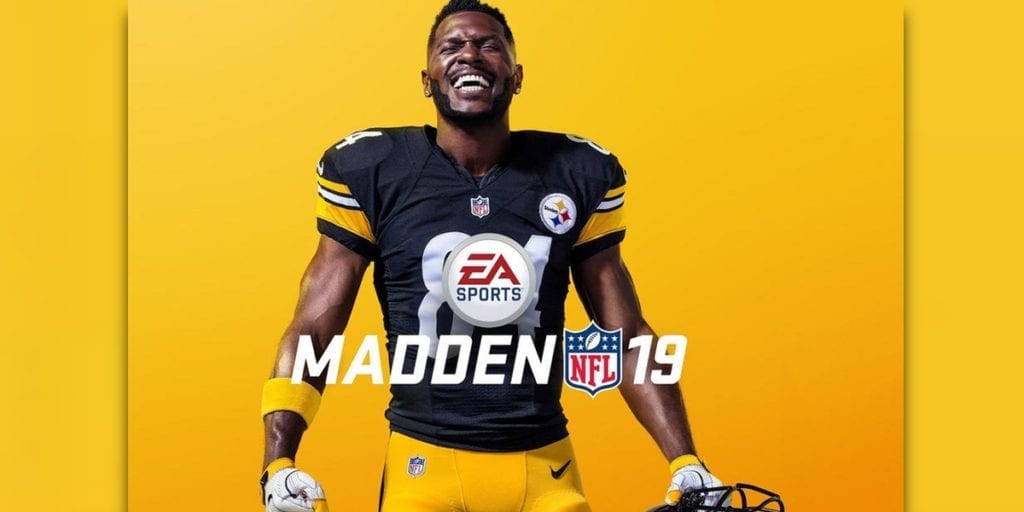 Today, EA finally made it official — with Antonio Brown being named the standard edition cover athlete for Madden NFL 19. Here’s the official PR and trailer.

Madden NFL 19 is set to push players onto the path of gridiron greatness with more precision and control than ever before worldwide on August 10th. Want to tackle the gridiron on the go? Rebuilt from the ground up to deliver a completely revamped football experience, Madden NFL Overdrive is the new update for mobile available August 15th, 2018 on iOS and Android.

“I am beyond honored to be on the cover of both Madden games,” said Brown. “There’s a lot of milestones athletes dream of, and after being inducted into the Madden 99 Club earlier this year, and now appearing on the cover of this year’s games, it’s clear that business is not just booming, but I’m also among the all-time greatest with these honors.”

Fans eager to control AB and other NFL stars will see the immediate benefits of Real Player Motion in Madden NFL 19. RPM technology will give fans even more control of in-game moves and immersive animations, making AB and other players’ move and act like their real-life counterparts as they charge through the game, showcasing their unique personalities, mannerisms, and of course, celebrations.

“AB has taken the league by storm the past few years and is arguably one of the best wide receivers to ever play in the NFL,” said Joshua Rabenovets, Sr. Brand Director at EA SPORTS. “His game is hot, he’s got a ton of personality on and off the field – he was an easy choice for the Madden NFL 19 cover.”

Fans can also look forward to the continuation of last year’s first-ever Madden NFL story-mode with the return of Longshot: Homecoming. Players will have more control over Devin Wade and Colt Cruise’s football quest with more NFL gameplay, more ways to impact the story, new storylines, and the ability to continue their Longshot journey within Franchise and Ultimate Team.

Madden NFL 19 is developed in Orlando, Florida by EA Tiburon and will be available worldwide on August 10 for Xbox One: The Complete All-in-One Games and Entertainment System from Microsoft and the PlayStation®4 computer entertainment system, and Origin for PC. For more information on EA SPORTS Madden NFL visit www.easports.com/Madden-NFL. Join the EA SPORTS Madden NFL conversation on Twitter and Facebook.

Rebuilt from the ground up, Madden NFL Overdrive immerses you in the action like never before. Choose your Captain and Coach, build an All-Pro team, and battle your rival in real time Player vs Player (PVP). The Madden NFL Overdrive update is available August 15th on iOS and Android. For more information visit https://www.ea.com/games/madden/madden-nfl-overdrive.