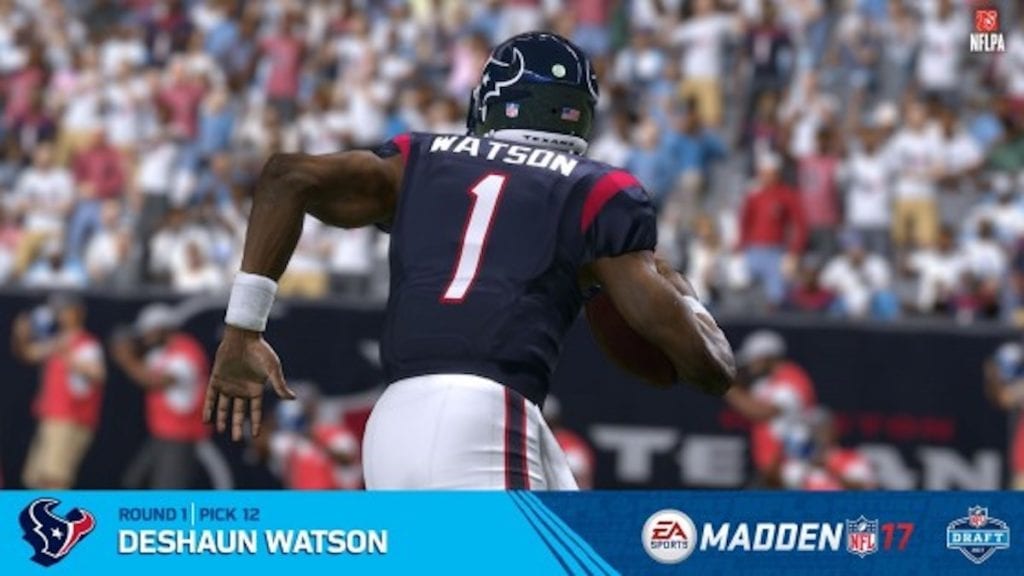 The NFL Draft was a little over a week ago, and the future of all 32 NFL franchises has changed drastically. Whether your favorite team drafted their quarterback of the future, or a pass-rushing defensive lineman, the roster will be significantly different than in last year’s Madden. Here is a look at each team’s key additions, and the role they will play in Madden 18.

A draft-day trade with the Chiefs netted the Bills a king’s ransom. In that trade, Buffalo acquired a first in next year’s draft, in addition to the 29th overall pick in 2016. Buffalo selected Tre’Davious White, greatly improving their defense with one of the top corners in this year’s class. Speedster Zay Jones gives Tyrod Taylor another option on offense, and an insurance policy if Sammy Watkins leaves after the 2017 season. Pittsburgh quarterback Nathan Peterman has the intangibles to start someday in the NFL, but his tools will need to be refined before he’s able to do so.

The Dolphins landed Missouri defensive end Charles Harris, one of the best 4-3 pass rushers in this year’s draft. He possesses a lethal spin move, which should be rated highly in this year’s Madden. In addition to Harris, Miami greatly improved other areas of weakness on their defense. Raekwon McMillan is a rangy, sideline-to-sideline linebacker and should immediately start alongside Kiko Alonso and Lawrence Timmons. Cordrea Tankersley will help improve a secondary that made significant strides in 2016. He has the potential to be a shutdown corner in the NFL. On the offensive line, Miami desperately needed to improve at guard, and Isaac Asiata should immediately start on the left side next to Laremy Tunsil. This should help virtual Jay Ajayi feast in Madden 18.

How a talent like Derek Rivers fell into New England’s lap in the third round is still unknown. He’s one of the best pass rushers in this year’s draft and will fit perfectly under Belichick in New England. Rivers has a knack for rushing the passer and should be an intricate part of the Patriots’ defense in this year’s game. Antonio Garcia and Conor McDermott will help protect the 40-year-old Super Bowl MVP, while Deatrich Wise will help an already stellar defensive unit. The rich just keep getting richer, and will likely be the top-ranked team in this year’s game.

The Jets didn’t draft a quarterback in this year’s draft, which could spell the beginning of the Christian Hackenberg era in New York. Adding wide receiver ArDarius Stewart and tight end Jordan Leggett, give the second-year quarterback some potent weapons. However, the verdict is still out on whether or not he can accurately find those targets. On defense, the Jets landed two of the top safeties in this year’s draft, Jamal Adams and Marcus Maye. Adams is a playmaker that should be one of the highest-rated rookies in this year’s game. Alongside Maye, the Jets’ secondary should be greatly improved. This will make their defense very stingy in Madden 18.

On paper, this is one of the better drafts around the league. Marlon Humphrey is a shutdown corner and should pay dividends for Baltimore’s defense. Tyus Bowser is a menace off the edge, while Chris Wormley can play both inside and outside on the defensive line. Tim Williams is another nice addition, and the three together should cause nightmares for opposing quarterbacks. Baltimore needed to get better on defense and that’s exactly what they did in this year’s draft.

Cincinnati went into the draft looking to improve the offensive weapons around Andy Dalton. In doing so, the Bengals drafted John Ross, the speed demon from Washington University. Ross’ speed will force opponents to game plan for his explosiveness, and make life easier for A.J. Green on the outside. Ross’ speed should be maxed out in Madden, which makes him one of the most dynamic players in this year’s game. Joe Mixon might end up being the draft’s best running back and should be a wrecking ball behind Cincinnati’s offensive line — thankfully for Bengals’ fans, off the field issues don’t have any effect on ratings. The Bengals also drafted two pass rushers, Jordan Willis and Carl Lawson, both will definitely be a factor in Madden 18.

Cleveland had one of the best drafts in the league, landing the best player in this year’s class in Myles Garrett. Garrett should begin his Madden career as a mid-80 overall, and immediately help a Brown’s defense severely lacking playmakers. Garrett is one of the best defensive prospects to come out in years. The Browns also drafted versatile safety Jabrill Peppers. Peppers will play safety, but has the versatility to play linebacker and nickel cornerback if necessary. He’s also a threat in the return game. Caleb Brantley will help improve Cleveland’s run defense and add another pass rusher to their defensive line. David Njoku is a play-making tight end who will be catching virtual touchdowns from big-armed quarterback DeShone Kizer sooner than later. Cleveland will be a fun team to use in this year’s Madden.

T.J. Watt is a versatile pass rusher who will help the Steelers in both the pass and run game. His skill set is eerily similar to his brothers, who remains one of the best defensive players in the NFL. Pittsburgh also added a few playmakers on offense, including the big-bodied wide receiver from USC, JuJu Smith-Schuster. Schuster gives the Steelers’ offense a reliable weapon and should open things up for Antonio Brown. James Conner is a mean running back who will be the thunder to Le’Veon Bell’s lightning. Pittsburgh will be much improved in next year’s installment.

The Texans traded up for Deshaun Watson, who possesses a rare combination of talent. Watson should be fun to use in Madden, and his big arm and mobility should breathe new life into the Texans. D’Onta Foreman adds another offensive weapon, and will complement Lamar Miller nicely. Zach Cunningham is a three-down linebacker and will be a perfect fit in Houston. The future looks promising in Houston and users should enjoy trying to right the ship in Connected Franchise.

The Colts drafted Malik Hooker with the 15th pick. Hooker is a play-making safety who will immediately improve Indianapolis’ secondary. Quincy Wilson fell into the Colts’ lap in the second round and has the skills to be a shutdown corner in the NFL. His coverage skills, coupled with Hooker’s sideline-to-sideline ability, mean Indy’s secondary should be tough to throw against.

The Jags landed arguably the best running back prospect since Adrian Peterson, landing Leonard Fournette with the fourth pick. Fournette is a rare breed of speed and power, and should have a deadly truck stick in this year’s installment. Top tackle prospect Cam Robinson fell to the second round, and gives the Jags much needed help on the offensive line. He will look to open holes for Fournette and protect Blake Bortles in the process. Dawuane Smoot and Blair Brown will help keep opposing quarterbacks in check. Jacksonville should be a fun team in Madden 18.

The Titans had a plethora of draft picks and made each one of them count. First, Tennessee drafted speedy wide receiver Corey Davis, giving Marcus Mariota a legit deep threat to open the offense up. Jonnu Smith is a big-bodied tight end who could cause matchup nightmares down the middle of the field. Second-round pick Adoree’ Jackson has the skills to be a shutdown corner.

The Broncos and John Elway helped sure up their sub-par offensive line with their first-round selection of offensive tackle Garrett Bolles. Bolles will help protect whatever quarterback starts for the Broncos, and open up running lanes for newly acquired Jamaal Charles in addition to C.J. Anderson. Tight end Jake Butt might’ve been the draft’s best tight end if an injury didn’t set him back. Lastly, Mr. Irrelevant Chad Kelly has the intangibles to be a starting quarterback and could be fun to use in Madden.

The Chiefs moved up to select their quarterback of the future, and Patrick Mahomes possesses the skills to be the draft’s best quarterback. His big arm and elite mobility will make him fun to play with in all Madden formats. Kareem Hunt is a shifty running back and should fill in nicely in Jamaal Charles’ absence. Tanoh Kpassagnon is a massive defensive end who can get to the quarterback. The Chiefs are on the up and up in 2018.

I believe the Chargers had the best draft in the NFL, landing two of the draft’s best guards in Forrest Lamp and Dan Feeney. Both players will start immediately on LA’s offensive line, and will help protect Rivers while opening holes for Pro Bowl running back Melvin Gordon. Wide Receiver Mike Williams will give the Chargers another option on offense and should be a matchup nightmare opposite of Keenan Allen. Williams is a big-bodied wide receiver who can create separation with ease. Look for him to be a dynamic receiver in this year’s Madden.

The Raiders desperately needed to improve their secondary, and landing a shutdown cornerback like Gareon Conley is a step in the right direction. His skill set bodes well for Oakland, and mixed with play-making safety Obi Melifonwu, Oakland will have one of the stingiest secondaries in Madden. Eddie Vanderdoes is a big body who will help improve the run game immensely. Jack Del Rio’s defense will be scary good in this year’s game.

The Five Rookies from the First Round Who Will Change Madden The Most
How the 2017 NFL Draft Changes Each Team in Madden: NFC