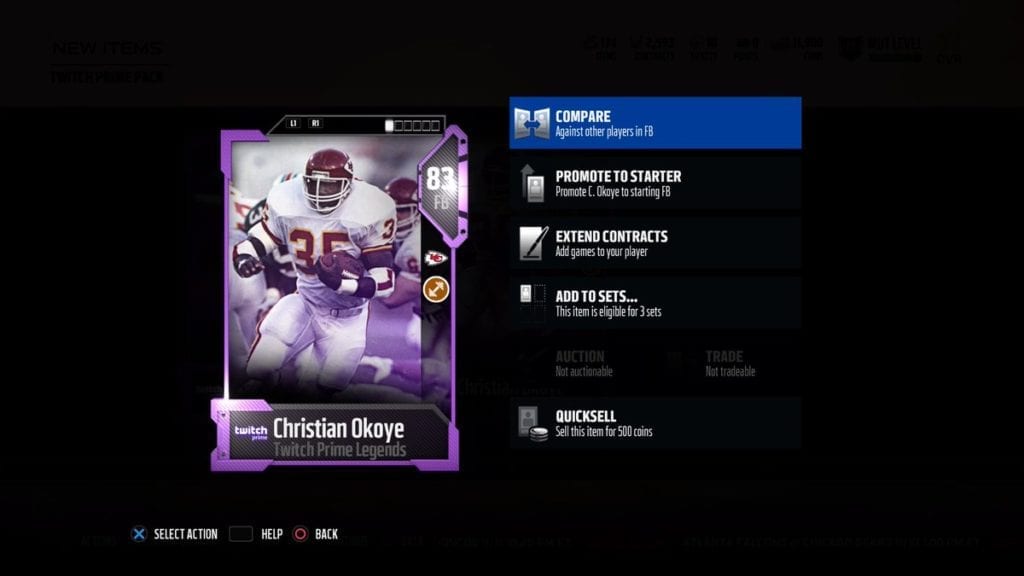 As the Madden season moves along, Madden Ultimate Team is updated with new solos, new cards, and new collections.

This week there have been a couple of key additions to MUT that will add depth and fun to Madden 18’s popular online mode before the full slate of week one games of the real NFL season kicks off.

Let’s break them down. 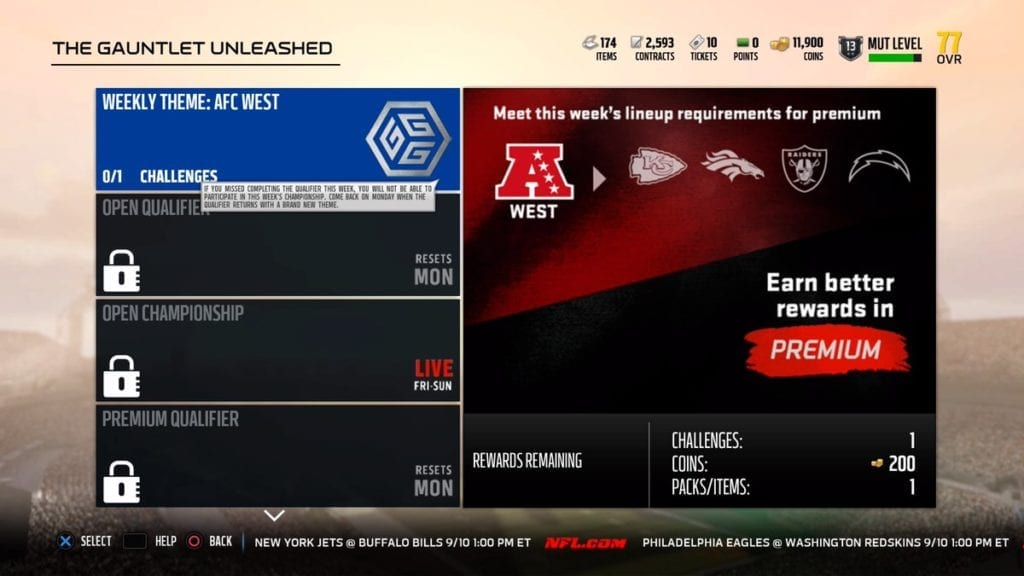 Gauntlet Unleashed is an updated version of the Gauntlet Challenges that have been present in Madden for some time. First releasing on August 28th, these challenges add a tiered style challenge to an old favorite.

Completing these solo challenges will net you rewards including Gauntlet Trophies. There are two phases and two different levels to these challenges. Starting with the phases, the Qualifier phase runs from Monday at 7:30 AM PST through Friday at 7:00 AM PST and presents users with the task of completing seven solo challenge games that increase in challenge and length as you progress.

If you complete the qualifying phase, you are eligible for the Championship which goes from Fridays at 7:30 AM PST to Monday at 7:00 AM PST. The Championship challenges task the player with completing four more games with increasingly difficult opponents.

Next are the two different challenge levels. Players looking for less of a challenge can enter the Open qualifier and progress through the Open Championship. No chemistry or special lineup thresholds are required to complete the challenges in this format.

On the other side of the coin are Premium Qualifiers/Championship, which require a special lineup that coincides with each week’s theme. This week’s theme is AFC West (NFC East was the first week’s theme) and the challenges require a tier 1 chemistry for AFC West players (3 players from each team) to complete.

The rewards for each tier vary with the most important rewards being the Gauntlet Trophies that are required to unlock Gauntlet Champion players. Players in the Gauntlet Champions will continue to be released through January with an 88 overall Terrell Suggs topping the list currently. 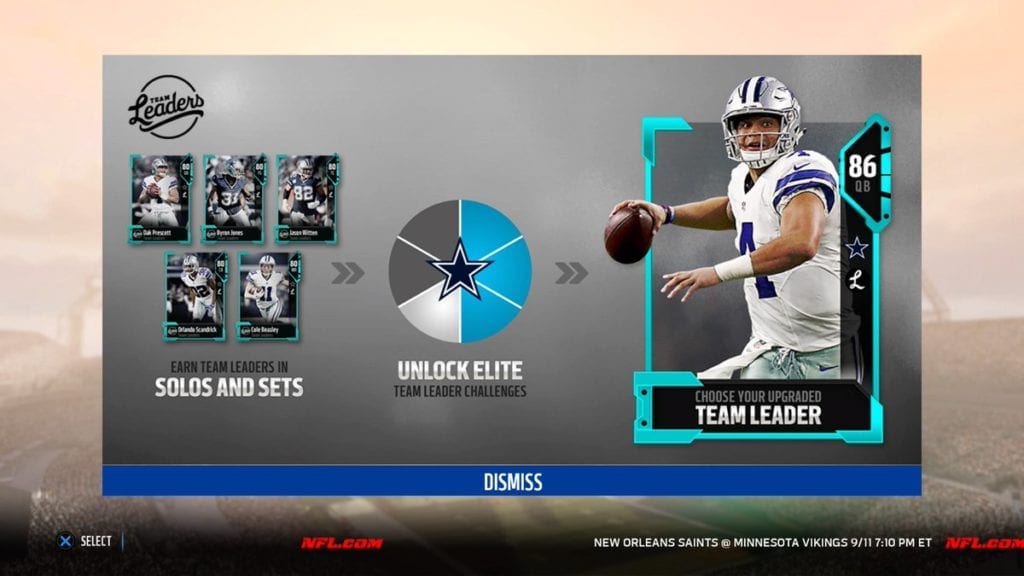 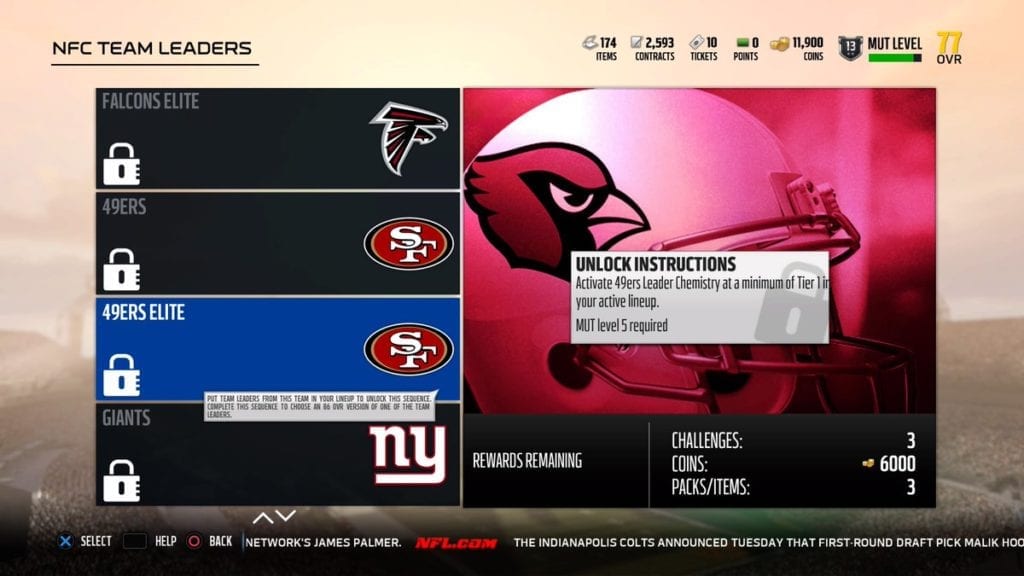 The newest addition to Ultimate Team is the Team Leader solo challenges. There are 16 challenges to complete for each team. The barrier for entry is 12 players from the team whose challenges you are trying to finish. Once players finish the set of challenges for that given team, the reward is to be able to select one of five 80 overall NAT player cards for that team. The choice of players from each team is:

A gold and silver team token are needed to complete each set. Once sets are completed, the Team Leader Heroes are used to complete the 3 game Elite Team Leader challenges for each team. Once completed, players are rewarded with a fantasy pack with the ability to choose one of the five same players from each team but this time, the player chosen is rated 86 overall.

Lastly, there is an AFC and NFC Team Leader master. These Masters, Khalil Mack for the AFC and Odell Beckham Jr. for the NFC are rated 93 overall and are auctionable. To earn these Masters, players must complete the Elite Team Leader solos for each team in the respected conference. 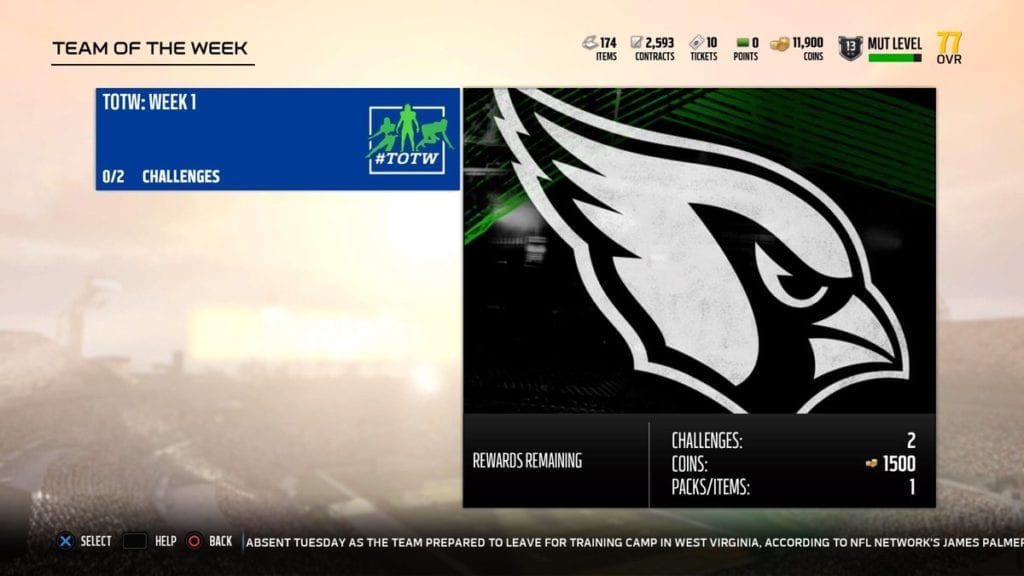 Team of the Week: TOTW is back again for Madden 18. 26 players are needed to complete the set. There are 12 offensive and defensive TOTW players on each respective side of the ball, and two Master players. Derek Carr and Tyronn Mathieu are the first two TOTW Master players. Here is the rest of the list: 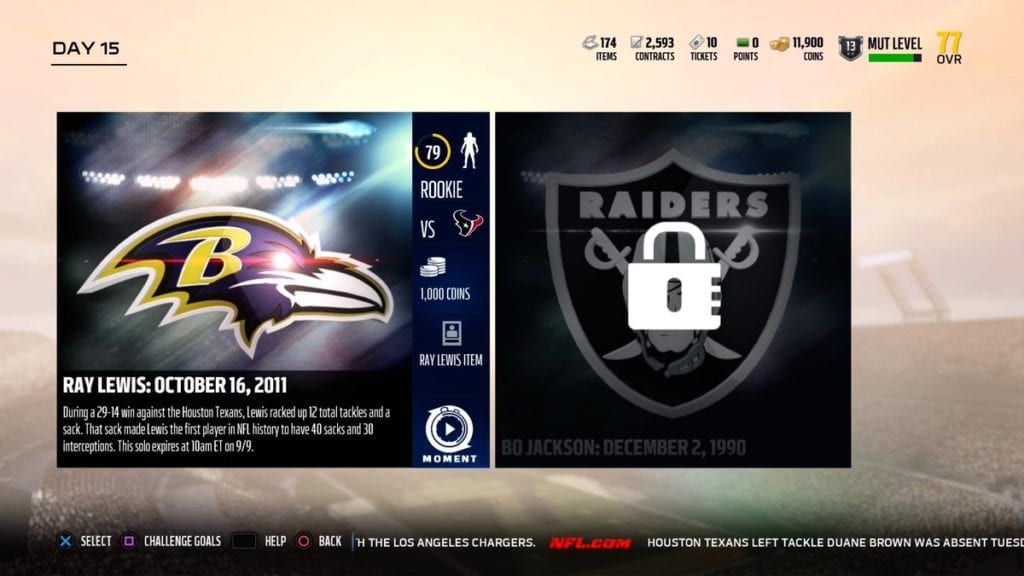 There are only 5 days left to run through 2 solo challenges and collect the daily GOATS before they’re gone. The rewards from these challenges are baby GOAT cards that can be applied to sets to upgrade GOAT cards.

After September 13th, these challenges will be gone. Get as many as you can before the opportunity disappears as these cards, once upgraded, are very valuable. 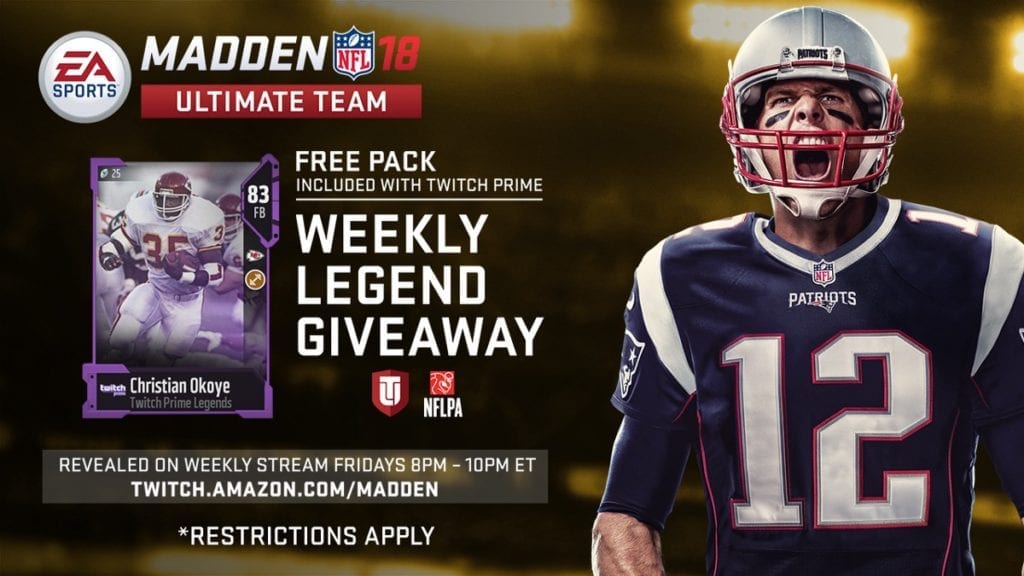 This week’s legend is Christian Okoye. He is upgradeable to a 90 overall with the base Legends card and four Twitch Prime Legends tokens. He joins the list of Legends released so far: Reggie White, Rodney Harrison, and Mike Singletary. Remember that you MUST link your Twitch Prime and EA accounts together to obtain these legends and that Legends disappear 30 days after release.

That’s all for this week in Madden Ultimate Team. We will continue to detail all of the new collections and challenges that release over the course of the season. Don’t forget to visit the OS Forums for more tips and tricks for building the Ultimate Team in Madden 18. Happy hunting!