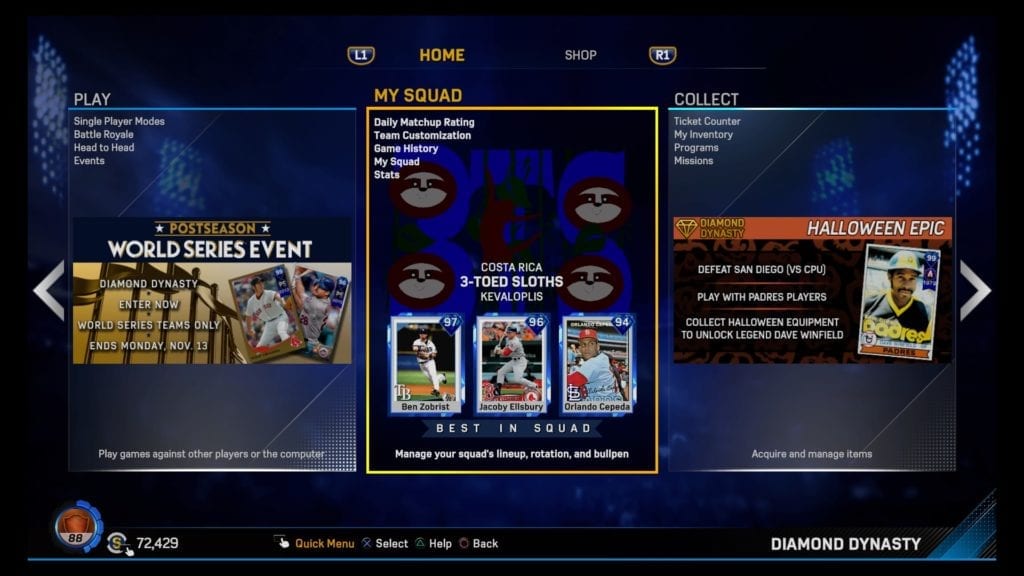 Having already looked at what the grind is worth in sports games’ card-collecting modes and arriving at the conclusion that it would take a very, very long time to accumulate the kind of in-game currency that can be purchased for $100, it’s now a good time then to consider how to actually obtain the valuable cards you desire in these same games. Specifically, we are going to assess which games provide the most viable paths to procuring competitive cards through challenges and the marketplace.

Challenge Content: There are too many missions to count. MLB The Show 17’s Diamond Dynasty mode will reward you with some of the best cards in the game for completing missions that range from daily challenges, to player epics and a multitude of extensive programs where legends are available.

Challenge Difficulty: They don’t call them epics for nothing. If you want to be able to unlock the best players, it’s going to take quite a bit of time to rack up the kinds of stats that are required. The great thing about The Show, however, is how you can always be certain about what goals need to be completed in order to obtain a certain player. This will usually require you to tally stats with another player (or players) first but think of that only as an opportunity to experience the talents of different major leaguers throughout MLB history. Also, you can do plenty of these missions and challenges offline on lower difficulties.

Best Challenge Value: For anyone just starting out, it’s worth completing Conquest to unlock a handful of diamond cards (including a Reggie Jackson card that still rakes this late into the year) and then you can complete Conquest again to obtain a few more, like a Joe Mauer card that’s arguably the best catcher you can get.

Worst Challenge Value: Team epics can net you some good players but be careful when choosing which ones to start. You will eventually need to collect every player on the team in order to complete each team epic and this can be an expensive proposition if the team happens to have even just one premier player (looking at you, Angels and Mike Trout). Conversely, the easier team epics to complete, like the Padres or Phillies for instance, offer disappointing player rewards that aren’t even diamonds.

Market Impressions: It’s almost unfair to compare the MLB The Show 17 market to those from other sports games, as The Show has been out much longer at this point and therefore it’s simply much easier to purchase really good cards with the market being as saturated as it is. 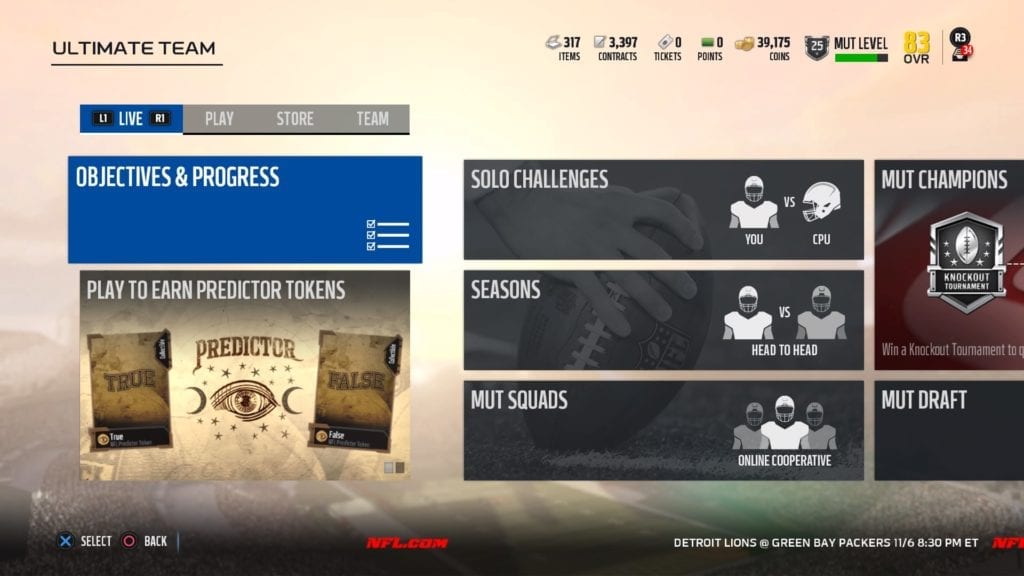 Challenge Content: There are hundreds of missions within Madden Ultimate Team, which are classified into different categories like Chemistry, Team Leaders and Gauntlet. There are even Predictor challenges that allow you to essentially gamble on real NFL games and earn in-game currency if you are good enough at it.

Challenge Difficulty: For the most part, Madden 18 probably has the easiest missions of any of the sports games, as some of them can be completed within a few plays and most don’t ask you to do too much at all on All-Pro or All-Madden difficulty level. If anything, the problem can be that the challenges are too easy and frequently will have you chewing the clock and/or intentionally delaying your game-winning score just to get through them faster while completing your objective.

Best Challenge Value: Gauntlet Unleashed challenges update on a weekly basis and you can earn a gauntlet trophy by doing just three challenges, only the last of which will require you to rise above Rookie difficulty to conquer the slightly more challenging Pro difficulty. It doesn’t take that many gauntlet trophies until you’re unlocking an 86 OVR Philip Rivers, an 87 OVR Adrian Peterson or, eventually, a 90 OVR Donald Penn. It’s also worth finishing up the Gauntlet Unleashed challenges on the weekend where the coin rewards are generous and you will even receive an elite player for your efforts.

Worst Challenge Value: Maybe the Team Leader challenges that will have you complete a slew of challenges, only to reward you with an 80 OVR Team Leader that then has to be used in conjunction with other team leaders to complete another elite set of challenges. The catch is that you have to get other team leaders by using lesser players to assemble tokens and even after doing all of that, you’re still only rewarded with an underwhelming 86 OVR player.

Market Impressions: This is a good time to note that nearly everything in Madden 18 seems designed to get you to buy packs. What gave it away? Well, one of your daily objectives is always to buy a pack. Even when you level up, you will then have access to buying a new level pack. You would think that perhaps they would just reward you with the pack for the accomplishment of moving up a level, but apparently not. Oh, and did I mention that some packs can be bought with in-game currency and the others you’ll have to buy with real money? “Okay, but surely I can just buy a player I really want if I’m spending real money?” Of course not. You’ll buy packs and ONLY packs with your real money. That way EA can make sure to provide you with the least amount of value for your dollar and give you players you don’t want instead. Then, guess what? You’ll just have to buy more packs if you really want that player.

Challenge Content: NHL 18 doesn’t have quite as many missions as Madden but there are categories like 3-star and synergy challenges within Hockey Ultimate Team, as well as weekly Evolution, Milestone and Flashback challenges.

Challenge Difficulty: Any challenges on any difficulty at or below Pro are easy enough to complete but good luck after that. Starting with All-Star but particularly against Superstar difficulty, be prepared to square off with a worthy opponent that will take advantage of any mistake you make with precision ping-pong passing and the superhuman ability to win every battle for a loose puck. Before long, you will be screaming “That’s not fair!” at your TV and possibly throwing your controller in futile anger. Thankfully, you at least don’t have to use contracts for your players when doing the offline challenges.

Best Challenge Value: The NHL Team Challenges only require you to beat each team once for an escalating reward, and you can secure a handful of valuable packs before having to go up against those all-star and superstar squads that will begin to give you fits.

Worst Challenge Value: Weekly challenges like Evolution and Flashback may give you the best chance to build towards a valuable player, but requirements like having to beat a Superstar team by three goals or more make it seem nearly impossible. Three goals!? It’s hard enough to beat them by one goal. You’d think that completing a challenge that difficult would be enough to secure you that coveted evolution card but instead, you’ll have to complete more evolution challenges over the next few weeks AND purchase an expensive carbon collectible and only then you can have that evolution card.

Market Impressions: You can build a decent team of players up to about 87 OVR for relatively cheap but that’s where it starts to get costly if you’re going to upgrade from there, as it’s hard to find any 90-plus OVR players at this time for less than around 80,000 coins or so. The best thing to do if you don’t have that kind of coin is to boost your team as much as possible using player and team synergies. 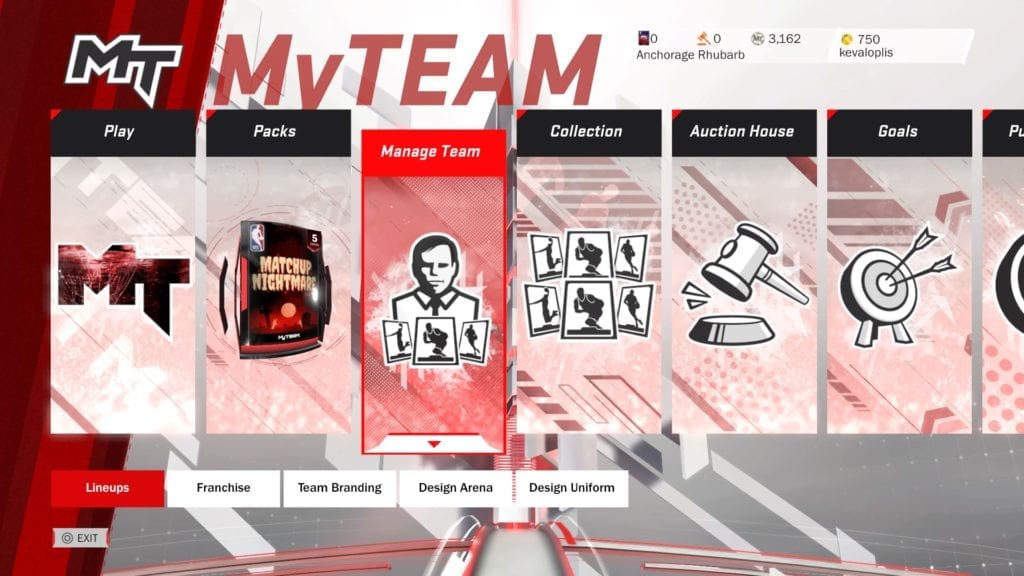 Challenge Content: Perhaps because of NBA 2K18’s focus on MyCareer, MyTeam is lacking a bit this year. There are still quite a few challenges but most fall under two main categories: domination and schedule challenges. The former will reward you with a few items from the team you dominated along with some contracts, strategy cards and a player card, while the latter will provide you with specific types of cards for completion. There are also weekly challenges that will yield a token that can then be redeemed for a worthwhile player after five weeks of completed challenges.

Challenge Difficulties: This will depend largely on how good your team is and your 2K IQ. Similar to NHL 18, pro difficulty and below can be defeated pretty easily against most teams but challenges can get rather tricky in all-time and historic domination if you don’t have the right set of skills on your squad, or if you don’t know some of the cheesier plays to run over and over again to take advantage of the AI’s deficiencies and rack up the required MT. Adding to the frustration is that unlike NHL 18, you’re forced to use contracts in offline challenges, including some that have you playing from behind and trying to mount a difficult comeback.

Best Challenge Value: The domination challenges are a bit of a commitment (a full game with five minute quarters) but the player card that you get for beating each team always retains the possibility of landing you a valuable asset for your rotation. Also, doing the first schedule challenge of each team will provide you with some contracts that you’re definitely going to need.

Worst Challenge Value: The schedule challenges directly following those aforementioned initial contract ones of each team will provide you with injury and strategy cards when you really wish they would just give you some more contracts instead. Along the same lines, domination is a bit of a mixed bag in that you end up with more strategy cards and less contract cards than you would prefer.

Market Impressions: Speaking of contract cards, I can’t be the only one that finds my team constantly desperate for contracts for my players, even after just recently completing a bunch of schedule challenges. This eventually leads to having to purchase contracts with MT instead, which naturally then cuts into the ability to purchase better players on the market for the team.

All things considered, MLB The Show 17 seems to have created the best model for rewarding people who play the game regularly by offering clear and attainable paths to obtaining specific valuable cards without having to sacrifice too much in-game currency or other quality players from your collection for rewards you don’t really want. In other words, they don’t make you jump through a lot of hoops. The other games (especially the two EA ones) will all too often entice with goals and perhaps a small reward to get you on your way to said goal, but then leave you to fend for yourself to either save up enough in-game currency to purchase the rest of the rewards or, even worse, have you purchase packs that MIGHT get you the cards you want, but probably won’t.