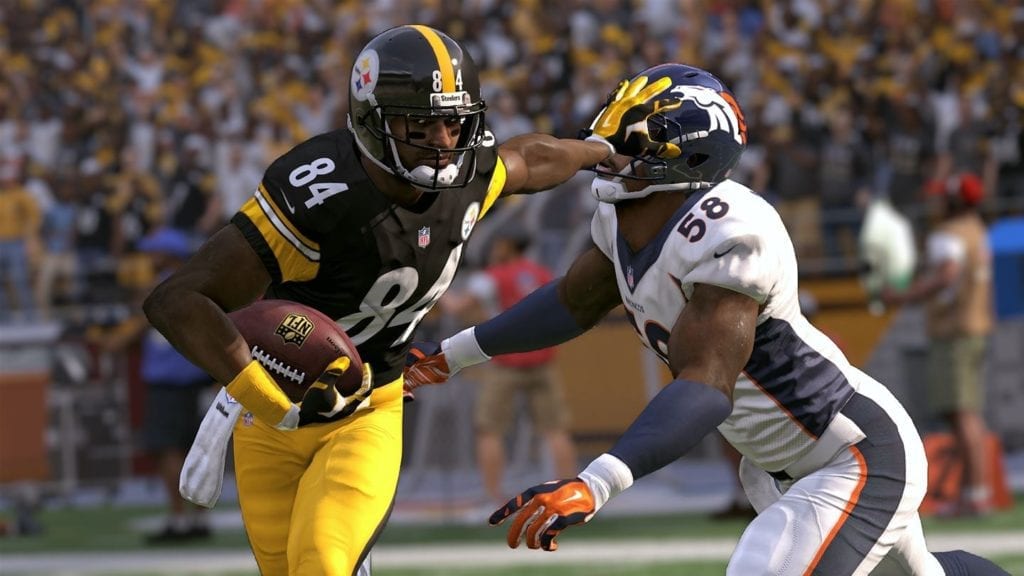 Every year EA releases a new installment of Madden. Modes are refined and gameplay is adjusted to better fit the community’s wants and needs. However, one thing that ultimately stays the same is online play. Sure, EA adds minor enhancements, or a bigger mode like Draft Champions and Madden Ultimate Team, but the infrastructure remains largely intact.

So here are my online impressions for Madden 17 one week later.

The stability of EA’s servers have generally been a strong suit for the popular video game juggernaut. In the past, if there was an issue with lag or a disconnect, one of the two users were usually at fault. This remains the case with EA’s latest installment. After playing several head-to-head games throughout the week, there have been no issues to report.

However, one thing I did notice was an apparent issue with game speed during online play. In each of my games played online, the game speed was set to slow. But this was not the case on the field as the game felt almost “arcade” speed. Players moved around at lightning-fast speeds, eluding tackles and outrunning defenders with ease. The difference between slow offline in comparison to online was night and day. I expect EA will fix this issue in an update.

It’s been a breath of fresh air to see EA do things differently with jersey color. Way too many times I would choose a jersey that looked eerily similar to my opponent’s uniform. This year, EA allowed users to choose dark or light jerseys, which made things less confusing for the opposition. Gone are the days of selecting all white, only to have your opponent select the white jersey with light-colored pants. Thank you, EA.

Note: EA’s servers were offline earlier in the week after being impacted by a DDoS attack.

Below is a look at the new kicking meter in Madden 17.

Surprisingly, the hardest thing to adapt to during online play is the kicking meter. Most of the time, the meter works flawlessly, with little to no delay. However, I experienced my fair share of issues with the meter. At times, the meter would seem unresponsive or delayed by a split second. This would result in a missed field goal or extra point, playing a key factor in the outcome of the game.

Translating the presentation package from offline to online has always been an issue for EA. Maybe it’s not entirely EA’s fault. After all, not everyone wants to sit down and play a video game for an hour and some odd minutes. Adding more presentation, like replays and stat overlays to online gaming, would eventually become more of a nuisance than anything. With that said, it would be nice to see replays throughout the game. Everyone enjoys revisiting a spectacular catch or user interception. Stat overlays are also welcomed in any sports game.

I would also prefer to see more presentation elements in Connected Franchise. I am in a few 32-man online leagues and believe presentation would add to the excitement behind each game. Who wouldn’t want to see a highlight reel from earlier in the game? How about a touchdown near the pylon replayed with EA’s new pylon camera? It won’t be added in this year’s game, but this is something EA should strive for in the future. (And if there are technical issues or concerns with de-syncs keeping presentation to a minimum online, they need to figure out a way to solve it.)

Madden Ultimate Team
Madden Ultimate Team has become a popular mode for EA over the last several years. Much like last year’s installment, you begin MUT by choosing your play style, run or pass. After getting a few starter packs, you are then asked to choose a pair of players from one of the 32 NFL teams. This is where things get dicey. Do I stick to my favorite team and begin my Madden Ultimate Team with Ndamukong Suh and Jarvis Landry, or do I go against the grain and do what’s best for my play style? Ultimately I chose to roll with the Rams, selecting superstar running back Todd Gurley and All-Pro defensive tackle Aaron Donald.

One of the biggest gripes I had when playing Ultimate Team was the matchmaking. In my very first game, I got paired with a guy who had several upgrades to his team. My team, which was rated 61 overall, was matched up against a team rated 71 overall. Even worse, after taking a two-touchdown lead early in the second quarter, the game disconnected. Certainly I would be given the win, right? Nope, the game did not count. Maybe the servers just dropped and nobody was at fault. Heck, maybe it was my connection that caused the disconnection. Either way, I would have liked to see the result count, given the nature of the score.

Regardless, if you were a fan of Madden Ultimate Team in the past, you will be very pleased with this year’s installment.

EA didn’t do much to improve Draft Champions, which isn’t necessarily a bad thing. In this mode, users draft players similar to how you would in your friend’s fantasy football league. Users are given the option to select from three players with similar ratings and different positions. Will you put emphasis on stopping the run or would you prefer to load up at cornerback? The choice is yours.

The best part about Draft Champions is you get a new experience every time you draft. After selecting a team, you are given a four-game season. Win those four games and you will receive valuable points, in addition to a trophy.

In the end, this is the best Madden I’ve played in a decade. The offensive line is greatly improved, and the interaction between the defensive backs and wide receivers is awesome. I’ve been playing Madden for nearly two decades, and this version stands up to any other version that’s come before. Whether you want to try out Madden Ultimate Team or test your luck in head-to-head games versus randoms, Madden 17 is worth checking out this year.

Team Defense Must Improve in NBA 2K17
Madden NFL 17: The Little Things Are Piling Up in CFM