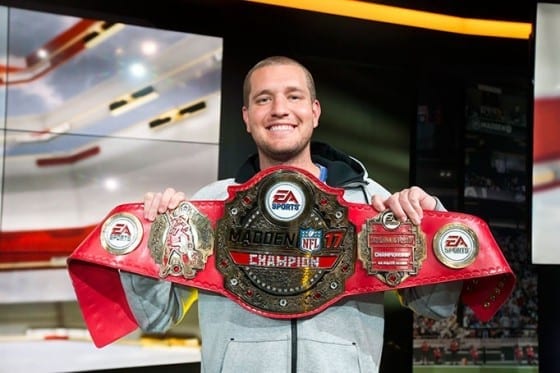 Sixteen of the top Madden 17 players locked up in Burbank, CA this past weekend for their shot at $150,000, a title belt that would make The Rock blush and the right to call themselves Madden 17 Champion. Before the weekend was over, a total of $500,000 would be given away to the top-32 players.

The quarterfinals started off with a battle between Skimbo and LOS. The match was hyped as Skimbo being ranked as the top player going into the tournament, while LOS was riding a hot streak and ranked 31 overall. At half, Skimbo lead 35–21 after stalling out on his first possession and then giving up a score on LOS’ first drive. In his first possession of the second half, LOS scored after Skimbo cleared his safety out leaving DeAndre Hopkins wide open for the touchdown. That would be the last time LOS got into the end zone as Skimbo shut him down with great defense and added 10 points on to his victory, taking out LOS by a score of 45-28.

Game two saw #7 Young KIV taking on #9 SpotMePlzzz in a game most people saw being one of the higher scoring matchups. Young KIV user-lurked SpotMe with just seconds left in the first half and went into halftime with a 24-10 lead. SpotMe missed an extra point on a missed button push, which was very costly in the moment. The second half saw an offensive explosion by SpotMe as he scored 24 points to KIV’s 10. With seconds left on the clock, SpotMe and KIV played a knee and timeout battle that was won by SpotMe as he took a knee on third down and called his own timeout before kicking a field goal to take the game and punch his ticket to the semifinals.

Then it was time for a match between two different personalities in the quiet Boogz and the hype train Joke. This was the lowest-scoring game going into half as Boogz lead Joke 7-3. The second half started off all Joke, but in the fourth quarter Boogz came back with a toss to make it a three-point game, then followed it up with a fantastic user-lurk INT to get the ball back in field goal range. Boogz would tack on three points to make it 17-17, but the last laugh would go to Joke as he would take the match with a field goal of his own, beating Boogz 20-17.

The last game of the quarterfinals would put Problem up against Volterax. At various points, Volterax had drawn criticism for his “overuse” of the swerve, a glitch where a user-controlled receiver pushes inside the route then back outside in a “swerve” maneuver causing the defender to be rendered almost useless. But Problem is an elite Madden player, and he was ready for anything. Problem did not have an issue dealing with Volterax, as he was ready for the deep pass and intercepted Volt when he tried to hit the swerve — while also bottling up his Chris Johnson. Problem lead 17-7 at half and didn’t look back, taking Volt down 30-13.

The semifinals saw Skimbo, who has never won a live event, take on SpotMePlzzz, who was looking to be the first to win two events. Both guys came to play as the game was back and forth throughout the first half of football. Skimbo’s Moss made play after play, but SpotMe took a touchdown away from Skimbo with a user interception in the end zone with just 1:27 left to go in the 2nd. The half would end 14-14. The halftime adjustments were made by Skimbo as he would put up another two touchdowns to take the match from SpotMePlzzz 28-14.

Then it was time for the match we were all waiting for, Problem vs Joke. Problem said being able to go home for the night and get rest in his own bed would be the difference for him in the final day of play. But Joke is no slouch and was ready to take on the veteran in the second game of day three. This was a defensive game going into halftime with a score of 10-3. Problem struggled all game with his offense, but his special teams and Deion Sanders made all the difference with two kick returns for touchdowns. He stopped Joke’s final drive, and Problem won the best game of the tournament in a 28-27 comeback.

There were fireworks before the match even started. Problem was asked about a comment Skimbo had made earlier, saying if there was one person that couldn’t beat him it was Problem. Standing on the stage, Problem called his shot and was visibly ready for his finals matchup with Skimbo.

There was more than tension in the air as $100K was up for grabs in the next four quarters. The first strike was hit by Skimbo, who hit Moss on a pass to get inside the 10-yard line, then followed it up with a toss to Ricky Williams for an easy score.

In the second quarter, Problem would use his run game to give himself an opportunity to score, but an overthrow by Aaron Rodgers to Demetrius Harris meant he had to settle for a field goal, cutting Skimbo’s lead to 10-3.

By half, Skimbo would see Problem put up another field goal. Overall, Problem was playing well between the 20s, but was having issues in the red zone. That would all change in the third quarter as Problem was able to put another return into the end zone and take the lead 20-17.

The fourth quarter was a back-and-forth battle, much like the first three quarters, as Skimbo tossed a deep pass to Demaryius Thomas late in the game to take a four-point lead with just seconds left. Problem dinked, dumped and bombed Skimbo down to the 21-yard line with just six seconds left on the clock. Rodgers was able to throw a pass into the end zone that was not caught but left one second on the clock. Problem’s last pass was broken up, and Skimbo stood up, dropped his soundproof headset and gave an emotional interview to ZFarls.

It was a great weekend for Madden eSports that saw newcomers and vets give it their all. I honestly thought Problem was going to have a huge game in the finals as his struggles against Joke made him hit the sticks with Young KIV — a player who runs a similar offense to Skimbo — prior to the showdown. However, it seemed like the issues plaguing Problem did not quite get solved. A lack of red-zone scoring and a neutered special teams attack led to Problem falling short, and that is a credit to Skimbo.