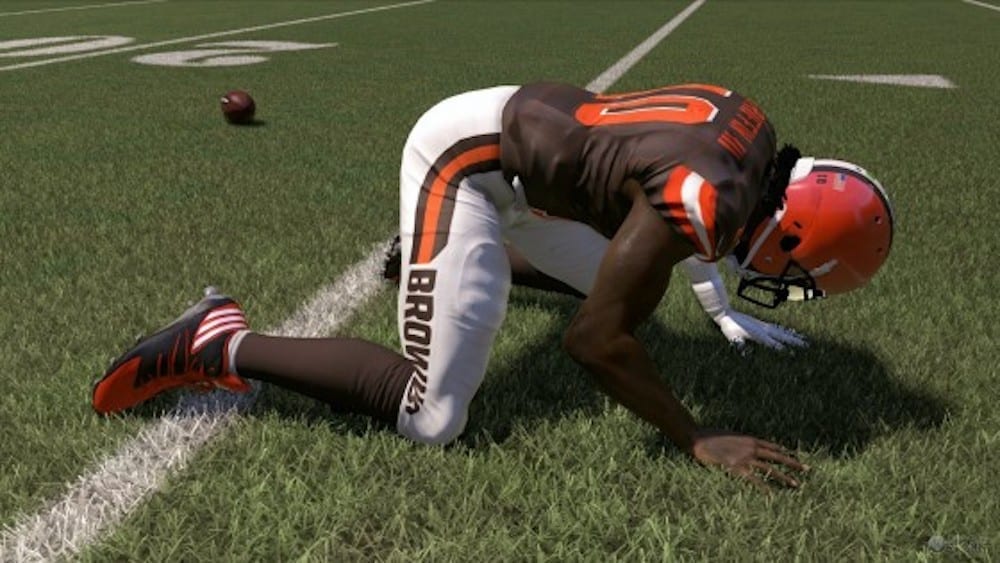 Madden has always been a game that deals each year in incremental improvements rather than growing by leaps in bounds. And while there may be much to like about the fine-tuned AI in Madden 17, that doesn’t mean there aren’t areas that could still use some work for next year.

Though the running game may have earned a large portion of the developers’ attention on the offensive side of the ball — resulting in linemen being more trustworthy than they’ve ever been — there are logic issues in blocking that remain unresolved. These become especially apparent on pitch plays, where a pulling lineman will frequently get confused about who he should be attacking on the outside to best spring a back for big yardage.

It’s hard enough to run the ball effectively when a lineman isn’t blocking who you necessarily feel he should be, and in the above example a guard is forced to make an important decision about which of two free defenders he should take out. However, he makes the much more head-scratching call to just not block either of them — and the running back predictably gets destroyed.

When playing against the CPU on All-Madden difficulty, you would expect to compete against the shrewdest opponent, but that isn’t always the case. CPU quarterbacks, for one thing, are prone to making some baffling decisions with the ball amidst picking your defense apart. The most regular issue is a QB throwing the ball away when faced with even a hint of pressure. The above video clip, for instance, shows Drew Brees being forced to get rid of the ball when he feels the heat coming, but he does so by throwing the ball right over the head of a wide-open receiver. Why not just check it down to him rather than to the sidelines and pick up a short gain? That’s what the real Drew Brees would do.

On defense, the CPU may take advantage of your errant throws at nearly every turn, but it often struggles when choosing the best angles to make a tackle. In instances where a savvy human opponent would know to just push a button to reach out and complete the tackle, the CPU often makes the inexplicable choice to instead simply wait until the ball carrier gets really close to try and bring him down. This allows the runner to often go right by them and leaves the CPU defenders looking like they lack both the awareness and physicality to belong in the NFL.

But the CPU’s biggest problem in Madden remains the same one it’s always been: grasping the complexities of time management when the game is on the line. As if the CPU were forever saddled with the terrifying prospect of an even less capable Andy Reid as coach, it never seems to understand when is the best time to call a timeout, run a no-huddle offense or spike the ball. As in previous incarnations of Madden, games can and will often end with the CPU frantically lining up for one last pass with time expiring when it’s only trailing by a field goal, are well within field-goal range and even have a timeout in its back pocket that it’s chosen not to use for some reason.

As Herm Edwards once famously said, “you play to win the game.” And while I’ll happily take the win any time I can get it, it’s always a little more satisfying when you beat someone who you feel was giving you their best shot, not someone who was so limited by programming that you actually felt guilty about the victory afterwards.

Madden NFL 17 Tuning Update Available Now, Here Are The Details (9-23)
$1 Million Up for Grabs in the Madden NFL 17 Championship Series