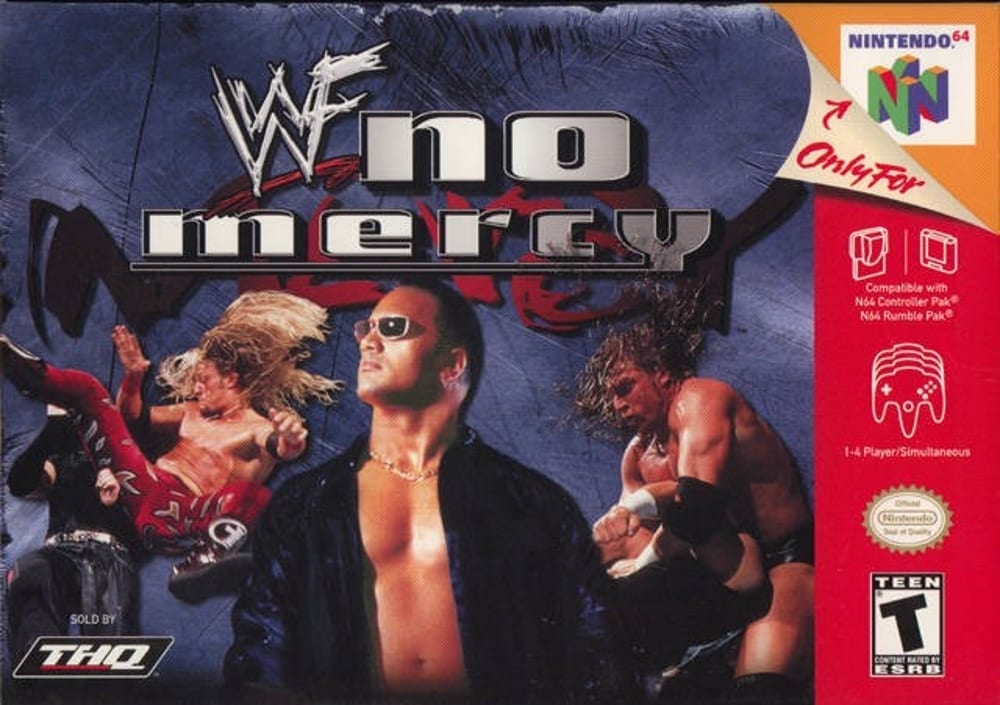 In celebration of the upcoming release of WWE 2K17, this week’s Throwback Thursday highlights a game many consider to be the greatest wrestling video game ever made.

Debates will rage for centuries about which of THQ/AKI’s Nintendo 64 wrestling games was their crowning achievement. Their triumphs for WCW and New Japan left wrestling fans begging for a WWF adaptation. WWF’s contract with Acclaim Sports expired in 1999 after the releases of WWF War Zone and WWF Attitude. Much to the fans’ delight, WWE immediately pounced on a new partnership with THQ/AKI. Their first title, WWF Wrestlemania 2000, was met with universal acclaim for its innovation and depth. However, Wrestlemania 2000’s sequel, WWF No Mercy, put itself in another class when it was released on November 17, 2000.

Looking back, WWF’s 2000 roster was one of the most impressive collections of wrestlers under a single promotion in the history of the sport. At the time of the game’s release, the WWF was in the prime of one of their all-time cultural peaks: the Attitude Era. This combination was the perfect storm, and WWF No Mercy was a masterpiece.

What Made It Great?

No Mercy’s success stemmed from three tried-and-true ingredients for video game success: high replay incentive, rock-solid core gameplay, and a tremendous and varied roster. Over 60 wrestlers made the cut, from X-Pac to Howard Finkel. And, as many will fondly recall, one could unlock one of The Godfather’s valets known simply as “Ho.” In a game that rewards you a couple hundred dollars for winning the single-player mode’s championship match, Ho’s moderate price of $500,000 was ludicrously tempting for completionists.

Wrestling might be the most difficult sport to realistically capture in video game form, but No Mercy‘s gameplay was fantastic. Wrestlers moved, collided and fluidly attacked. Different weights influenced different fighting styles. Viscera felt wildly different than Essa Rios. THQ/AKI expanded move capabilities with each subsequent title, but No Mercy saw a host of in-ring innovations that diversified strategy.

THQ/AKI understood how to maximize every last ounce of the Nintendo 64’s power. When compared to Superman 64, WWF No Mercy is a Leonardo Da Vinci painting (but to be fair, most things are). There was a single-player mode that put the wrestler of your choosing in a series of different real-life storylines in attempts to win various championship belts and earn in-game currency. Brilliantly, THQ/AKI created a storyline tree wherein 100 percent completionists had to lose certain matches to uncover all of the different plots. Survival mode, an almost-endless Royal Rumble, pitted the wrestler of your choice against swarms of challengers. Gradually increasing difficulty levels and currency rewards gave the almost-horde mode significant replay value.

Create-A-Wrestler was massive, and the Smackdown Mall was a lovely shop wherein players used earned currency to acquire new attires, moves, weapons, wrestlers and arenas. The Smackdown Mall contained a number of must-have items at expensive costs, which encouraged multiple playthroughs. Iconic legend attires, violent banned moves and over-the-top weapons highlighted the Mall’s many tempting selections. In addition to thinly veiled knockoffs of Hulk Hogan’s (who was with WCW at the time) outfits, you could also unlock items like a refrigerator-sized copy of the Rock’s “The Rock Says” book or trashcan-sized Stevewiser beer can. Quality and quantity drove a significant amount of playtime to unlock the Smackdown Mall’s many treasures — unless you had a GameShark.

To top it all off, No Mercy had what many scholars would argue as the greatest menu music in the history of video games.

What Could Today’s Games Learn From It?

2K has certainly made incredible strides towards creating the ultimate wrestling experience, and it is easy to see No Mercy‘s impact. The series’ roster size and creation suite undoubtedly stem from the standards that No Mercy set in 2000. THQ and 2K each saw the value of a strong creation community and made it a top priority with each WWE release. The Smackdown Mall, responsible for a substantial amount of additional playthroughs, would be lost in today’s DLC-centered industry. However, 2K includes a number of in-game unlockables in each release in addition to DLC move sets and characters.

How Does it Hold Up Today?

The in-ring experience is still a challenge and still flows magnificently. The creation suite is, even 16 years later, a triumph. If one so chose to play off of an original cartridge and edit outfits and names for today’s WWE, you could do so with exceptional accuracy. That’s how deceptively deep the create-a-wrestler suite still is in this game.

A healthy modding community keeps the game alive and currently updated thanks to the beauty of emulation. In addition to giving the game a complete update, annoyances like the entrance cutaway during the Royal Rumble and the inability to edit non-created wrestlers’ move sets are overridden. Emulator-powered graphics updates, state saves and wireless USB Nintendo 64 controllers modernize No Mercy while keeping the core masterpiece intact.

If you still own your cartridge, unearth your ridiculously cringe-worthy created wrestlers, jump back into Survival mode and spam that Bradshaw Hammer to see if you can reach the end.