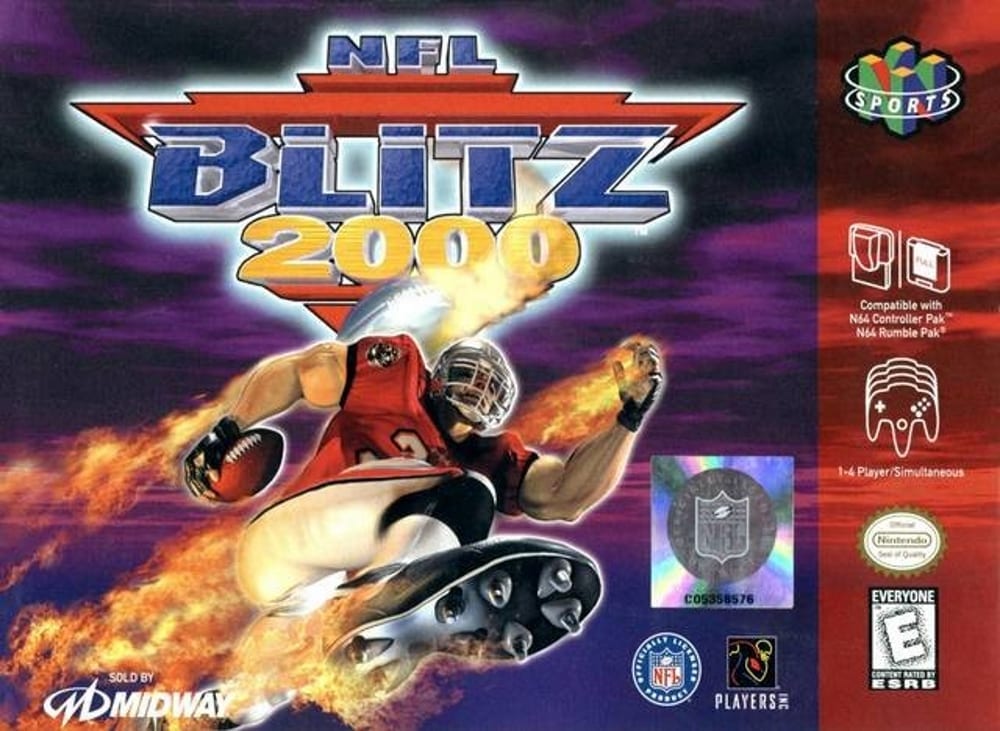 Chances are, if you frequent Operation Sports, this week’s Throwback Thursday needs no introduction whatsoever. For those who did not grow up with this violent magnum opus, Midway, the creators of many of the greatest arcade games ever, sought to carry the immense success of NBA Jam to other sports. And boy, did it ever.

Much like last week’s MVP Baseball 2005 feature, the pre-monopoly world provided the NFL with a bounty of games that could be purchased for a single season: NFL 2K, Madden, NFL GameDay, NFL Quarterback Club, and NFL Blitz.

In 1997, the original NFL Blitz was released to arcades. It saw 7-on-7, lightning-fast gameplay that allowed pass interference, violent wrestling moves as late hits and gratuitous showboating. The clock stopped after every play, first downs were 30 yards instead of 10 and field goals were automatic. It was a tremendous cultural and commercial success, but 1999’s NFL Blitz 2000 was the series’ crown jewel.

At first, NFL Blitz’s gameplay can be either decidedly frustrating or unreasonably fun. Fortunately, the frustration wears off by the third quarter, and newcomers are all but hooked by the frantic pace and barbaric hits.

Timing is everything. The fine art of pass interference off the line of scrimmage and the right moment to launch your defensive backs towards the ball for an interception is not learned overnight. Mastering the right millisecond for your quarterback to hurdle over blitzing linemen takes practice. Furthermore, different players will blitz differently, and identifying your go-to plays in, say, 3rd and 35 situations (Deep Attack) is critical.

But that’s not to say the game didn’t have your back. Fumbles and interceptions were programmed into close games and later quarters to somewhat level the playing field. It was not unheard of to see a combined 10 turnovers in a game (and, of course, they always came at the worst possible time). In your humble Blitz veteran author’s opinion, NFL Blitz 2000 had the right balance of random fumbles and interceptions when compared to other iterations of the series.

NFL Blitz 2000 also included two revolutionary features: four players at once and Create-a-Play mode. Four-player mode pits two-on-two, and teammates alternate playing quarterback and selecting defensive plays. This allowed for even further depth, as players could directly control their own blitzing patterns and routes mid-play. If a player caught the ball three plays in a row, an NBA Jam-style “on-fire” upgrade was given to the entire team, perishing when they got sacked or allowed a first down. Fire became devastating in 2-on-2.

Create-a-Play is self-explanatory, but proper utilization of well crafted plays provided the player with a secret arsenal of unique weapons that other teams could not touch. These were on top of the extra page of plays for defense and two extra pages for offense. If you input the Extra Plays code (3-3-3-down) at the matchup screen, you unlocked a fourth.

As if one needed more out of a game, NFL Blitz provided players the ability to literally chokeslam opponents after the whistle. Late hits, while reviled by the NFL, became synonymous with NFL Blitz. Few things in this life are more debilitating than having three defensive linemen hit you with elbow drops and leg drops after stopping you a yard short of your 4th-and-goal.

Oh, and Tim Kitzrow, the voice of NBA Jam, calls all of the action. This game is akin to the Mona Lisa.

Gameplay, gameplay, gameplay. What made Blitz such a roaring success is the same thing that made ESPN NFL 2K5 one of the greatest games ever made: excellent and fun gameplay. Furthermore, NFL Blitz 2000’s gameplay was different. No other NFL game let you clothesline wide receivers after the play or purposefully took field goals out of the equation by making them especially difficult. Blitz was fast, brutal and thrilling.

Secret codes, while wholesomely accessible in this day and age, were packed into NFL Blitz. Codes such as players looking like Raiden from Mortal Kombat or playing on asphalt turf were purely cosmetic, but created additional depth and incentive to play again. High-impact cheats such as “Hyper Blitz,” “No First Downs” and “Super Field Goals” were refreshing and made Blitz feel like a different game. What if these bonkers game tweaks were hidden secrets in mainstream sports titles? Could they just be absurd slider adjustments that invariably create an entirely new experience within an already competent game?

After the success of the NBA Jam revival in 2010, EA rebooted NFL Blitz for PS3 and Xbox 360 in 2012. Gameplay was tight and the visuals were excellent. Inexplicably, however, certain season modes could only be played online, and server struggles plagued the re-release. The NFL mandated the removal of the late hits, and Kitzrow’s commentary was cleaned up for more of a PG-rated experience.

As with other entries in the Throwback Thursday series, a hardly upgraded port of the original would be immensely popular on today’s consoles. Let’s just hope the developers take notice and steer clear of too many changes.

Gamers will find the bone-crunching hit montage intro video somewhat difficult to watch given the wealth of concussion knowledge possessed by even the most casual football fan, but otherwise, NFL Blitz 2000 is still an absolute masterpiece. Thankfully, it is available on a number of vintage consoles. Defeating every last NFL team is still a triumphant challenge, and coming up with your own rules for 2-on-2 makes for a seemingly endless experience. The 1999 rosters are chock full of generational talents, such as Daunte Culpepper and Randy Moss, and franchises in transition, such as the pre-Tom Brady Patriots.

While your humble author was quite fond of the Nintendo 64 version, there is a particular breed of unparalleled ’90s nostalgia that comes alive with four players hunched over an NFL Blitz 2000 Gold/NBA Showtime combo arcade machine. If you have one for sale, please let your humble Blitz veteran author know.