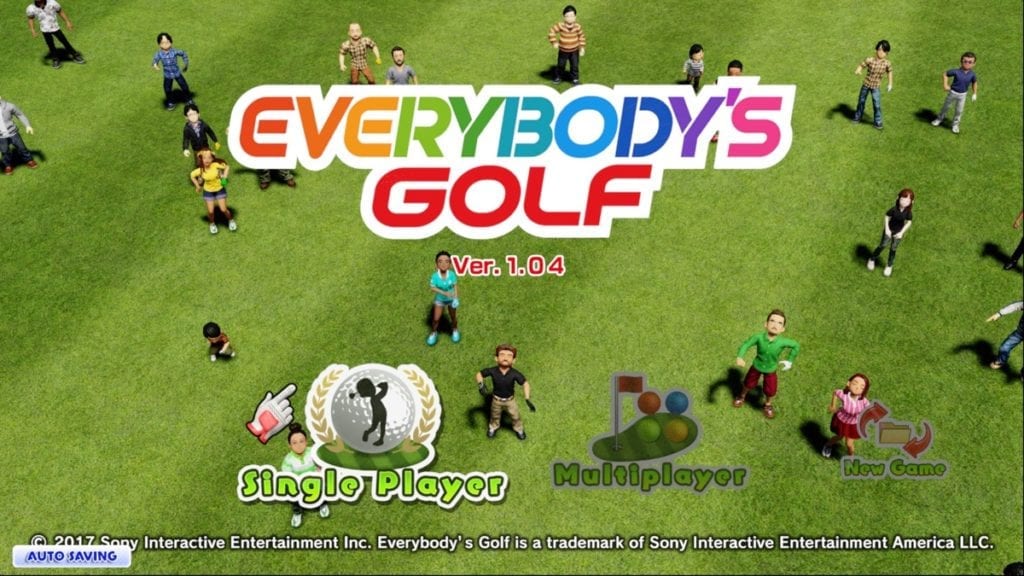 Originally released in 1997, Everybody’s Golf (known as Hot Shots Golf in North America before deciding to drop the name and use the one name for this year’s iteration) has come a long way in its 20 years of existence on Playstation consoles.

Always known as a tongue-in-cheek version playing on the luxury and elitism that the game of golf is, the brand has always given its players a light-hearted approach to the game with its cartoon-like characters, and variety of side modes like mini-golf and fishing. The one thing that can’t be denied is that the development team at Clap Hanz (and the previous development team over at Camelot Software) always looked to let the play of the game do the talking for their product.

Despite the wacky characters and cartoon feel, the realism of golf and preciseness of ball physics demanded of the sport was and is embraced and shown in its full capacity within Everybody’s Golf. This year is no different, and we’ve been given a truly open world experience with the same level of golf authenticity we’ve come to expect.

Let’s tee off and see what this year’s game gives us. Everybody’s Golf has always, as its title obviously displays, been intended for any and everybody to pick up and play. Playing a great game of golf with great accuracy and giving quite the challenge, it can also teach the game of golf to newcomers. You get an early example of this talking to Professor Koenji in the Home Area, who quizzes you on various areas of golf and the game of Everybody’s Golf itself. Backtracking quickly here, when you start up the game you’re given an introduction session by Chairman Suzuki, head of Everybody’s Golf Association and his assistant Hikari.

From there you’re taken directly to character customization, which is pretty robust. This is a change from the norm, as you usually play through and unlock characters. You can build your player either based on a preset or from scratch.

Additional items will be unlocked for your character as you play through, and can be changed at any time in the pause menu when you’re not in a match. You’ll definitely see an RPG-like element when creating your character. One neat thing you’ll notice is that you have the ability to allow your completed player to be saved as a template for other players to use online when building their players.

After the process is completed, the game gets you to register in your first single-player tournament. This is where the fun of the game comes out.

The first thing you’re going to quickly notice is how vast the world of Golf Island is; in between the online and offline areas, the open world areas and courses are well done and vast. Jumping online in Everybody’s Golf offers a social and unique experience; as you travel around courses, you’ll see other players running around, swimming in lakes, fishing and teeing off to start their next round.

That’s part of the beauty of the game — the ability to interact with other players at any time, while having the ability to do your own thing and exploration as you see fit. In earlier iterations of the game, players would link up in a lobby and get sent off to a course to tee off. This year, the courses and open world can be considered to be your lobby. There are various hidden items around the course, so again, the RPG element comes back into play.

You can share information with other players on where these items are found, adding to the sociability of the online atmosphere. This year’s game also has a different set up for matchmaking, where this is done on a worldwide level with every region. This, in turn, means that you can play a match with players from various areas around the world.

At first, it will seem almost insane navigating around as there are players literally everywhere, doing various things. You quickly become used to this quick pace as you settle in to the game and start to enjoy yourself, making new golfing partners along the way.

The online experience so far is pretty smooth with virtually no hitches or hiccups. You get into matches fairly quickly, and the level of competition can be both challenging and rewarding.

There are currently a few modes online to get players socializing and hitting the links together. Daily Challenge pits players against each other through the same nine holes of golf; you’ll challenge yourself to be at your best, trying to ensure you’re ahead of the multitude of other players who are trying to do the same.

Then, you’ve got Turf War. The wildness you see around the course as players run and pace around is heavily enforced; two teams are slapped together onto a course and each player on their respective team runs around playing the holes on the course in the order that they please. Points that a player earns on each hole are added to their team’s score, and the team with the most points “takes” the hole.

The amount panic and imperative need for success make this mode a fun time for all, and is a well-thought out change of pace to a multiplayer team mode. A third online mode, International Online Tournament, is “under construction” and not ready for play as of launch. The “offline” experience of the game also offers a rewarding experience, with a few new changes seen for the first time this year; these changes also translate online. The one thing that can be a drag offline is how comparatively empty the course is to online.

As expected in an Everybody’s Golf game, there is always what seems to be, at first, a long drawn out experience to rank up your player. You start at rank 1, and in order to rank up your levels playing and completing tournaments is a must.

As you rank up, you’ll face off against three VS characters per rank and must earn a certain amount of XP before you can face the next VS character. There isn’t any penalty if you happen to lose a match, so you can always go back and give it another swing to try and beat a respective character.

From time to time, you’ll match up against secret VS characters as well after meeting the respective requirements.

After defeating them, they teach you how to drive the golf cart around, and it is then accessible for your use. Fishing isn’t unlocked until rank 4. The pond in the Home Area is where you can hone your fishing skills, and there is also a nearby pier that you can fish off of which is locked until your fishing level reaches 8.

A fishing rod and bait must be rented in order to fish in the Home Area, but is inexpensive to do. Driving a golf cart and fishing can be done while on a course, but that is only permitted when you’re online.

Character abilities improve when a good shot is taken during a round of play, and for the first time you can level up individual clubs; the example given in the game is if you were to hit consecutive 100 percent Power Shots with your 1W club, thus increasing your proficiency with 1W clubs.

This translates to certain effects like having longer shots with the 1W club. This also applies to other numbered clubs in your bag. Another given example is taking a lot of skillful shots that put the ball right next to the pin. Doing so increases your control for the club number you’re using.

Using backspin and getting a nice shot would improve your backspin ability, as another example. As this carries over online, if you spend a lot of time playing well and increasing the level of your clubs so that they’re more proficient, this puts you at a greater advantage over your competition. After getting some time in, the initial feeling of a game that may seem to drag starts to dissipate as you progress and open up more of the game to enjoy. Everybody’s Golf definitely puts out a solid effort after a three-year hiatus, and lives up to the series’ motto of being a golf game for everyone to enjoy.

Everybody's Golf Gameplay Video
What Is the Future of Golf Games? (Roundtable)