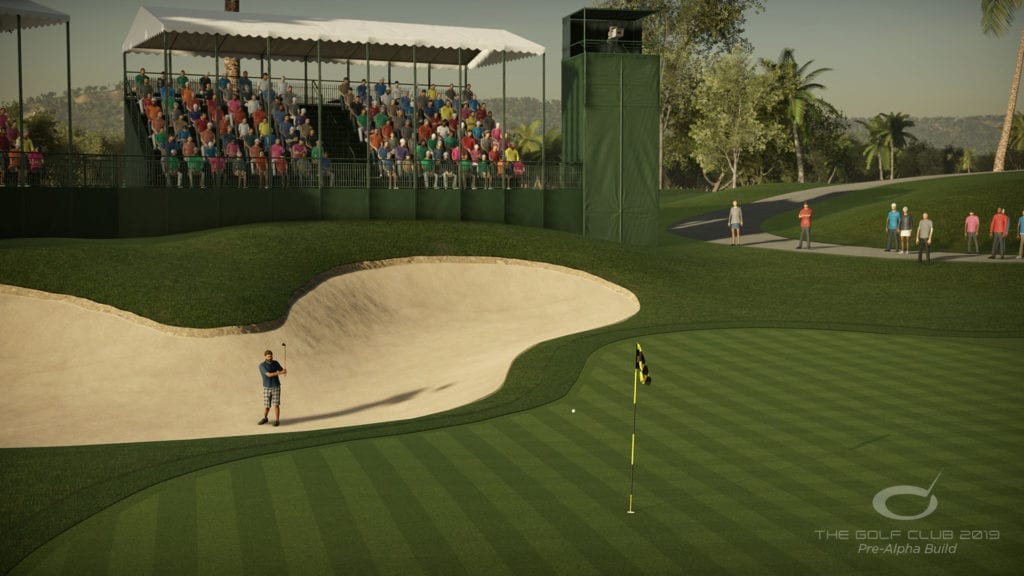 I’ve never really been the biggest fan of golf games but recently picked up The Golf Club 2 on a bit of a lark and was blown away by just how far golf games have come. One of the biggest problems with golf games I’ve played in the past has been just how easy they are once you’ve put in a little bit of time to learn the mechanics, eventually granting you an unrealistic amount of control on your shots.

Not so with The Golf Club 2. It’s a challenging experience that will quickly have you realizing how difficult it can be to just hit a shot straight. Any deviation from pushing the control stick straight down and then back up will see you slicing or hooking the ball left or right, and facing a difficult recovery. But it’s more rewarding rather than frustrating, as you try to replicate any success you have with the clubs and get into a groove.

And the putting! Even though it uses a typical grid of the green to help you adjust your shot accordingly, it’s more intuitive than usual. Golf games have a tendency to turn into math games when calculating for wind, lie, green breaks and a variety of other factors but The Golf Club 2 makes it more of an organic experience accounting for these variables in all of your shots.

But perhaps the best part of The Golf Club 2 is the online societies so you can see how you measure up against other people. There are societies for pretty much every skill level, and if you’re up for a real challenge, you can even join tgctours.com and play in automated cross-platform events where you can be promoted and demoted based on your performance.

Golf is a very curious sport when it comes to video games. A golf game only needs two things to be great: rock-solid gameplay and an enthralling environment. Think about previous elite golf titles through the years, such as NES Golf, Mario Golf, Tiger Woods 2004, and Tiger Woods 2007. All of them still hold up today for those two reasons. Golf does not necessarily need the perennial updates expected from Madden, The Show and 2K. If anything, it is the one sport that could really benefit from a subscription-based model that brings in consistent and seasonal updates. Rainbow Six: Siege could be a great blueprint as it was a strong core game at launch with consistent years now of game-expanding DLC.

With that in mind, current offerings are fairly diverse even with the most recent AAA golf game’s release dating back to July of 2015. Rory McIlroy’s PGA Tour is a much different game after its disastrous feature-stripped launch. The digital version retails for $20 (currently on sale for a whopping $5 on PSN as well as part of EA Access on Xbox One) and feels much more complete for those approaching the game for the first time. The Golf Club 2 is arguably the most sound and feature-rich but lacks any licensed golfers, gear or courses. Golf Story is its own unique RPG experience that actually packs in a fun, arcade-style experience. And, of course, there’s always Neo Turf Masters, the Neo Geo masterpiece from the mid-90s that can be had now — for less than whatever your lunch cost — on both Android and iOS.

EA could certainly stand to release a feature-filled golf behemoth in the next year or so. However, as we have seen with countless microtransaction-plagued releases over the last few years, they will need to do it very carefully to not lose more potential customers to other titles in what is a surprisingly varied golf video game marketplace.

Tiger Woods’ fall from grace was the beginning of the end for licensed golf games. Sure, EA released a game featuring Rory McIlroy but it wasn’t quite the same. The Golf Club and its sequel presented a fairly decent golf sim with the added benefit of a deep course creator, but without real world golfers, it’s lacking a soul. Enter, Everybody’s Golf.

It’s a spiritual successor to the highly successful Hot Shot’s Golf series and it’s everything I’ve wanted and more in a golf game. It has vibrant graphics, deep yet accessible gameplay, and is just tons of fun. It may not be the licensed AAA behemoth that Tiger once was, but it’s the best thing going on the links today.

As someone who purchased every Tiger Woods title available, I would have thought this generation of golf games would be largely disappointing. Instead, I’ve found the opposite: the lack of a AAA golf game has resulted in me experimenting with indie titles. Among my favorites are Powerstar Golf, Golf Story and Everybody’s Golf. When you throw the aforementioned Golf Club on top, this generation has actually been really strong for golf titles.

I miss simulation golf, particularly now when hardware is so ripe for a gorgeous and realistic looking title, but there’s something appealing about the smaller scale of something like Golf Story — which felt like the Caddyshack game I always wanted. There is a ton of really strong humor and it’s perfect to pick up and play for half an hour or so on the Switch. The game seemed to have enough success worthy of a follow up, so I have my fingers crossed for that.