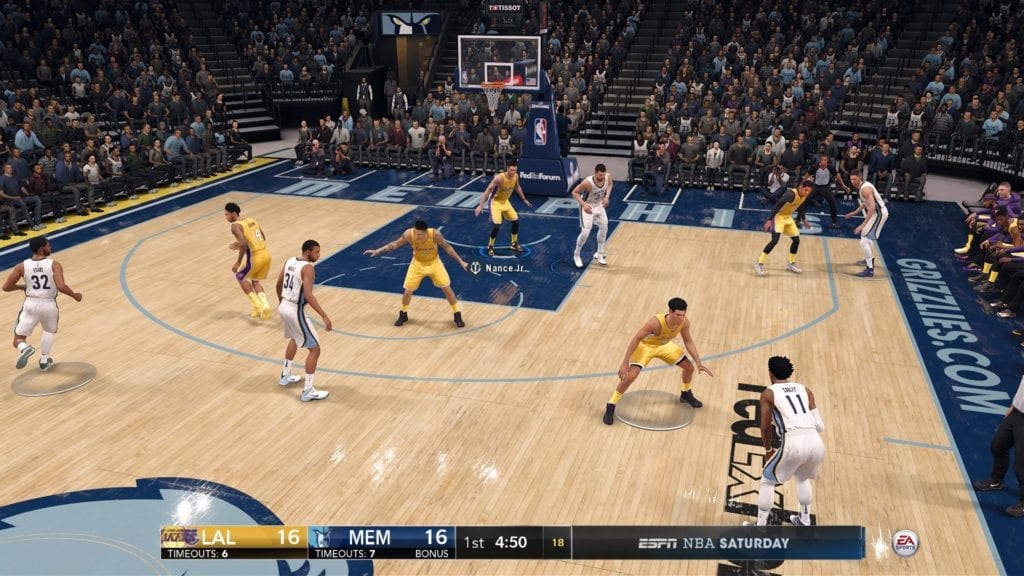 After taking a look at some of the different game modes in NBA Live 18, it’s time to talk about the gameplay itself. After all, engaging game modes don’t do a whole lot of good if the game isn’t fun to play. So that leads us to ask the question: what kind of game is NBA Live 18?

The question isn’t as simple as, “is NBA Live 18 good?” That’s far too broad and is a question for each individual gamer to answer. But rather, what is the gameplay like? Is it fun? Is it an accurate basketball simulation?

Yes, it’s fun. And yes, it’s an accurate basketball simulation. To a point.

Some have gone as far to call NBA Live an arcade experience, but I don’t think that’s accurate. NBA Jam is arcade. This is absolutely a basketball simulation. But in the same way it’s not NBA Jam, it’s also not NBA 2K in terms of replicating the on-court experience.

That doesn’t mean that the game isn’t fun. It absolutely is. And just as there are some game modes that are more fun than others, there are many areas of gameplay that are great, along with many that will frustrate you.

Let’s take a look at a few of the larger areas of gameplay. In my day-one impressions, I wrote positively about dribbling in game, but noted that it doesn’t feel as responsive as I would like. After some more time with the game, the issue I have is not with responsiveness. In fact, it’s not even with dribbling itself. It’s that overall, I don’t feel as in control of my player as I do with, for example, NBA 2K. With that series, player movement feels more closely linked to precise left and right stick movements.

With NBA Live, player movement absolutely follows your stick movements. But it does feel like the CPU steps in on your behalf. For example, you may dribbling above the three-point line and you intend on taking a small step towards the right side of the floor, but you end up taking a few more strides than you bargained for. One way isn’t necessarily better than the other. It’s just that if you’re more accustomed to the 2K style of movement, Live might take some getting used to.

With me, for the first day or two, I had trouble driving through the lane or attempting to switch directions quickly to go around a defender. I’m so used to other basketball games that I was relying too much on using what I know from those games and trying to apply it in an unnatural environment. So as much as having previous basketball game experience will help you here — and trust me, it’ll help a lot — with that experience comes a learning curve.

The good news is that, after nearly a week with the game, I am much better at making those cuts and getting around those same defenders. With the benefit of hindsight, what I once interpreted as a potential issue with the dribbling system now feels more like me getting used to the game. The lesson, as always: practice makes perfect.

Although you do have some limited options in using the right stick to shoot, I found it much easier to use the Square button. You can use the right stick to flick up a jump shot, but you can’t use it to dunk. Using Square makes sense, if for no other reason than consistency. As you rise up to shoot your jumper, you’ll notice a shot meter with a line that starts to rise. The bar is yellow and then green at the tip top. The closer to the top you stop the line, the better your release. Jump shots feel natural and the shot meter works really well here. It’s not very aesthetically pleasing, but it functions just fine.

If you’re driving through the lane, holding down square will initiate a layup. If you’re also holding down turbo (R2), your player will dunk (if he can, of course). If you want to change your shot mid-flight, tap Square again. And given the drive-and-kick nature of the league these days, you’ll find yourself doing this quite often. Driving is fun, but I’m not enjoying plays at the basket nearly as much as jump shots. Going back to my earlier point about not having as much control over your player, far too often I find that what I envision my player doing on his way up towards the rim is different than what he actually does. Even if it doesn’t look right, my only option to change it is to hit Square again in mid-air. I’ve gotten more used to it the more I play, but it can definitely be frustrating.

Speaking of scoring at the basket, let’s talk about post play. You use L2 to enter a back down, and from there you can face up, spin, hop step, and more. Which is great. What’s not great, however, is scoring in the post. I’ve never been a huge fan of using a shot stick in basketball games, with the exceptions of post play. Using only the shoot button leaves you feeling like the CPU is doing all the work.

I think that passes are a little too easy to complete in this year’s Live. Of course, this doesn’t mean you can throw from sideline to sideline repeatedly with no issue, but you can absolutely keep the offense humming along without worrying too much about long-armed defenders deflecting your passes through traffic.

Icon passing is present, but one quirk I don’t care for is that you have to hold R1 down while you hit the player you’re trying to pass to. It would work better if R1 was a toggle. Yes, it’s a small quirk, but try holding down turbo and trying to icon pass to your center (L1). I’m just trying to hit my center, not input a Mortal Kombat fatality.

You can also utilize a bounce pass or a lob pass, depending on the situation at hand, along with double tapping R1 to pass your teammate closest to the basket. All of these options give you more control over your player, which is a good thing. A standard pass will work for almost anything, but an entry bounce pass to your big posting up or a lob over traffic to an open teammate for three will do wonders for your offensive game.

Using the right stick for dribble moves in NBA Live 18 is one of the more polished areas of gameplay, particularly on the offensive side. It feels very fluid and responsive, especially when you compare it to other areas of the game that don’t feel as refined. You can execute a crossover or in-and-out just as you imagine you would. And that’s part of the fun, how natural everything feels. It’s very satisfying to use a quick hesitation before crossing hard left and driving to the hole for a quick scoop. There is a one-on-one system at work here on the perimeter, where your opponent tries to get around you while your goal is to cut him off. If you are slightly off, you will slow them down and engage in a jostle. If you are way off, he will blow right past you. It’s a nice system that works well in practice. If you cut a player off or get him in a jostle, it has a magnetic feel, almost as if you lose control for a brief moment while the animation kicks in

Defense in the post is particularly challenging as it can feel somewhat robotic. And if you’re trying to challenge a guard slashing through the lane and going up for a layup, once he leaves his feet you feel almost powerless to stop him. It’s as if the animation is already in the works and you can’t disrupt it. This isn’t absolute, nor am I suggesting that it’s pointless to leave your feet once the player on offense does, but it’s another knock against the lack of feeling in total control over your team.

Boxing out and rebounding, however, feels right. Players feel a bit more rigid when going up for rebounds, but there is balance here. Boxing out works well, so when you get a good seal on your man, you give yourself a much better chance to grab the rebound.

Computer help defense could use some work, though. If you’re playing on the perimeter and your guy blows past you, your computer teammates tend to stand around as he strolls in for an easy dunk or lay in at a higher rate than they should. I should point out that almost all of my Play Now testing games have been 12-minute quarters with default All-Star sliders. I didn’t talk about tendencies or sliders because we aren’t even a week removed from release day, so I would expect some of these issues to get fixed. Many in the forums are reporting that the mid-range game is either severely lacking or non-existent from CPU opponents, which is accurate. I referenced issues with the ease of passes earlier. There are many examples like this, but I feel like most could be addressed with a good slider set. But that takes many hours of practice time to perfect, and it’s absolutely something we’ll look at down the road.

Live 18 is by no means a perfect game. But it is fun. A lot of fun, actually. There are some big misses that prevent this from being the simulation that it’s aiming to be, but there are more than enough good things here to make for an enjoyable basketball gaming experience. In that respect, NBA Live 18 delivers in a big way.

What about you? Do you feel like NBA Live 18 is more arcade or simulation? What areas of gameplay do you love? What do you think could use some work?  Let us know in the comments!