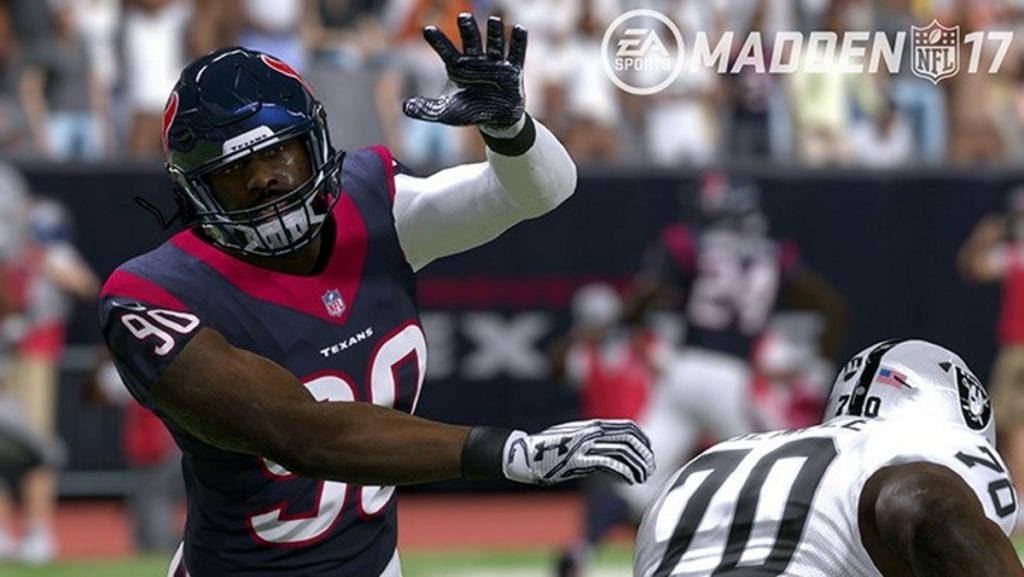 Many football fans purchase Madden year after year with the lofty hopes that the game will mirror the actual sport they love as closely as possible. And while the folks at EA continue to take strides in the right direction in terms of making this dream a reality, there are still a number of areas in which improvements are needed if the game is ever going to measure up to what we see on the field on Sundays (and Mondays and Thursdays and every other day of the week NFL games are now held).

Considering Madden has seen the defense attacking the offensive line with power moves and finesse moves for some time now, the novelty of this engine is definitely starting to wear off at this point and is in serious need of some fine tuning. The fact is that not only does this all-or-nothing proposition not really mimic the way it looks and feels when D-linemen try to burst through the line, it also isn’t really all that much fun.

What’s needed here then is a little more nuance. All you can do now is spam either the power or finesse button, and either it works or it doesn’t. But in real life, every battle in the trenches is an ongoing grudge match that’s not quite as cut and dry as Madden makes it out to be. What would make these interactions much more dynamic is perhaps a combination of buttons (or even a twisting the right analog stick perhaps for a spin move) that must be quickly performed in order to get through a block. These could be more or less difficult based on the skills of the players involved (or whether a double team is in place), and result in partial or full success in accordance with whether or not the combos were performed to completion.

Let’s face it: booth reviews are broken and have been broken for some time. Even if you do notice a play where the refs have ruled incorrectly on something like a completed pass on the sidelines or the spot of a ball and you feel like it’s a challenge you might be able to win, it’s pretty much a waste of a timeout to throw the challenge flag because the game can’t seem to recognize when a mistake has been made and change the ruling on the field. And even on the off chance that you do win a challenge, you may still find that the game can’t recognize that the challenge was won and so the game just reverts back to the original call anyway.

While it would obviously be great if EA could figure out a way to make booth reviews accurately assess whether or not the original call was correct, it may be time we give up any hope of this aspect of the game ever being entirely acceptable and start turning these rulings over to the people.

I mean if these challenges are a mess anyway, let’s get crazy! How great would it be if it were possible to take these challenged plays and have them decided by interested viewers on a dedicated Twitch page or somewhere within Madden itself? Sure, there are obviously technical hurdles to get over in order to make this happen, and yes, there are then almost certain to be trolls committed to making sure the call is never made correctly, but it would definitely add a new measure of excitement and uncertainty to every challenged play for both players and viewers alike.

It must be said that EA seems to work every year on making the physics of the ball, especially when contacted by players, feel more realistic. But unfortunately, it still doesn’t appear as if they have nailed this important component of the game. This is particularly apparent on plays where your receiver has the ball batted out of his hands by a defender, as the ball will then often skyrocket into the air on a trajectory that’s as unpredictable as it is unrealistic. This often leads to more interceptions or a ball bouncing awkwardly off different players, and while these types of plays do happen in games in real life, they occur far more in Madden than you would see in the NFL.

Unfortunately, it’s not as if there’s any quick fix to an issue as complex as this. You would hope that as EA concentrates on replicating the movements of individual players through motion capture and the physics of how a tackler moving full speed in one direction impacts a ball carrier running in another, they would also put in the same kind of effort into accurately tracking how a football moves when its flight is interrupted by hands deflecting it or yanking it away from a would-be receiver. Furthermore, it would be nice to start seeing more balls that are bobbled by receivers before they gain full possession.

Every year in Madden we watch in horror as throws into the flat become an increasingly frustrating game of beating the clock. You try to get the ball out of the quarterback’s hands as quick as possible or risk having a receiver’s momentum carry him out of bounds after the catch. Of course, this can be avoided if you can hold off long enough for the receiver to stop along the sideline where he will patiently wait for the ball to be thrown to him, but it shouldn’t have to be this way. It’s pretty rare that you would ever see a receiver in the NFL catch a ball and then just lumber his way out of bounds without trying to turn it up-field and try to gain more yards, especially when a crucial first down may be at stake.

It should be entirely possible to have the game’s controls be responsive enough that a receiver can turn to look for more yards as soon as he has caught the ball. In fact, you’d think the game could be programmed to have receivers in the flat instinctively know how close they are to the sidelines and make it easier to have them slow their momentum and pivot up-field to pick up that first down. This becomes an even more important gameplay adjustment when considering how effective and frequently used Cover 3 is in Madden 17, which often leaves the defense vulnerable in the flat. However, they aren’t quite as vulnerable as they would be if users weren’t able to rely on the receivers’ momentum carrying them out of bounds on their own and making it possible for the defense to get a stop without even really doing anything.

Fumbles are a part of football, and though they are often beyond your own control and just need to be accepted as a regular occurrence if the game is going to be true to life, it would be nice to see fumbles pursued and recovered by players in a manner that in any way resembled reality. While most fumbles in the NFL tend to lead to a clean scoop by a defensive player or a pile-up where it’s hard to determine who actually recovered the ball first, the ones in Madden are more likely to end in a bunch of incompetent players making a half-hearted attempt to pick up the ball, only to then lie down right beside it and have it picked up by someone else (eventually). It shouldn’t even matter that it’s a lineman trying to pick up the ball — these are professional football players who have better ball skills than that.

Some things in football are simply out of your control, as mistakes happen and emotions will often get the best of players. This is why if Madden hopes to emulate life on the gridiron, there need to be events that go beyond anything for which you could have possibly planned (like questionable game management by a head coach, or Julian Edelman and Julio Jones being freaks). Some of this is already apparent with every rare holding or facemask penalty that gets called, but this should really only be the tip of the iceberg.

Since there’s an increased emphasis in football these days on blows to the head, it might be nice to see defensive backs flagged for head-hunting a wide receiver or a defensive lineman penalized for hitting a quarterback in the head. And while we’re on the subject, there aren’t nearly enough concussion injuries in the game to mimic what’s happening on a regular basis in real football. Or, what if players were assigned some sort of Short Fuse rating that could lead to them melting down in the middle of the game and getting an unsportsmanlike conduct penalty in the midst of a crucial drive?

If we really wanted the game to be supremely realistic, we might even want to include the occasional bad or fumbled snap that could happen at any moment to throw a wrench into your plans. Remember how Russell Wilson had his foot stepped on by one of his offensive lineman in the playoffs this year, resulting in an unfortunate safety when he tumbled backwards into his own end zone? Let’s put that in the game too and really strive for realism.

Granted, these last couple ideas may be a little too much reality for some players that don’t like having things happen that can’t be traced back to something they did on their own, but they are important to consider when asking ourselves just how much of a simulation we are really looking for in our sports video games.

Madden NFL 18 on the Frostbite Engine: Our Reactions
Madden NFL 18 Gameplay Changes - What Do You Want to See?