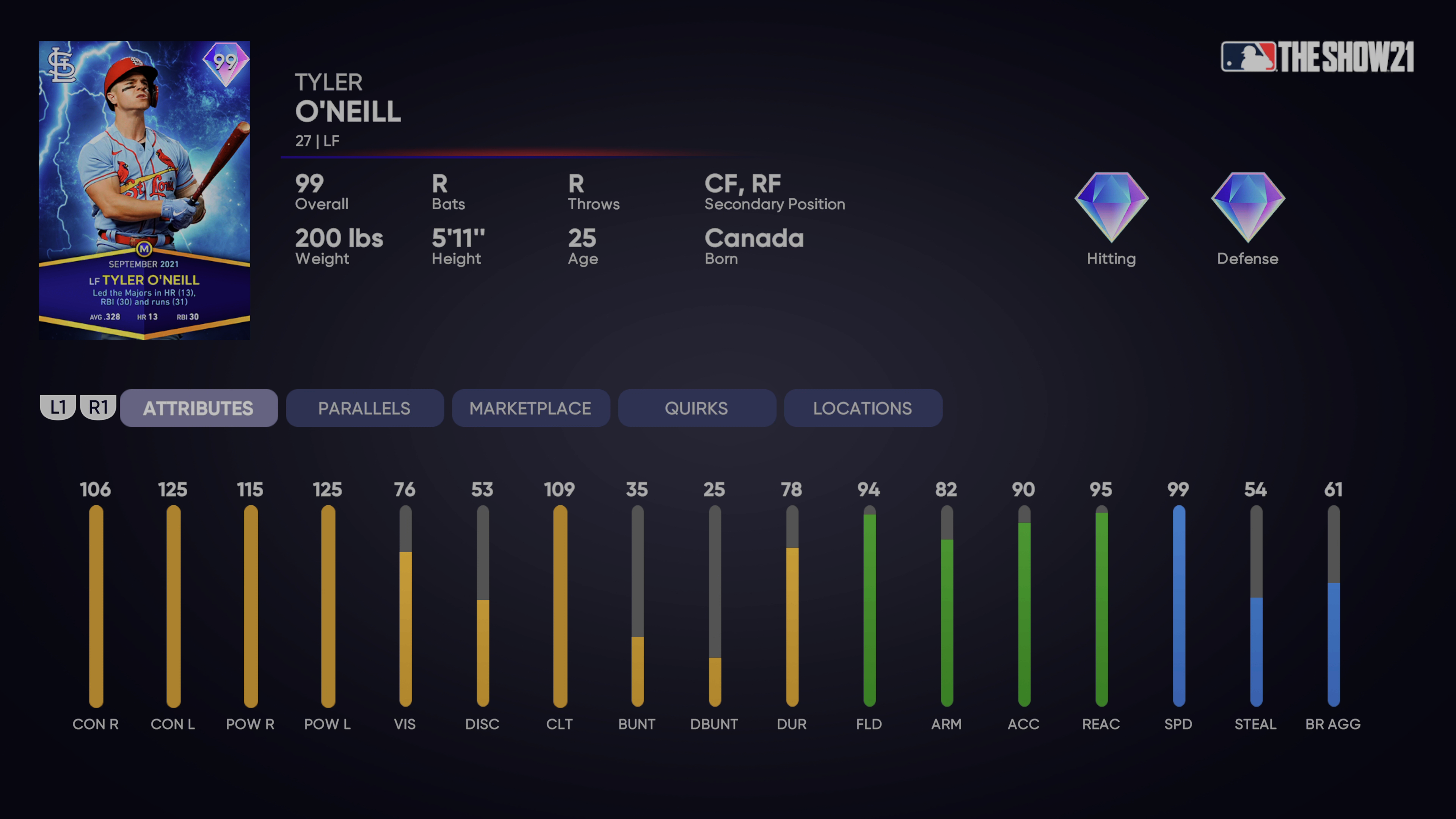 Now let’s put a bow on the Monthly Awards program by talking about these cards, and then start dreaming about the Postseason and Finest cards that will be in our future. 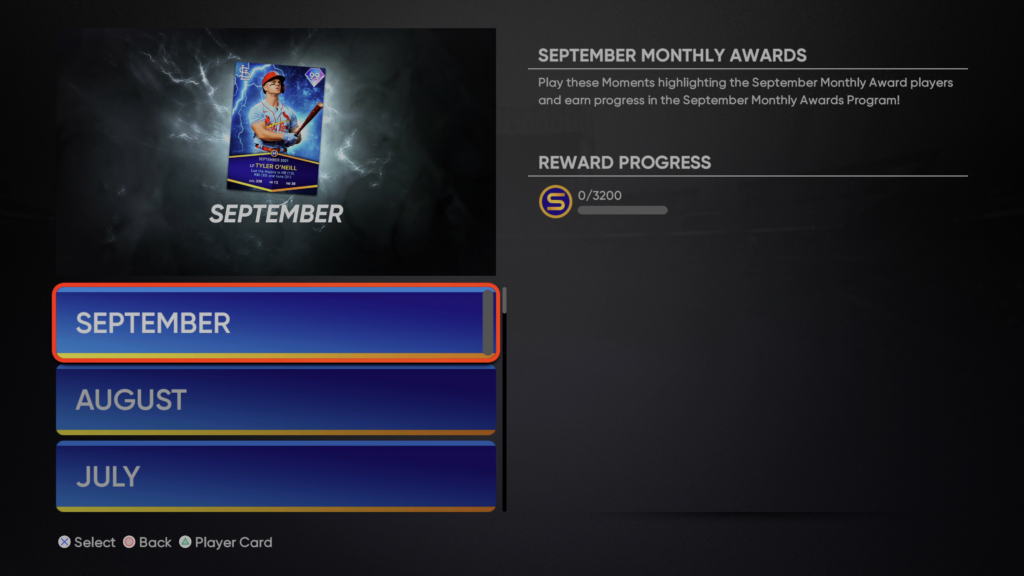 There are nine moments, and each one is worth 4 points for a total of 36 points. 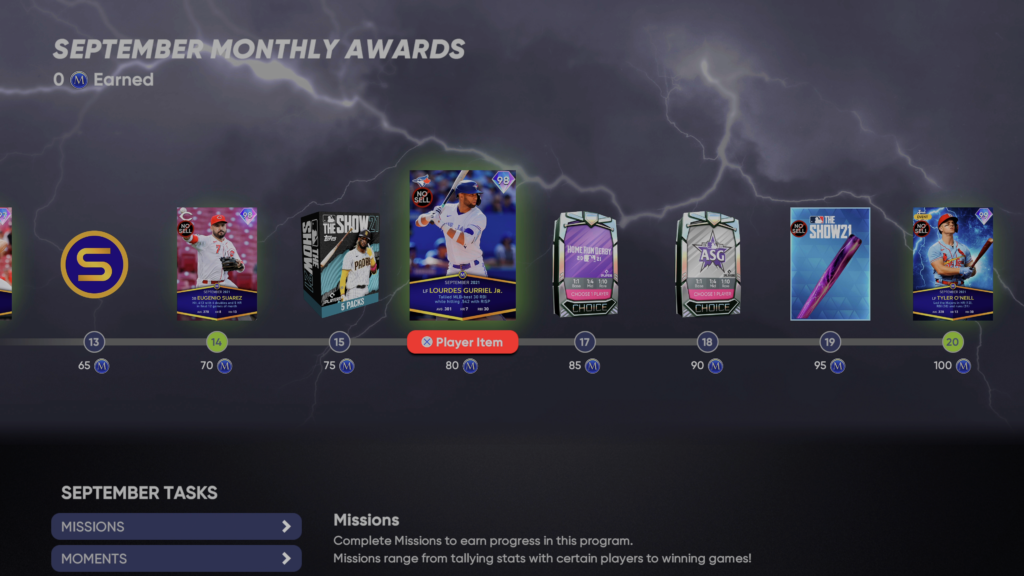 This month’s program is full of NL Central players, and we kick it off with a RHP who has a five-pitch mix out of the bullpen. Alzolay is unique because he has 53 stamina and a primary slider, so he’s a fun little card to have around if you just don’t have much faith in your starters and would rather do a bullpen game. He has 101 H/9 and a sinker and cutter to squeeze in there with a changeup. The velocity is not dominating, but he has 90+ control on every single pitch, including 99 control of his sinker. I have some hope for this card out of the pen when factoring all of that into account.

Another reliever pops in here, but Doval is more the traditional reliever you expect. He has 99 mph velocity on his 4-seam fastball (but no outlier), and his primary pitch is a slider mixed in with a cutter. He has 125 H/9 and there is enough difference between his cutter and 4-seam speeds to make them solid offerings. He has 90+ control of his slider and 4-seam fastball as well. All in all, this looks like another promising RHP to test out.

Our first hitter is outfielder Austin Hays. He has 114 power vs. RHP. He is a relatively standard all-around diamond OFer at this point. He has 70 speed to go with very good all-around hitting and fielding stats, so he’s perfectly serviceable but just not very impressive for this point in the cycle.

Our old friend Ian Happ is back, and he provides some of the unique benefits he always does when he gets a card. He is a switch hitter, and he can play all three outfield positions plus 2B/3B. He has a 74 arm and 61 speed, so he’s not great there, but he has 125 power vs. RHP to help smooth things out at the dish.

I was hoping we might get a Ranger Suarez card just because it would be a fresh face. He is a LHP with a primary sinker and 102 H/9. That’s always a solid starting point this year, and while he only has a four-pitch mix, he does boast 90+ control of all four of those pitches. I’m not sure how dominant he will be, but I’ll for sure give him a shot.

I feel like there have been 100 Reds players in these programs this year, and this is the first of two more. Lucas Sims is another reliever (good to have a bunch of them in this program since it’s always the portion of DD with the fewest options), and he starts out with 108 H/9. He has a 95 mph 4-seam fastball to go with a low-80s curveball and mid-80s slider. He has 90+ control of those three pitches, and then 75 control of the changeup.

We get two Eugenio Suarez cards in quick succession, and this one is flat out better than the 2nd Half Heroes one in the Run It Back Program. He has 125 contact vs. RHP, 90 arm, can play 3B/SS/1B, and he has 120 power vs. RHP. Plus, he has that same stance and swing that so many seem to love.

We get one last Gurriel Jr. card, and he as usual gets max contact vs. LHP. The perk as always of a Gurriel Jr. card is he has eligibility in LF/RF/2B/3B/SS. I feel like you should know by now whether you like Gurriel Jr. or not since he’s been a mainstay in DD throughout the cycle, so this one is up to you.

And the final regular season card is Lightning Tyler O’Neill. He has 125 contact vs. LHP, 115 power vs. RHP, and 125 power vs. LHP. He has 94 fielding, 95 reaction, and 99 speed. He “only” has 76 vision as the one downside, and his arm strength is only 82 if we’re looking for any other things that are not the elite of the elite. Still, this is quite a card and quite a topper to a program that has given us a lot of dominant players this year.