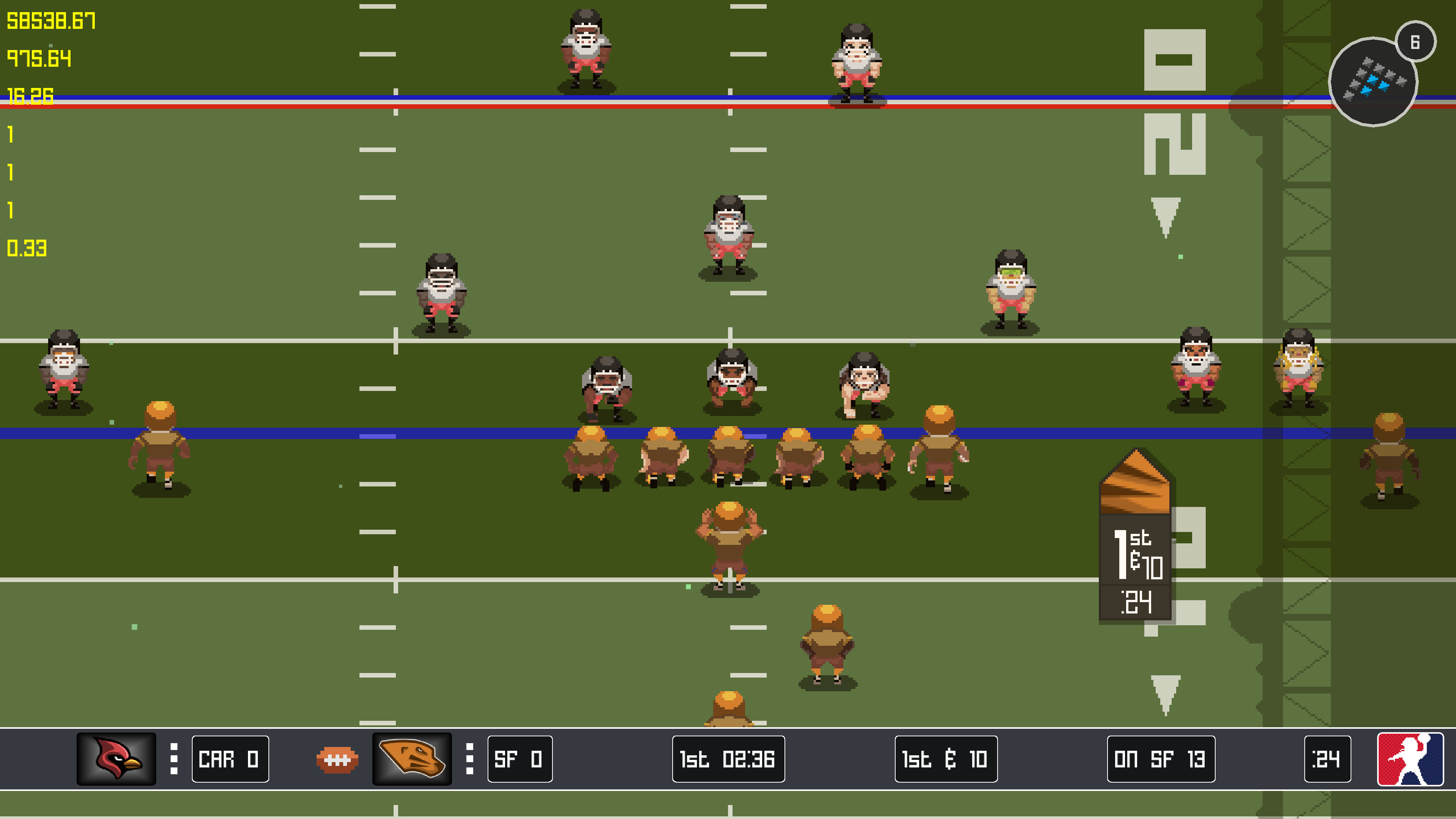 It’s almost that time of year again. The time where I get to live out my digital gridiron dreams on the big screen. This year feels a little bit different though as fans (myself included) have a wide variety of indie football games to choose between in 2020.

Set to drop this year is of course Madden 21, along with the return of Doug Flutie’s Maximum Football 2020 and Axis Football 2020. We also have some newcomers in Legend Bowl and Sunday Rivals. Each developer has their own vision of what digital football should look like, play like, and feel like and that’s never been more evident than this year.

Recently, I had a chance to take part in a private beta for three of the games on this list. The developers of Sunday Rivals, Axis Football 2020 and Legend Bowl all provided me with an early copy of the game, so let’s go through my thoughts on all three games currently still in beta. 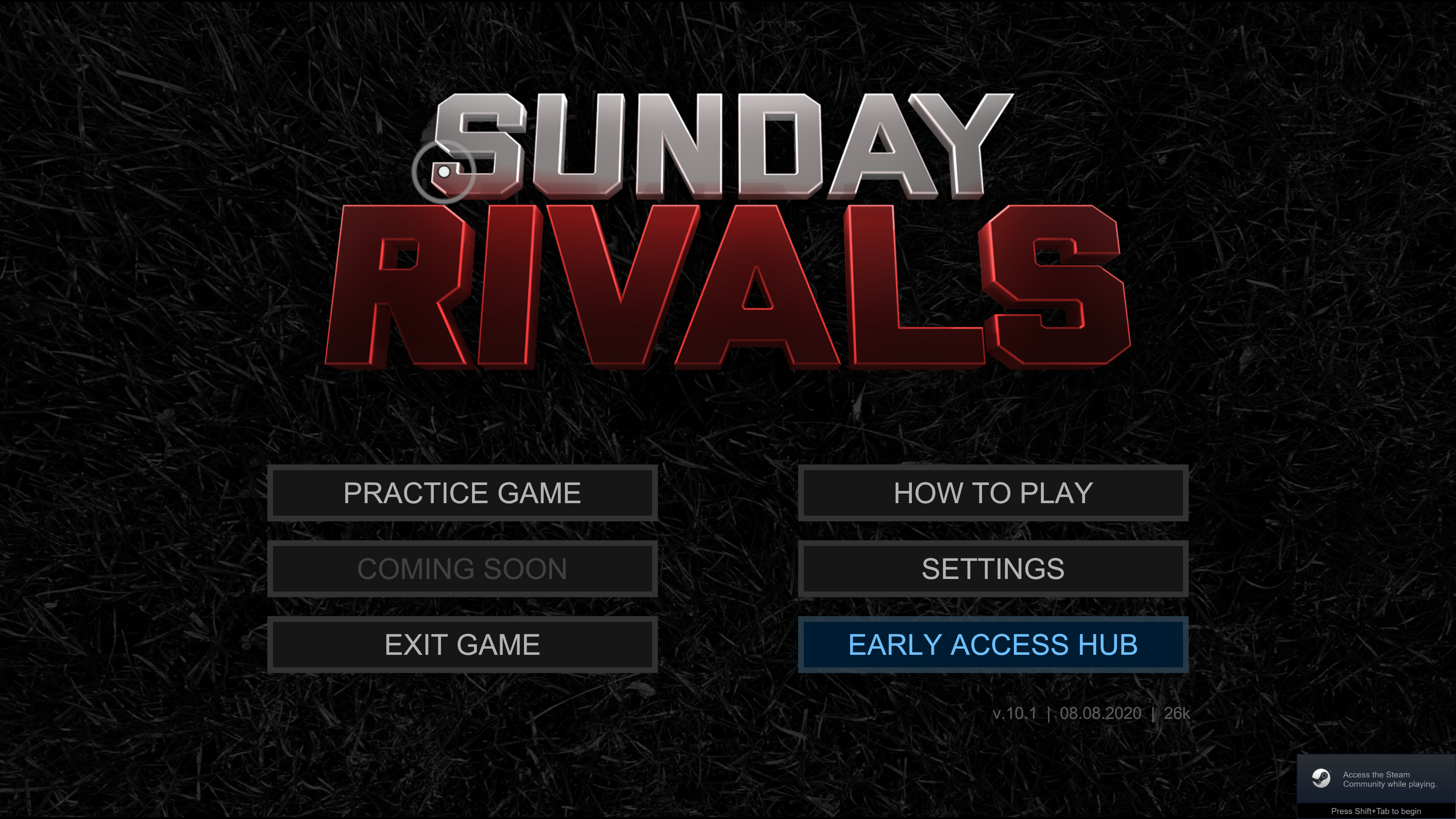 “Sunday Rivals is a fresh take on the hard-hitting, action-packed football games of the past. On the field, the gameplay is tuned to be snappy and fun, rewarding quick thinking and creative players with dazzling open field jukes and bone-crushing hits. Simplified rules, familiar controls, and a streamlined playbook make it easy for players of all skill levels to immediately jump in and have fun, while quick, addictive game sessions will keep you coming back for more.”

After logging some hours with Sunday Rivals, I can safely say that the game offers a unique arcade experience with a solid game of football underneath the blocky, cartoonish graphics. When OS last checked out the game, Josh scoped it out in the prototype stage. Now, the game is further along, and what is refreshing is that the game caters to players with both a strong knowledge of the real-life game and people who are just looking for a fun gaming experience.

At its core, it is an over-the-top, hard-hitting, retro-looking throwback football game that allows gamers from all skill levels to sit down and just have some fun. 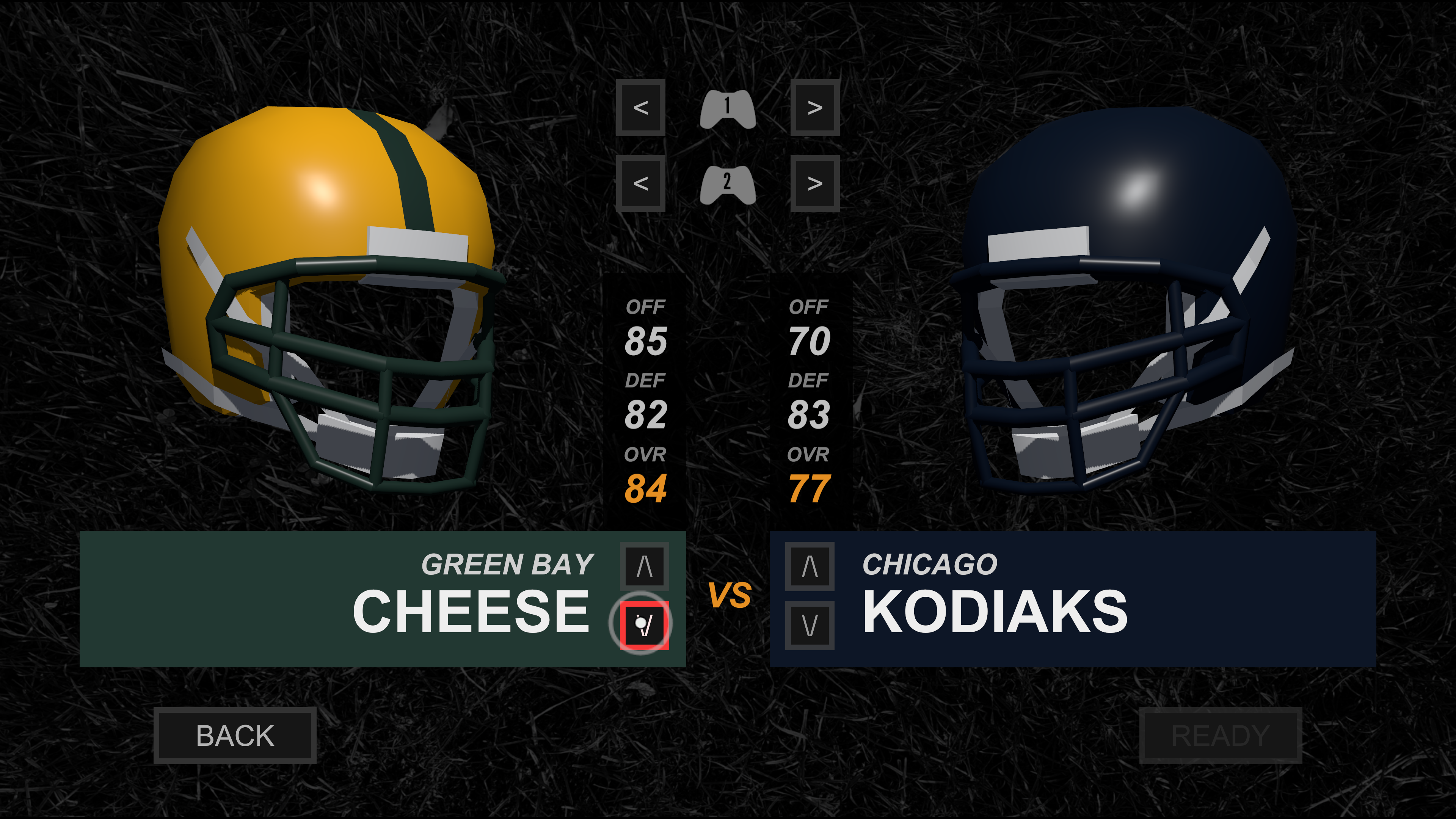 Fun is exactly what I had during my time with the game. The graphics were super clean and sharp, and the gameplay was a very nice mix of arcade-style gameplay with enough real football taking place for even some sim-heads to find the enjoyment in it. The player movement felt very responsive, and while it’s labeled as an arcade title, I found myself having to read my blockers and go through my QB progressions in order to be consistently successful. 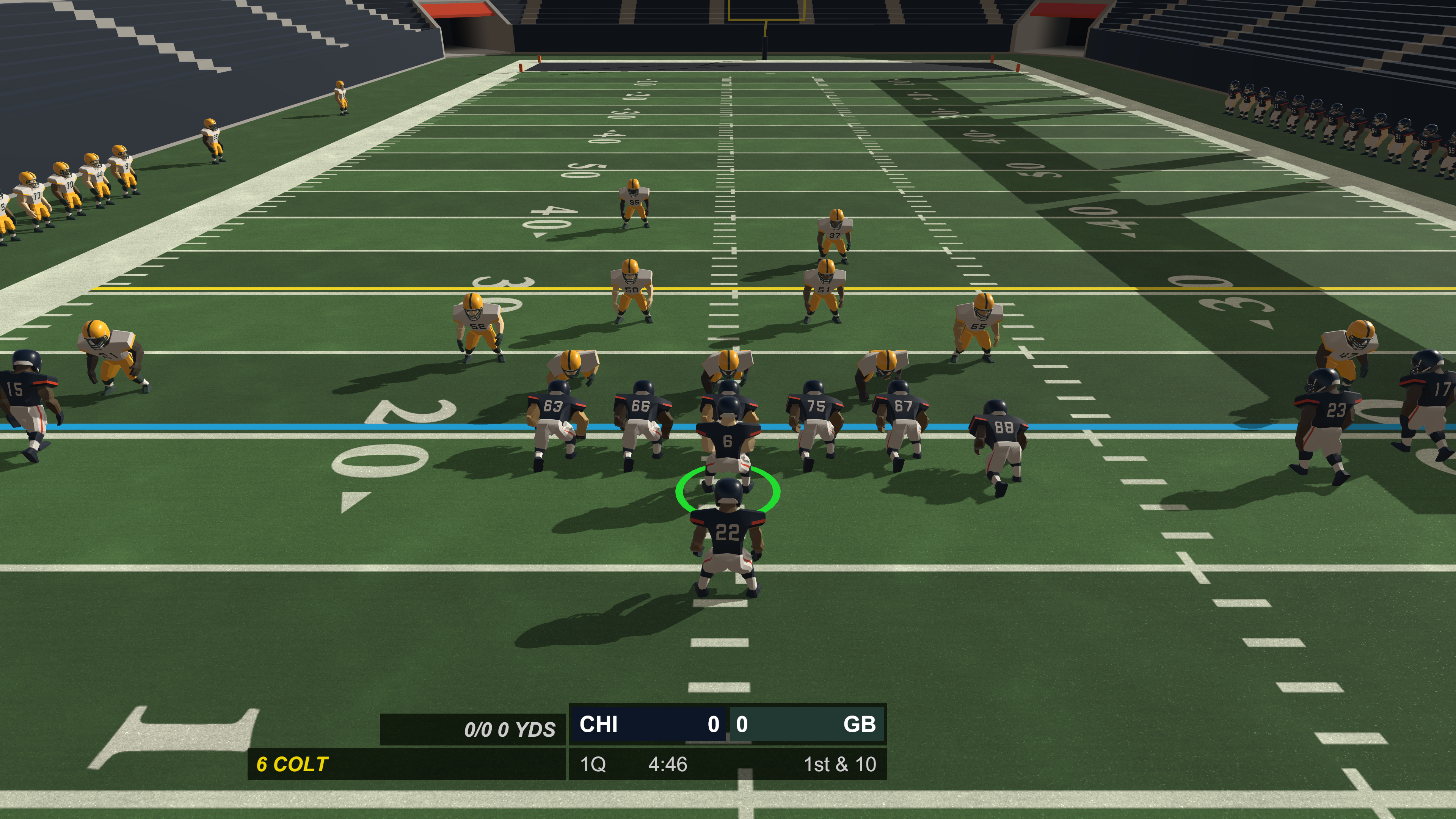 Although not an NFL licensed game, all teams were accurately named after the city that they represent, and the wonderfully modeled stadiums displayed the true colors of each team.

The game is now in early access on Steam, but basic exhibition one-off games are all that’s available for now. However, the developer promises a season mode with the ability to edit teams and rosters. The plans for other platform releases are being discussed, but nothing is set in stone as of right now. 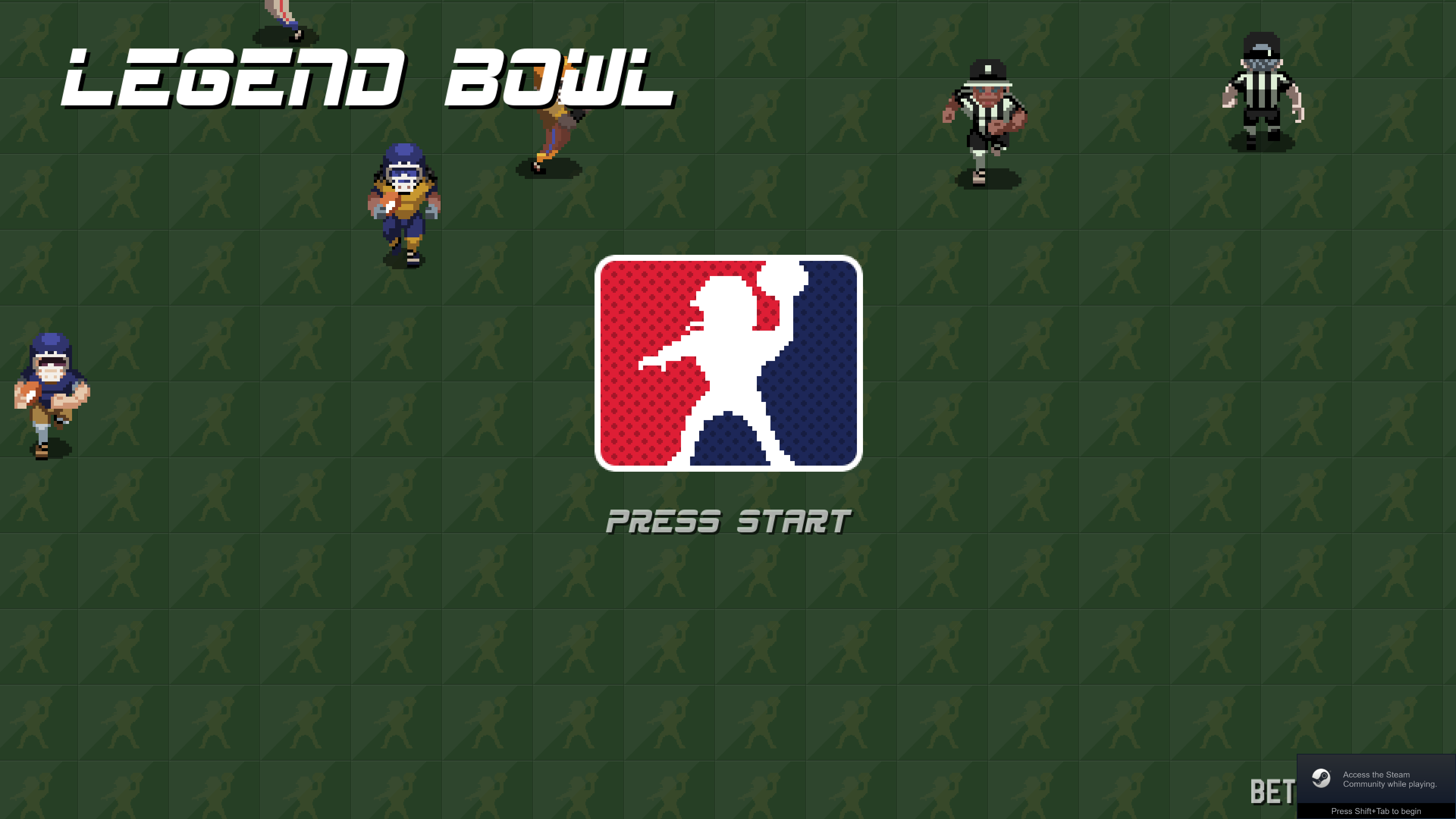 “Legend Bowl brings you back to the glory days of pixel style football games of the past! Enjoy a hybrid of arcade-style football and simulation aspects on and off the field. Fully customize players and teams to create an endless amount of variety in your league. Sim-based controls with challenging gameplay mechanics bring the fight to your doorstep! Legend Bowl includes Tournament Mode, Challenge Mode, Scrimmage Mode, Training Camp Mode, and Customization Modes.” 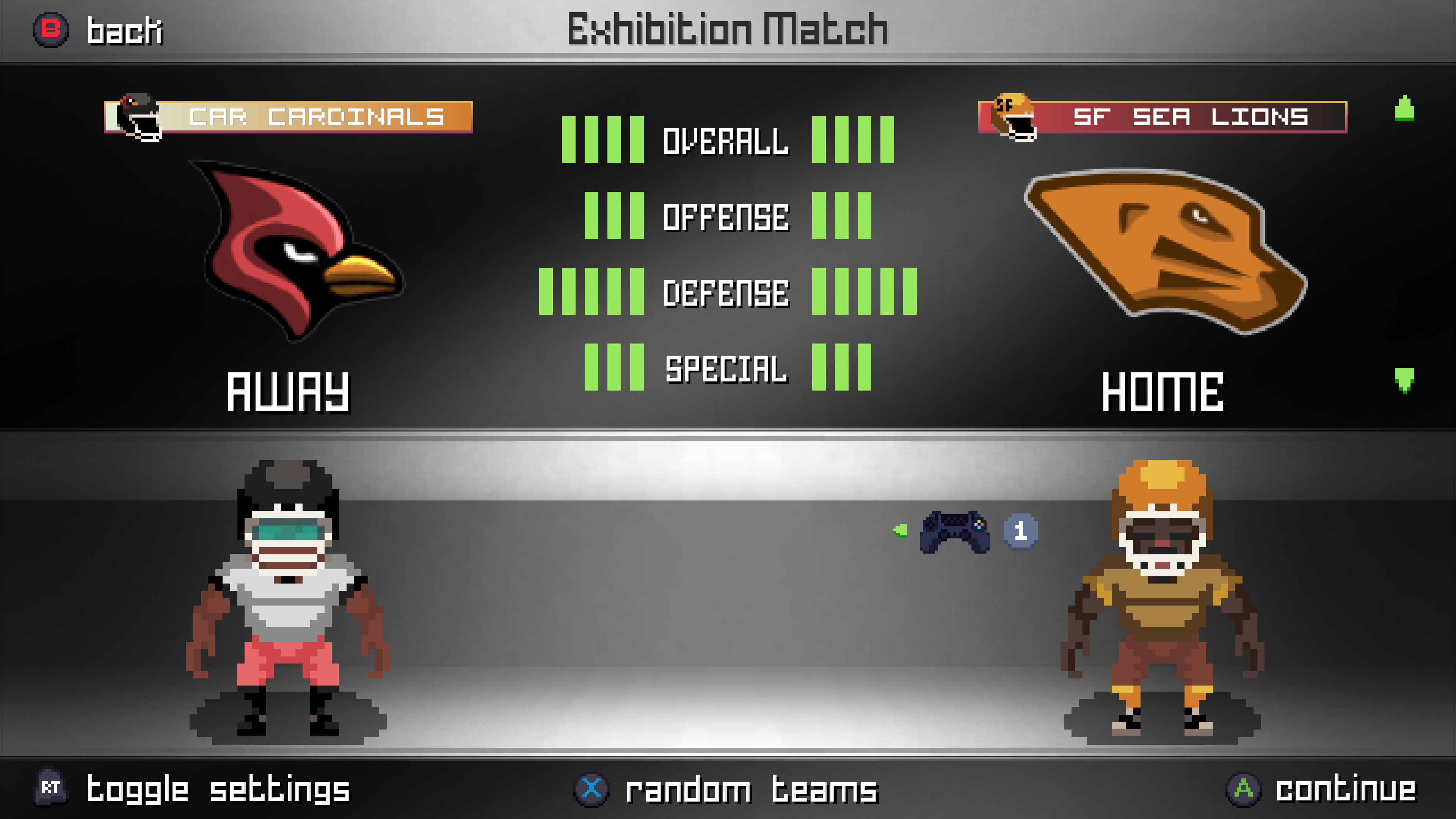 If you were ever a fan of Tecmo Bowl or 10-Yard Fight, Legend Bowl might be just the game for you. The game looks and plays just like an old throwback from the NES or Sega Master System days, but with upgraded controls and new options that play more into the current-gen style.

The more I played, the more I enjoyed Legend Bowl because it offered up a quick, smash-mouth style of football. I witnessed helmets popping off, blood splattering and bone-jarring hits that would cause a suspension in today’s NFL game. The controls were simple to figure out and the game provides an easy to learn and remember gameplay style.

As with Sunday Rivals, while Legend Bowl is a total arcade experience and accessible to the masses, there is a solid game of football that is being played underneath the cute masses of pixels. Once again, I had to read my blocks to have a consistent running game, and going through my progression while feeling the heat delivered an unexpected level of realism to the game.

There is also a bevy of small details that I noticed instantly, like referees interacting with objects on the field, chain gangs moving with each new down, and camera crews on the field.

Once out of beta, Legend Bowl promises a nice set of customization options that will allow players to create their favorite league with their favorite players. Legend Bowl is set for PC with hopes of Xbox, PS4 and hopefully a Nintendo Switch release as well. I am not sure if Legend Bowl is still accepting potential beta testers, but if they are the best way to try and get into the beta is still via Discord. 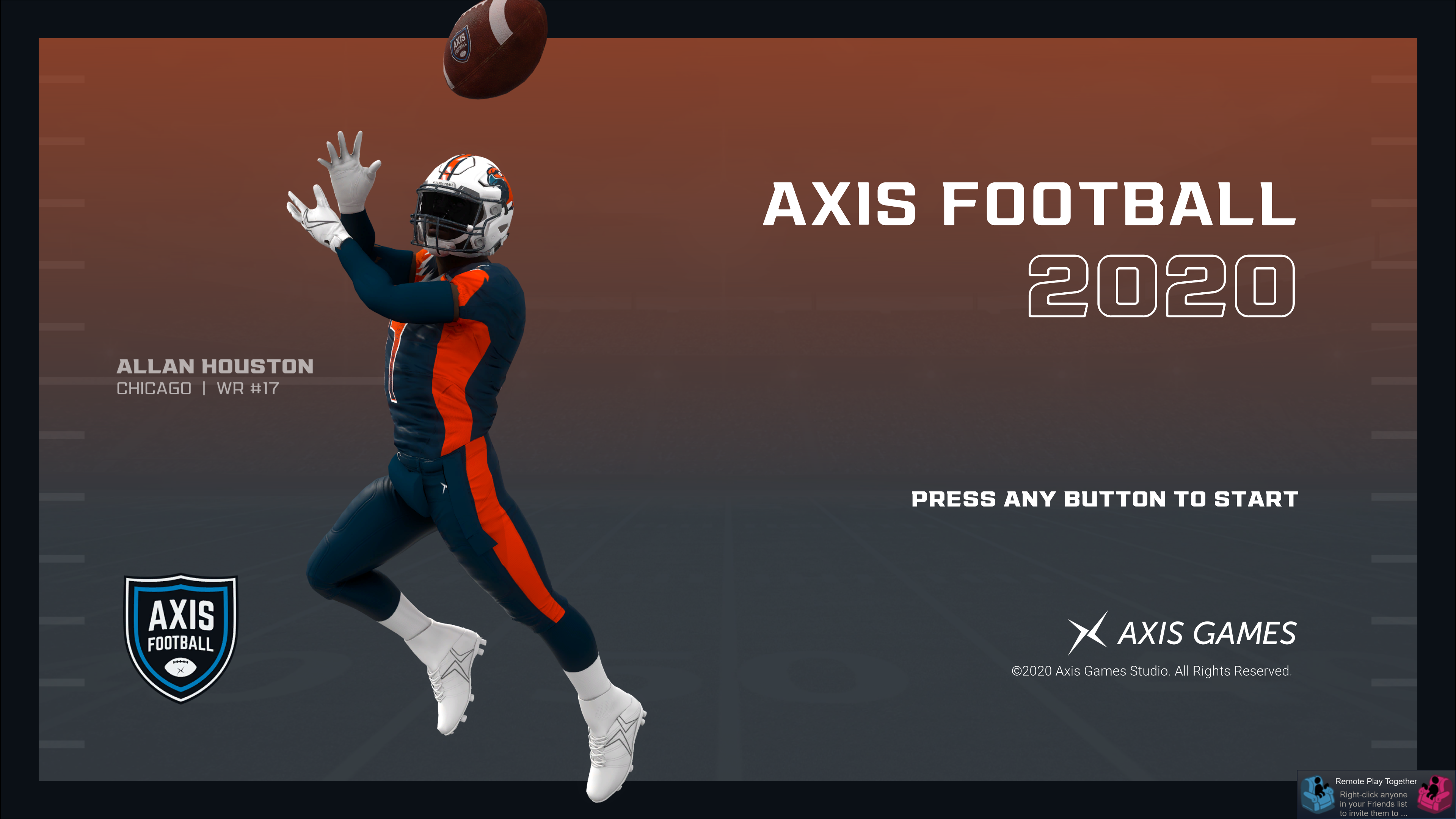 There is no store page yet for Axis Football 2020, but the developers have released information about the upcoming release during the last couple months. Some of the new inclusions with Axis Football 2020 will be new franchise setup options, a deeper scouting experience and retooled gameplay on the field. If you want to get access to the beta, one way to do so is by becoming a patron on Patreon.

Looking to play some football this weekend? 🏈🎮

Become a beta tester for Axis Football 2020! Go to the link below and become a patron to receive beta access!

*Beta is available for PC only.

With a handful of games finished, I was pleasantly surprised by how much improvement I did see on the field. What this means is that the players moved more fluidly, the animations linked together better, and the overall play of each team looked more natural while in motion. One huge improvement for me was seeing receivers run in stride to make catches to keep their momentum moving forward. While that may seem odd to point out in 2020, trust me when I say it was a point of concern with Axis ’19. 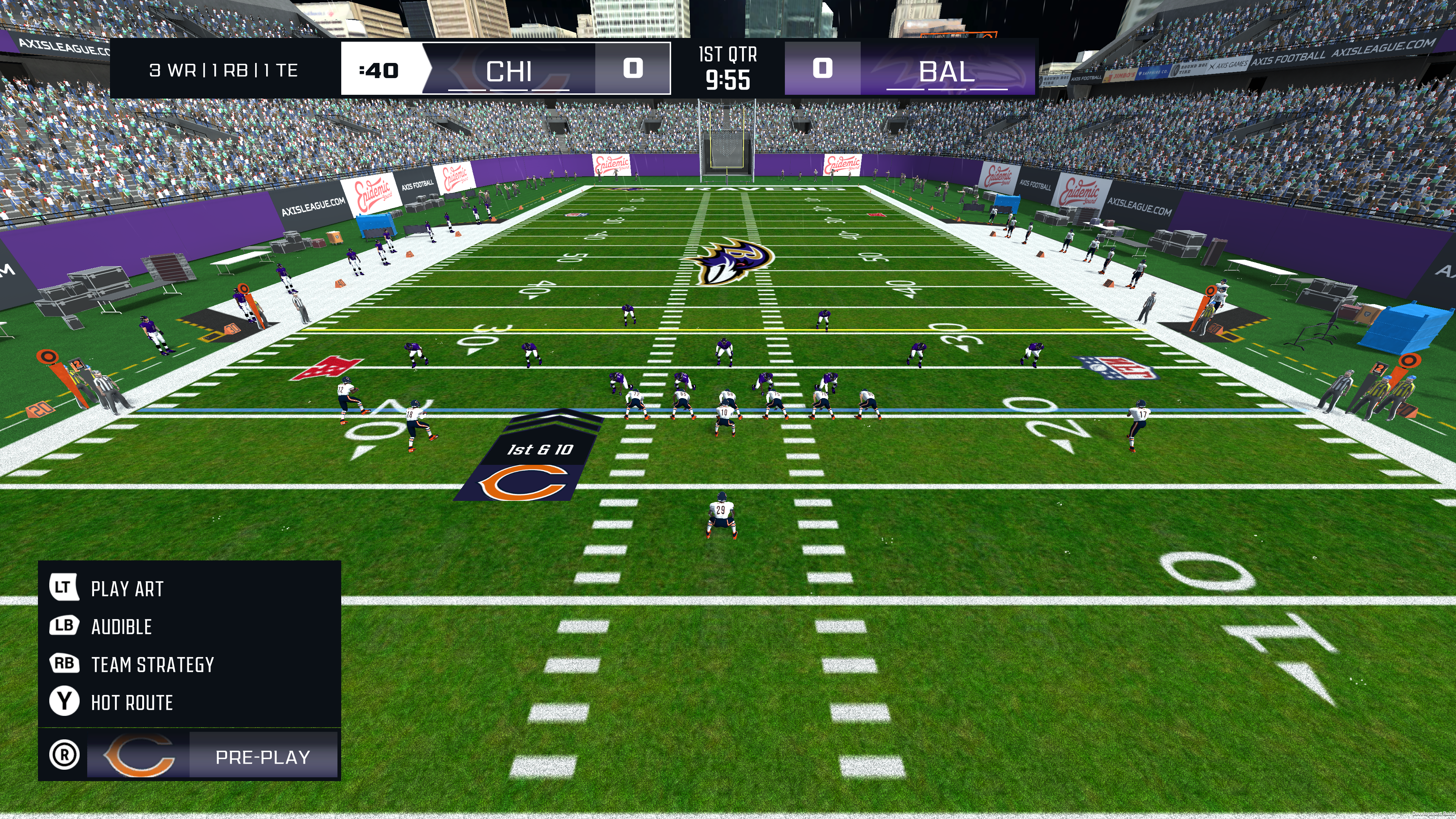 Axis Football 2020 is geared more towards people who are looking for alternatives to the Madden series, and free community mods will become available after launch that will replicate the NFL. The game includes the previously mentioned franchise mode, with scouting, a draft, a salary cap and carryover statistical data from year to year.

The community in the past has also provided an NCAA mod, an XFL mod, and even a CFL mod for those who are interested. The developers encourage all types of modding and creativity, so if that is up your alley, this may be the game for you. 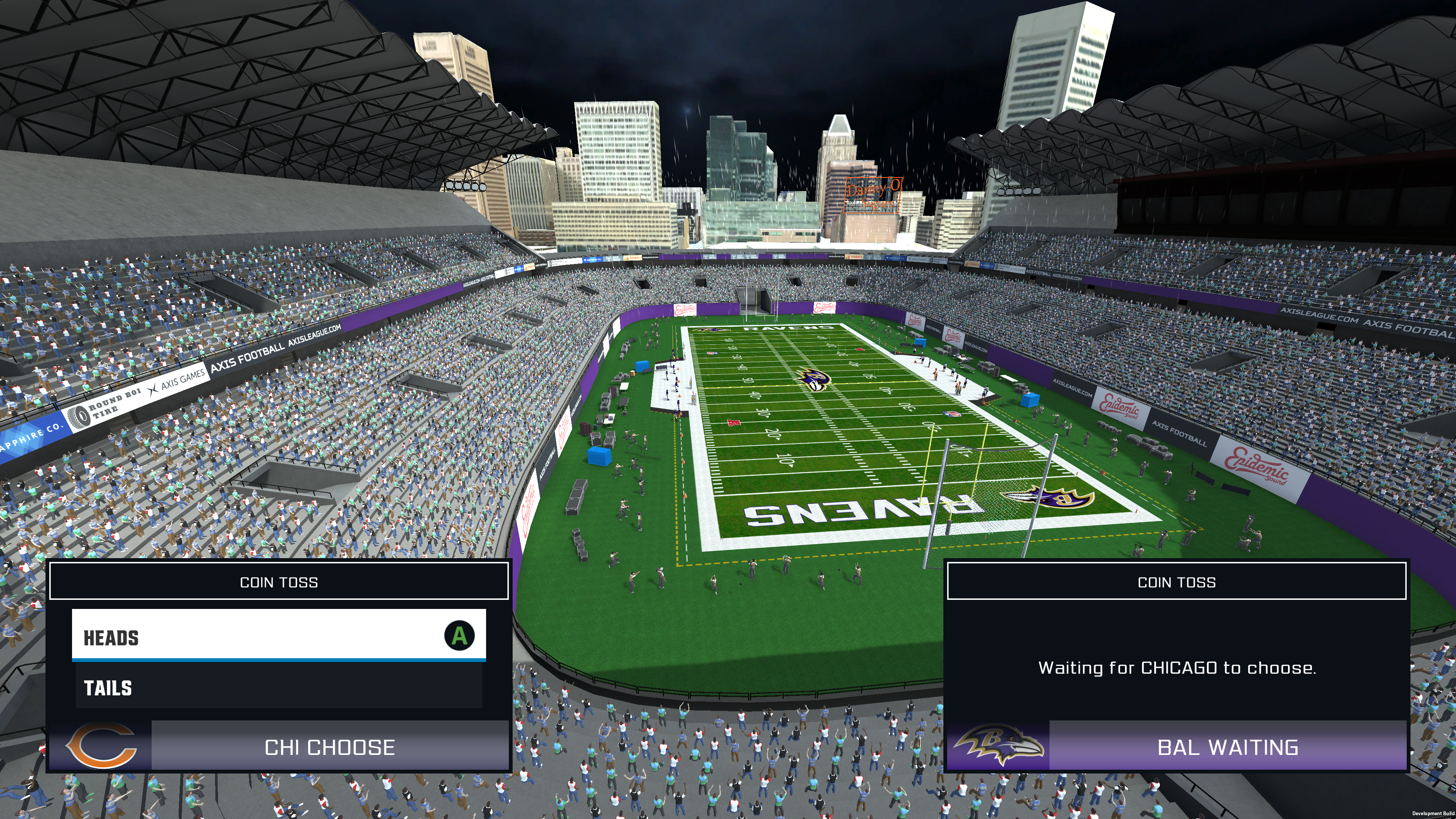 I had a good time with Axis Football, and the improvements from ’19 are tangible. I am even more excited to see where this game will be in a couple of years, but ’20 is a game that should not be overlooked.

As of now, Axis Football 2020 is slated to drop on PC and Xbox, and a PS4 release is still highly questionable at this stage — but that may change as nothing is absolute.

All three of these games provide a different type of fun, and even though the sport is the same, the approach is different enough to make all three titles feel like something different and unique. In an era where sports exclusives are seemingly the norm, the indie non-licensed approach is the best way for developers to pursue a sport that is otherwise locked down by license exclusivity. It’s also the best path for fans of the sport who might be looking for something other than Madden 2020 to add to their library — or something that supplements Madden 2020.

As I previously mentioned, these three games are all in various form beta as of now, and I’m sure obvious improvements and additions will be added as the release date for each title moves closer. We will have full reviews of each game here on Operation Sports as soon as the final version of each title is made readily available.

I will also be doing a preview of Doug Flutie’s Maximum Football 2020 later this week. If you want to keep an eye on these games on Twitter, all three games do a wonderful job of putting out up-to-date details on their Twitter feed almost daily.