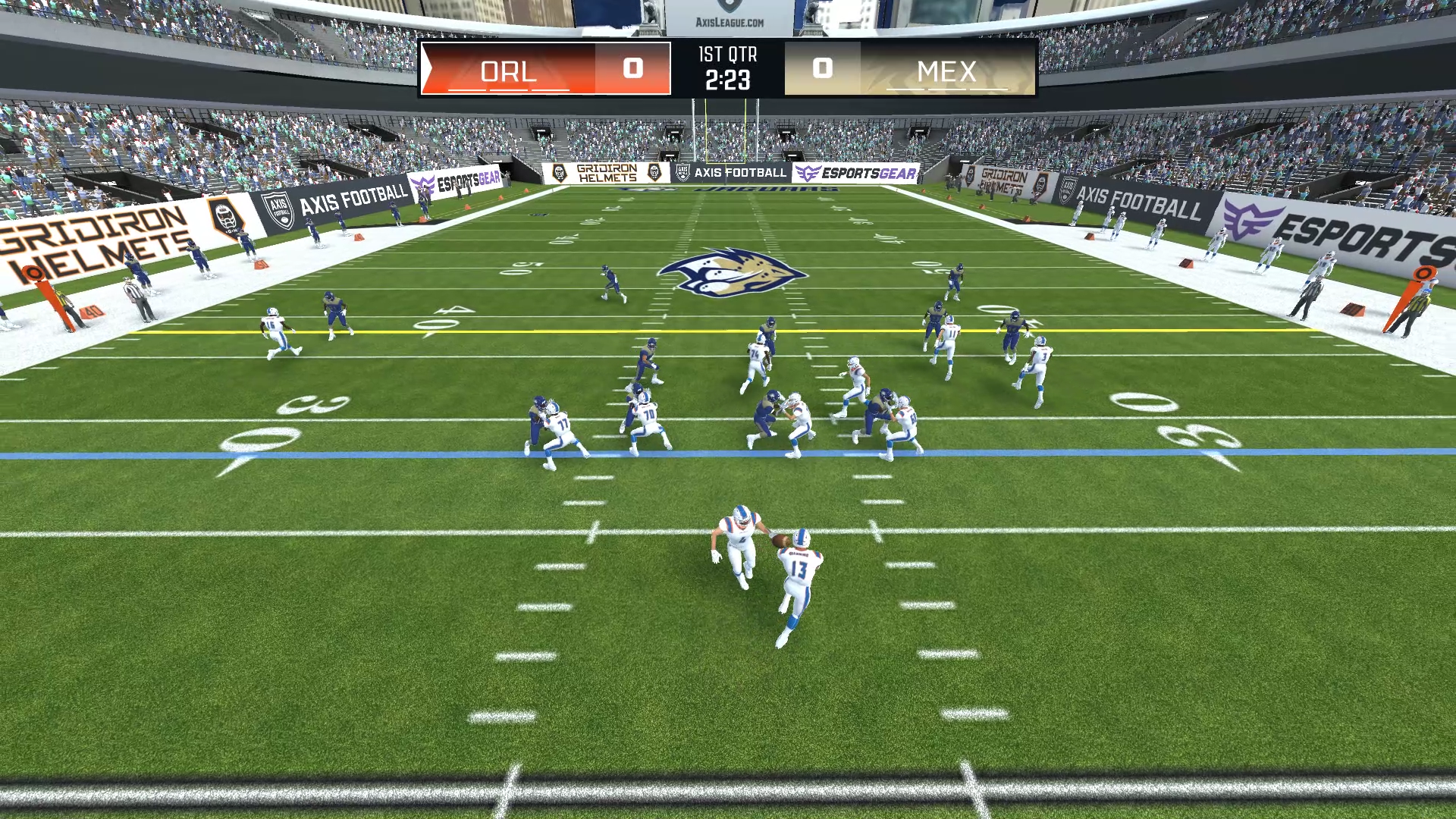 A few years ago, there was a void in the football gaming space. Madden ruled with an iron fist, and if you did not like it then you were out of luck. However, some passionate football gaming developers decided this space needed to be filled. A small company named Axis Games, led by owner Danny Jugan, decided it would invade this space and give gamers another football experience to be had.

The first edition of Axis Football was released in 2015. It was praised for being a Madden alternative, but it didn’t quite have the gameplay to be any type of contender. Years passed, and Axis kept going. Every iteration got better and more customization was added. The game shifted its focus to something that had deep customization and a deep franchise mode. While the gameplay was still important for the developers, they knew their audience. Madden has been panned for years when it comes to its franchise mode. In fact, if you ask a Madden fan, or just a football game fan in general, the last Madden where franchise was actually good would probably be Madden 12 for many folks. When an independent game studio is making a franchise mode just as good — and probably better — it’s not a good look for Madden.

Getting away from the Madden comparisons, Axis Football 2020 is garnering a substantial following so far because it is easily the best iteration in the series. The fact that it keeps getting better, and showing tangible improvement every year, is fantastic for the fans who want an alternative — or even just fans who want a change of pace here and there. With that in mind, let’s get to my Axis Football 2020 review. 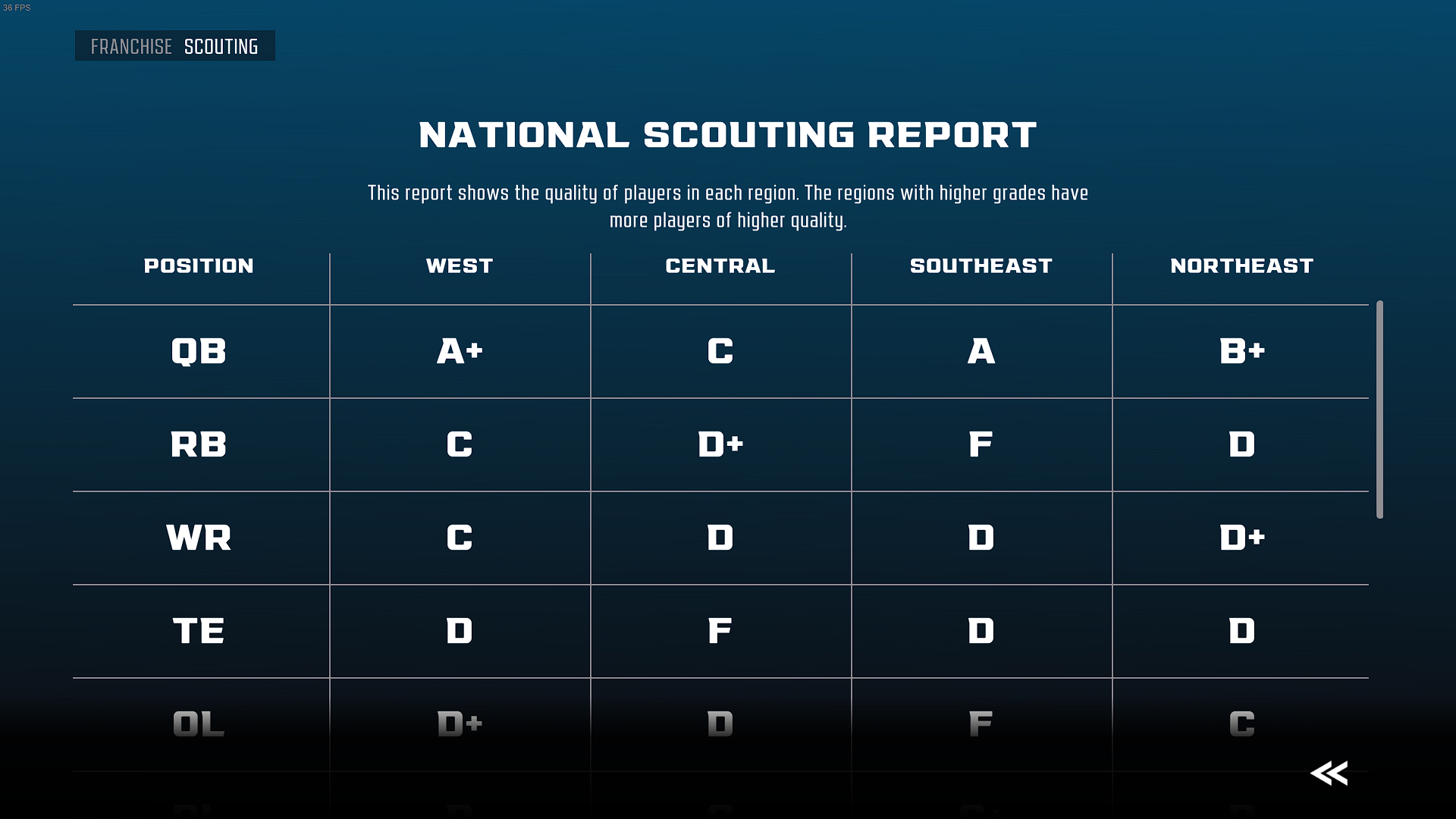 One of the best parts of Axis Football 2020 is how deep the franchise made gets, and the customization on top of it. In franchise mode, every basic thing you would expect is there. But what makes it deep is the way you manage your team. The fact that you have offensive coordinators and defensive coordinators is something on its own that helps it stand on its own. And that’s not all. You also have assistant coaches for every position group. They can earn “badges” that have a direct impact on your players’ attributes. For example, Cleveland’s team has a QB coach who has a “passing expert” badge. This gives a +1 boost to all passing attributes.

You also have scouts who cover the country by region. Some have boosts in things like evaluation. You can also set your practice intensity and use your earned points on specific things like passing, block shedding and pass coverage. There are five settings for practice: none, light, normal, heavy and extreme. The more intense you get, the more points you get to assign to your practice focus by position. However, the higher the intensity, the more likely one of your players will suffer an injury.

You also earn scouting points every week. You can look at players by region or overall. You can also purchase a national scouting report for $2 million. It’s worth it.

You also need to keep an eye on your finances. If you don’t manage them right, you could go broke — unless you want to use the unlimited funds setting, which is a nice option to have. But the cool thing is you can use your money to upgrade your facilities. There are options for your stadium, training facilities, rehab and transportation. Improving these things can help boost or keep your player morale high.

Player customization can’t be overlooked here either. Not only can you edit their personal info, but the uniform editor is absolutely fantastic. If you can think of it, you can do it. You have almost infinite combinations available. Hopefully, in the future we will be able to download other people’s rosters and customizations. All of this is definitely the hallmark of the game.

There is something relaxing about just watching or coaching your team from the sidelines. You get the nice sideline camera by default, and you can control everything with your mouse — if you are playing on PC of course (the game is only out on PC right now). I enjoyed sitting back in my chair and just watching my franchise games. I played some and coached some. I honestly think I enjoy coaching the most. This isn’t to say playing the actual game isn’t fun, but it feels like this game is more suited for coaching than anything else. This isn’t a huge knock on gameplay, but I do feel like my team plays truer to its ratings this way. 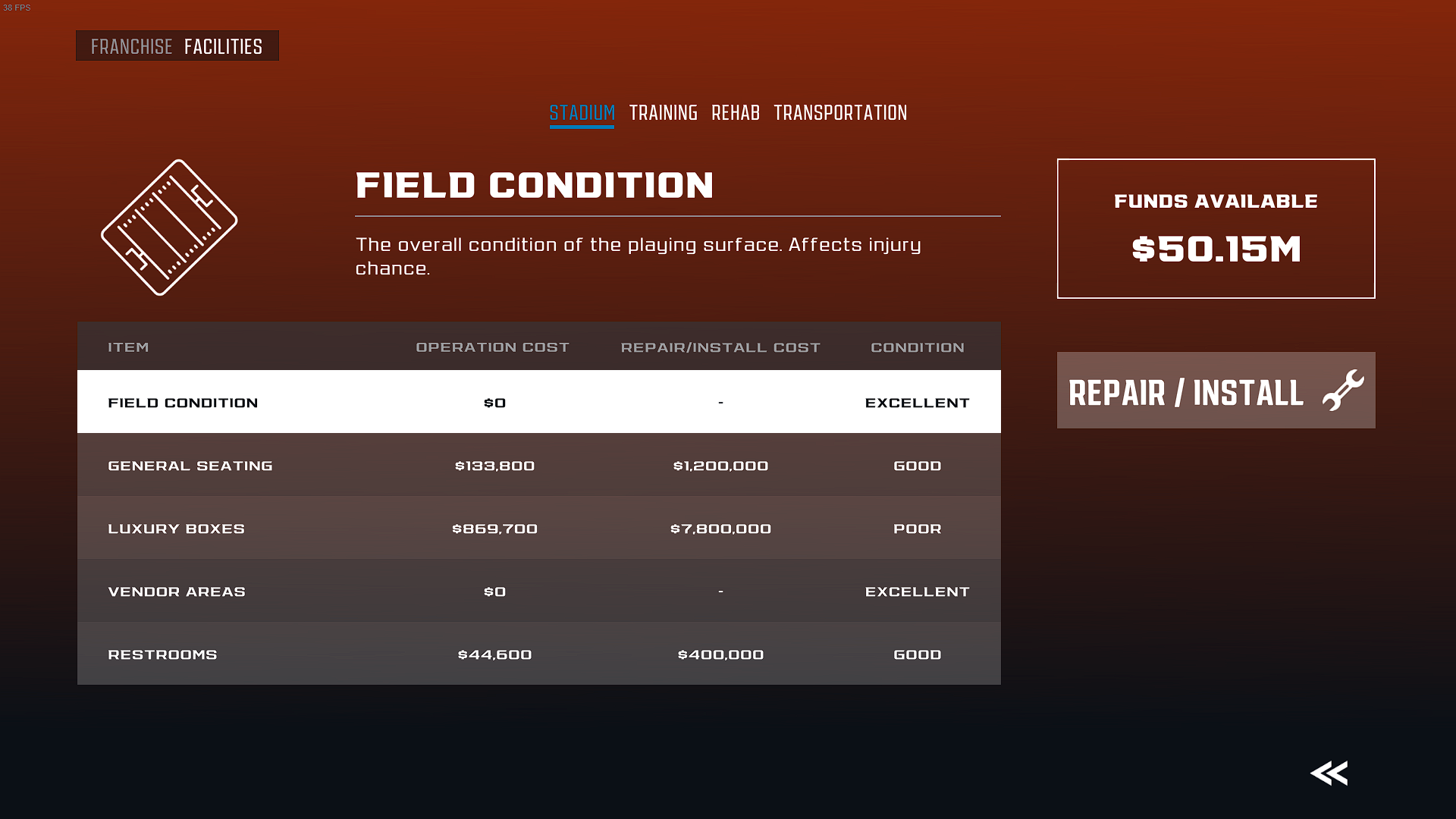 The offseason is another strong aspect of the game. I didn’t make the playoffs and had the third pick in the draft. I took a QB who ended up being a B rating overall. The drafts are fun. There is even a little chime when the pick is in like you would hear on ESPN.

Looking at the season stats for other teams, the best players had realistic stats. The MVP, who was a QB, had a 63% completion percentage, 3,435 yards and 44 TDs. This is a solid set of stats for an MVP. The rookie of the year, who also happened to be a quarterback, threw for just over 3,000 yards and 34 touchdowns. Overall, I was very happy with the season stats.

Progression and regression also seemed realistic. Player progression is based on performance, age, potential and playtime. There wasn’t anything drastic either way, which I’m sure is not easy to program.

Let me preface this by saying I never went into this game and review expecting high-end graphics like I would in Madden. However, I feel like they could be better. Running on the highest settings on my PC, the graphics were not bad, they just need a little boost to make them more realistic.

Up close they look solid, but I feel like they degrade a bit the further back you get. I think the Axis team has improved them every year, and I see no reason why that trend won’t continue. I feel like the developers having such a good foundation when it comes to the off-field part of the game means they could spend most of the resources for next year on graphics and gameplay.

Gameplay — In A Sense

It was hard for me to put this in the dislike part of the review, but just as hard to put it in the like part. Offense definitely seems to flow better than defense. I really like the view while the ball is in the air with passing. However, Axis Football 2020 suffers in the animation department. The animations sometimes just hurt the action and get in the way of smooth gameplay. There are catches in stride now, but they don’t happen as often as they should. This ends up hurting certain passing routes, such as posts where the receiver breaks stride to catch the ball, which makes it easy for the defense to make the tackle or break up the pass.

With the running game, it’s hit or miss. This is in part due to the special moves being scattershot in terms of their effectiveness. In short, they need better animations.

Returning to the passing game, most of the routes can work (in theory). There is nothing that doesn’t work, which is great. Screen passes can be big gainers if you can make a man miss. And the deep ball works, but not in a disproportionate way. 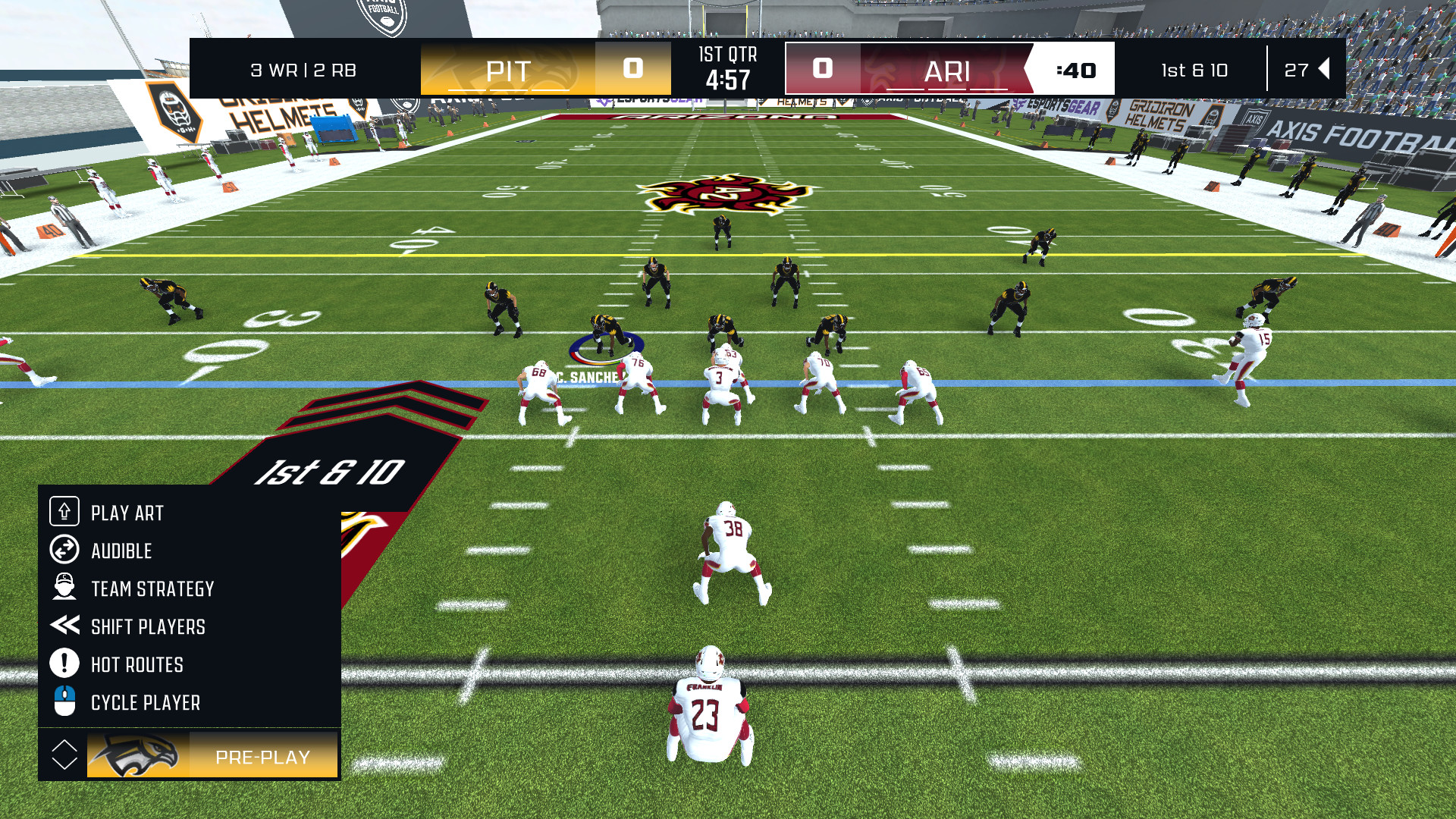 This brings me to the defense. Again, it’s not bad. But it’s hard to shed blocks and play as a user in the secondary. Sometimes I will overrun the ball or miss a tackle because there isn’t much in the way of your player breaking down to make the tackle. You just kind of have to missile yourself into the ball carriers.

There are two-man tackle animations, which can be nice. I think it would be really cool if they could get some gang tackles into the game and maybe stand up a ball carrier and push them back.

Special teams seem to be okay on the kicking front. I enjoy the simplicity of kicking — no need to make it hard. I mean, the players kicking the ball know how to kick a ball. Returns are a little hard in my opinion. In the hours I played, I never returned a kick for a massive gain, although that could have just been my skill level.

I would also like to see a playable sideline camera. I don’t think it would make me better, but I just feel like this game has a sort of Tecmo Bowl feel at times, and it would bring some more immersion to the gameplay.

Lastly, while I criticized the animations in some regards, they are getting better. So, I would expect them to improve in the years ahead.

The stadium graphics are good. I like the variety, although there still needs to be more. But the sound overall still has a lot of room for improvement. Dan Stevens sounds pretty good for the most part, but still just seems to be lacking something.

That being said, I really do like the slick, new UI this year. Still, I think think the overall presentation during games could use some more work. For starters, I would like to see more varied fan reactions. One thing I really want, and have been wanting for a long time in any football game, is if a player breaks through for a big run, I would love to hear the crowd swell much more. 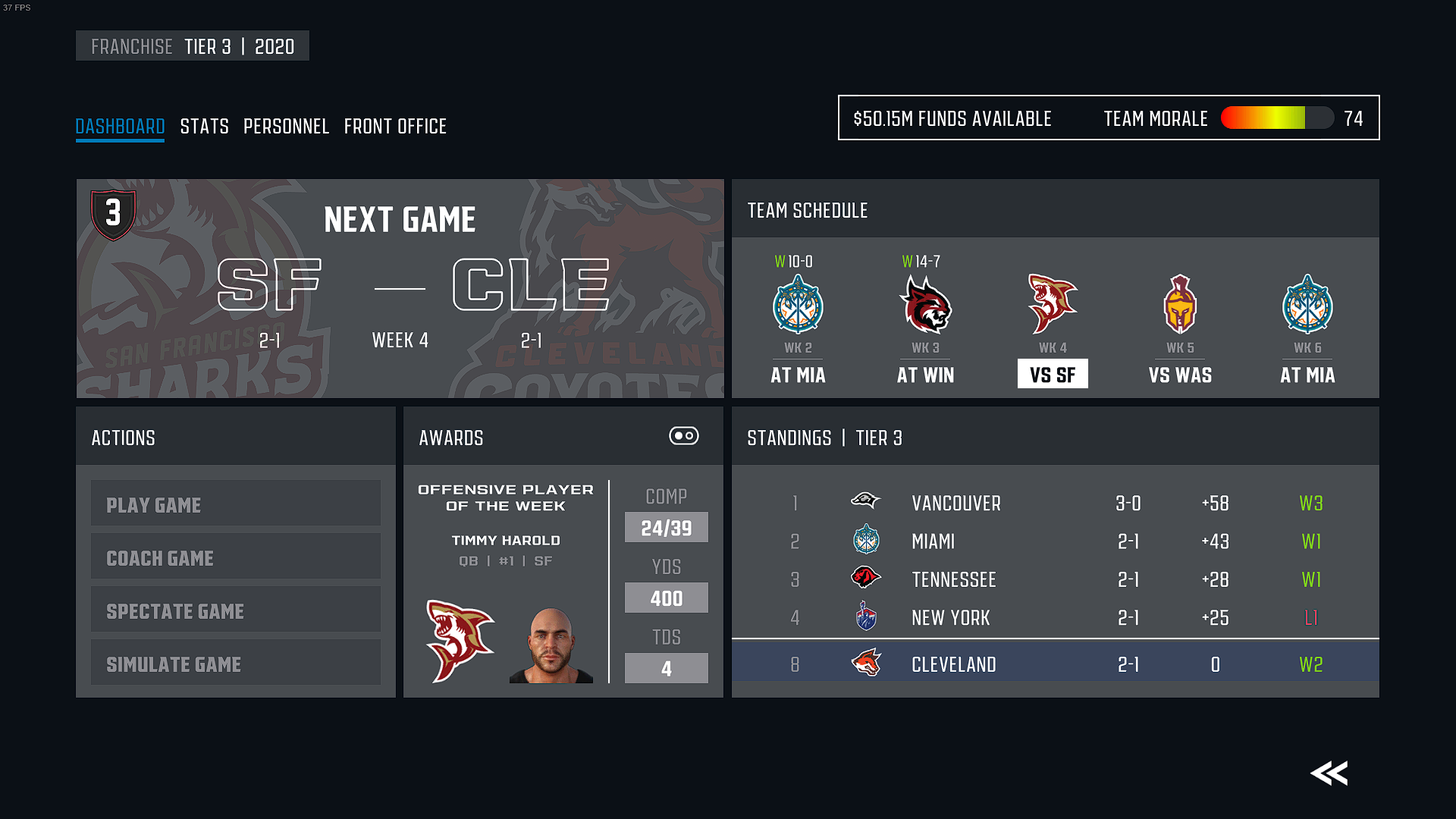 Axis Football 2020 is a good game by a passionate group of developers who just need to keep plugging away, which I have no doubt they will. They are in a good situation by filling a spot in the sports gaming landscape that needs to be filled. Options are always good, even if you are more than content playing Madden.

If you are on the fence about the game, then I would say to give it a shot, especially if you are looking for an immersive franchise experience that includes trades, stat tracking, practice squads and spectating other games that are not your own. While the gameplay and graphics have room for improvement, they are not bad by any means. As I said before, the experience of just coaching or spectating is very fun and also works as a change of pace.

This is easily the best version of Axis Football yet.

You can buy the game on Steam now, and you will be able to buy it on Xbox One at the end of October and the PS4 in November.