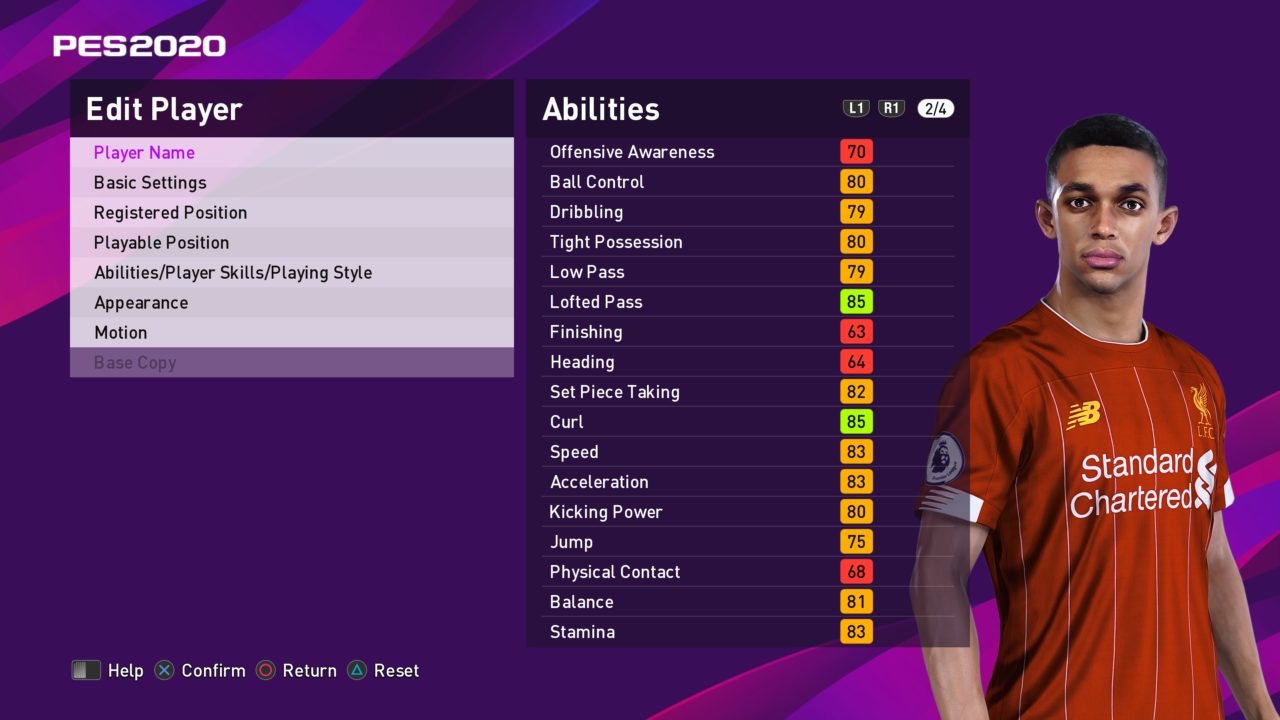 “No one grows up wanting to be Gary Neville.” – Jamie Carragher

Ten years ago this quote from Liverpool legend Jamie Carragher about his former international teammate and Man United great Gary Neville held true, but thankfully the position has gone through a bit of evolution. From out-and-out defenders to players equally adept at attacking and defending, the fullback position is important to your offensive approach and defensive approach. With this in mind, here are five potential fullback targets under the age of 21.

Before unveiling the list, just as we did with the Top 5 Keepers Under 21 and Top 5 Center Backs Under 21, it’s important to understand a few “under the hood” attributes that have a large impact on defenders.

When you think of the “offensive” playing style, think of the modern fullback. It is someone who is adept at defending but also a key cog in the attacking game plan. These fullbacks need to have excellent stamina ratings, as they’ll log some serious miles running up and down the flanks. Once near the opponent’s attacking third, offensive fullbacks need to have a good end product, namely crossing.

Fullback finishers are wide players who often spend just as much time in and around the opposition’s box as they do defending their own. Whether it be whipping in crosses or getting on the end of crosses via back-post runs, these special players skew towards attacking as opposed to their traditional defensive counterparts.

Lastly, “defensive fullbacks” are your more traditional wide defender. With the goal of locking down their flank, defensive fullbacks don’t get forward as often as the two previously mentioned styles, preferring to stay in their own half and leave the attacking up to the more creative players.

Additionally, there are several “playing skills” that are extremely useful in defenders. Some of these are:

In a nutshell, the more playing skills your center back has the better. Playing skills can be acquired through training, match minutes and by a manager who has certain attributes. Having the “man marking” playing skill is a no-brainer if you want defenders who will stick close to attackers. “Interception” is another great skill to look for as it enables your defenders to cut out passes and stop attacks.

With no further explanation needed, let’s look at the top five fullbacks in PES 2020 under the age of 21.

Mykolenko is the first player on our best fullbacks under 21 list. He might have the face of a 12-year-old child, but his skills are way beyond his years. Only 20 years old, Vitaliy still has room for improvement when it comes to developing his strength (68), but his speed and acceleration (82/81) combined with his pinpoint crossing skill mean that he’ll be a terror up the left-hand side. 80 stamina also means that he can play the good majority of matches without a rest.

If there’s one area of his game that is already strong, it’s defense. The “Man-Marking” skill and “Interception” player skills help Myolenko lean towards a defensive fullback. He’s valued at only $6 million, so he’s a steal. If you’re managing a larger club, he’s a great understudy, but for mid-sized clubs he can be your LB for quite some time.

Physically gifted, Deyovaisio Zeefuik checks all the boxes physically. At 6-feet, Zeefuik is imposing in the air (82 jump) while also possessing good strength for a fullback (76). He’s more than just brute strength as he’s pacy (81 speed/80 acceleration), decent on the ball (78 dribbling) and possesses the “Fullback Finisher” playing style.

Sort of a younger Serge Aurier, Zeefuik isn’t very aggressive (68) and is prone to ball-watching with his 68 rated defensive awareness. He’s less pricey with a price tag of roughly $2 million, but Deyovaisio has the potential to be an elite right back if you focus your training on the defensive side of the pitch.

At third on the list, Sofiane Alakouch is a young French-Moroccan right back with pace to burn (81 speed/84 acceleration). Despite being listed as offensive fullback, Alakouch’s defensive skills are nothing to sneeze at. 80 ball-winning and 76 defensive awareness are a solid base for a young defender.

He’s not very impressive on the ball with his mediocre passing skills and 70 ball control, but he has the elusive “Fighting Spirit” player skill. It’s hard to put a finger on what attributes this affects, but for sure they are players you want to have in your team, especially in big games and/or derbies. His price tag of about $5 million is not too bad for a team hovering above the drop that needs quality to stave off relegation.

The second Moroccan to make the list, Hakimi is a highly promising right back blessed with incredible pace (94 speed/92 acceleration) and very solid dribbling attributes (77 overall). It’s that kind of pace that makes him a constant threat on the right side of your team. Once he’s on the ball, he has a full arsenal of player skills ranging from “Cut Behind And Turn” to “Gamesmanship” — an underrated skill that allows him to win free kicks more easily.

Defensively, he still has a lot of work to do, which is part of the reason he’s sometimes played at RM for Dortmund. But some good training focus on that side of the pitch would make him elite and perfect for PES’ propensity for fast-paced counter-attacking soccer. His market value is tricky. He’s on a semi-licensed Moroccan national team so he’s in the game, but because he’s on an unlicensed team (Dortmund) and on loan — a system that Konami still cannot completely figure out — he’s in limbo-land to start Master League. This means you could sign him for cheap (free) or pay up to $20 million once he hits the market.

This shouldn’t come as a surprise. The young English right back has been a standout performer for a few years now. Blessed with a rare combination of pace (85 speed) and technical ability (82 overall dribbling), TAA is the perfect modern fullback. An adept passer on the ground (81 low pass), it’s his crossing ability that puts him tops on this list. Equipped with 87 curl and pinpoint crossing, TAA’s 90 lofted pass is a formidable weapon for any attack that stresses crosses and/or their fullbacks getting high up the pitch.

He’s no slouch defensively either with a solid 81 ball winning rating and 78 defensive awareness, allowing him to not get caught out too often. Already locked up with the reigning European champions, it’s going to take upwards of $80 million to pry him away from Merseyside. $80 million is a king’s ransom so there really are only a handful of clubs that can afford him (Man City, PSG, Barca and Real).

What promising young  fullbacks have you uncovered during your Master League adventures?